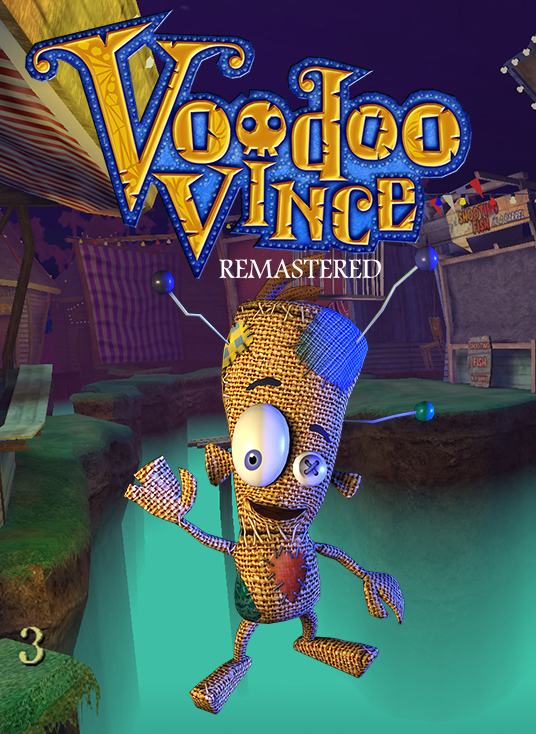 Remakes come in all shapes and sizes, but as a rule they tend to be for higher profile titles.  Voodoo Vince, on the other hand, was a mid-tier action platformer exclusively for the Xbox, and while it did pretty OK for itself at the time the game got lost and almost forgotten over the years.  Creators don’t forget their babies, though, and when Clayton Kauzlaric realized he could remaster and re-release Voodoo Vince he went for it, updating the game with shiny new textures to take advantage of the HD resolution but leaving the gameplay and level geometry intact.  Voodoo Vince Remastered now looks as sharp as can reasonably be expected and runs at a rock-solid 60FPS, making for the definitive edition of a quirky old platformer that deserved better than to be completely abandoned on obsolete hardware.

Vince was little more than a standard-edition voodoo doll, made of patched burlap with a few pins sticking out of his head.  His owner, Madam Charmaine, ran a small mystic shop in the heart of old New Orleans, and her prized magic item was the zombie dust that could bring the inanimate to life.  When Kosmo the Inscrutable’s henchmen kidnap Madam Charmaine and steal the dust, a little spills on Vince to turn him from a doll on shelf into a sardonic platforming hero.  He’s small and unimposing, sure, but as a voodoo doll he’s also immune to most damage and can even route it back to the enemies around him.  Vince isn’t invulnerable, of course, but most deaths will be caused by falling off the world rather than fighting.  Once you’ve got a nice variety of voodoo powers and have the magic supply at a decent level the enemies are just there to spice up the level as the platforming gets more precarious.

Vince starts off with a handful of skills that will take care of him through most of the game.  The double-jump is enhanced with a button allowing for a slow descent, a punch hits forward, and the spin move clears enemies away and adds a bit of air time when used with the jump.  You can go into a first-person view while standing still, and after a few levels Vince is given an All-Seeing Eye that can be activated at the same time to reveal collectibles through the walls.  Collecting 100 pouches of zombie dust gives Vince another pip of life, with the total being carried from one level to the next, while finding all the skull pages on the levels that have them activates an event where you need to chase after a pink skull to earn another pip of magic.  Hearts give extra lives, beads fill up the magic meter, and the pink crystal wand-thing adds a new animation chosen at random when Vince activates his voodoo powers. 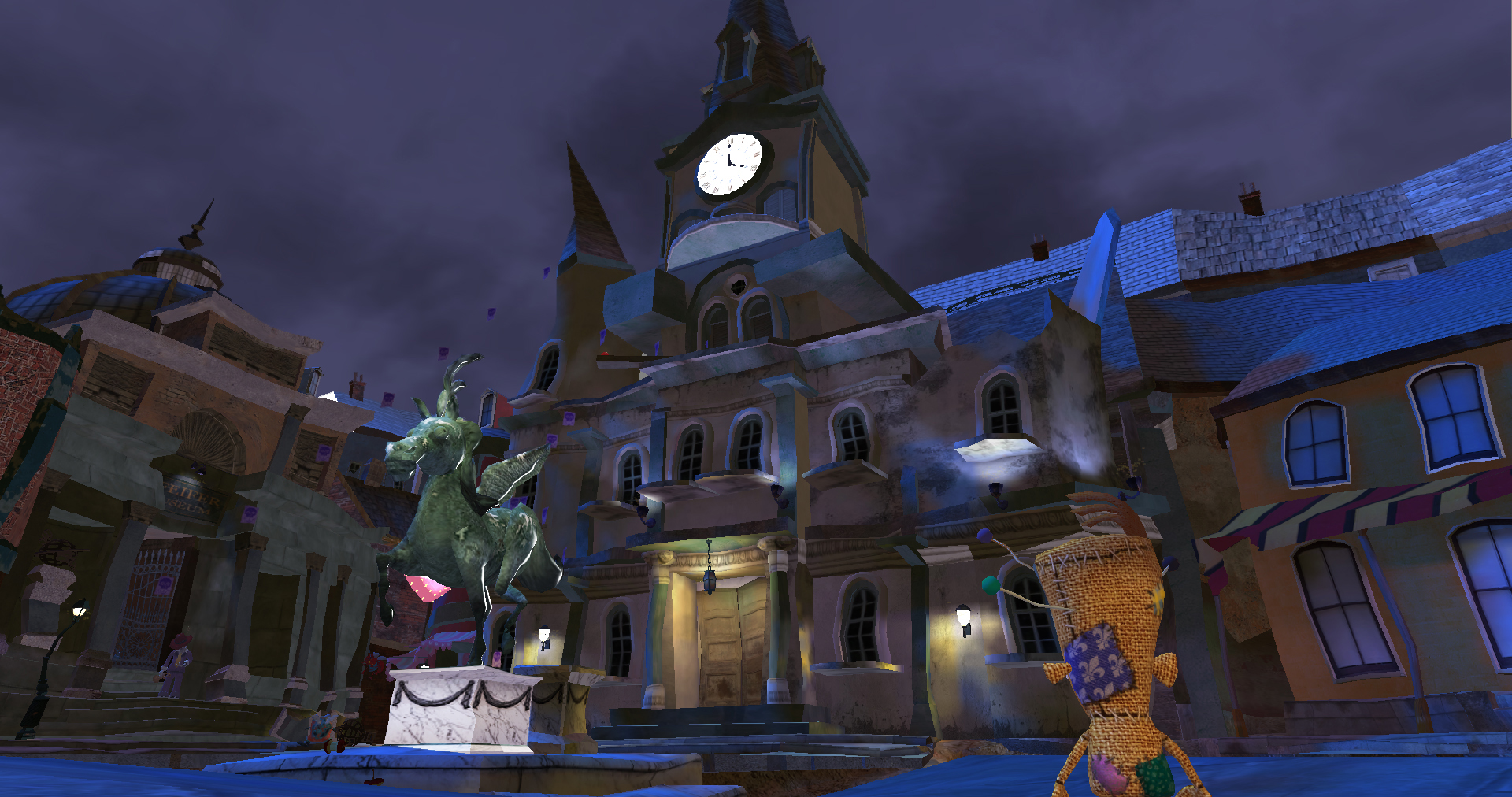 Voodoo Vince’s unique ability is that he can call down an obliterating magic on himself and transfer the effects to everything around him in a limited area for a mass insta-kill.  Destroyed enemies drop beads, beads refill magic, magic enables another spell in a cause-and-effect cascade that’s easy to keep going once started.  If you don’t have any magic then a few punches takes out most creatures, who then drop enough beads to power a single magic attack which, if used right, will prime the metaphorical magic pump to keep the gauge topped off.  The attacks are short little scenes of Vince taking damage, from getting jabbed with his pins, to taking a bath with sharks, to having a giant foot smoosh him flat.  There are plenty of animations to prevent the brief pause in the action from wearing out its welcome, but if you don’t feel like taking the time most encounters can be avoided just by running past.

The platforming is where most of Voodoo Vince‘s challenge comes from, and while it’s fairly easy early on, by the end there’s hardly a solid piece of ground left to walk on.  Dolls aren’t made for swimming, so falling in the water is instant death, and for some reason Kosmo built his dilapidated Carnival DePrave on a few spits of land sticking up from a massive bottomless pit.  It’s a slow, steady progression from safe ground to constant aerial danger, but by the end of the game you’ll need pure platforming skills and good timing to land multiple consecutive jumps on moving targets.  Voodoo Vince may be kid-friendly but it expects them to bring their A-game to see it through.

Which isn’t to say there isn’t plenty to do before the difficulty shows up near the end.  Voodoo Vince was a full-sized console game and has many hours of gaming under its hood if you want to see and earn everything.  Hitting pause brings up a tally of how many of each item are in each level, which when combined with the All-Seeing Eye ability makes it hard to not aim for 100% item collection before moving on to see what comes next.  Each level is different from the last, and while themes get re-used each area is distinct from the others.  One level might be a basically a long corridor with nooks and side-passages to explore, and then the next is a big, open area to explore any way you’d like.  Most levels have a device or two to play with, acting as gates, puzzles, and challenges to get through.  The cannon in the cemetery needs to be aimed just right to fire Vince through the exit, while the later crawdad submarine lets you finally journey underwater.  One level is even a factory with interconnected machinery that needs to be configured right, with belts and pistons all needing to work together to transport the cargo to its destination.  The constant change-ups keep the action fresh, and smaller challenges interspersed with the occasional extra-large area make it easy to keep exploring one more level just to see what’s next. 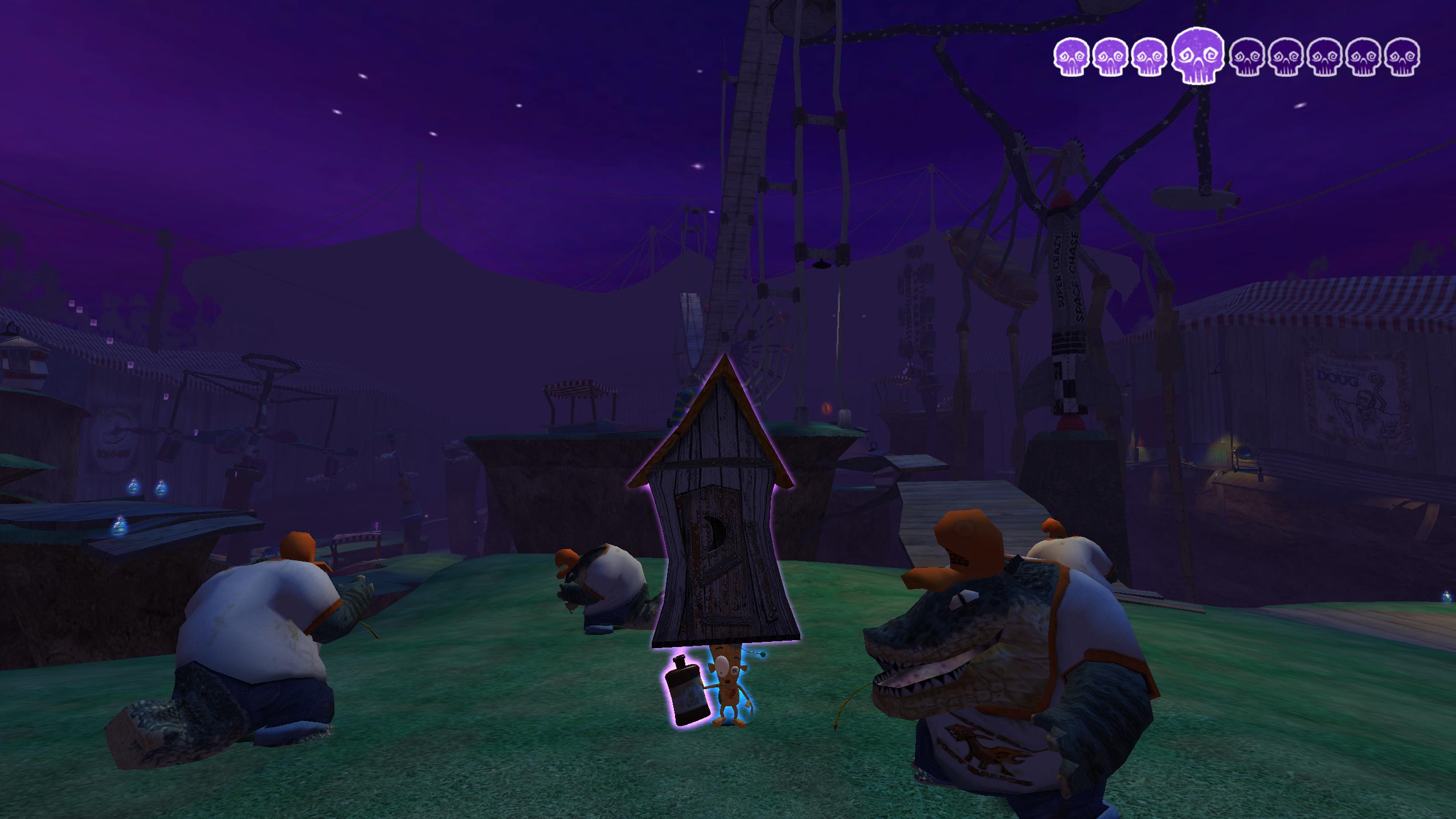 While Voodoo Vince Remastered isn’t a classic of the platforming genre, it’s still very good.  The levels are well designed, the Louisiana setting is unique, and if the humor tends to wander to fart jokes a bit too often, it still manages to be entertaining.  It takes a while to warm up to Vince as a character but he grows on you as the adventure continues, and Kosmo is an entertainingly ridiculous villain.  The kid-friendly tone doesn’t prevent Voodoo Vince from pulling out the challenge near the end, making for a satisfying conclusion to the 8-10 hour journey.  The excellent music in particular deserves recognition for its lively, jazzy tunes, giving Vince a unique and memorable soundtrack.  Voodoo Vince Remastered would be a great little platformer even if it was brand new today, and honestly it’s hard to be nostalgic for something I played once fourteen years ago and only remembered small bits and pieces of.  People who played Voodoo Vince the first time around will have a good time rediscovering it, and platforming fans who never got a chance all those years ago get a chance at a lost console adventure that’s managed to hop its way out of obscurity.