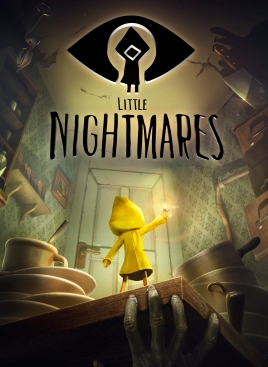 If you’ve ever watched any notable amount of Zero Punctuation videos on the web, then you may have heard about Yahtzee’s suggestion that the fastest track to acclaim on the indie circuit is to make an atmospheric, horror/puzzle platformer game about a small child lost in a big scary world (with the child preferably being big-headed). After all, that was the formula which worked for Limbo when it came out in 2010, and countless indie games since then have used said formula to varying degrees of acclaim over the following years, and continue to use it to this day. And now developers Tarsier Studios have teamed up with Bandai Namco to throw their hat into the small child/scary world ring with Little Nightmares. But does this entry have the skills needed to back up its frightening imagery or will it end up wimping out?

Little Nightmares sees you playing as Six, a young girl wearing a raincoat (and who indeed does have a notably big head) who finds themselves waking up in a massive underwater facility known as The Maw, used for feeding heavy amounts of monstrous, gluttonous guests. Not wanting to be on the menu, Six finally gets the chance to escape, having to move their mouse-sized body through several rooms full of various horrors. Mind you, a lot of the game’s bigger details are either vague or left to the imagination (or don’t get truly revealed unless you go for one hundred percent completion, it would seem), but the game’s world and its inhabitants alone paint a pretty eerie picture as is, and you should be able to figure out the most crucial bits easily.

Indeed, save for a few minor tutorial prompts in the beginning, Little Nightmares doesn’t explain a whole lot in terms of its gameplay as well, but it’s fairly easy to figure out, since the main actions are basically just jump, sprint, crouch/sneak, grab, and turn on a lighter when needing to look in the dark. Your standard setup for a puzzle platformer, and it works quite well, save for the occasional issue with using the right trigger to grab onto something. For instance, sometimes it isn’t clear whether you to simply grab onto a ledge and climb it, or jump and grab, even though the ledge isn’t far up. Other times, the game doesn’t provide you with a clear indication of whether or not you can grab onto something, even if it has a handle or such. Needless to say, this does lead to a few annoyances…and deaths. 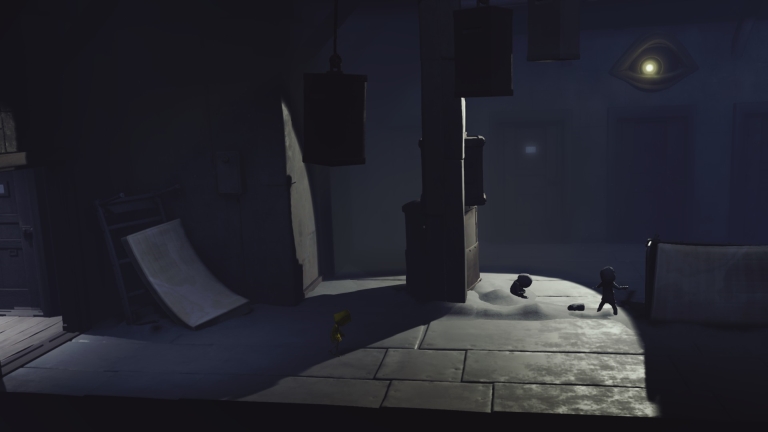 And die you shall, as the game has clearly placed an emphasis on the number of gruesome fatalities it can deliver. It only takes one hit or a nasty fall to end Six’s life, and with a hefty amount of instances where twisted creatures will be hunting you down, you can expect to get offed more than a few times. Most of the time, the challenge level is perfectly fine, but there indeed some instances where the checkpoints annoyingly knock you back quite a bit, which is especially frustrating during those moments where you couldn’t deduce that you immediately need to perform a certain action or run away, especially if it comes at the end of a lengthy stealth section.

That said, the aforementioned stealth sections are nicely designed, requiring you to properly note the routines of each giant before you, note any hiding places, and provide a distraction or two if needed. It sounds standard, yes, but the level design is what makes it work so well. There’s always a decent variety of paths and approaches, and you get a fair chance to escape to safety most of the time as well. The rest of the game’s puzzles outside of the stealth bits are well-designed as well (including a couple of boss battles, even), requiring a fair bit of exploration and having to maneuver objects around in various ways, and things never get frustrating. Well, except for at least one moment where you ponder whether or not the solution you found was the intended one or not. 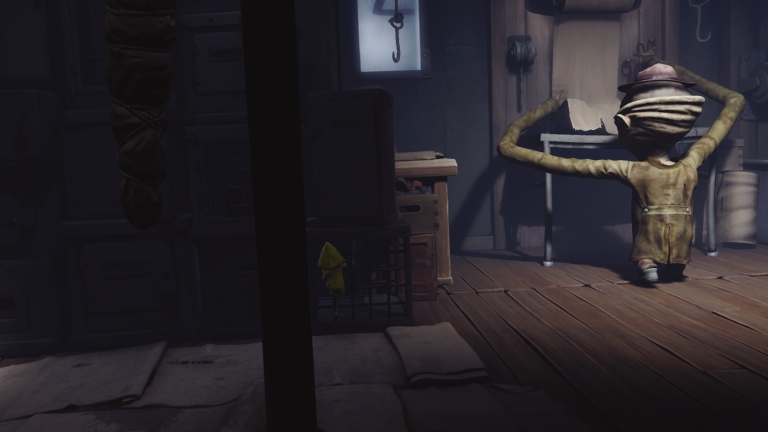 Oddly enough, though, Little Nightmares ditches a lot of the stealth and puzzle elements for the final couple of acts, choosing to rely more on full-on platforming action as you get chased down in auto-scrolling areas. It’s a bit of a jarring, slightly awkward shift, although it still makes for some nicely tense action, and the platforming is still as solid as mentioned earlier. Actually, there are indeed several moments where you have to suddenly deduce the solution to some sort of puzzle before some behemoth catches up with you, or least you’ll always feel like the danger is always there. It does indeed contribute quite a bit to the atmosphere, adding a bit of paranoia and leaving you panicked, but in the fun way.

It may sound like Little Nightmares definitely has some less than refined bits roaming throughout it, but it still comes together to make for some satisfying gameplay. And at the very least, it earns a ton of points back when it comes to aesthetics and creating a universe filled with unique horrors. The monster design is especially impressive, filled with long-armed ghouls and freaky ghost-like beings, but the standouts are the diners and chefs, huge, blob-like monstrosities that shamble about wearing human masks that dangle off of them. You never really know what they are, just that they aren’t human and that they’re out for your flesh, relying on the classic technique of what you don’t see being scarier. 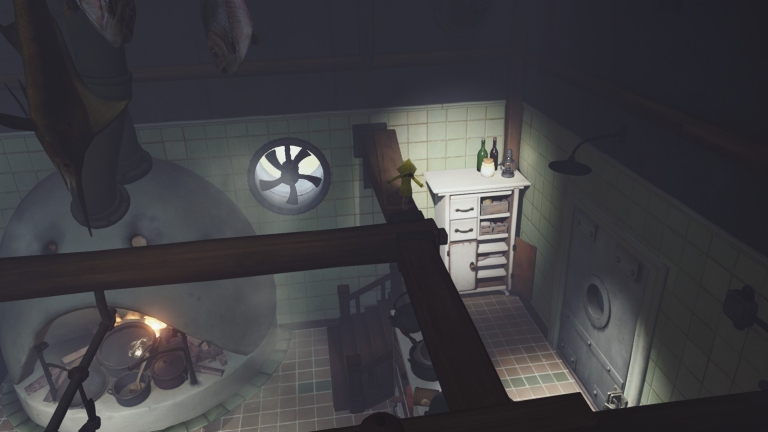 The Maw itself is quite the sight to behold as well. Being the size of a rodent, you have to experience a world of exaggerated proportions, one where eerie toys and huge chunks of meat decorate areas, along with twisted family portraits, books stacked several feet into the air, graffiti warning you of evil eyes, secret passages, and several other eerie sights which all feel normal yet just ever so off in some way. The music is also peppered with appropriately haunting melodies, adding to the atmosphere of a macabre, glutton-fueled nightmare. Unsurprisingly, Little Nightmares does horror superbly overall, save for a couple of forced moments. At certain intervals, Six starts experiencing massive hunger pains, and it isn’t exactly a shocker to think “Gee, I wonder if we’ll have to resort to eating something disgusting or perform a questionable action to advance here?”

All of that said, what will probably indeed be one of the divisive bits of Little Nightmares is its length, clocking in at about a few hours on your first run. Mind you, one could argue that it’s a proper length for games of this nature relying on atmosphere and world-building, but it’s hard not to feel like there isn’t more that could be done at times. Then again, we also haven’t unlocked all of the game’s collectibles yet, which may shine a light on a few things when gathered. You have lanterns and candles to light, little onion-headed kids to find, and Japanese dolls to smash open (it makes sense in context, mostly). It does allow for a bit of replayability, which is naturally always welcome. 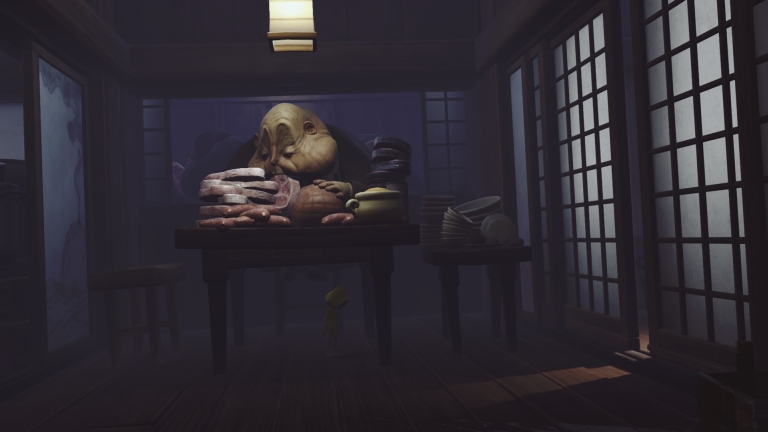 Little Nightmares has its flaws and iffy moments, but when it’s at its best, it creates a tense, nightmarish, action-packed world filled with surreal scenery that contains some classic puzzle design and a host of gleefully creepy characters to chase you all throughout it. It may not break any new ground in the small child/scary world sub-genre, but it still makes for one impressive entry into this world of dark games nonetheless, thanks to The Maw and the unique, twisted visuals it contains. It may be an absolutely horrifying feast that you witness at every turn, but it’s one that’s worth taking a bite out of.