Five Nights at Freddy’s and all its titles have been huge hits. It basically revitalized the jumpscare genre and spawned a huge following of fans. Funko just updated us on when we’ll get to give our collections some spooky additions. Watch out!

There are two boxes with four figures each; one with characters from Five Nights at Freddy’s and the other marks the Funko debut of Sister Location toys. Collect collect Funtime Freddy, Funtime Foxy, Baby and Ballora in one set. Then, pick up deteriorated, nightmarish versions of Freddy, Foxy, Bonnie and Chica. All characters measure 2 inches in height and are stuck in a fixed position. Both sets are scheduled for release in May. 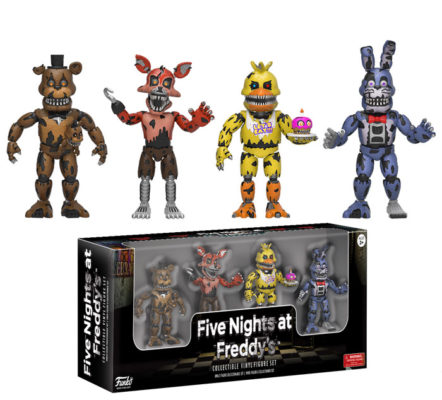 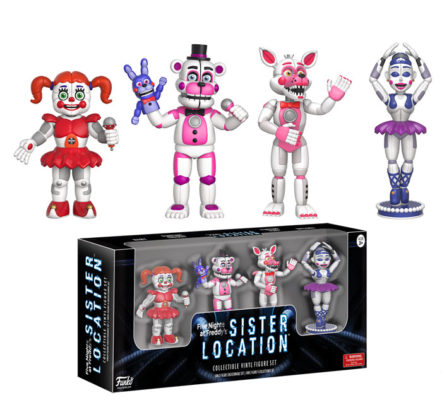 Five Nights at Freddy’s: Sister Location will also receive articulated action figures. You can collect all four characters of Funtime Foxy, Baby, Funtime Freddy and Ballora. Each one comes in their own unique packaging and even come with a piece to assemble and form your own Ennard figure. They are all coming this July.

Then, decorate your desks, shelves and other spots with these tiny Mystery Minis figures. All items are kept in a blind bag with no way of knowing who’s inside. However, visiting certain retail locations can yield different results. GameStop, Walmart and Toys”R”Us will all have special mini figures which are not available anywhere else. These are also coming to stores in May. 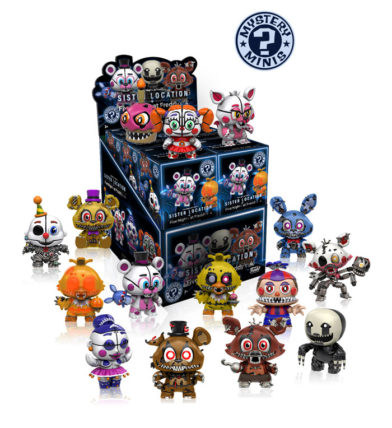 Back in February it was announced these new toys and figures were coming as well as new Pop!s. Take a good look at everything here because this might be the last time you get to see anything, especially if you’re a nighttime security guard at a pizza shop.