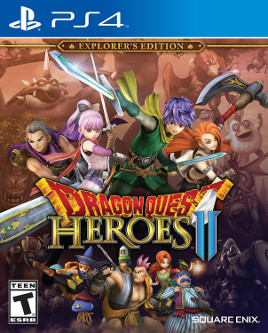 Not long ago one of the world’s most beloved RPG franchises tried to make it as a hack and slash action gamer and the results were amazing. Dragon Quest Heroes was not a title Dragon Quest fans would have predicted prior to its announcement, but this title was able to maintain many RPG elements with the charm of Dragon Quest and successfully merge it with the gameplay of Dynasty Warriors. Dragon Quest Heroes II attempts this formula once again, creating a brand new world for new and familiar Dragon Quest characters to come together and defeat some malevolent threat to the world.

The story begins with a reunion between heroes Lazarel and Teresa in Harba, though their reminiscing is cut short due to a surprise invasion from another land breaking a long standing thousand year peace in the Seven Realms. After the fighting the heroes are met by Desdemona, a powerful warrior who has some amount of clout with the King of Accordia, and the three begin their journey to Accordia to get to the bottom of the invasion. Being a Dragon Quest game, the relatively quick journey to get answers is only the first stop in an adventure that will take the heroes to many diverse locations and meet many displaced Dragon Quest heroes from other games who are confused as to what world they are in and how they got here. The plot is slowly unraveled throughout the game, and is done so in a manner fitting of a game that bears the name Dragon Quest. The story might not be told in such a drawn out and nuanced way as it would be  in a mainline Dragon Quest game, but doing things that way would likely belabor the point in a more action oriented game such as this. 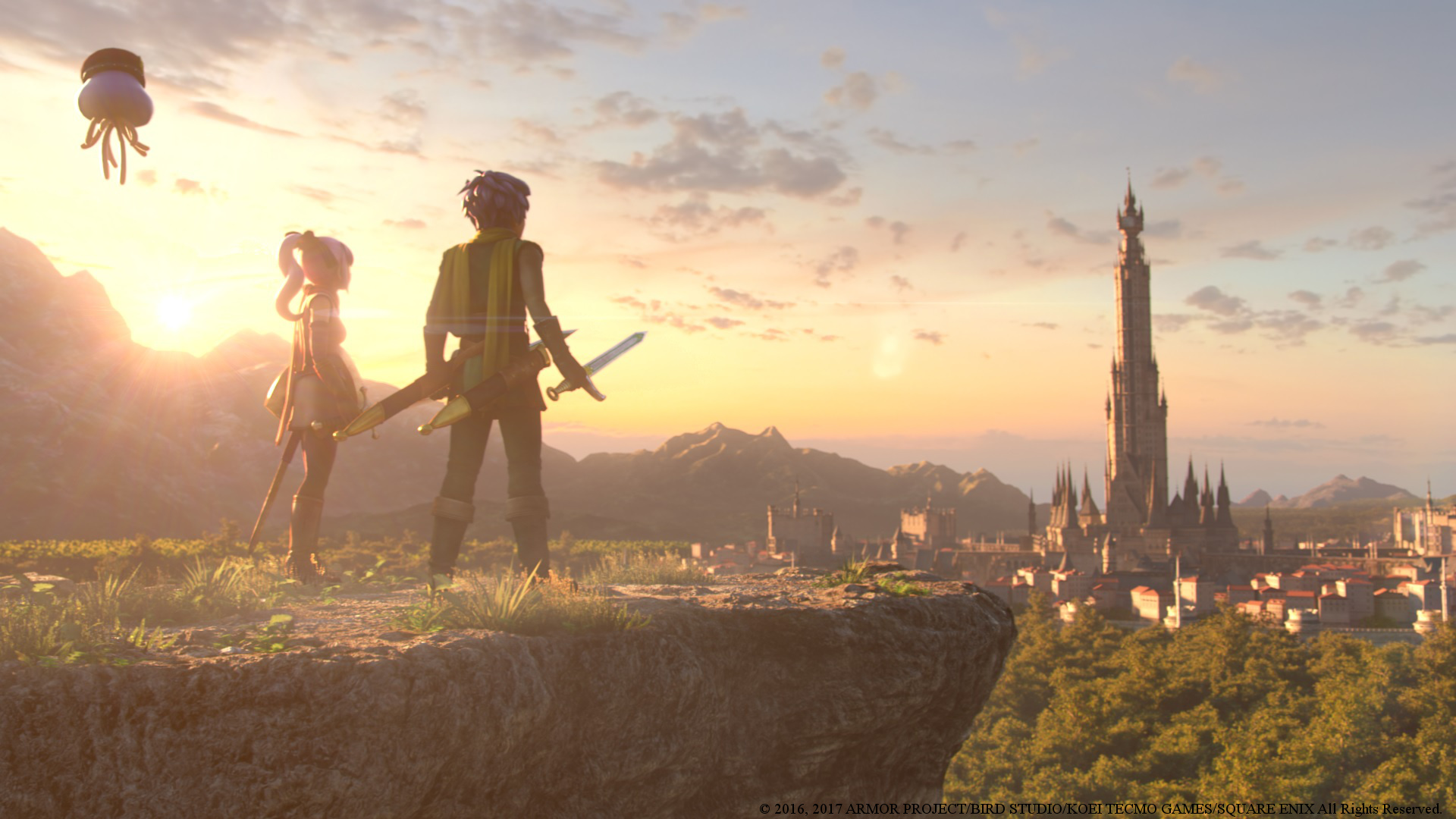 The roster of playable heroes is not the only thing that changed in this sequel. Like the original, the player has a choice between choosing a male or female hero, Lazarel and Teresa respectively, and also like the original their main differences are cosmetic, Lazarel begins wielding two swords and Teresa has a sword shield. This can cause a conundrum for players who may prefer one hero but like the other one’s weapon choice. Unlike Luceus and Aurora who are stuck with their assigned fire or ice elemental attacks, the weapon preference doesn’t matter after Alltrades Abbey opens up early in the game. The two begin as Warriors but the player can change the two main heroes’ class by visiting the Alltrades Abbey from Warrior, Marital Artist, Priest(ess), Mage and Thief. Each class has its own skill set and group of weapons to choose from, and each class gains levels independently from each other.

In the same vein as leveling up classes, each character will gain proficiency with a specific weapon type by visiting a trainer in Accordia. The player has some choices in what weapons can be equipped by each class, the Thief class for example can choose between whip, bow and arrow or claws, but they will only improve their skill with the weapons they equip. Gaining proficiency in a weapon will increase stats when using that weapon and unlocking new moves. 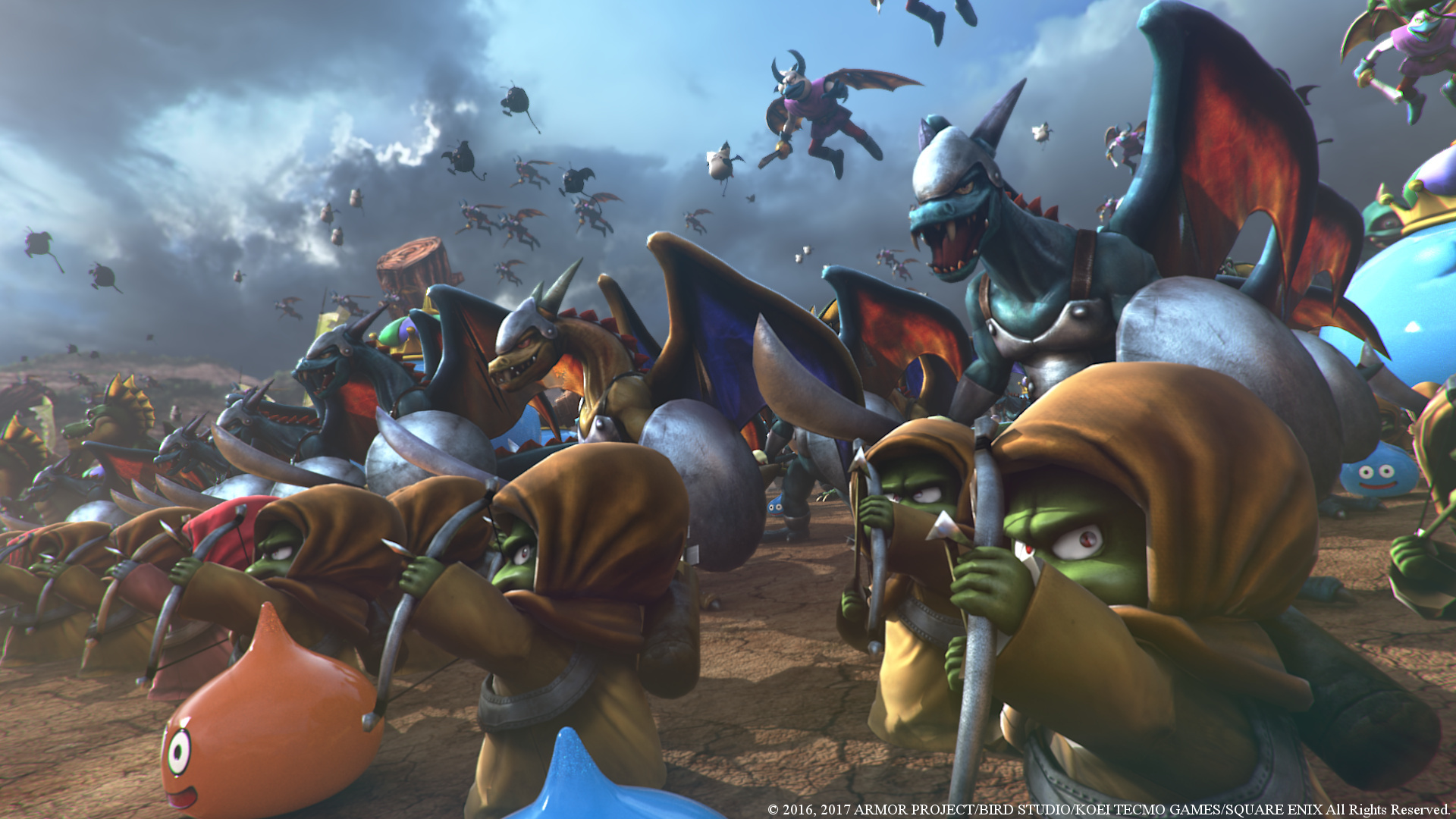 The Monster Medal system has returned in Dragon Quest Heroes II with some tweaking. There are three distinct types of medals that defeated enemies drop, Savior, Sentry, and Substitute. The first two are familiar to returning Dragon Quest Heroes fans, Saviors are monsters that when called forth complete an action and vanish while Sentries will patrol the area and fight enemies until they are either defeated or the player dismisses them. Substitutes are a new feature, and these are monsters that the player transforms into when utilized. The usefulness of each substitute varies, but during the review none of them proved to be unenjoyable. There is just something inherently fun about flying around as a Chimera setting hordes of enemies ablaze or charging into a crowd of monsters as a Grim Rider.

A feature that was absent in the predecessor has been added to Dragon Quest Heroes II, and that feature is multiplayer. Multiplayer is not accessible until the player reaches level three and has had an audience with the King of Accordia. Multiplayer is online only and supports up to four players. The multiplayer mode allows players to run through special dungeons that are filled with many powerful monsters to battle or join up with other players to tackle story missions. The lack of couch co-op is disappointing since fans of Dynasty Warriors formula know how enjoyable those games can be with a buddy, but the inclusion of multiplayer for both dungeon crawling and story mode is a very welcome addition to Dragon Quest Heroes II even if it is limited to online play. The themes of teamwork and friendship have been common in several Dragon Quest games, so the decision to make the game a more social experience is not only practical due to the type of game this is but also fits on a thematic level with the series. 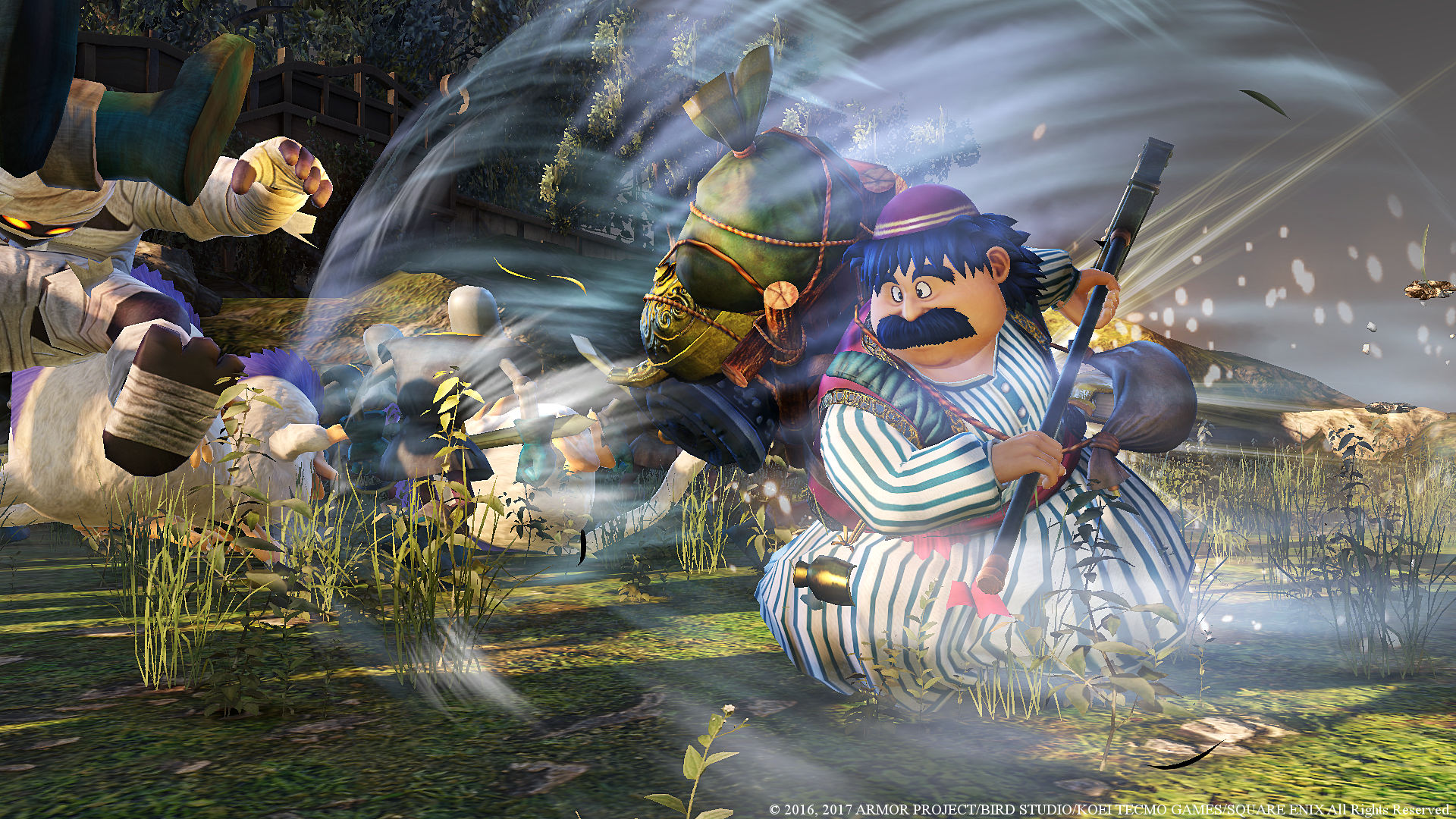 Much like its predecessor Dragon Quest Heroes II succeeds at perfectly melding the extremely different styles of Dragon Quest and Dynasty Warriors. Playing any battle makes this instantly apparent that this is a Koei Tecmo game, but the character designs of Akira Toriyama and recognizable music by Koichi Sugiyama make it just as clear that this is a legit Dragon Quest game. Accordia serves as the central hub for adventure where the player can travel through one of several gates to go to an area or use the Zoom spell to return quickly to any activated Zoomstone. Accordia is a typical RPG town, players can purchase equipment, take on quests, manage their party and classes. There is a crafting station where various items can be augmented or created. Each character has a well developed skill tree and is awarded skill points with each level to allocate to increasing their stats or unlocking new abilities. The safety provided by Accordia makes it an ideal place for management of the RPG elements of character and party building as spending a few extra minutes on character tweaks can have a drastic impact on the battlefield. Leaving Accordia is when the RPG character management gets tested in a frenetic battle against hundreds or thousands of Toriyama’s recognizable monsters.

The areas outside of Accordia are vast open areas to explore. They can vary from deserts to dense forests to open green plains. These areas are filled with familiar Dragon Quest monsters and often contain restricted areas that are only accessible after getting a certain party member or reaching a certain point in the story. The enemies in these areas will sometimes ignore the player, so there is some freedom to explore without having to constantly slay an onslaught of several hundred creatures. Entering into Battles is how the story progresses, and these are activated by reaching a certain point on the map after talking to someone because that’s a somewhat standard thing for RPGs. The Battles are quite epic in scale and can feature some challenging boss fights, the use of four Yggdrasil leaves and the constant heal slim companion Healix do make things a bit more manageable. Some Battles do require that a central figure be defended, which can get frustrating sometimes because the people who need to stay alive do not always have a strong self preservation AI (artificial instinct) but tenacity and some slight strategic revisions make it so no battle is impossible. And this wouldn’t be proper Warriors style game if there was no special charge attack. In Dragon Quest Heroes happens when a character’s tension is full, this is when they can enter high tension mode where they are immune to damage and can cast spells without consuming MP. At the end of high tension they unleash a devastating area attack. 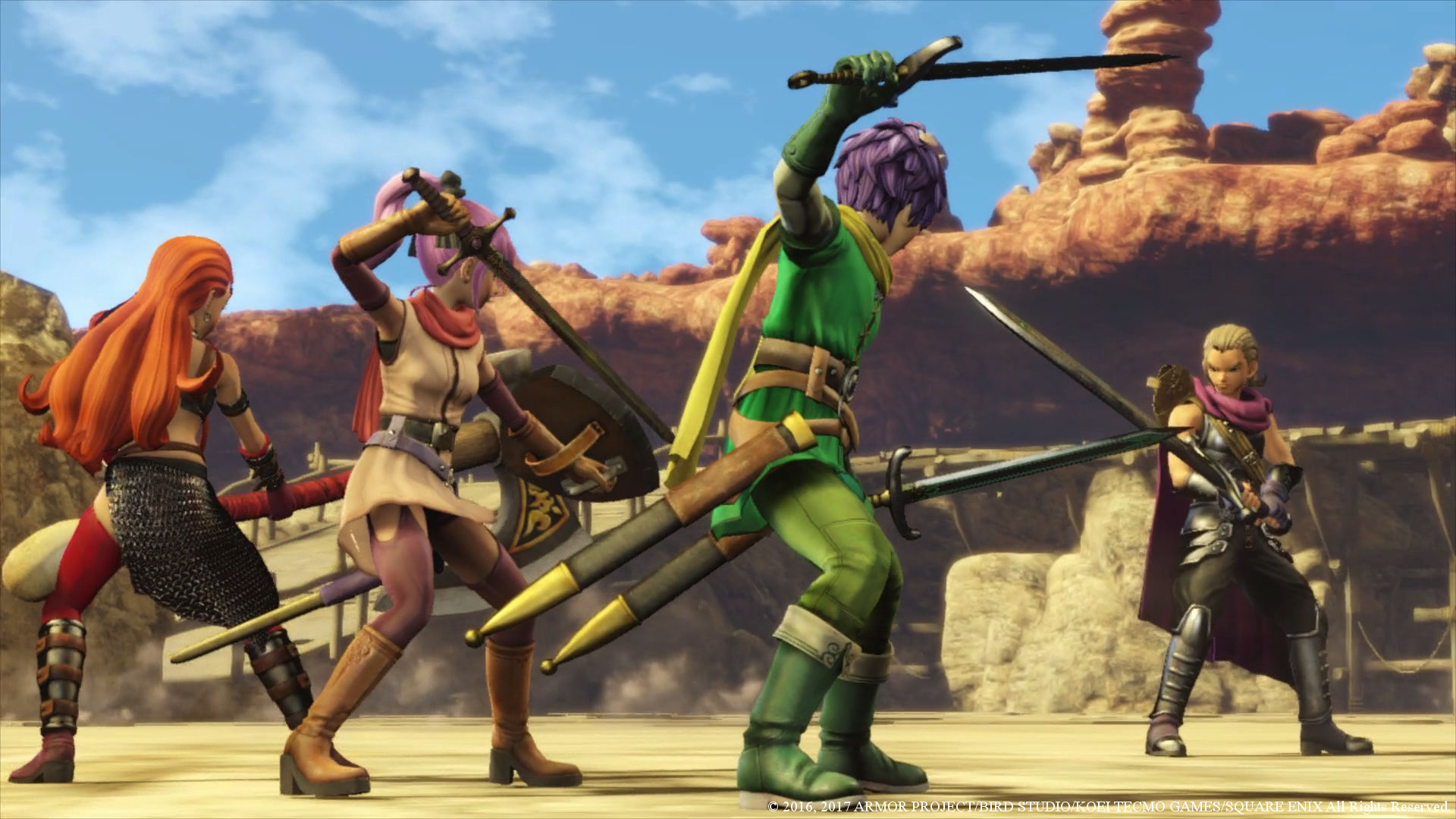 PlayStation trophies and Steam achievements can be enjoyable things to pursue but the majority of time they offer no real reward related to the game. The creators of Dragon Quest Heroes II wanted to reward players for success so in Accordia there is a kiosk where players can view their achievements and receive awards, typically mini medals that can be exchanged for rare and powerful items. There are also small loyalty rewards given to players who have data from the other Dragon Quest spin offs on their system, Dragon Quest Heroes and Dragon Quest Builders. These are the costumes for Aurora and Luceus and the Dragon Quest Builders Mallet, which is a powerful axe class weapon, at least for some of the early battles.

In regards to graphics and sound Dragon Quest Heroes II is a beautiful game. Seeing classic monsters that were introduced as static 2D sprites come to life as vibrant 3D creatures is a glorious sight to behold, and hearing the original chiptune compositions from the NES days reworked into high quality symphonic pieces can make one wish that video game soundtracks were as easy to purchase as film scores. Battle controls are amazingly intuitive and easy to use. Each character can have four different spells or special abilities equipped. In the heat of battle the player just needs to hold down a shoulder button to open the spell menu and press the appropriate button to use whichever ability they want. This control feature allows the incorporation of the options found in turn based RPG battle menus without having to slow down the action. 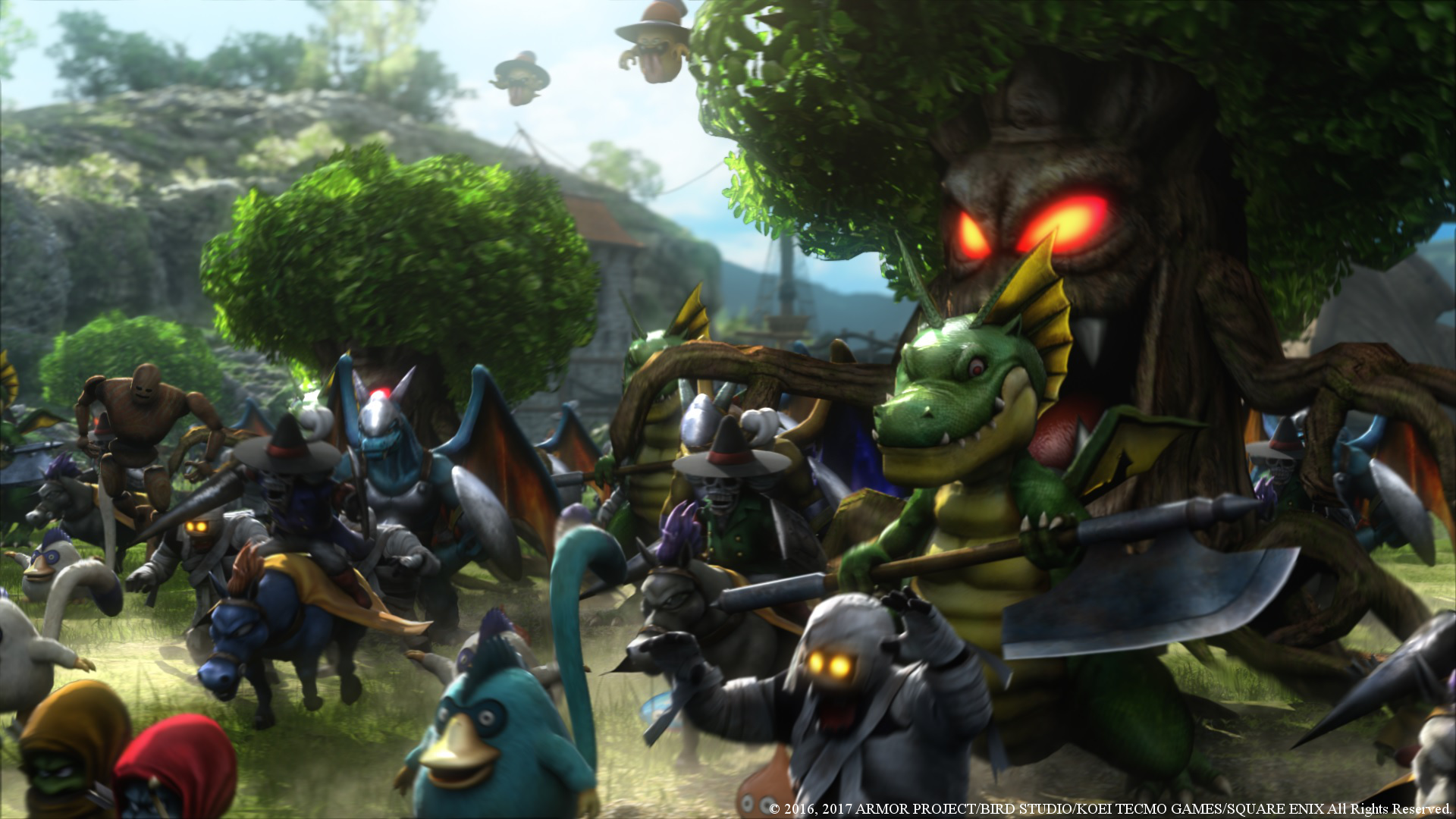 Dragon Quest Heroes II delivers what a fan would want from a sequel, which in this case is more of the same but with some additions and improvements. The original Dragon Quest Heroes was described by many as a love letter to Dragon Quest and that sentiment is just as true in the sequel. Dragon Quest Heroes II maintained what made the original great, but the addition of character class customization for two main heroes, multiplayer and the ability to temporarily transform into some of the enemies are a few of the ways it was able to improve on the original. Taking place in a new world with a mix and new and returning characters help make the sequel a distinctly unique experience over its predecessor. Due to the nature of the type of game this is, its gameplay can get repetitive, but that can be said of all Dynasty Warriors games of their spin offs. The absence of local co-op is noticeable, but the inclusion of online shows the developers did listen to player feedback and worked to make improvements over the original. Dragon Quest Heroes II is overall an improvement of the original and one of the better Warriors style games on the market. Dragon Quest and Dynasty Warriors seems like an odd combination, but the team behind these games shows that it works and hopefully this is not the last we hear of Dragon Quest Heroes.