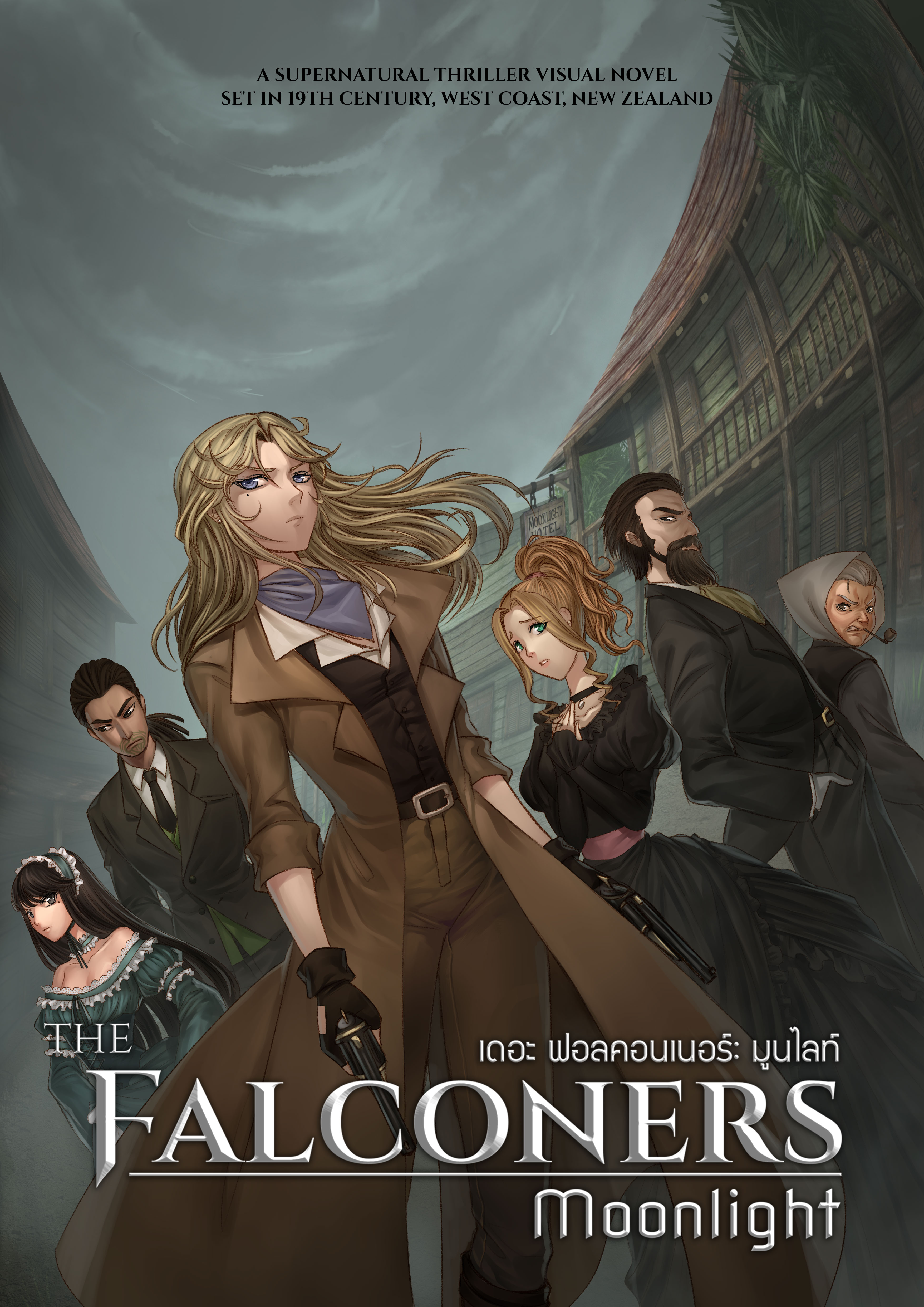 Much of the focus of visual novels on Steam falls into the categories of romance and/or fanservice. That’s not to say more serious tales aren’t available – they simply get overshadowed by the former. The Falconers: Moonlight is a new thriller with a fair bit of action and fantasy thrown in for good measure. The storyline immediately throws players into the fray. In its opening scene we see a woman crying and full of rage. Players are barely able to process this before something unknown snaps her up and carries her away. As it turns out, this is just the latest of mysterious disappearances in the small mining town of Moonlight. Not only have they suffered over a dozen of these disappearances until now, they’ve also recently dealt with the death of over sixty people in a mine shaft due to an apparent accident.

Things just aren’t looking up for this humble town. As such, the mayor George Moonlight has called in a Falconer. Falconers could be considered a brand of supernatural FBI. Their goal is to come into situations where monsters are at play and stop them by any means necessary. While George knows something about the otherworldly nature of his town’s trouble, the townsfolk themselves are mostly in the dark. The Falconer who turns up to help is Cassie Winter. She’s done a lot of work and study but, up to this point, has never worked on a solo mission. Fortunately, she’s trained well and has the skills required to complete her task. Where she simply isn’t quite ready is in regards to managing townspeople. How should she talk to someone in order to get the answers she needs without revealing too much? It’s up to the player to balance her personal skills.

As with many visual novels, players are given options throughout a playthrough. Most of these come in the form of dialogue choices when interacting with the locals. You must decide whether to play Cassie as a no-nonsense Falconer or as a friendlier one. At times you can opt to tell someone more than they need to know in hopes of gaining extra information. In other instances, you’ll need to make life and death decisions. Drama takes hold immediately in The Falconers: Moonlight and almost never lets up. The approximately two to four hour playtime absolutely flies by. There’s also room for additional playability by checking out different choices and working toward the other two endings. 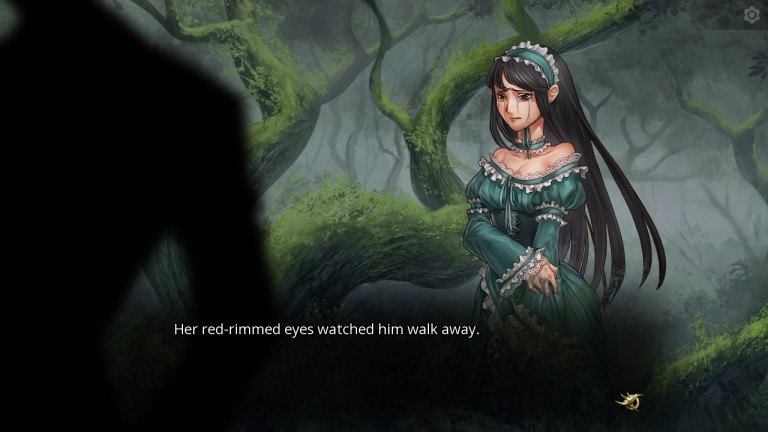 Everything flows thanks to skillful writing. From the moment Cassie enters the town she is met with a handful of superb characters. There are folks like the barkeep who is so pleasant that people call her Sunshine. Then there’s an old woman nicknamed Bitty due to her incredibly rough, perpetually drunk temperament. Each person has their theories about what is going on and who is responsible. Much like a real town, everyone also has their own alliances and personal grudges. For example, Biddy has a long history with George which makes her absolutely detest him. Flourishes such as these make the characters feel much more believable. It appears like Cassie has truly stepped into a living town rather than onto a movie set.

Not only do the characters feel real, but you’re also likely to end up caring for them. That is an extraordinarily impressive feat for such a short visual novel. The situation is deadly and cause for ample tension. Will this person die? Is this character actually working with the enemy? At multiple times throughout the story, The Falconers: Moonlight tries to push your thoughts toward false leads. It worked successfully for me, as the reveal came as a surprise. Once everything is revealed the story kicks into overdrive. 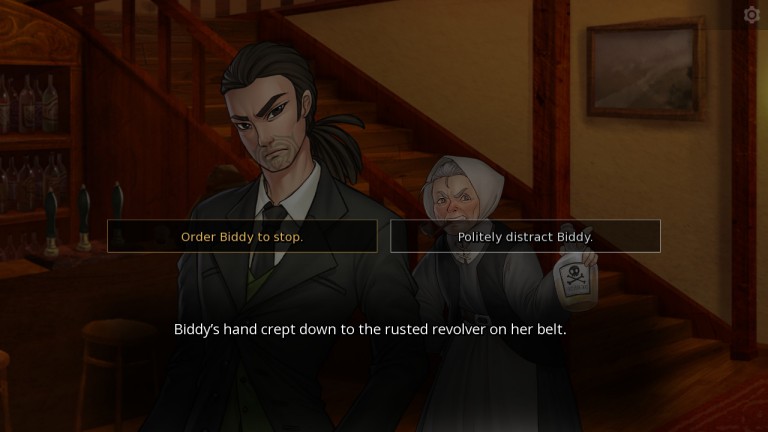 Graphically, this visual novel stands out well against its contemporaries. Instead of bright, colorful artwork we’re given a more subdued art style. In many ways it comes across much more like a graphic novel than an average anime series. Women aren’t sexualized and men aren’t hulking muscle beasts. Instead, everyone looks pretty average and downtrodden. Action sequences come to life as the camera pans across gorgeous artwork. Sound effects fit in quite well, too. There is unfortunately no voice acting, as that could have made things even more immersive. As for the music, it’s great when it plays. For some reason there are many times that the game is completely silent outside of sound effects. Instead of enhancing the tense atmosphere the lack of music comes across as a mistake.

The biggest negative of The Falconers: Moonlight has nothing to do with flawed audio decisions. It all rests on the fact that the game is just so short! Cassie is an intriguing character and watching her grow as a Falconer seems like it would work perfectly with a series. Even giving the game a subtitle of “Moonlight” suggests that future The Falconers games are coming. However, at this point the developer have not shared whether this is the case or not. For now, this is a single game and not a series. It would be a shame if this is Cassie’s only adventure. 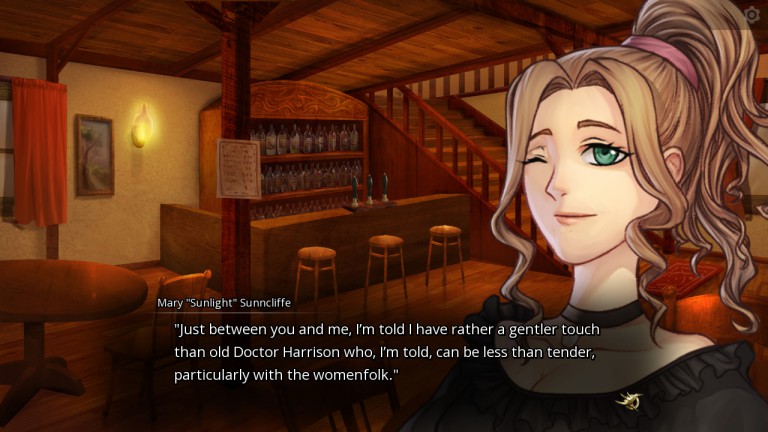 The Falconers: Moonlight is an awesome debut for developer Bionic Penguin. Sure, it does show its indie status at times with a small intermittent soundtrack and lack of voice acting, but the pitch perfect writing, scenario and visuals pull things together in spite of a few missteps. From start to finish players will find themselves hungry to uncover what’s going on. Cassie and the rest of the crew ensure that there’s never a dull moment in the story. The heavy amount of player choice in such a short game also ensures that even non-visual novel fans can have fun playing. If you have a few hours free and are looking for a good story, check out The Falconers: Moonlight.