There’s a strong difference between the American and Japanese style of music games, with the US version being more about recreating the feel of an instrument and Japan getting playful with the structure.  Rock Band and Gitaroo Man are both incredible games, but they approach the idea of how to play with music in very different ways.  Airtone is a Japanese music game designed specifically for VR that showed up a few months back, and its stream of videos has shown the rough idea of how its music/rhythm gameplay is structured.  Now it’s got a closed beta, however, so instead of looking and hoping that Airtone can hang with the best of the genre it’s time to go hands-on and find out.  There are a good number of pieces necessary for a music game to work right, and even in its current beta state Airtone feels excellent.

The base game is pretty simple overall.  You fly down a tube as notes stream towards you and need to use the motion controllers to hit the markers to the beat.  For most of the notes, “hit” is literal.  The yellow notes need to be smacked with the controller on the way by, and just holding in position waiting for it to pass counts as a miss.  Green notes, on the other hand, you can wait for, and they’re dispatched with a pull of the trigger.  Pink notes are sustains, where you hold down the trigger and trace the path down its length, and the rainbow notes are long sustains usually using both hands to trace a flowing path through the sky.  The tube is just a series of lines heading off into the distance, with the notes strung along it as you barrel down the track, and  while on Basic all the lines are straight the second you hit Normal they start arcing across where the tube’s surface would be if it wasn’t invisible. 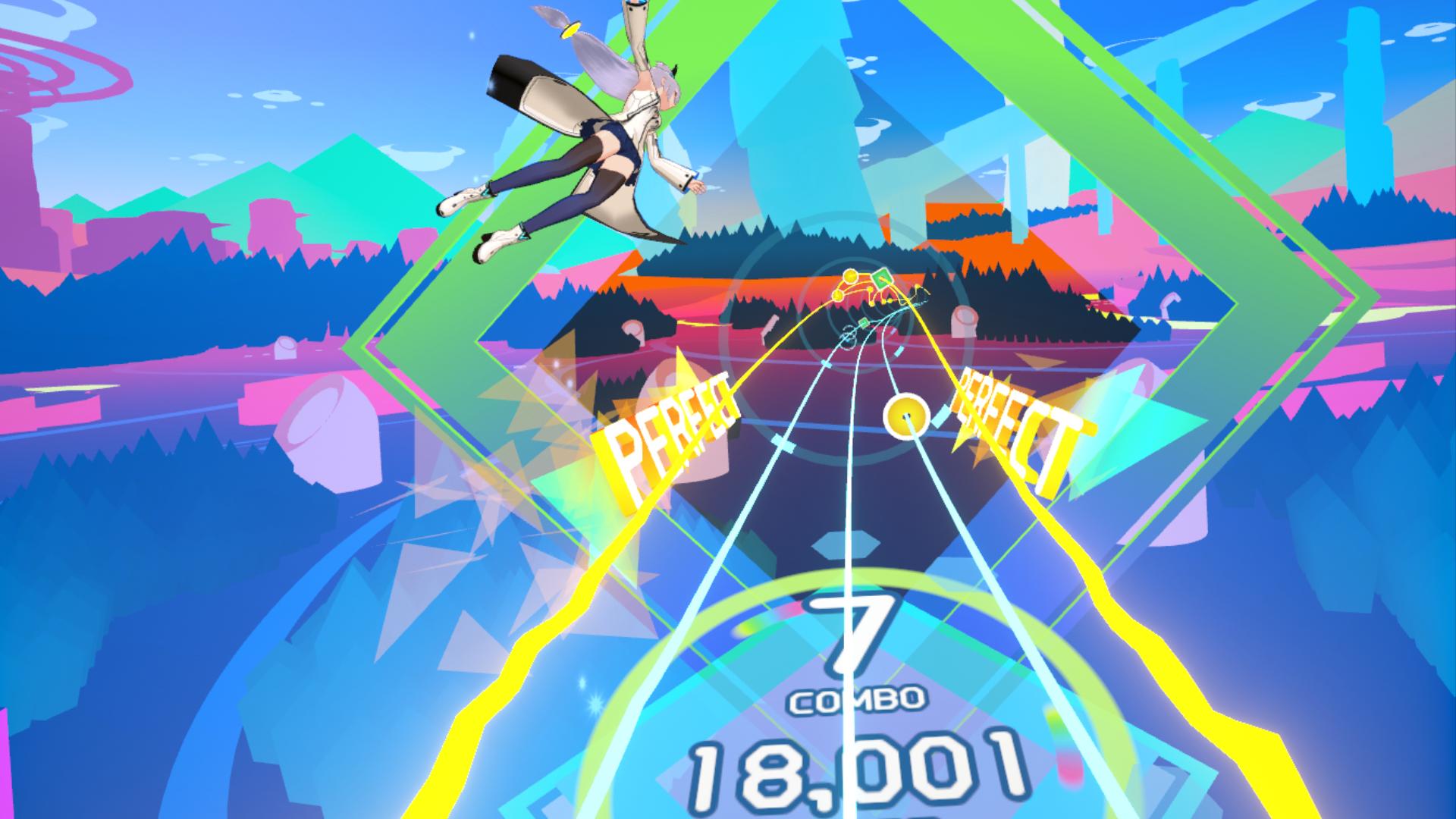 Basic is a nice little thing for training, and useful for hearing a song the first time.  It’s good for a bit of practice and nailing a perfect SSS ranking while getting a sense of the song’s beat and structure, plus you can earn extra goodies from a strong performance.  The notes stream along at a mellow pace in a straight path and the tube is only filled in on the bottom half, with five spots for the notes to go.  Medium is where Airtone starts showing its teeth, when the path can bend and dip, all eight spots on the tube being used, and multiple kinds of beats intermingling.  The game doesn’t care if you pull the trigger on a yellow note so long as you hit it, making it easy to activate a two-note pair of green and yellow by hitting and clicking with both hands, but when you’ve got a long pink sustain occupying one hand while a series of yellow and green notes run parallel it can get a little tricky.  Airtone also isn’t shy about the speed at which you’ll need to hit the notes, and while there’s a good flow to the tracks it can take a couple runs through to get a sense of how things fit together.  Put some practice in on a harder song and it actually counts as exercise, steaming up the VR headset as you heat up from the movements.

As you fly down the path you’re accompanied by the lady android Neon, and between one song and the next you end up in her room.  As the game begins you see a cute robo-doll, and it turns out that you’re controlling it to interact with Neon and her world.  Neon’s room starts empty but, as you complete songs with a decent grade, you unlock toys and decorations to play with between levels.  I managed to unlock a few non-interactive decorations plus a balloon gun and another device that leaves large glowing paths in the air like a dispenser for neon toothpaste, and while there may have been more goodies they were locked behind the Hard songs where mortal man dare not tread.  The six-song beta was the start of the game, three note tracks for Basic/Normal/Hard per song, and with 25 songs planned for the full release (plus DLC music) Neon’s room should fill up nicely before the end. 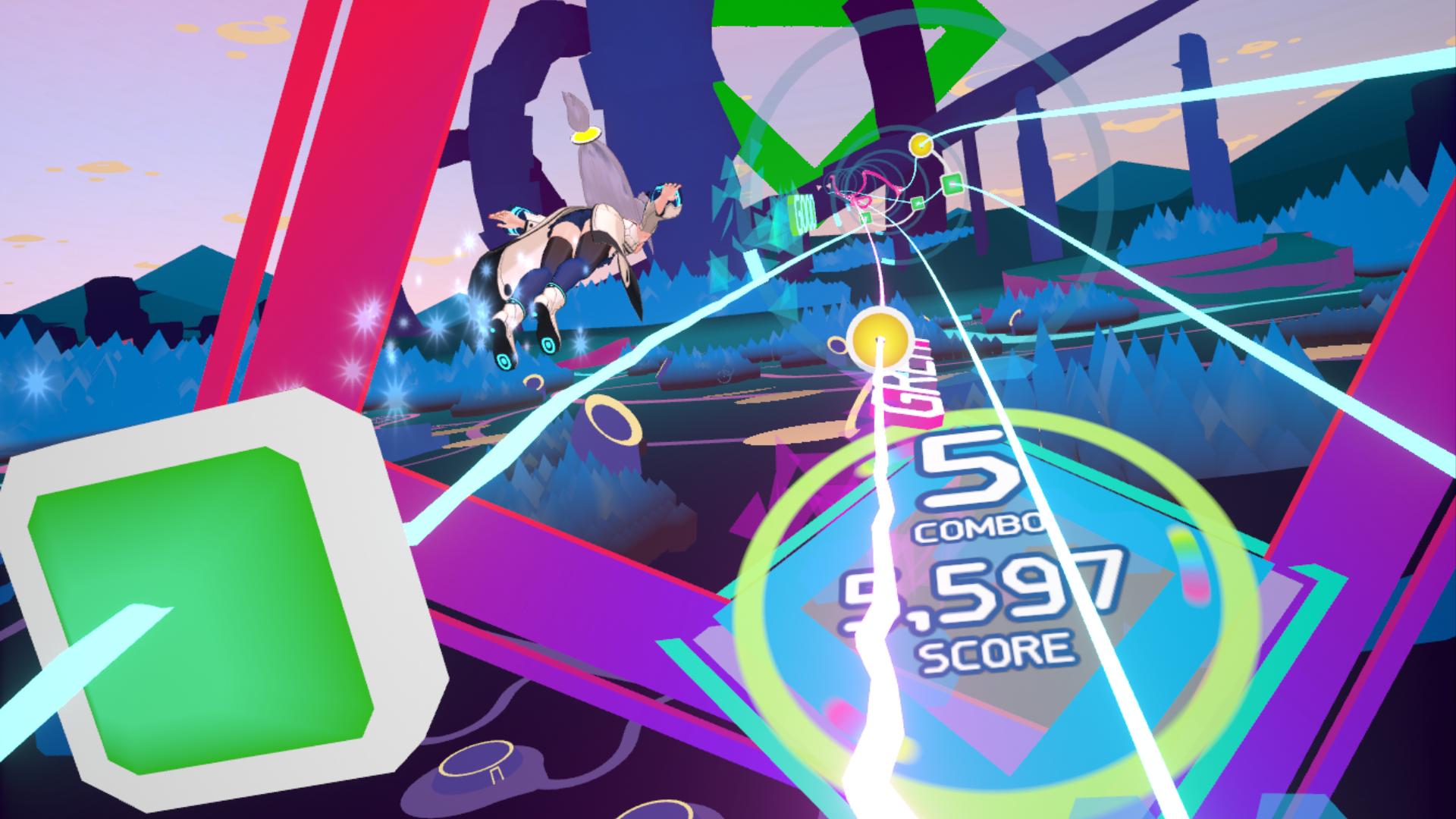 If there’s one problem with the Airtone beta it’s that (a few bugs aside) it’s only a small part of the game.  Airtone is absolutely excellent, making great use of the VR motion controls in a fantastic Japanese music/rhythm game.  I ended up playing all the songs multiple times to do better, chasing after the Perfect rating and the 100,000-point score that comes with it on the levels where it felt like an attainable goal.  The lag-free VR experience means any miss is down to my own personal bad timing, which usually only happens when being overwhelmed by a crowded and unfamiliar note track.  The music is light and fluffy J-pop, the bright, colorful landscapes perfect to fly over while bopping to the soundtrack, and the songs are short enough to enjoy learning without feeling like a marathon.  Airtone is still an indeterminate way off but when it lands later this year will be an absolute treat for anyone with the headset to fly into its vibrant musical world.