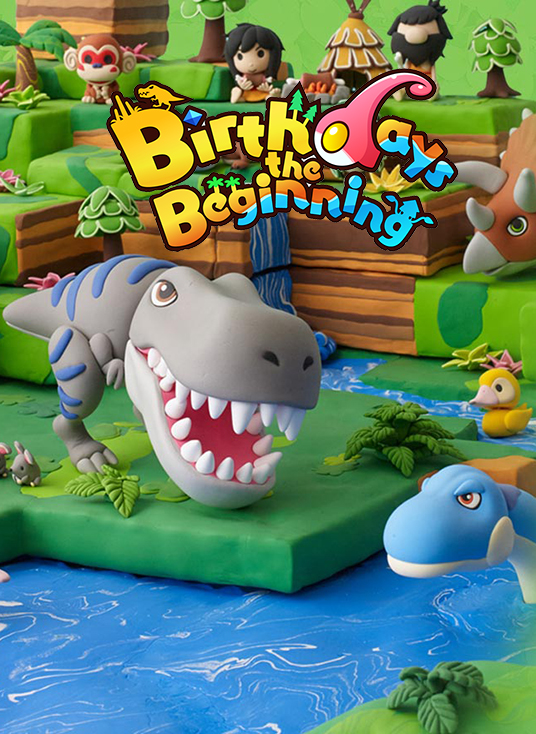 Once life has a foothold somewhere, there’s no turning back.  It’s going to work to fill every environment it can evolve to survive in, changing and mutating over time to maximize both survival and diversity.  That doesn’t mean you can’t help it along the way, though, and in Birthdays: The Beginning you get to control the environment to persuade life to evolve from the smallest bacteria to huge dinosaurs and all the way to mankind.  It may take millions of years to get there but that’s OK, you have literally all the time in the world.

Like so many epic adventures, Birthdays: The Beginning starts with a young child exploring a cave.  Getting trapped in the past at the start of the Earth, the kid finds himself dressed as a Power Rangers-type hero and talking to a chatty diamond who guides him through the basics.  At first it seems that he can go home after a few basic tasks, like terraforming a small section of the planet to create an environment suitable for life, but it soon becomes apparent that if the kid ever hopes to get back to where he started he’s going to have to guide the evolution of life through its entire history in order to create civilization again.  Tossing a ring in a volcano wouldn’t even count as a side-quest by comparison.

Thankfully, life is a self-regulating system.  Give it a place to be and it’s going to do its level best to inhabit it, so the primary task is to terraform the world to encourage new species to emerge.  The systems are simple on the surface but, when you’ve got enough of them interacting, they have complicated results.  At its most basic, Birthdays: The Beginning is a game about raising and lowering land.  Toss up a few mountains and the temperature on the planet’s surface drops, while sinking the land into the sea results in the temperature increasing.  The initial flat plane of the world is one block above sea level, and in the main story mode that first area is small enough so that a few changes have a major effect.  Sink the ocean deep enough to warm up the world and it doesn’t take long to get some very simple life forms.  Too simple, in fact, to do much with, but it’s a start. 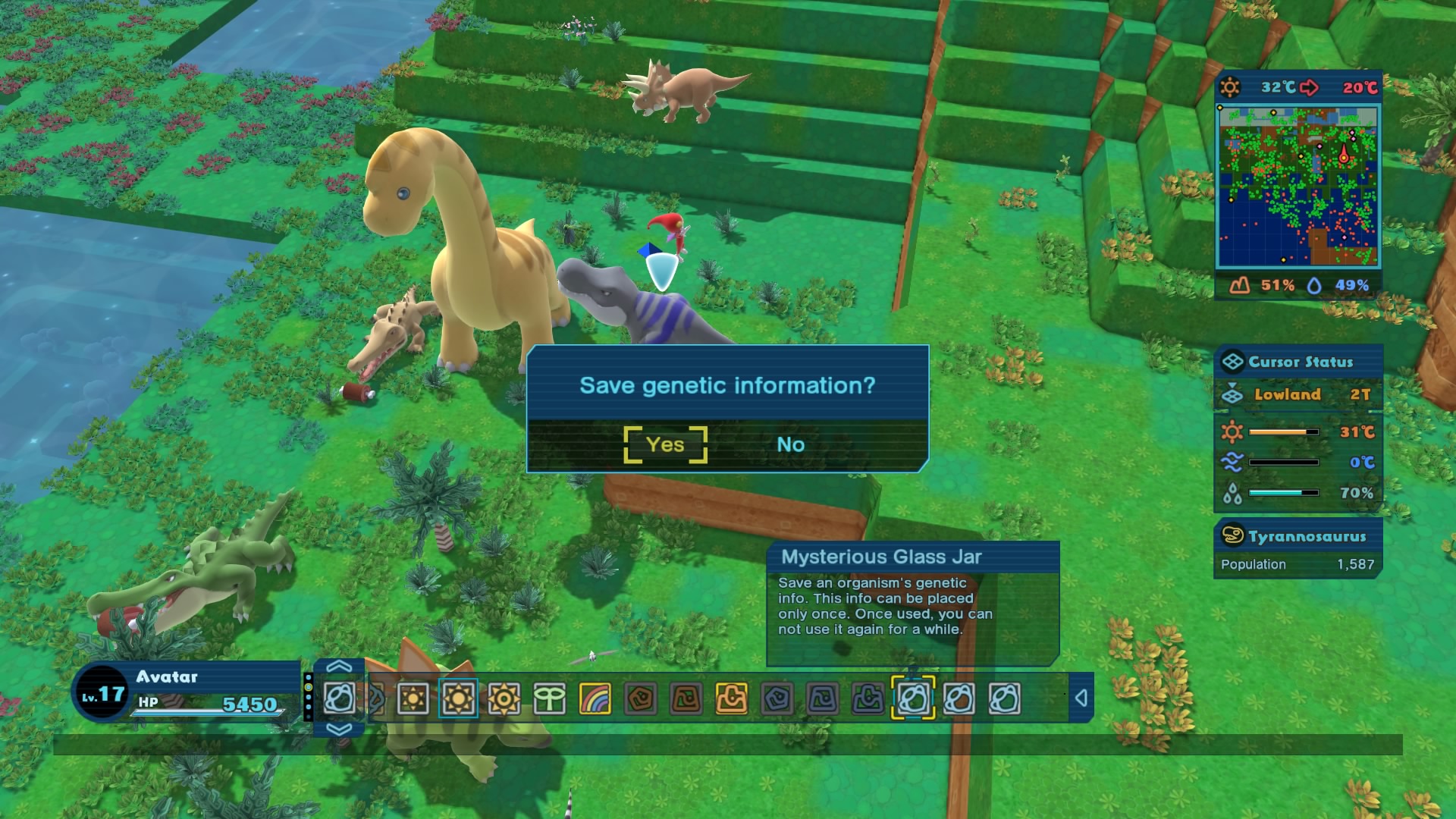 There are two primary modes of play to control the world.  Time stops in the close-up view when you’re flying over the world shaping terrain.  Animals move about and do things, of course, but centuries and even millennia aren’t the kind of time-frames necessary for anything important to happen.  Jumping to Macro mode, where you hover outside of the world as time zips on by, is when you get to see the result of the changes.  The map hovers in the center showing where things are happening, but off to the side is a population counter for each of the species being effected by your landscaping.  Some critters will love the results and have a population explosion while others might go extinct, but evolution keeps marching on.

The main goal of Birthdays is to evolve new life, and while your main actions of raising and lowering land don’t seem like enough to make this happen there are several systems ticking away under the hood to make this happen.  Adding an ocean, for example, can not only raise the temperature but also increase the humidity.  This might encourage a population explosion in a creature that thrives in the new environment, and when their numbers are high enough that can lead to the sudden appearance of a predator.  Once that happens it’s time to exit Macro mode and head back in to catalog the new creature once you find where it’s hiding in the world, because while evolving a more vibrant ecosystem is all well and good, you’ll only level up by recording your creations. 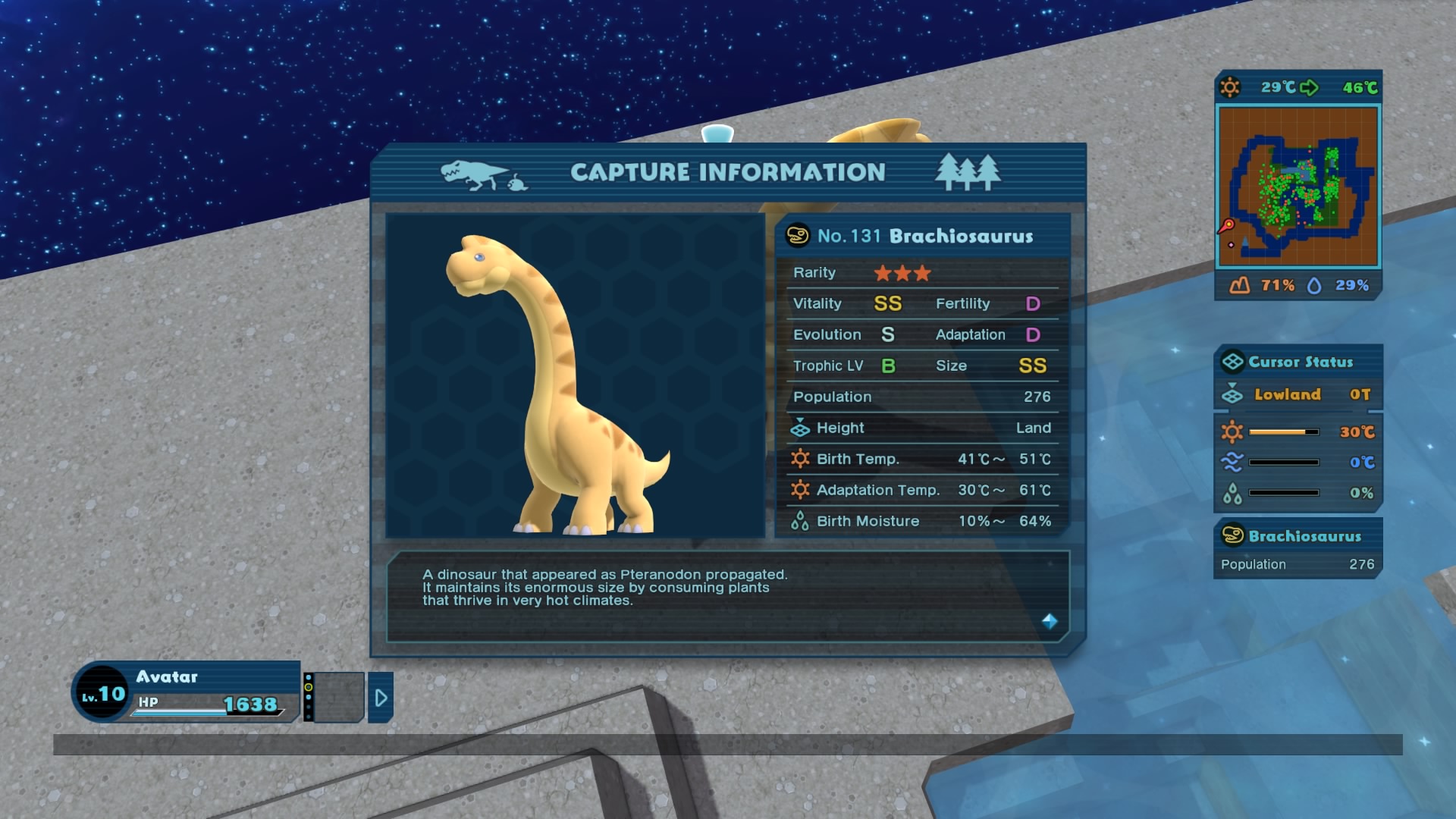 The primary advantage of leveling up is being able to get more work done when you stop time.  Every raise and lower of the terrain takes a bit of health off the meter, and when you’re higher level you can not only affect larger areas of land at once but have far more health to do it with.  When it’s at zero, though, you can either head out to recover as the years zip by or use a healing item to keep working.  Items are earned by meeting certain goals, such as raising or lowering land or evolving new species, and they allow you to further fine-tune your planetary creation.  River Source, for example, lets you put in fresh water rather than work with just ocean, while the Field item lets you flatten out the terrain from the frequently-chaotic results.  You can raise and lower each square individually to carefully craft the world to your liking, but when you just want a quick mountain it’s usually easier to just set the area of effect to max and fly in a circle, letting it grow in a fairly messy fashion.  Some times it’s just easier to edit chaos into shape than get overly precise.

In the early stages of the game there’s a clear-cut goal, with the helper pointing you at the next species to advance and giving specific instructions on how to get there, but once you hit Chapter 3 you’re basically on your own.  Birthdays is a gardening game, more concerned with seeing what you can grow rather than an overarching plot, and the goal is to play and experiment along the way.  You’re not thrown to the wolves, though, because there’s an incredibly useful Library function that gives an outline of what’s necessary for each life form to spring into being and thrive.  It’s only a rough target, though, and details like the name of the species and whether it requires a certain number of another type of creature before it evolves are left for the player to discover.  The creatures for the story goals have precise information provided by the helper, with a specific temperature and any other requirements clearly outlined, but it can be hard to evolve a necessary animal when the game refuses to provide its information. 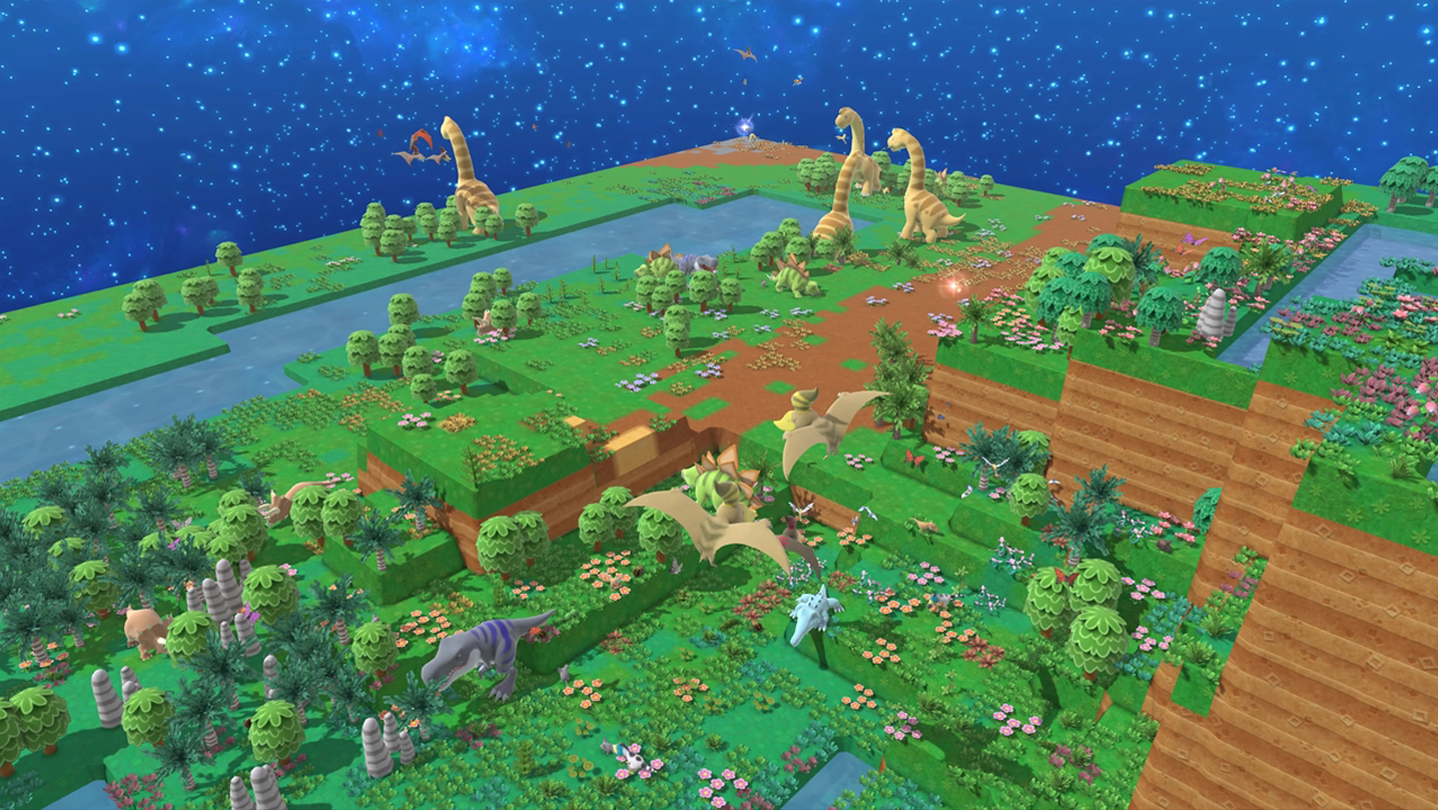 Birthdays: The Beginning is a cute and clever world-builder where simple actions can have deep, complicated results.  While it was never apparent that life evolved by the guiding hand of a super-sentai hero, Birthdays shows how much all of Earth owes to their climate-controlling wisdom.  Flying around the planet raising and lowering the land has far more complex results than would be expected thanks to the interlocking systems, and it’s always a treat to see what new life pops up as the result of the latest round of tweaking.  The main story is plenty big enough but is also joined by a sandbox and goal-based modes, providing plenty of world-building fun.  As cute as it is deep, Birthdays is a purely charming life-sim.