Starting with Dynasty Warriors 3 and oddly missing from Dynasty Warriors 6, it became common practice for an expansion subtitled Xtreme Legends to be released and add some assorted features. This practice really hammers the point home that Koei Tecmo and Omega Force have mastered the art of tweaking the same game over and over again and people will still buy it and play it religiously, myself and at least one other writer for this site are among those who make heavy contributions to the Koei Kids Scholarship Fund.

Dynasty Warriors 8 was released only a few months before Microsoft and Sony unleashed their eighth generation consoles. Before I got around to picking up this title, I gained knowledge that Dynasty Warriors 8 will be ported to the PlayStation 4, with the Xtreme Legends expansion included. This was one of those rare occasions where I was able to not only convince myself that it would be wise to be patient and acquire this game then since I knew I would eventually own a PlayStation 4, but also was able to act on this decision of delayed gratification in that I would end up with the superior version of the game and thus save money by purchasing the complete version instead of the base game and the expansion content. This financial equation completely ignores the fact that in order to save money by buying one game instead of two I need to purchase a new gaming system that costs significantly more than the games. This is probably why I am not a financial adviser. 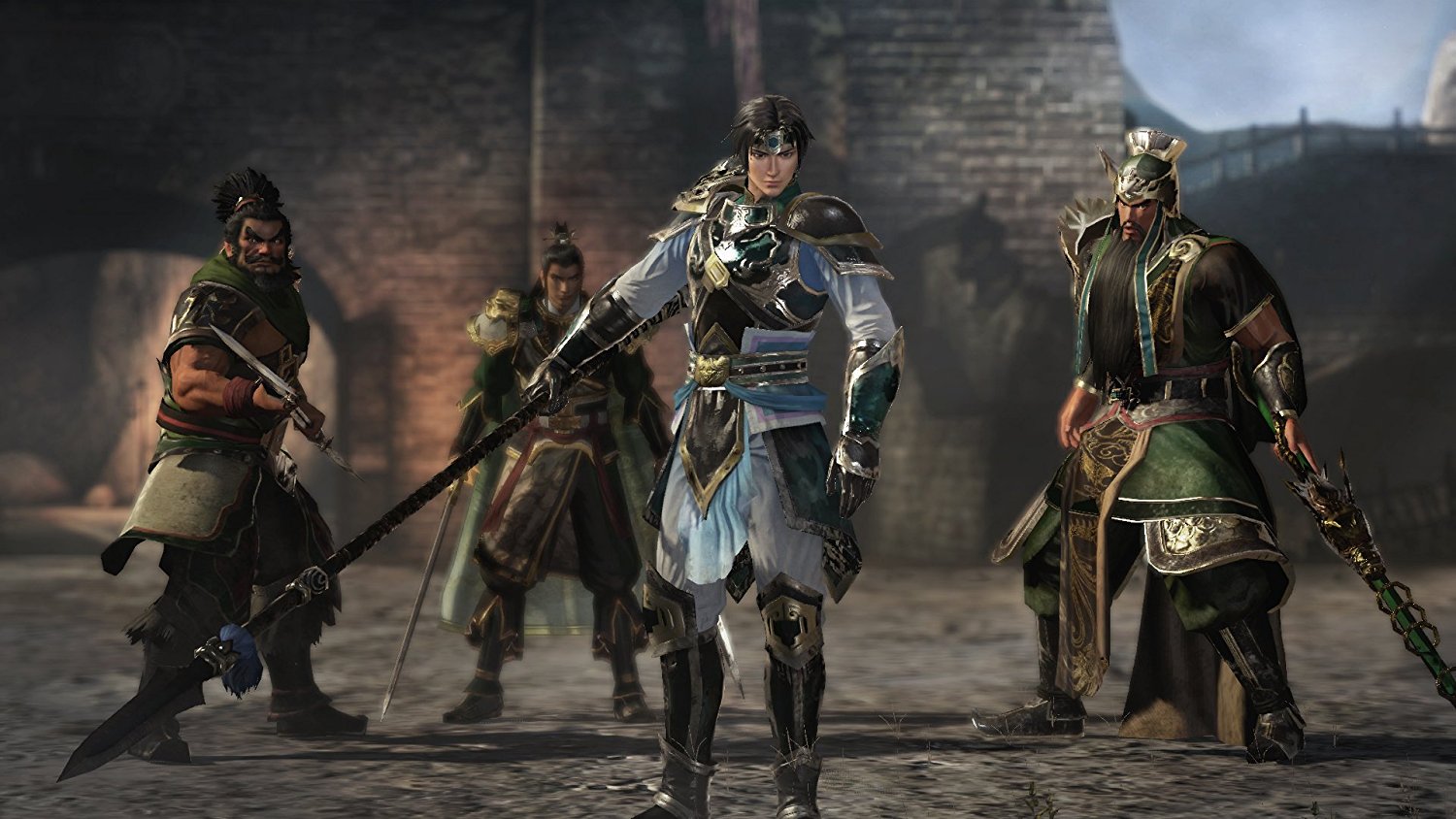 The day finally arrives when I own a PlayStation 4 and start playing Dynasty Warriors 8: Xtreme Legends Complete Edition. With a title with that many words, how could the game not be good? They finally released a single disc version of a base Dynasty Warriors game with the Xtreme Legends content, and were even considerate enough to allow people who played it on their PlayStation 3 to transfer the save data so they didn’t have to start over from scratch. This was indeed a glorious release, a crowning achievement in a series of uncountable games that tell the same story in an endless loop that brings some slight alterations with each retelling.

And then the knife twisted in my back and felt how Dong Zhuo did when he was betrayed by Lu Bu. As I played through the Shu campaign, something seemed amiss. My characters had accomplished some feats that I thought should have unlocked a trophy but there were no trophies. Rage boiled inside as a I screamed “Where my stimis*!!” Doing some trophy research, I came to the realization that the trophies for the Complete Edition are only the trophies for Xtreme Legends, and that the regular Dynasty Warriors 8 trophies did not survive the porting process, despite the fact that the entire game was otherwise present. 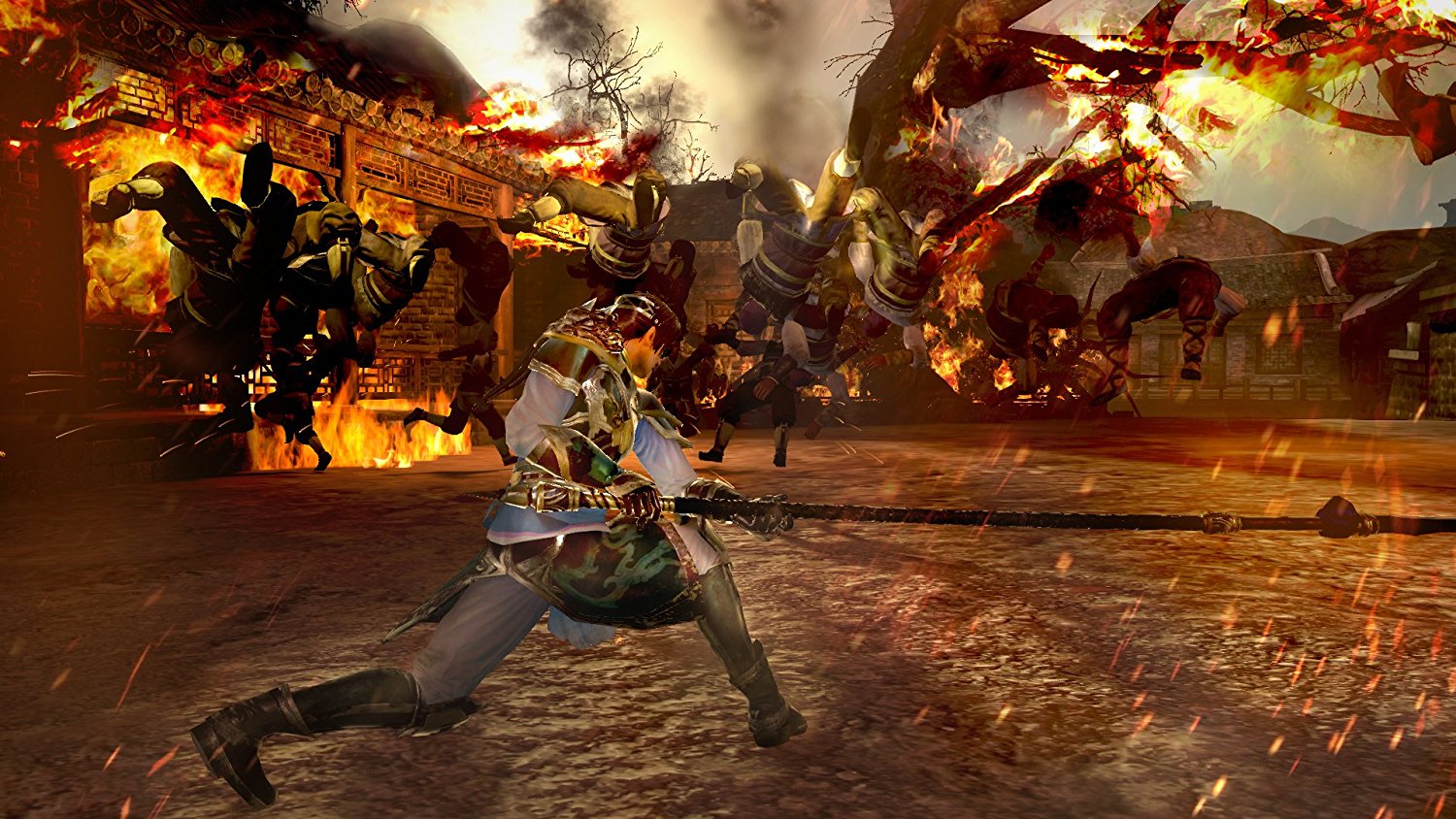 I do not know how large or how minuscule the Venn diagram intersection of hardcore Dynasty Warriors fans and trophy hunters is, but as someone who fits into that elongated oval I believe I speak for all of us when I say this is the greatest outrage to ever occur in the world of gaming. It’s great that I have the 44 Xtreme Legends trophies, but as I play the Shu, Wu, Jin, and Wei stories to completion, I know there are 41 valuable pieces of stimis that I will never grasp and add to my collection that I can proudly display on my PSN profile that is viewed by maybe two people.

In roughly 99 percent of video games, trophies and achievements have no impact whatsoever on the game. They really are nothing more than a virtual Skinner Box where the player is given a token reward that is completely meaningless save for some personal satisfaction for accomplishing some goal or performing a task that also has no direct impact in their actual life. One could argue that these rewards are nothing more than epitaphs for time wasted in front of a monitor, basking in radiation as we willfully inflict carpal tunnel syndrome on ourselves as we detach from reality into some violent escapist fantasy. 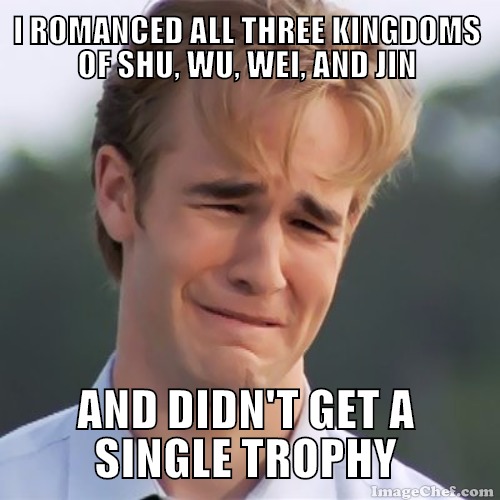 Screw that nihilist nonsense I want my stimis! Stimis über alles! Dynasty Warriors 8: Xtreme Legends Complete Edition is the definitive packaging of Dynasty Warriors 8 and its expanded content, and a model I would like to see with future Dynasty Warriors, but the overall presentation of this achievement in ancient Chinese warfare is flawed by not including all 85 trophies that would be present if one acquired these games as separate entities. I still completed all additional content along with the Shu, Wu, Wei and Jin campaigns, but the completion was not the usual joyous affair where I erupted in jubilation when I heard that ping and the trophy appeared in the corner. Instead it was like an animal, trapped in a Skinner Box that had run out of treats. I completed the task at hand over and over again, with hopes in vain that the reward I sought would appear. It never did, and with each successful accomplishment that went unnoticed I died a little as a piece of my soul was forever stained with sorrow and emptiness.

*Stimis: A term coined by Hardcore Gamer’s Jason Bohn. This is a poorly enunciated attempt at saying stimulus, and it refers to Achievements on Steam and Microsoft consoles and Trophies on Sony consoles. The origin of this word is believed to have been sometime in 2009 in reference to President Obama’s package.