The Teenage Mutant Ninja Turtles have enjoyed popularity over the course of many years and incarnations. As a result they have been the subject of numerous video games of varying quality. One of the earliest games starring the masked purveyors of pizza reduced the colorful crew to a monochromatic menagerie of mutants on the original Nintendo Game Boy. Because of this, players could only differentiate the turtles by their choice of weapon and not by the color of their mask, but chances are if you were playing this game you knew what turtle had what weapon anyway.

Teenage Mutant Ninja Turtles: Fall of the Foot Clan was not only one of the first TMNT games based on the 1987 cartoon but also one of the earlier Game Boy Games. Despite the obvious technological limitations that Game Boy titles had to work with, this was quite an enjoyable title in its time and holds up surprisingly well. The game play is pretty simple, 2D platforming while having to battle the minions of the Foot Clan in order to rescue their news reporter friend April O’Neil who has somehow ended up in the clutches of Shredder and Krang, which is neither the first nor last time she has found herself in such a predicament. The game itself does not take very long to complete, but short and straight forward is kind of what you’d want from a portable title, especially in an age where battery powered save states were fairly uncommon in video games.

The player chooses which of the four turtles they want to play as. They all play pretty much the same so it’s really a matter of personal preference. The standard attacks vary slightly just because of the different weapons, but all turtles will jump kick if they attack in the air and throw shurikens if they attack while crouching. Whenever a turtle is defeated the player has to select another turtle to continue, and when all turtles are defeated it’s game over. In order to prevent this, the turtles can replenish health by eating pizza that is randomly scattered throughout the world like just about every TMNT game. Now, speaking as someone who has actually practiced martial arts, this is something that never made sense to me. I understand that carb bombing one’s diet the night before a sporting event is a good way to have energy when you need it, but if I scarf down a whole pizza in the middle of a battle where I am jumping, kicking, and swinging weapons, I am not going to feel rejuvenated and ready to get back in the fray. I am going to want a nap. Maybe the extreme high level of intensity in battling the Foot Clan combined with being teenagers has blessed the turtles with a hyperactive metabolism and they can instantly convert a 6000 calorie pizza into energy without feeling bloated and sluggish. 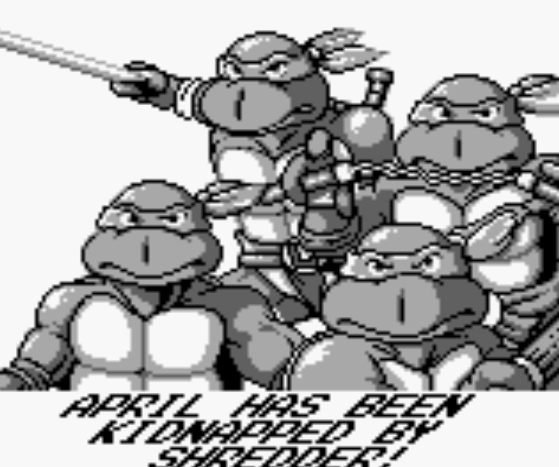 As mentioned earlier this is a rather short game with only five levels to complete, which included going into the sewers, battling atop moving vehicles, and of course entering into the Technodrome. The player can pick what ever level they wish to play, though in order to get the real ending they have to start at level one, though all five levels can be completed in a half hour, give or take. The graphics were actually quite impressive for a 1990 Game Boy game, I would even say they are better than the 1989 NES TMNT game provided you don’t hold the color palette against it. Given the platform, the graphics do a fantastic job of faithfully recreating the characters from the cartoon, which to me is important if a game is going to be based off something like a TV show or comic book.

Even though Fall of the Foot Clan came out after the NES and arcade TMNT games, both released in 1989, it felt like a bridge between the two games. It maintained the 2D platforming aspect of the NES game and included its use of shurikens but converted to more straight forward, linear progression found in the arcade, plus added the arcade game’s jump kick ability. The graphics have more in common with the arcade version, even including some of the same cut scenes such as the turtles jumping into the Technodrome and untying April O’Neil. Even the epilogue text that is displayed after vanquishing Krang and Shredder is lifted from the arcade version. 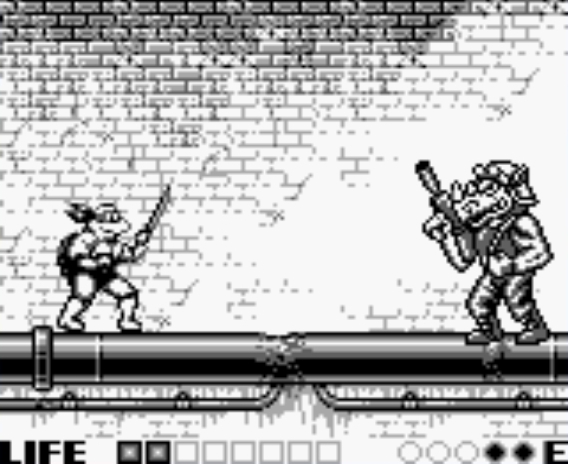 Teenage Mutant Ninja Turtles: Fall of the Foot Clan was a great title for the Game Boy not because it did anything innovative but because it excelled at what it did. The game was just challenging enough to prevent it from being boring, but it didn’t come anywhere near the level of frustration that its NES predecessor was able to provide. It was a simple, no frills action platformer that was an enjoyable way to kill a half hour. And unlike the NES TMNT, which in spite of some issues is also a good game, Fall of the Foot Clan did a good job of actually staying true to the source material, making it not just a fun game but something that could be appreciated by Teenage Mutant Ninja Turtles fans.