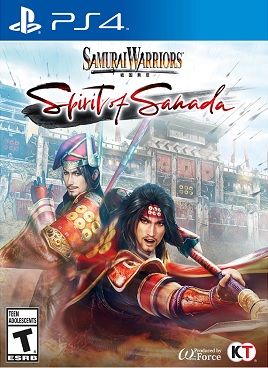 At the beginning of the year, we put up a post with a short collection of listicles that we expected to appear throughout the year. One in particular stood out, The Top Ten Dynasty Warriors Games Released This Year (So Far). At the time, the joke was based on a few upcoming titles that came to mind off the top of the head and the topic of this review wasn’t even mentioned. As the year moves on, though, it seems like this very list could be created. This brings us to Omega Force’s latest entry in the Musou series, Samurai Warriors: Spirit of Sanada. As always, it would be objectively understandable to dismiss this as “just another one.” To someone who isn’t a fan, these games are very similar. The thing is, Sanada does do some new things with the formula. Nothing particularly risky on the part of Omega Force or publisher Koei Tecmo, but there are enough differences to give fans a reason to return to the Sengoku era once more.

As the title implies, this iteration focuses on the Sanada Clan, an organization that values valor and honor, as they strive to protect their families and loved ones, as well as those with whom they are allied, in a period rife with war, betrayal, and personal drama. The Samurai Warriors series has certainly covered their exploits before, true, but never in as much depth. Because of a more stringent focus, players are able to get more of a grasp on the romanticized personalities of the heroes in question in a way that has never been done before. Yes, these are returning characters, but even something as simple as taking a moment to show the first protagonist, Masayuki Sanada, bond with his infant sons lends a bit more weight to the proceedings. Before, I had a clinical understanding of the events being depicted, along with some quirky moments played for laughs (“Who built a castle in just one day? It’s Hideyoshi! Hideyoshi, we praise!“), but there was never more of a connection to the characters in these games beyond liking a character’s weapons and moves set. Omega Force has used this format to change that.

Spirit of Sanada also uses this format to allow the story to breathe a bit more. Yes, there is plenty of action. That is what this game is really about, after all. However, between the big battles, players can work on building friendships with other people in town by bribing them, go fishing, farm the land, scour the countryside for materials to use for weapons upgrades, and more. By showing what the heroes are hoping to protect, the battles themselves feel somehow grander and more important. It also adds some extra weight to the cutscenes, such as one sequence they debate conquering an area. It is an expenditure of resources and time away from family to attack a region that isn’t doing them any harm, but would be conquered by the encroaching Oda force, leaving the Sanada clan vulnerable if nothing is done. 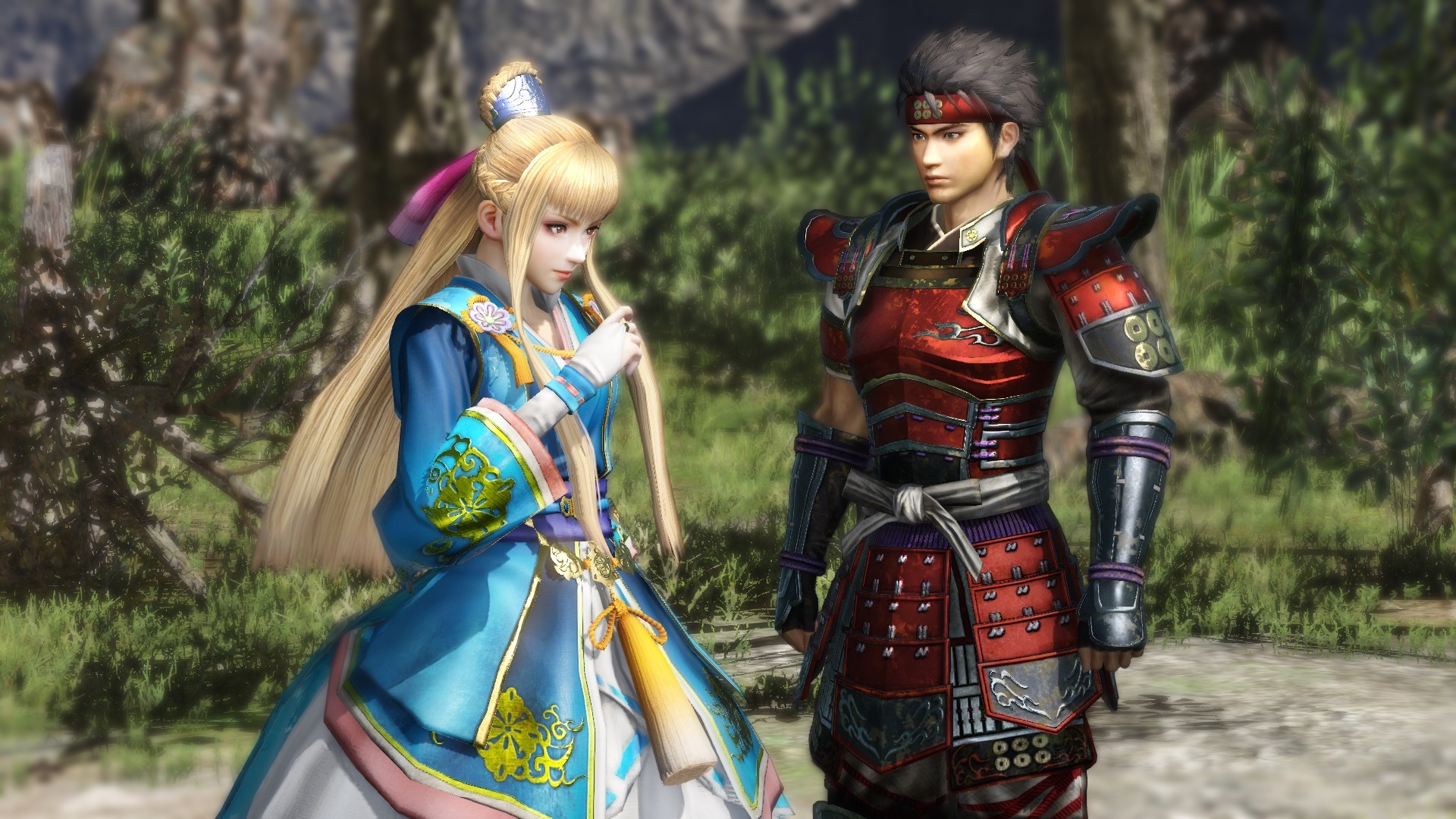 Still, while the story is vastly improved due to being more focused, the game still suffers from the slightly stilted translation that has plagued the Dynasty and Samurai Warriors games from the beginning. There is always something a tad off, just ever so slightly unnatural. Nothing is a game breaker, but it is noticeable at times. Also, some lesser known characters that play pivotal roles in the story might not be explained as thoroughly as they could be, forcing the player to go through the in game glossary to catch up.

As stated, the battles take precedence over everything else over all of the other side activities. Anyone who has played Samurai Warriors 4, 4-II or Samurai Warriors 4: Empires will have a good idea about how this one plays. There are regular attacks that can be chained with strong attacks for combos, the hyper attacks that cause the player to zip around, mowing down minor enemies quickly, and the “rock falls, everyone dies” powerful Musou attacks, that can clear dozens of enemy soldiers with just one use. Also included is the rage meter from Berserk and the Band of the Hawk. A bar below the health and Musou bars fills up. Triggering it with a press of the right stick causes the hero to enter Rage mode. While in this mode, the player is stronger and able to dispense more fluid attack strings. Defeat enough enemies, and the player can enter into new, higher states of rage, gaining even further strength. New and more devastating Musou attacks can also be used when rage is engaged, adding a bit more variety in the fighting. 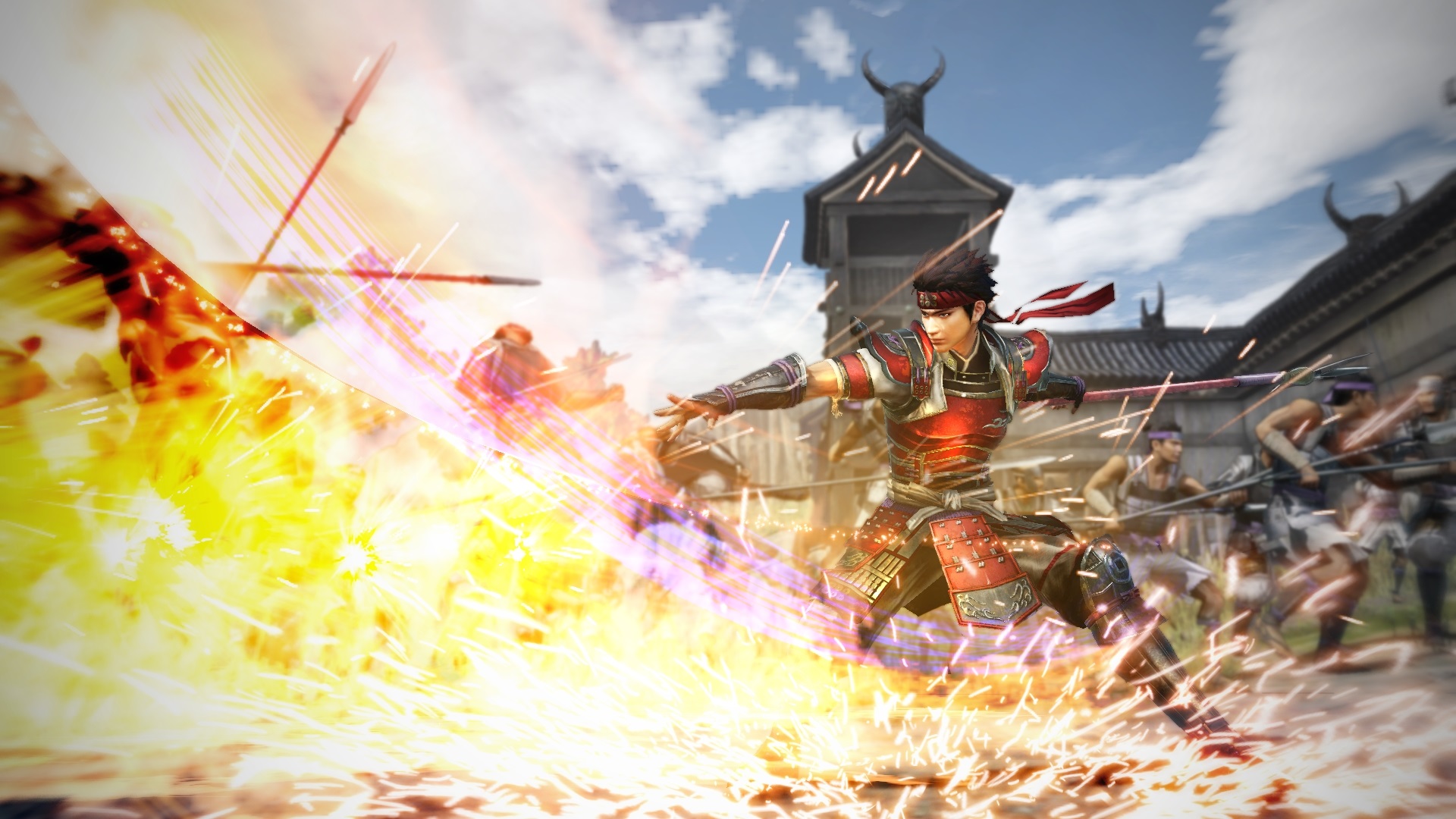 One of the cooler additions comes in the form of Multi Stage Battles. As the name implies, these fights are spread across different maps that all lead into one campaign. For example, the first part might be using reduced forces to drive a group of enemies into a the welcoming arms of the main force, forcing them into a disadvantage.

These are admittedly scripted, with the stages either ending in success or failure. What makes this it a fun addition comes in the form of how missions and stratagems interlink between the different stages. Completing an optional mission in one part allows the option to engage a stratagem in the next. To give an example, one officer might be under siege. A mission, called a Feat, might be available to finish the stage before that officer’s health drops below fifty percent. Success here would mean that this officer could assist in hindering the forces at an opportune moment during the next battle. Stratagems themselves cost a “Sanada Coin” to enact, but these are generated at a liberal enough pace that the need to conserve is rare. As these stratagems are completely optional, holding back won’t render a battle unwinnable, just somewhat more difficult. 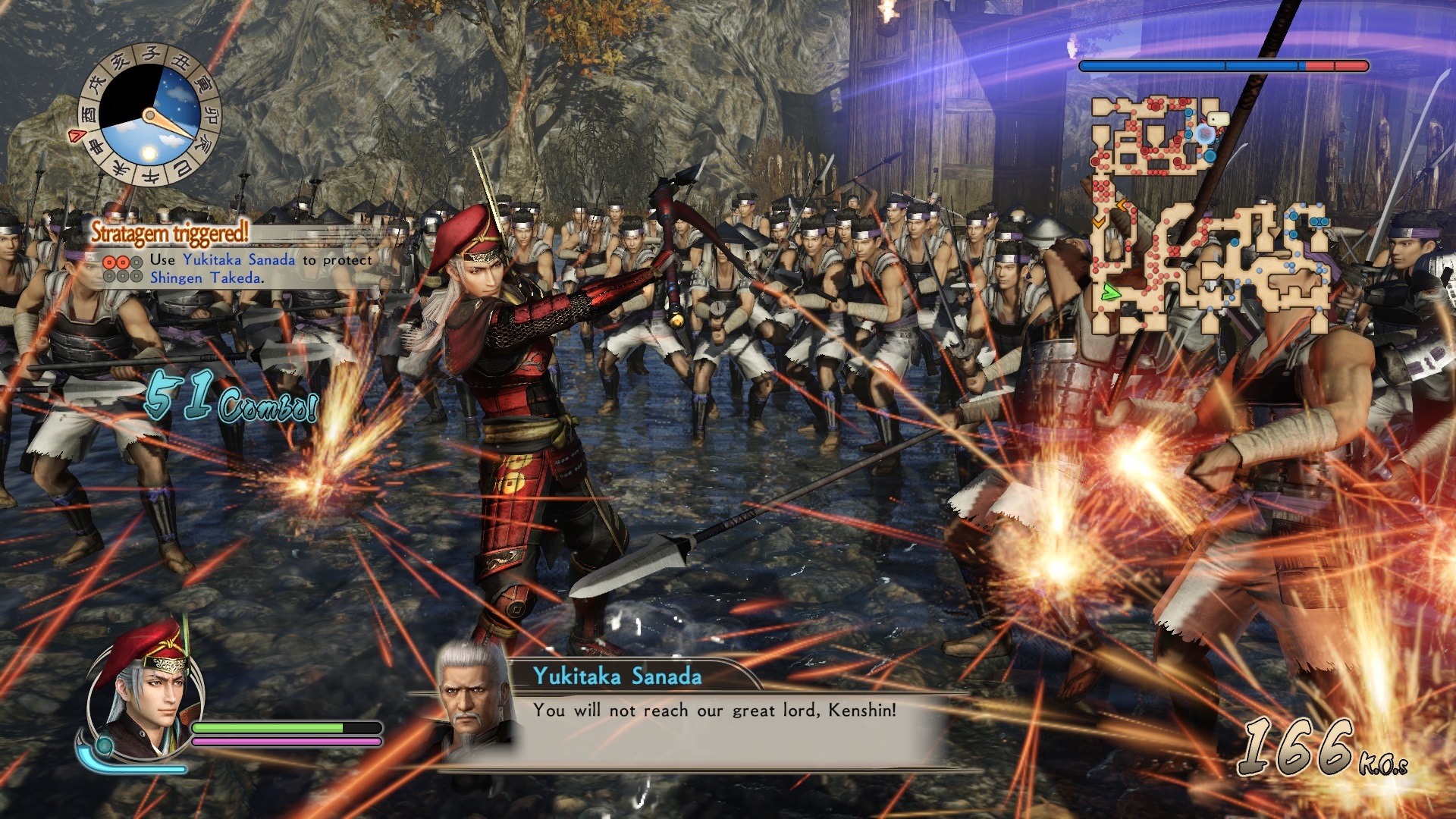 Between battles, the player can also engage in exploration to earn supplies and rack up experience for the current hero. The supplies themselves have various uses, such as crafting weapon improvements, potions for use in battle, and gifts for other officers. During these sections, there will still be random robbers and various jerkbags that try to accost the player, so these portions aren’t bereft of the hacky-slashy. If these sections serve as a rough draft of what to expect in the open world concept being promised for Dynasty Warriors 9, I would say it’s a good start, but the hope is that Omega Force will take it further.

There is one major complaint, though: like Berserk and the Band of the Hawk and Dragon Quest Heroes, there’s no local co-op. These games are perfectly entertaining to play in solo, and the lack of an extra player taking up processing power bumps up the resolution and frame rate, and minimizes the pop in. That is a sacrifice we’re willing to make for some couch co-op. Part of the reason I am so fond of the series is all the memories of the countless hours spent with my best friend playing these games together instead of, you know, talking and having meaningful conversations. Life’s too short for that. 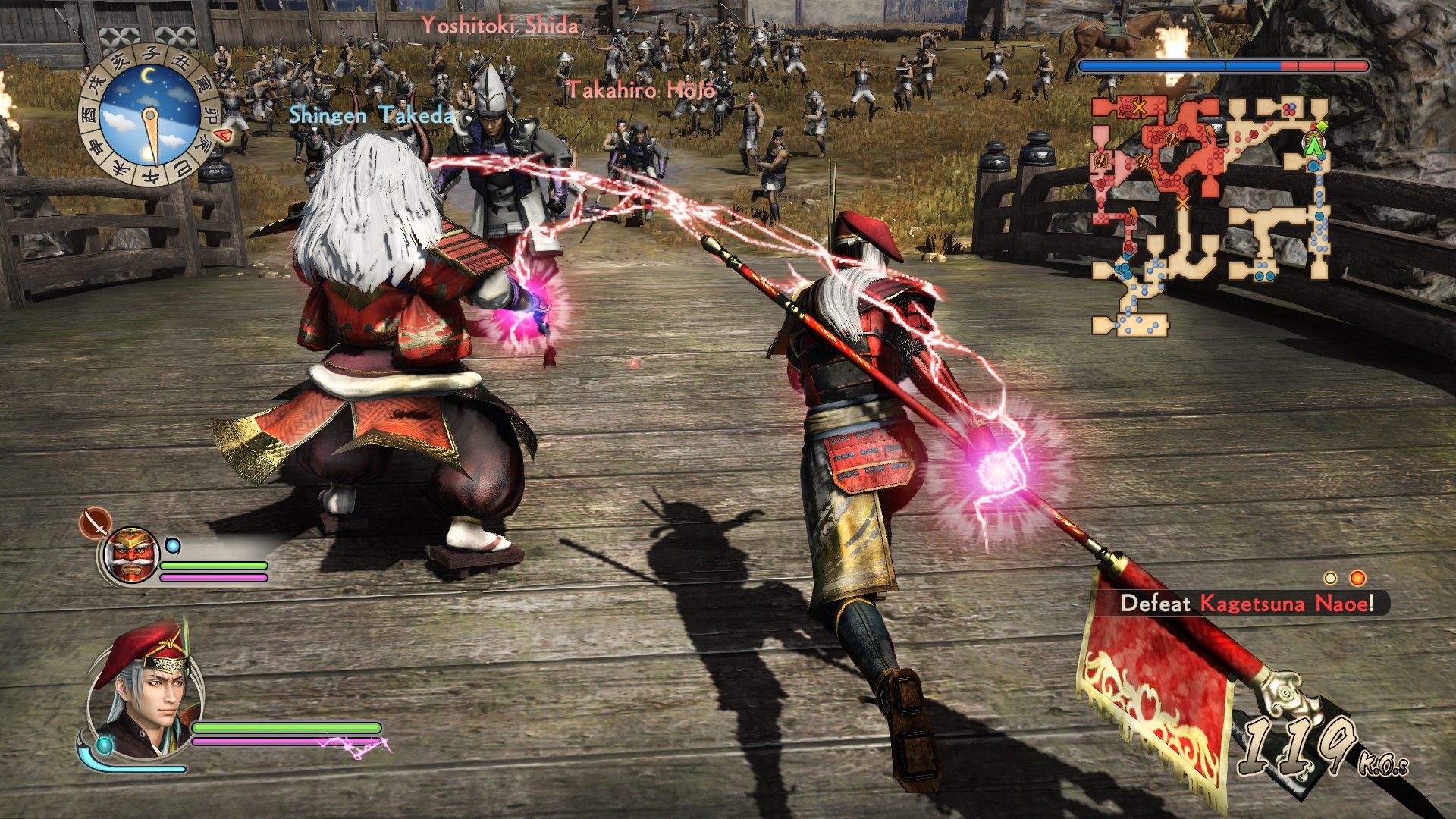 After more than a decade and a half of these things, it would be understandable to grow sick of the formula over the countless iterations. Heck, one wonders what the rate of burn out is like for the creative minds at Omega Force. Yet, they always manage to tweak the formula, adding and subtracting elements each time, leading to interesting results. This philosophy can be seen in Samurai Warriors: Spirit of Sanada. It is obvious that the same engine from the last Samurai Warriors game is being used, but it really does feel like a fresh, focused take on the Musou series.