A decapitated corpse can be a handy thing.  The former owner has no more use for it so, for a squishy mass of undefined goo, it makes a perfect vehicle to go exploring the depths of the dungeon it’s trapped in.  Slide right into the neck hole, animate the corpse and all of a sudden the slime-blob has changed from a defenseless ambulatory sludge into a powerful dungeon-crawling beast of a fighter.  The starting gear might not be all that tough, but the roguelike catacombs have all sorts of strange and useful goodies kicking around in odd corners, and after a few temporary setbacks the potential arsenal is far more robust than a rusty sword and the choice of a wood plank for a shield or a bow that’s seen better days.  A little powering up and a lot of dodge-rolling and you’ll be tearing through the dungeon’s minions in style.

Dead Cells is a roguelike combat side-scroller with just a touch of Metroidvania coursing through its design.  Every run starts you in the deepest dungeon fighting at top speed to escape, dodging and combo-ing as far as possible.  While there’s a little platforming along the way the main focus is combat, and the headless hero has a small but well-designed set of moves to work with.  He comes standard with a double-jump, can do an in-air slam to either stun or crush enemies depending on how high it started, has an incredibly useful dodge roll, and the various weapons come with a few simple button-mashing combos.  Combine this with either shield or bow and whatever secondary skills you can pick up along the way and combat becomes just flexible enough to give plenty of options without being overly complicated. 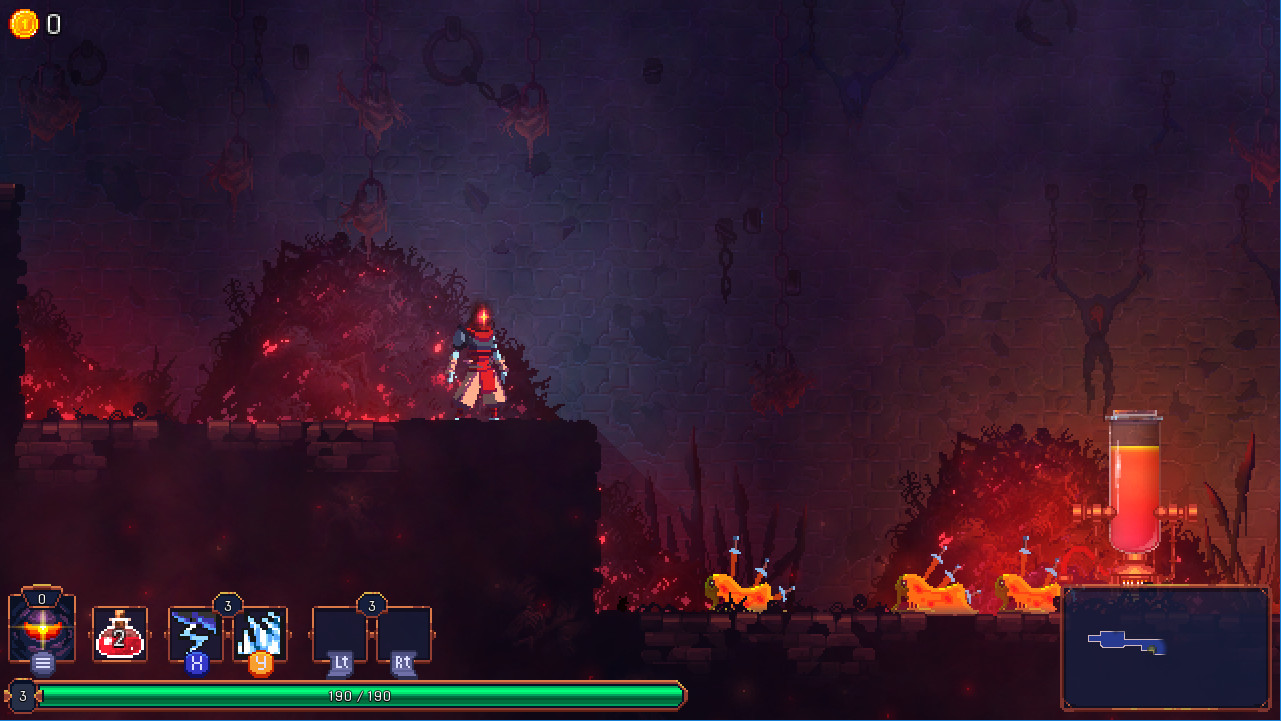 Speed is the your best friend in Dead Cells.  When you’ve got a couple of flying insects, a couple of red skeletons tossing exploding red magic spheres, and another that does fast swiping attacks, and all are under the protection of a wooden idol that needs to be removed first before the actual threats can be dealt with, it helps to know exactly what you can do and pull it off without a thought.  Double-jump to a higher platform, roll past the fast skeleton, ignore the red spheres exploding where you used to be, drop down to the idol and eliminate it with a few sword swipes.  Toss out a freeze bomb to hold the fast skeleton, use the electric homing whip you found a few rooms back to auto-target the bugs, a few sword swipes for the now-frozen skeleton, and finally take out the bomb throwers.  If this had been a plan it would have been a good one, but instead it’s a series of actions you learn as you play the game that flow quickly and  with almost no effort once you have them down.  It’s easy to screw up the timing and take a hit, of course, but it doesn’t take a lot of practice before scenarios like this become a fast-action playground to put your weapons and skills to the test.

The starting arsenal is fairly small, consisting of little more than a rusty sword, basic bow, and a plank of wood for a shield.  You can even make some good distance with them, with practice and the right power-ups.  The first run is going to earn a few new weapons and items, though, and it doesn’t take long for the arsenal to grow to a decent size.  Weapons and other tools are found in blueprint form, and the only way to keep one is to make it to the end of an area.  Between each level is a special shopkeeper who uses the cells enemies frequently drop as currency, using them to make the items found in your blueprint collection become available in the dungeon.  It’s all very nice to find a rapier blueprint, but you’ll need to survive to area’s end and then pay for it in order to get the new toy.  Cells can also be used to carry over more gold between runs, upgrade the power of the weapons, and pay for a bigger healing flask.  The shopkeeper won’t let you move on until you’ve spent every cell, but it’s not like there’s any other use for them. 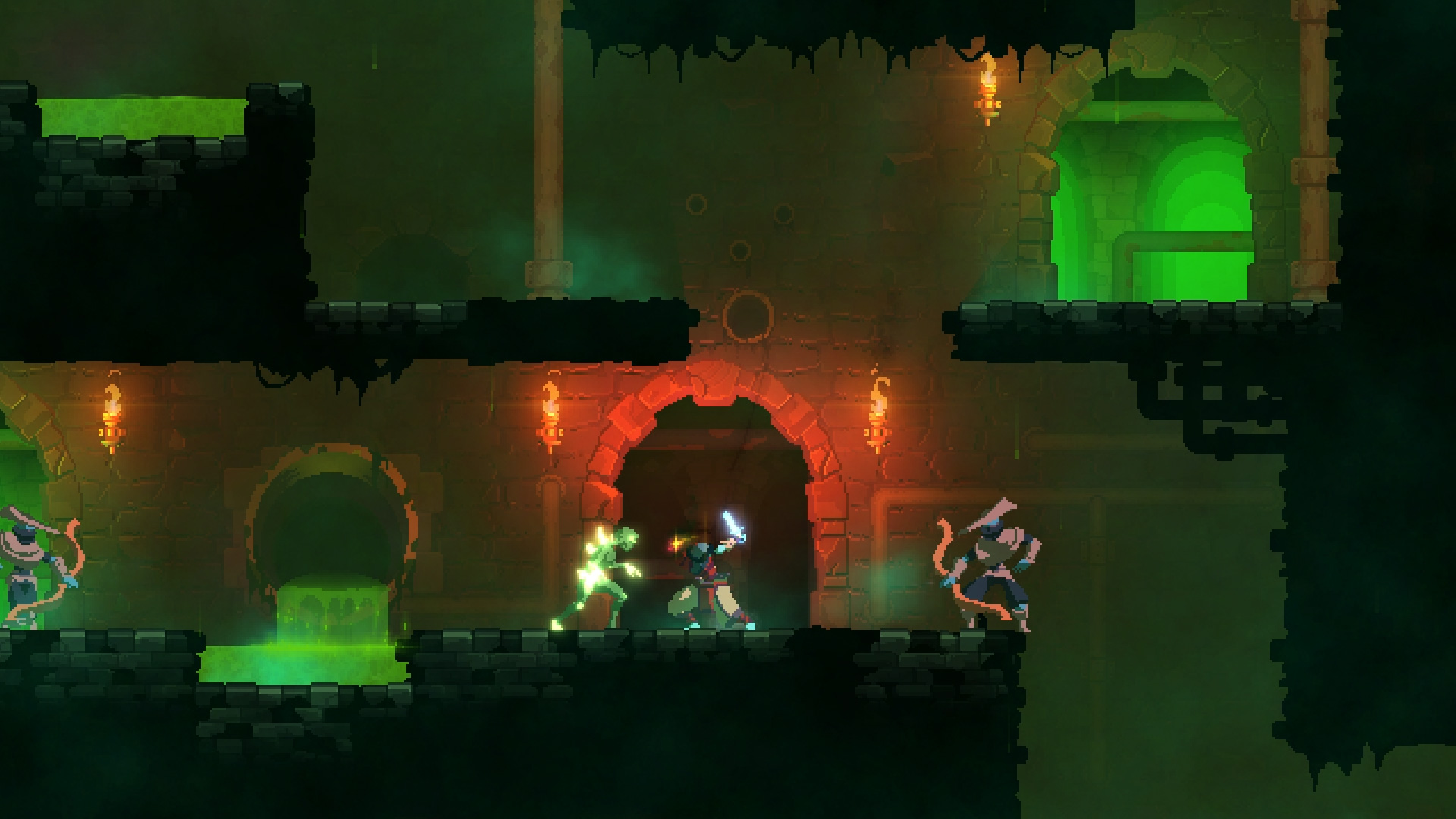 While more powerful weapons are nice, you can still make good distance with the power-ups found scattered throughout each area.  They come in four versions- health, attack power, special usage enhancement, and player’s choice.  Even the weakest sword packs a nice punch once you’ve upped your basic attack, and while all stats reset between runs they tend to power up at a decent pace if you explore thoroughly.  An unlucky or careless run, however, can see enemies in later areas need six or more hits apiece.  That’s not a good plan for survival.

Like any good roguelike, though, death is frequent and expected.  It’s nice to breeze through a crowded encounter without taking a hit, coming up with something that’s half plan, half reaction, but eventually the enemies will clobber your poor, borrowed body back into its former “exceptionally dead” state.  At which point it’s back to the starting room to try again, hopefully with progress made towards the next permanent upgrade.  Carrying over more gold lets you access better items earlier, more health gives you an edge to get farther, the possibility of new weapons gives better odds of starting off with a favorite, and if none of that works out then fast, nimble combat should get you by.  Dead Cells is going to be in Early Access for a good long while before it’s done, with the plan being to double the content including more levels, enemies, weapons, etc.  Even in its current state, however, the game is a simply fantastic side-scrolling dungeon crawl just waiting to kick your head in so you can try again, as many times as it takes to see the end and a few more after that simply for the fun of it.