Extinction is a fast paced action title, where players are the last of an ancient order called the Sentinels – tasked with stopping massive ogres and their minions by defending cities and rescuing villagers. Rather than focused on just slaughtering enemies, the game has a story centered on the threat to humanity, with both a main quest and side missions in an interactive environment. Combat is skill-based, where players can look forward to disarming foes, or just flat out dismembering them limb by limb. The parkour style of combat will fit well with the Extinction Mode, which is unrelated to the story and will focus solely on fighting hordes of enemies. 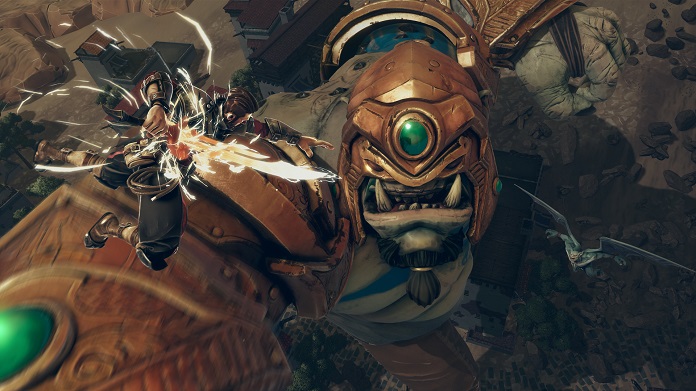 There’s a hint of Attack on Titan sprinkled in, seeing these towering beasts plow through the walls of fortresses, where the hero can vault in the air and take them down.

If you’ve played Tron: Evolution, Bioshock 2: Minerva’s Den, Destiny, you’ve had your hands on a title that Iron Galaxy has worked on. The Chicago and Florida based developer formed back in 2008 mainly to assist other studios – the experienced team is more than prepared to make a large scale title like Extinction. Iron Galaxy’s Director, Kraig Kujawa expressed the team’s progress:

“We’re really happy with the fast, fluid feel of the game and we’re looking forward to showing it behind closed doors at E3.”

Expect Extinction to release in early 2018 for the PlayStation 4, Xbox One and PC.