The job of a theme is to turn a good pinball into a great one.  It’s nice to play a table with good shot layouts, clever gimmicks and nice table toys, but if it’s about a license you just don’t care about it won’t have half the appeal of a similar-quality machine based on something you enjoy.  Batman ’66 has just about as perfect a theme as it’s possible to get, fully licensed from the old and wonderfully terrible TV show, elevating the clean, open table layout from merely fun to being a blast to play.

The basic idea is that you’re Batman cleaning up Gotham City from the parade of campy freaks and weirdos that so harmlessly threatened it on the old tv show.  The four main baddies are Catwoman, Joker, Penguin, and Riddler, but plenty of other less memorable villains (King Tut, Egghead, and a huge number more) show up in cameos.  The eye-burstingly colorful character art on the playfield is enhanced by the backglass display having the scoring readout replaced with a flatscreen monitor running clips from the old tv show.  These are usually unobtrusive, providing tone more than distraction, but there are plenty of fun clips when the ball is at a brief rest in a kickout hole.  The smaller tv screen on the table toy in the upper-left of the playfield also works, but just shows a Batman logo with occasional changes of background color.  While not quite so exciting, it’s better to have as few distractions as possible from tracking the ball.

As for the table itself, it’s basically Batman: The Dark Knight reskinned.  I’m going to have to admit to never having played Dark Knight because I didn’t much care for either the movie or the bland, near-joyless art package covering up what turns out to be a pretty great layout.  Batman 66 has the same crane with the same shots to hit from the ball dangling from its hook, same side-targets except now their G-A-D-G-E-T instead of B-A-T-M-A-N, and the rotating device in the uppper left now reveals different targets on it like a beeping phone you need to hit to answer calls from Commissioner Gordon and start the next play mode. 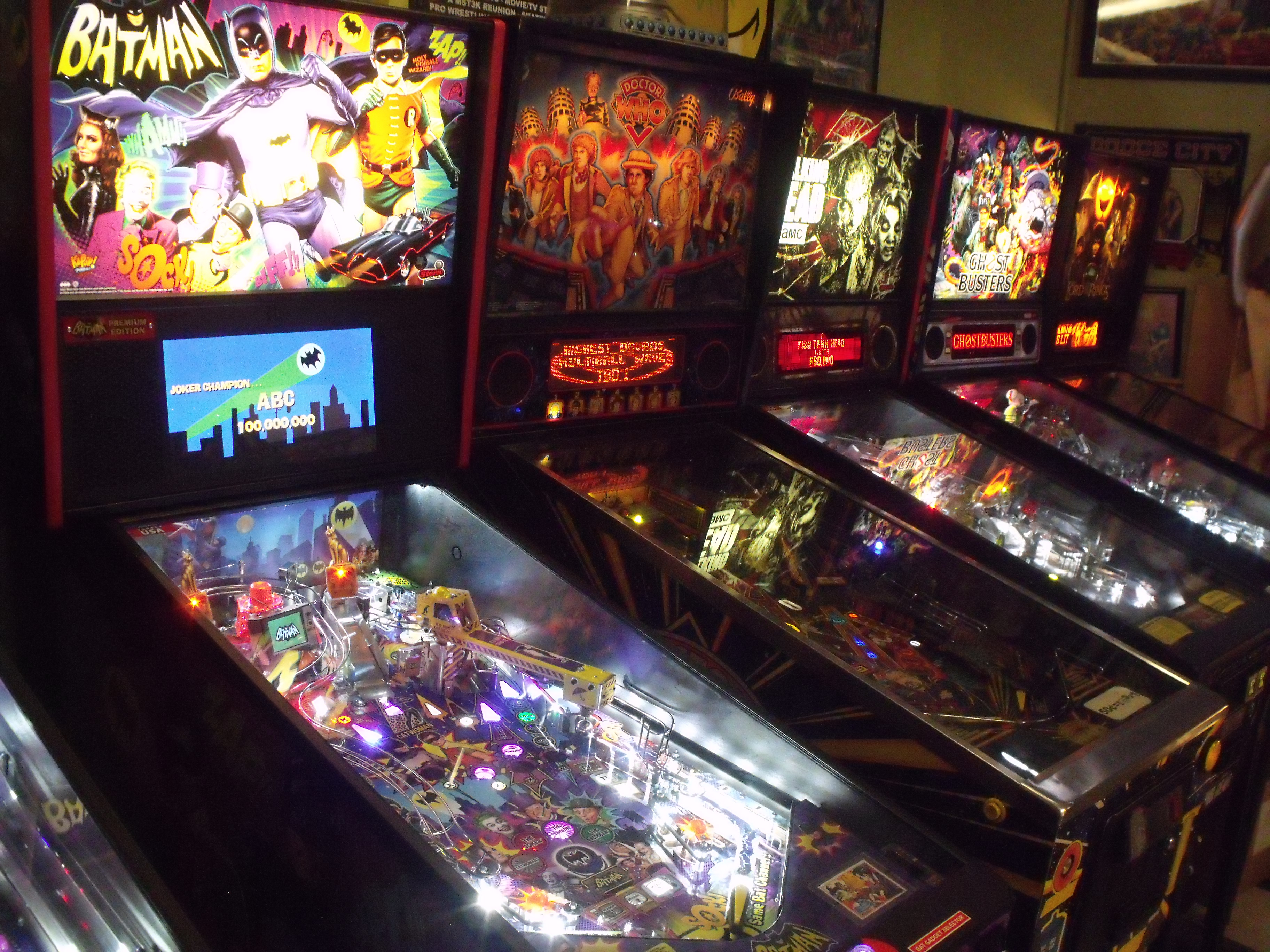 If you haven’t gotten a crack at either the original Dark Knight version of the table or the new Batman 66 update, it’s got a fairly straightforward layout consisting mostly of ramps and lanes but with a few targets to chase after as well.  Hit the right ramps or targets to activate the phone, hit the phone to start the play mode, and then complete a series of shots to put the villain behind bars.  The flashiest gimmick is easily The Penguin, who pilots a crane that moves a ball across the playfield, stopping for a short period at set targets before moving on.  The targets are actually placed right in the way of other ramps you’d be aiming for when the crane isn’t active, so once you’ve got those dialed in then The Penguin doesn’t require learning anything new.  None of the lanes are incredibly hard to hit, thanks to the open layout of the board, but I personally found it’s going to take practice to get a reliable shot to the rightmost lane shot to start multiball.  The skill shot, on the other hand, is one of the easiest I’ve seen.  Shoot the ball when all three of the arrows in the lane are lit and you can’t actually miss it because all three lanes of the starting area award the prize.

While Batman 66 isn’t the most ornate table Stern has designed, it’s still one of the better combinations of layout and theme.  I never put a single quarter into The Dark Knight just because it didn’t look like any fun at all, little more than a movie title slapped on a generic layout plastered with unattractive art, but that was clearly a mistake.  Batman 66 revamps and updates the layout into something more attractive that’s also a total blast to play, packed with a campy personality to infuse every inch of the table with life.  Batman 66 combines a fantastic theme with a strong board layout, making for a pinball that can far too easily suck down the quarters as you jail a few bat-villains and maybe even earn that elusive multiball. 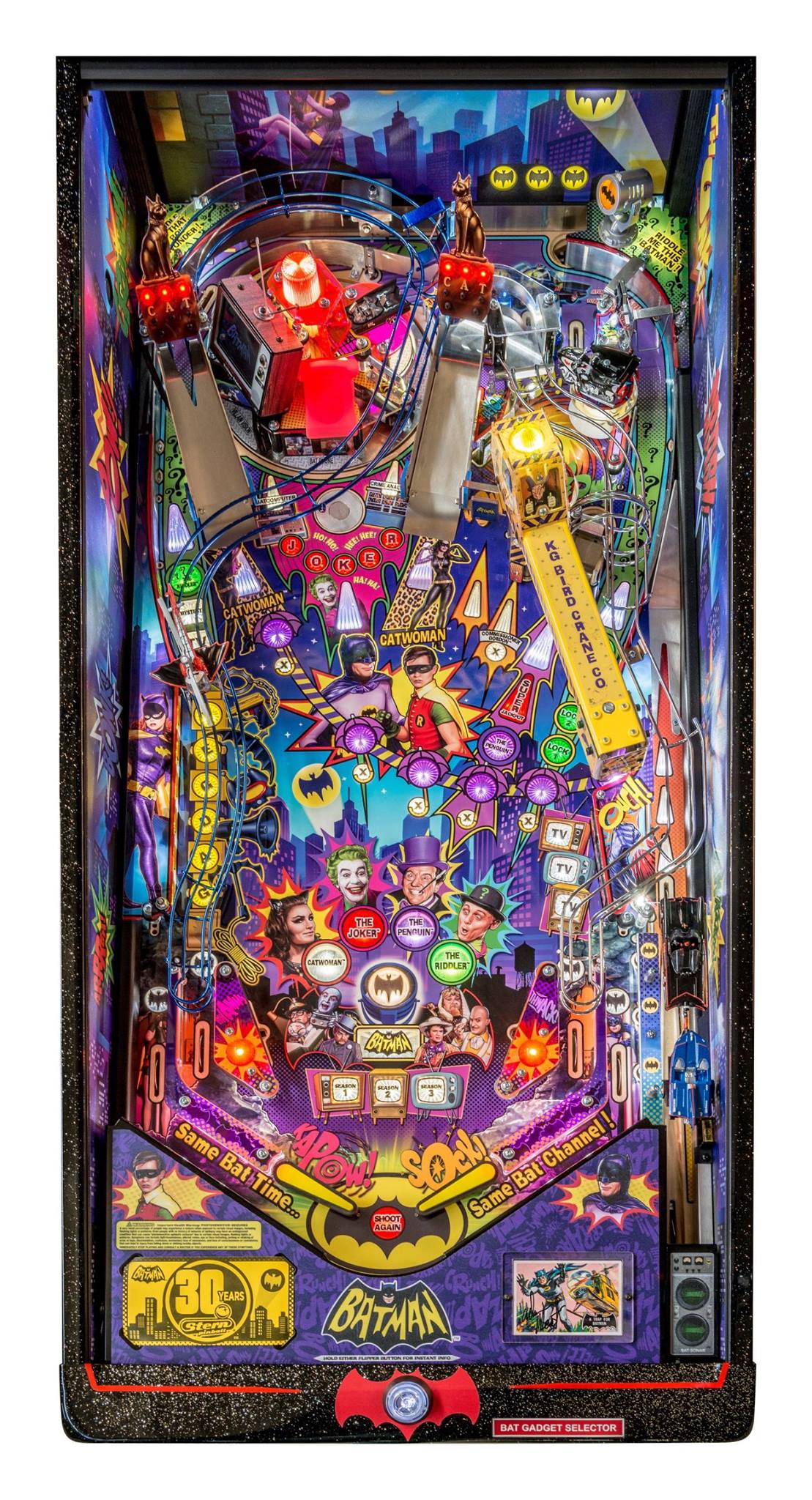