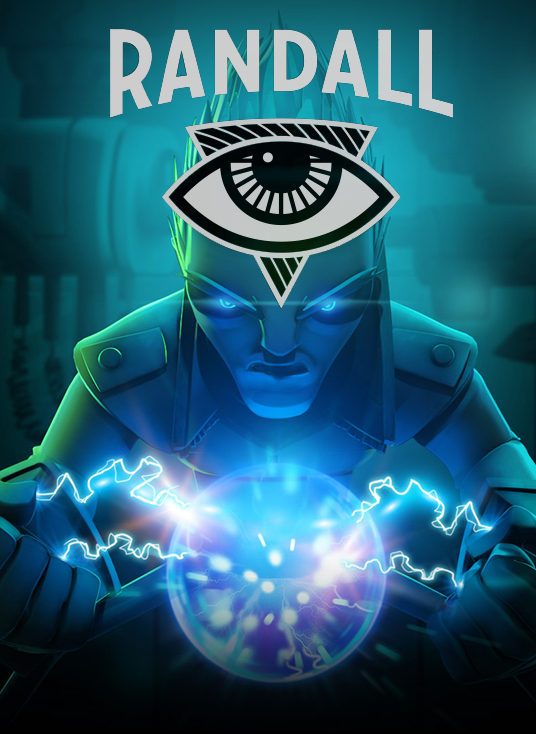 Randall has a couple of problems.  First off, he’s woken up in a dystopian future run by a corporation that just doesn’t care too much about the people who work for it so long as they turn a hefty profit.  There’s also a voice in his head that doesn’t seem like it’s him providing color commentary on his actions and giving advice.  Randall is also far more powerful than he remembers, with skills opening up that would have been awfully handy earlier if only he’d realized his capabilities, opening up new pathways to more and harder challenges.  His biggest problem, though, is that no matter how much he learns, he’ll control like a particularly obstinate donkey, rarely doing what you thought you’d told him to and never being responsive enough to make the combat fun.  The platforming comes off a bit better, but a hit box that’s never quite where it seems like it ought to be doesn’t help when it comes to dodging lasers or saw blades.  Randall (the game) may give Randall (the character) infinite lives, but he wouldn’t need them if a laser singing a single hair didn’t cause instant death.

Take one of the first skills you learn as a good example of controls gone wrong.  Randall has a jump that sends him pretty high into the air, and while you have a little measure of control over its height by pressing shorter or longer, you’ll still gain a good amount of air with even a light tap.  A lot of the jumping puzzles are designed around this, with electrified wires or spike in the ceiling of a low passage where the floor is also lined with insta-kill hazards.  Even a light hop is going to be a problem, but when combined with the dash move you get a low distance-covering jump with Randall translating the upward movement into a mid-air roll.  There are several areas that make use of this kind of jump in interesting ways, whether just avoiding danger overhead or providing the distance needed to clear a problematic gap when the ceiling is too low.  And if the jump worked without invisibly sending Randall forward a bit to die against spikes if he’s just a hair too close, it would be a good mechanic.  Get the lead-in distance wrong and you not only die, you see the death without actually watching Randall move forward into the trap to hit it, instead basically teleporting from standing to the spot where he disintegrates. 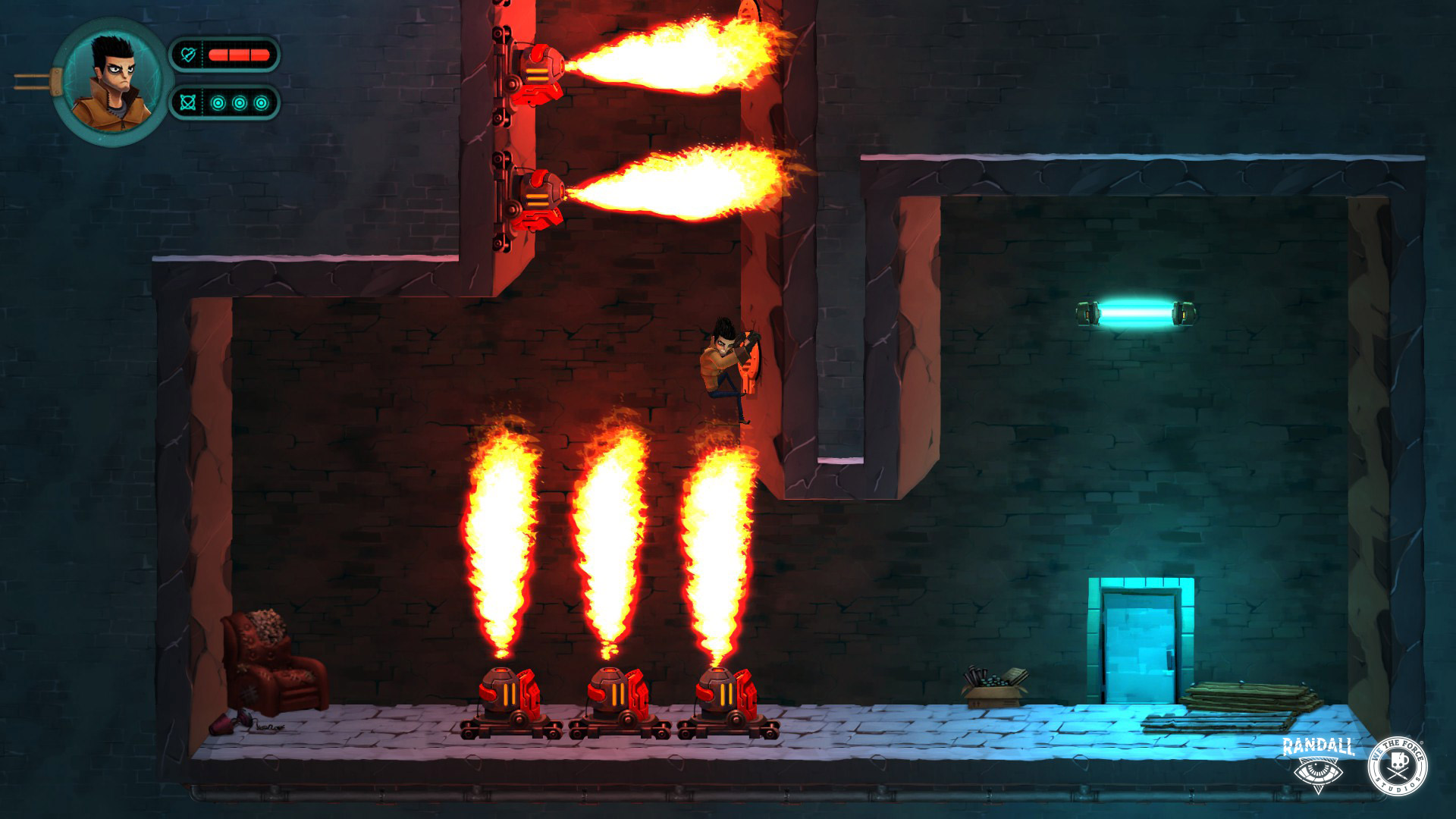 Another mechanic learned early on is the ability to hang off things, usually spots on the wall but also dangling fixtures.  They’re usually color-coded yellow, making it easy to figure out what you can grab and what you can’t, plus you need to manually activate the grab with a pull of the right trigger.  Got a fixture that’s a problem?  Don’t use it, but rather keep on sliding down the wall.  There are some clever challenges that can go with that mechanic, but one of the earliest ones was almost a game-breaker because Randall can’t jump from the grab-point, and instead can only drop straight down onto the electric trap below.  Between this sentence and the last I went in and re-tested this section, and while it works just fine on backtracking, approaching it from the left as you would the first time you get there simply doesn’t work.  You need to time the drop just right and not use the bugged handhold to get through, although if you want to go back the way you came it works just fine.  Most other bugs are simply annoying, such as when the camera focuses on the wrong screen when you respawn so you need to drop down to be visible again, but this one was very close to being a game-breaker.  As is, for that matter, the cursor on the title screen always defaulting to New Game, making it worryingly easy to accidentally erase your current progress.

Combat is another area where Randall just can’t keep up.  He’s got a good set of moves, and getting a combo of five or greater earns back a bit of health, but his moves are so stiff and unresponsive that it’s best to stick with the three-hit combo while taking the occasional punch.  Dash-then-punch should be a satisfying way to link one enemy to the next and keep the combo alive but 1) the combo only works with damage dealt over a short period of time so the dash doesn’t count and 2) Randall doesn’t seem all that interested in pulling off the dash when coming out of a hit chain.  Punch punch rest dash, rather than punch punch dash.  It utterly kills what should have been a nice combat flow, even when taking into consideration that you can only hit one enemy at a time even if they overlap.  Randall eventually learns multi-enemy-targeting psychic moves, and can even do a mental stun that allows him to ride and control enemies to access unique abilities and get past otherwise-inaccessible areas, but even that’s a letdown because most enemies only have the one attack and aren’t that fun to control. 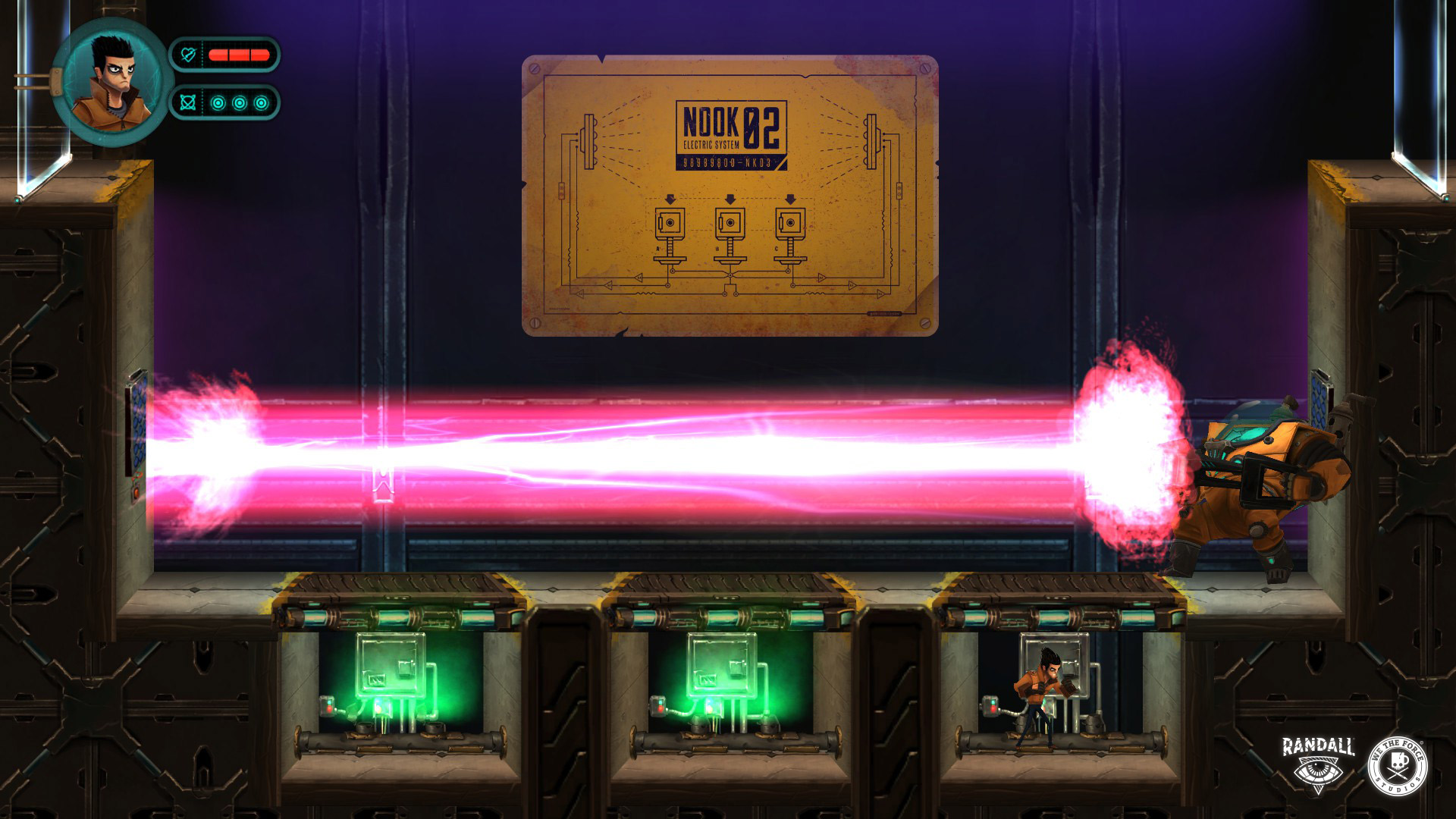 Randall should be better than this.  It’s got all the elements in place to be good but they just don’t work right.  There are some clever jumping puzzles that require the player to have pinpoint accuracy and consider jump height and how it relates to distance and not bouncing off the ceiling.  The combat moves are well thought out, Randall’s abilities are used constantly in every area and the level art looks great.  If Randall had the controls to match then this would be a nice little sleeper, but the pieces never come together to make it fun to play and the bugs drag it down even further.  There are a lot of ways Randall could have been good, but without a character who can keep up with the action, it never manages to rise above being just plain bad.