There’s so many Warhammer games to keep track of as of late, with the Total War: Warhammer series getting a sequel and Dawn of War III having just released; meanwhile Neocore Games had released the alpha build for their newest title, Warhammer 40,000: Inquisitor – Martyr. Unlike the Adventures of Van Helsing series, you aren’t running around as Van Helsing killing vampires and werewolves — instead demons along with their cultist comrades.

Neocore mentions that there will be three classes available, however in the alpha there was only the crusader class available, with three subclasses to choose from. There’s only mild differences, that being there’s a ranged heavy option, a balanced option and one that’s focused only on close combat. Expecting some fast paced combat from the Van Helsing series, it was quite the opposite. There was an arduous amount of time invested spent stomping around looking for enemies to kill. There’s only so many variations of enemy types and the satisfaction of brutally making a dreadnought topple over with blood gushing really only clicks for the first time. After you fight more, it’s more of a time kill, waiting that health bar to steadily decrease until the lumbering hulk is dead. 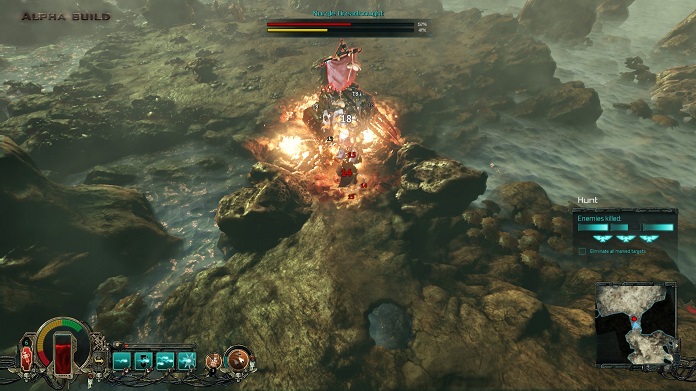 Standing toe-to-toe against a dreadnought should instill little to no fear. It will die eventually, and hopefully in the final build you will be graced with a death animation of ripping it’s head off.

The alpha is not a full representation of the game, but that doesn’t mean it isn’t without flaws – the close combat is missing the oomph of what it would be like as not even a space marine, but an inquisitor armed to the teeth with the most powerful of weapons in the imperium. The amount of gore on screen could be more. Early screens made it seem as if combat was going to be a frenzied bloodbath, but after you kill the set amount of enemies in an area, it’s rather shallow in the current build. In addition to combat, there’s not enough death animations as is expected of boss battles or even larger enemies. That first experience of killing your first chaos dreadnought loses its touch if you gun it down and it just falls over. Taking a look at the Blood and Gore trailer below, there’s some really brutal death animations but I never experienced one throughout my time in the game.

There isn’t quite enough in the alpha to make it feel exciting. From destroying a pillar to land on enemies, or blasting enemies with a grenade, everything feels slower than it should. There’s little to no reason to hide behind cover, and in that sense, it doesn’t feel like the great halls of empty ships have enough enemies. I found myself retracing my steps to find a little nest of enemies to finish a level and the droning heavy metal music didn’t keep me pulled in. Gaming sessions were short in part of the lacking level design.

This is in some ways a loot-based action RPG, and the amount of loot is sparse. Even after completing mission after mission, skills went up, which in turn made it easier to chop down enemy health bars, but I found myself getting weapon upgrades through purchasing them rather than by finding an amazing weapon hidden under the corpse of a chaos dreadnought, but alas, this happened all but once. 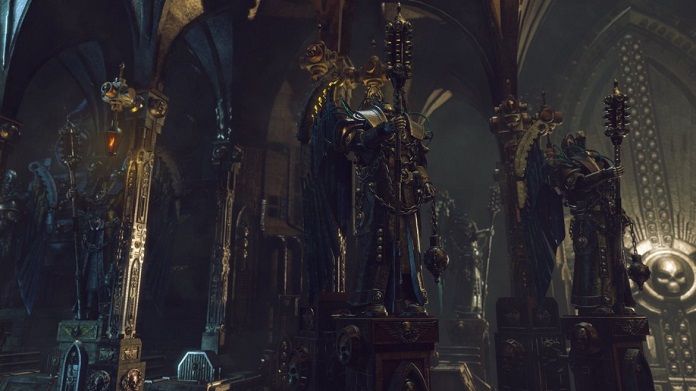 Sound was probably the game’s high note, building on the Gothic aesthetic of the game. Doors open, letting out a metallic groan, while some enemies will release a scream or death throe when you cut them down with your blade.

Seeing where the game is now, if Neocore Games can build on missions to have a solid story line, Warhammer 40,000: Inquisitor – Martyr can become as memorable as the Adventures of Van Helsing. With countless action RPGs having released, Diablo III coming up with a new expansion and the likes of Path of Exile, it will be hard for Inquisitor to stand up tall against these behemoths in the genre. If they can expand and fulfill the promises of an open-world sandbox game without repetitive missions and reused maps, Neocore can make this game worthwhile. I’m looking forward to the other classes available when the game launches, as the crusader class seems relatively tame in contrast to playing as a fast moving assassin, or blasting enemies into blood fountains as a psyker. In its current state, it’s clearly unfinished, but even so, there’s optimism – if Van Helsing’s high production value can be looked upon, the future might be bright for the emperor’s secret weapons in Warhammer 40,000: Inquisitor – Martyr.