I believe it’s safe to say that there are a lot of games in the app store that don’t live up to their name in the most literal sense. After all, the majority don’t have a decent literal translation to even qualify, but One More Brick does in both senses.

One More Brick is a game by Rifter Games where your main objective is to clear all of the bricks on the screen. In its simplest form, all you have to do is tap the screen then move your finger in any direction and release. Obviously, there’s a lot more to it but until you make it to the higher levels that’s the part that will get you in a trance and playing the most. You’ll just fling the balls in whatever direction you choose and watch them hit the bricks until they’re destroyed. You’ll be playing the game and just thinking to yourself, “I’ll just do one more round until I lose.” Then, out of habit, you’ll quit out of the game before the game over and start a new round to skip the ads and say that phrase over again. 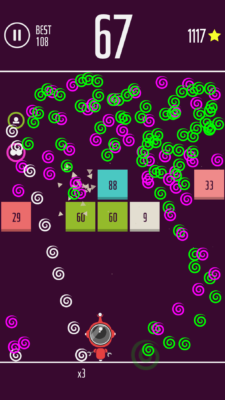 Here’s how One More Brick works. You start out at level one and that basically corresponds to the number of balls you have at your disposal. After shooting a ball whereever you want to maximize your coverage, you’ll wait until the balls hit the bottom again and then the level shifts down. When the lowest brick makes it to the bottom it’s game over and you restart. If you happen to clear a level of bricks you earn a checkpoint at whatever level that is and you’ll restart there if you lose. How do you clear a brick? There’s a number on every one of them that is the number of hits it takes for it to break. Get it to 0 and you’re good. 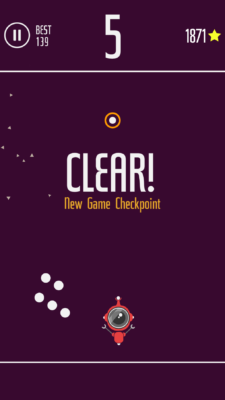 Along the way, there are a couple of things you can capture to make your life easier. The first item that you should notice is an orange circle surrounding a ball. That’s how you earn more balls to use. Hitting that with on clears it and you’ll have it on your next shot. Next up is a ball with a person icon in it. This power-up changes the color of your ball when it hits and allows you to get another bounce once it hits the ground. It’ll go back into the field of bricks and do some more damage until it drops again and it’s out. Similar to it is the power-up two balls inside of it. This one splits your shot in, what I figured to be, a random direction giving you a split shot so to speak. Whenever a normal colored ball goes through it’ll split, meaning you can cross through it multiple times and get the power-up on the same ball. Lastly, there’s a double ended arrow that shoots a beam damaging every brick in its path. For every pass through it counts as one hit. These come in vertical and horizontal directions. It’s not a power up, but the last item you’ll see on the screen is a skull and that eats your ball if it hits. You lose it for just that round and the skull, like all the other power-ups, will disappear once it’s used. 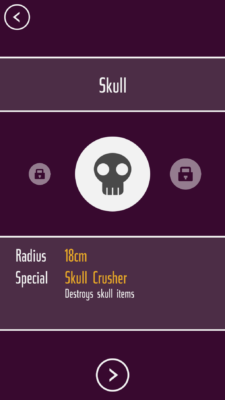 Along with the power-ups in the level, you can purchase balls with stars to augment its abilities. There are a lot of options available and they cost varying amount of stars, but they open up a lot more play during the game. For a seemingly simple game, One More Brick is the most addictive I’ve played in a while. If you’re bored with nothing to do, check it out. You may find yourself playing it all the time without noticing like me. You can download One More Brick here for iOS and here for Android.