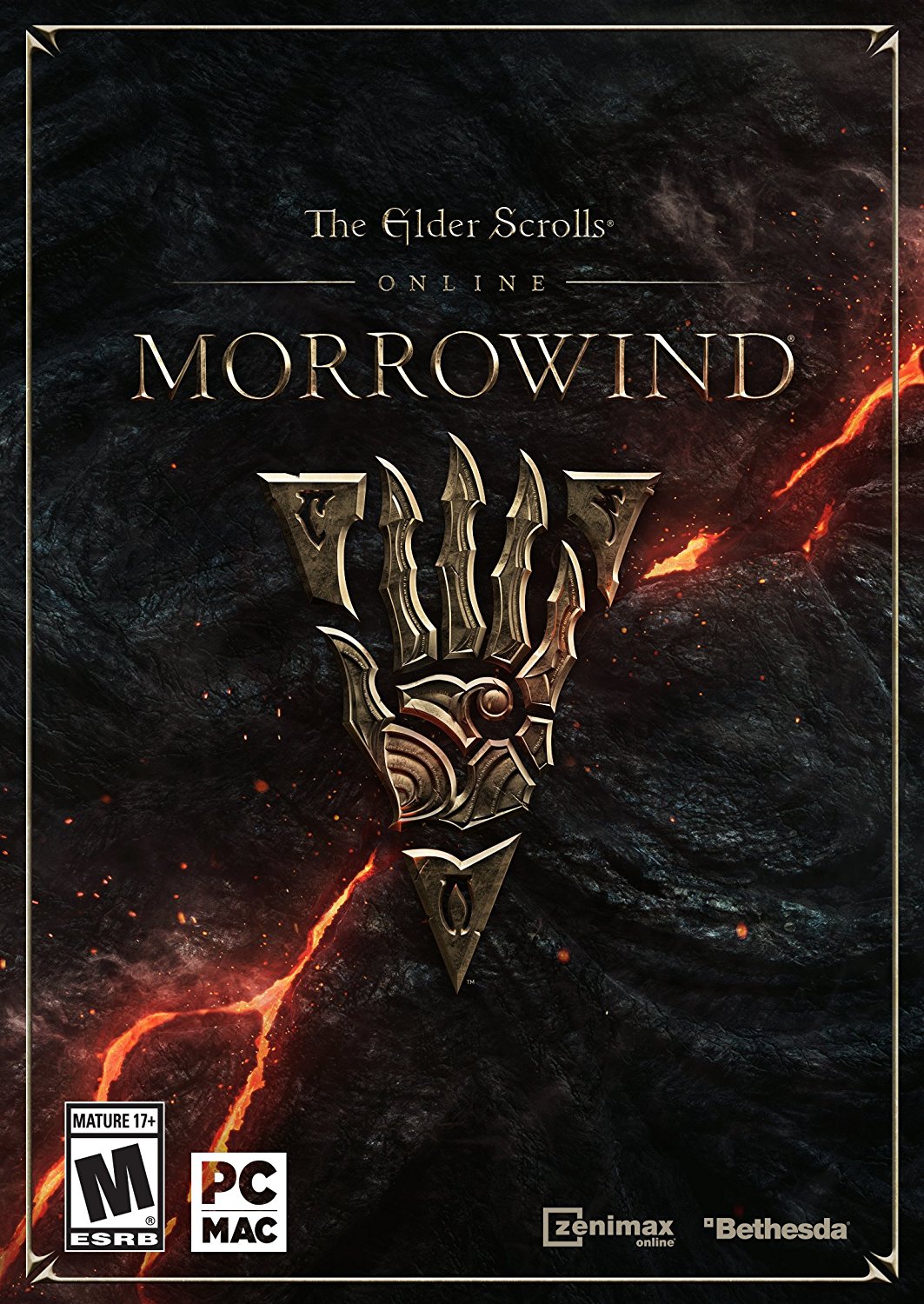 Ever since the original release for PC in 2014, The Elder Scrolls Online has received countless updates and numerous expansions, revamping the gameplay and adding new content to keep players interested. The newest addition, The Elder Scrolls Online: Morrowind, is meant to be more than just another basic expansion with a vast new location, new character class and other additional content and features. This new chapter is designed in a way to not only cater to veteran players but also serve as a good entry point for newcomers, where a freshly created level one character can travel alongside someone at level 50 and the game will make it work for both players.

If it wasn’t obvious from the title, the new location in The Elder Scrolls Online: Morrowind is Vvardenfall, an island in the Dunmer province of Morrowind, which is the setting of the third mainline Elder Scrolls game. This content takes place approximately 700 years before The Elder Scrolls III Morrowind, but despite some differences, the unique environment of Vvardenfall is recognizable immediately when starting this area, taking only a couple minutes of exploration to find a domestic Silt Strider ready to ferry the player to a new destination. New and old characters have immediate access to Vvardenfall, and while there is plenty to do here, traveling to the other parts of Tamriel can be done at one’s leisure.

The Elder Scrolls Online: Morrowind introduces the first new character class, the Warden, since its launch in 2014. The Warden is a nature based class, with the three skill lines being Animal Companions, Green Balance, and Winter’s Embrace. Animal Companions involves summoning creatures such as shalks and bears to damage enemies, Green Balance is devoted to healing the player and allies, and Winter’s Embrace is using cold and ice as armor. Developing each of these can be experimented with, and they offer enough versatility to build a Warden that specializes an dealing damage, taking damage, or being a healer. In addition to being able to wear any necessary hat in a Guild, the versatility of the skills make this a good character class for antisocial MMO players who enjoy playing solo, but most importantly there is just something inherently enjoyable about summoning a creature to fight for you. 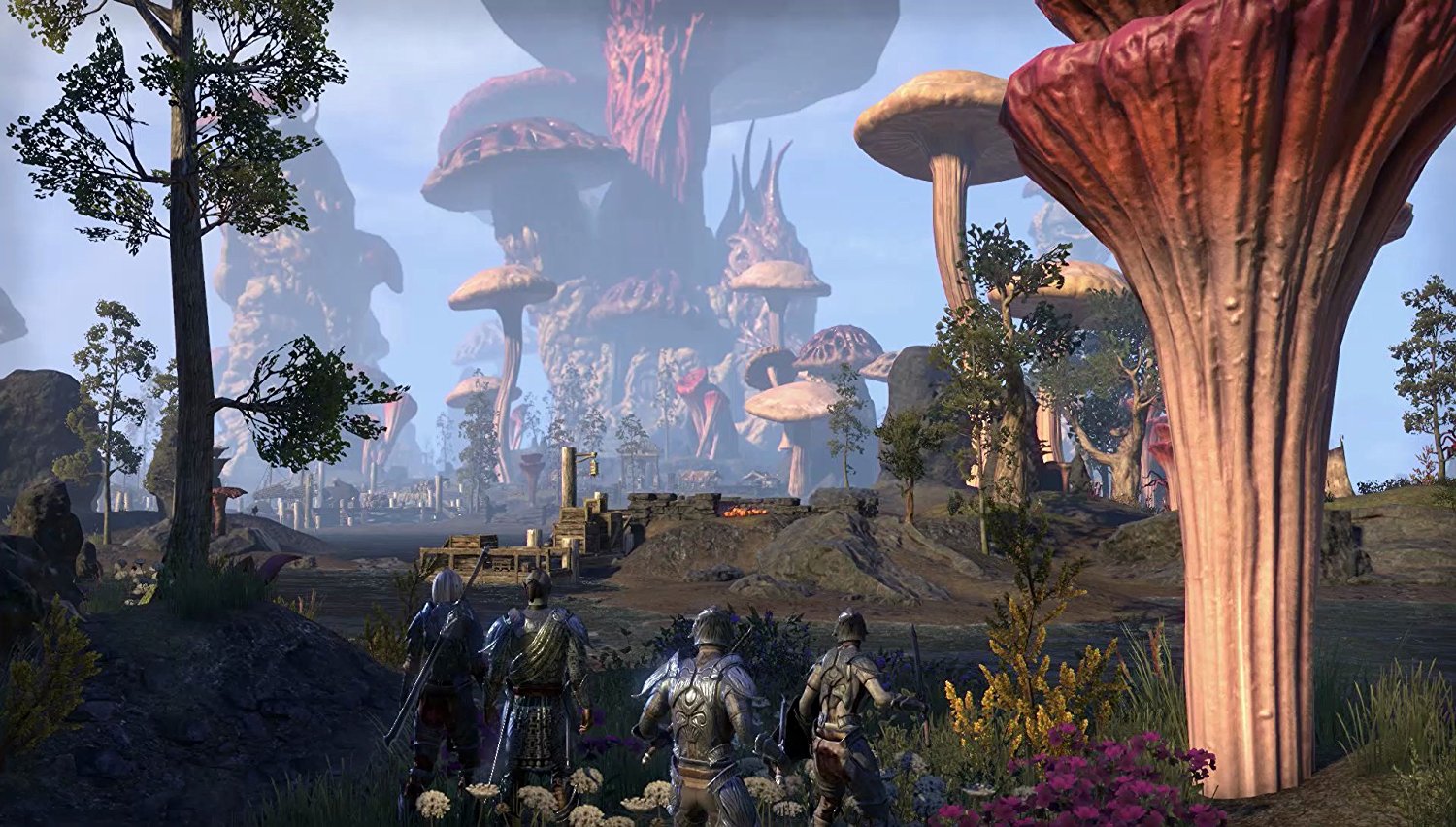 One of the fun activities in an MMO is meeting friends online and killing them. The Elder Scrolls Online: Morrowind introduces a new PvP mode called Battlegrounds. At launch, there are three different modes for Battlegrounds, Team Deathmatch, Capture the Relic, and Domination. Battlegrounds are available once a character reaches level ten, and they consist of three teams up to four players, or 4v4v4. These are meant to be quick skirmishes, with a time limit of only 10 minutes, making it easy to throw down in a few matches without having to set aside a huge chunk of the day.

Beyond the addition to PvP, the main story content in The Elder Scrolls Online: Morrowind should take approximately 30 hours, and despite this being an MMO and being meant to be played with other people, the world of ESO is now a friendlier environment to those who wish to adventure solo. Two new public dungeons and six delves have been added to give players plenty to do. The dungeons are large areas teaming with monsters and numerous bosses, whereas delves are smaller dungeons that typically have some quest associated with them and can be tackled solo without any problems. The Homestead update that was introduced to The Elder Scrolls Online earlier is factored into this new chapter, and two new houses have been added to market and players are able to settle down and call Vvardenfall their home.

Everything discussed previously amount to a lot of changes that come to the online version of Tamriel with Morrowind, so let’s get into the actual gameplay. The Elder Scrolls Online: Morrowind does not reinvent the wheel, so while quite a bit has changed since 2014, the basic essence of the game has remained the same. In proper Elder Scrolls fashion it is a first person action RPG where players are free to design their own character from numerous races and four different classes. Combat is pretty straight forward, the player can move and weave against their enemies and use special abilities, weak and strong attacks, block, and interrupts to enemy attacks. At its core it is a very straight forward system, but the ability to go completely nuts with making a character with a bizarre myriad of different abilities is more limited than the single player Elder Scrolls games, but there is still a ton of freedom in creating a unique character. To make up for the more structured classes in the MMO, The Elder Scrolls Online: Morrowind balances itself out, so any combination of race, class, and a play style can thrive. 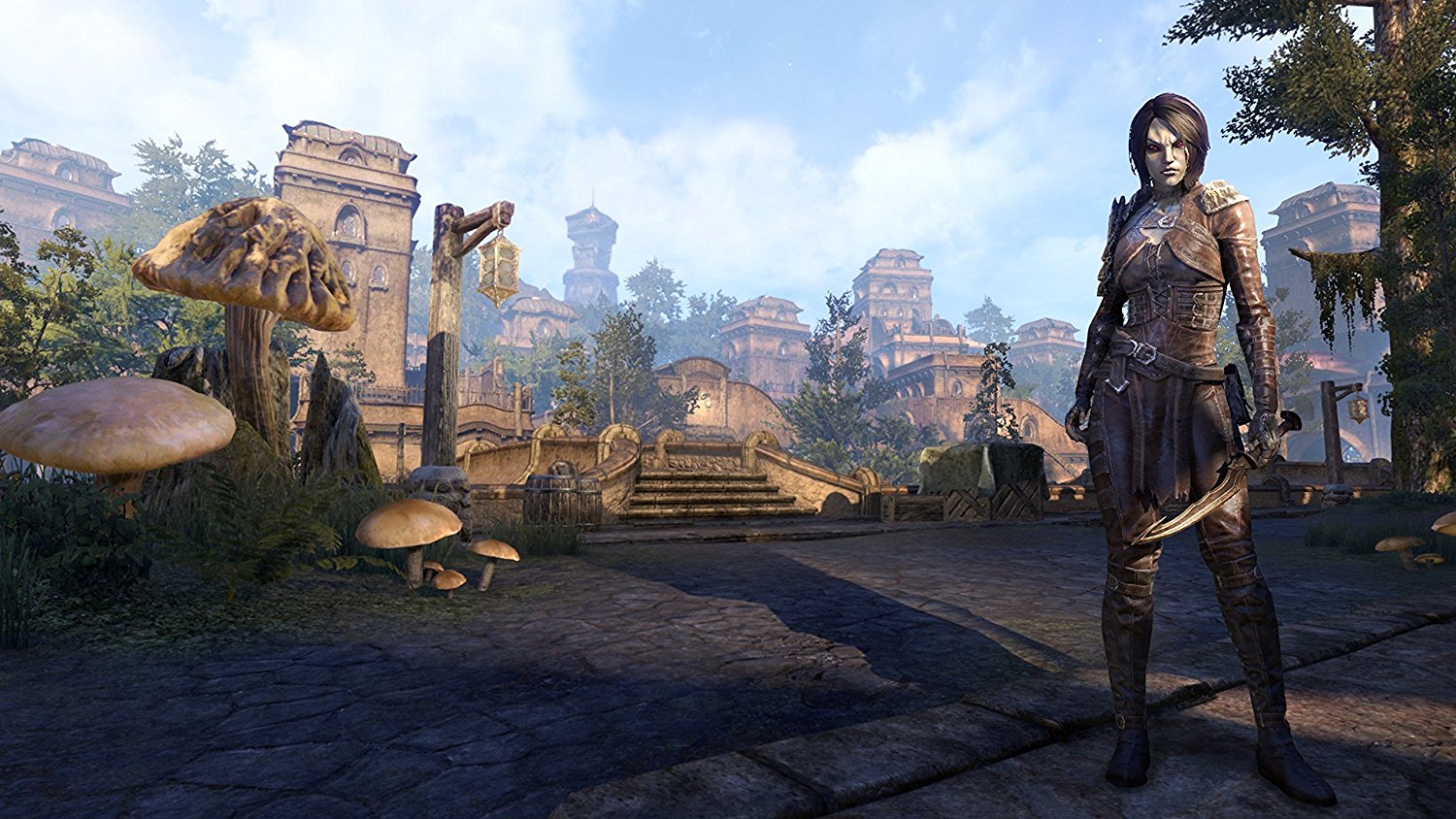 The Elder Scrolls Online: Morrowind does improve The Elder Scrolls Online in some significant ways. If you tried this game previously and were on the fence about it, this update might be just what was needed to tip the scales in the right direction, but if you absolutely hated ESO initially, these improvements likely won’t able to sway that. It goes without saying that MMOs and single player games are completely different animals and comparing the two is difficult since they both attempt to achieve different experiences. That said, with taking an iconic series like The Elder Scrolls and making it into an MMO, long time fans are likely to use the mainline games as the measuring stick for the MMO. That is my segue into doing precisely that since my interest in the MMO was generated from playing Daggerfall, Morrowind, Oblivion, and Skyrim.

The Elder Scrolls Online: Morrowind does maintain enough Elder Scrolls DNA to attract and maintain fans of the main games. The main difference is the MMO feels more simplified and less immersive from the single player titles, though simplifying character builds into set classes with a choice of abilities makes sense in the context that ESO inhabits. But part of the appeal of MMOs is the interaction with other players, whether it is forming an alliance or waging war against each other. If someone enjoys The Elder Scrolls and wants an MMO, this is the perfect game, but if you want something to enjoy alone, The Elder Scrolls Online: Morrowind is designed in a way where it can be played by yourself and remain enjoyable. It just won’t be as rewarding as the other games in the franchise. 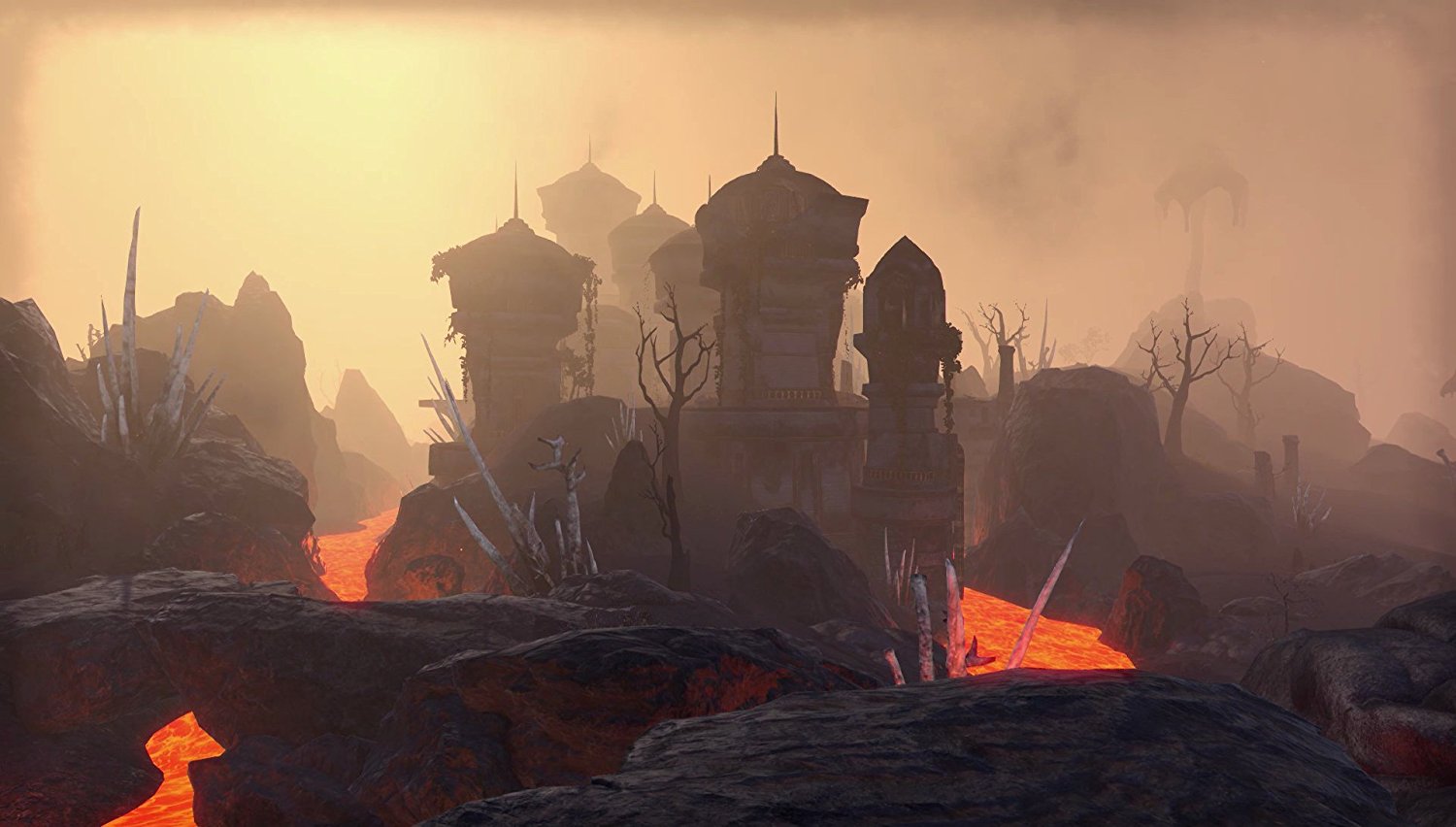 The Elder Scrolls Online: Morrowind is an impressive new addition to an already solid MMO. The Elder Scrolls Online has been constantly evolving since its initial launch, and the new content introduced in this chapter builds upon these improvements. There’s plenty to do in Vvardenfell, a land with consonants to spare,  but one of the greatest strengths of this title is the level of accessibility. Any type of character build can work in this game, and players of all levels can play together and things will balance themselves out so everyone can have a good time. Plus, for the times when you may want to play alone, this MMO does actually provide a good solo experience. Whether someone is a long time player, new to the game, or has played before and taken a lengthy break, anyone can jump in and experience new adventures in Vvardenfell.