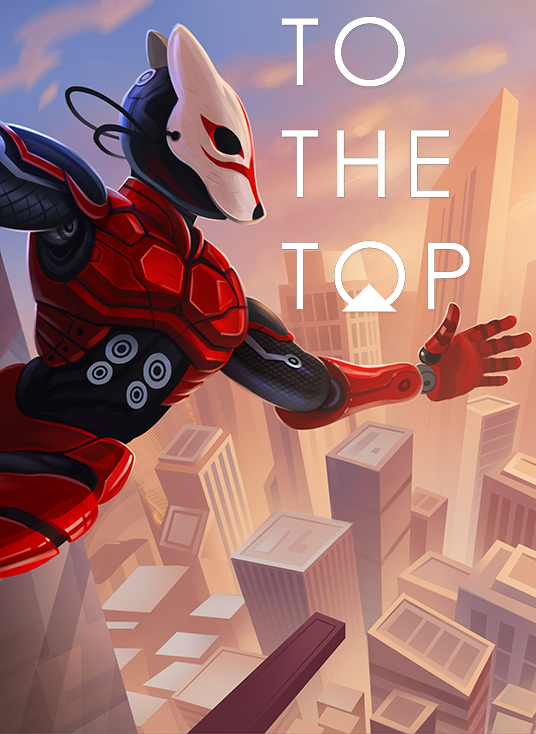 It’s fun to be a frog.  Hopping everywhere on land while your sticky hands cling to surfaces makes for a great mode of locomotion.  While technically To the Top features a limbless body with a floating mask and disembodied hands, looking far cooler than a green amphibian could hope to, about the only non-froggy aspect of the movement is that you can’t swim.  Or catch flies with your tongue, for that matter, but there are crystalline geoms to collect so close enough.  To the Top is a VR game where you hop from one grippable surface to another in a race through a vertiginous obstacle course, using the momentum of chained leaps to pick up speed and reach truly incredible heights.

The basics are pretty simple-  Blue surfaces can be grasped, and you can either pull yourself along hand-over-hand or hold with both hands and let go to fling yourself in the direction you’re looking.  Chain jumps together in quick succession to build up momentum and soon you’ll be reaching handholds that initially seemed like you’d need wings to reach.  To the Top wouldn’t work without the sense of depth and space that comes with VR, but once you’ve got in a little practice and can build up a good head of steam you can chain jumps together effortlessly to race towards the end of the course.  Three of the five medals in each of the thirty levels are for good, better, and best times, and once you’ve got the movement system down it’s hard not to try for each one.  The other medals are for turning up all the geoms scattered through each area and finding the secret one hidden on a more difficult path, making for a nice division between speed running and exploration.  Progression is gated by the number of medals you’ve earned, but even if you don’t like being rushed by the timer the minimum medal-count to beat the game is 75, which is a pretty reasonable quest.

With different goals requiring different approaches, the levels in To the Top are designed with replayability in mind.  Aside from different themes, such as city, child’s room, techno-artistic, etc, each level also has different ways to shave time off the run.  Whether that be gaining enough speed to cut corners in the shorter, earlier areas, or entirely different paths with their own checkpoints in the more complicated ones, there are plenty of ways to experiment. 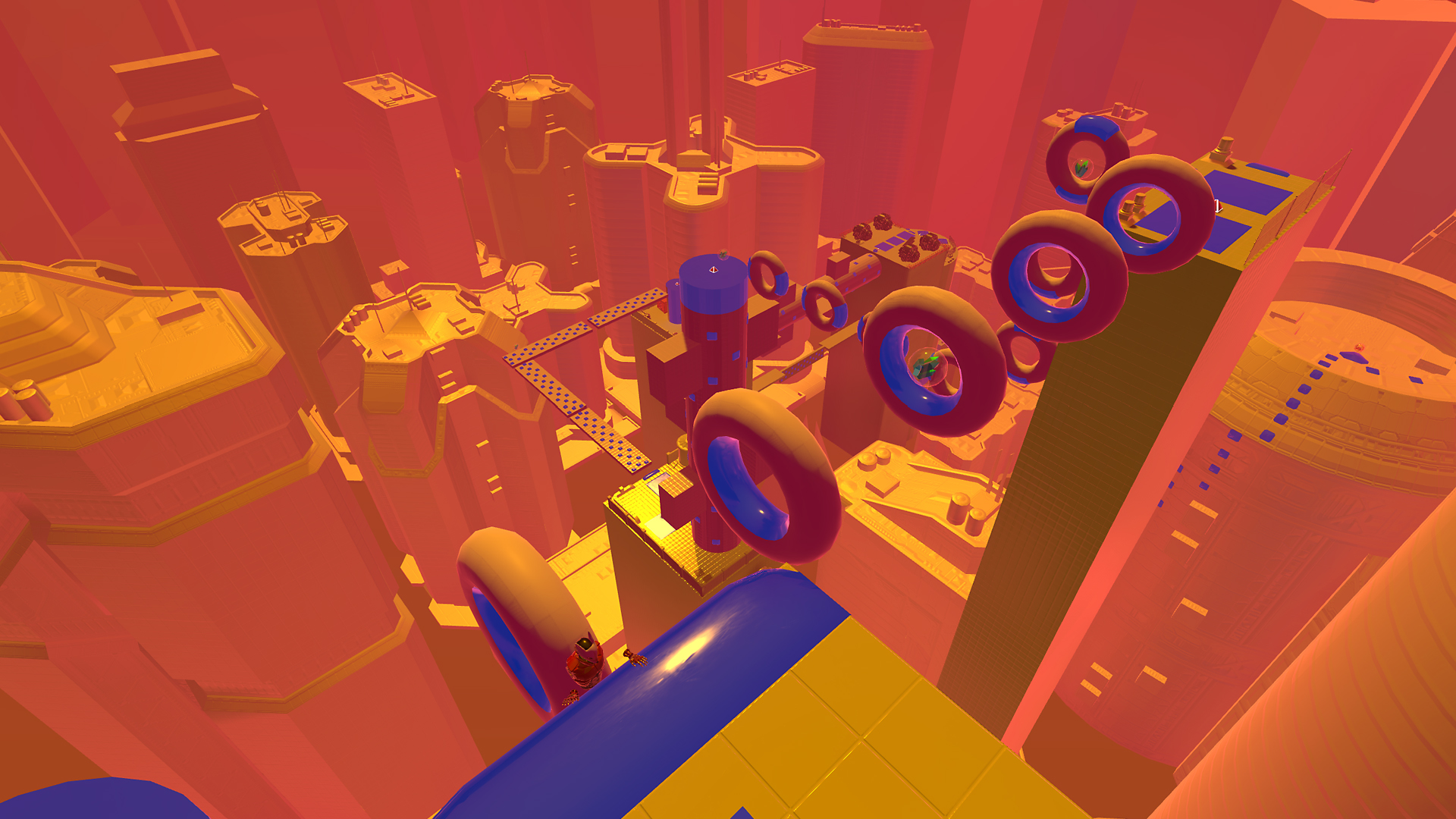 The first tentative steps into the earliest levels only show one simple path, but once you wrap your head around “stare at thing to move towards it” all sorts of options open up.  In my playtime I found the first run through a level was for sightseeing and collecting as many geoms as possible, taking in the scenery and enjoying the incredible feeling of harmless vertigo when dangling off a crane hook hundreds of feet in the sky.  There’s no fall damage, and the penalty for missing a jump is either landing on a spot with nothing to grab, requiring a manual instant-reset to the last checkpoint, or the game auto-resetting back there by itself.  While intellectually you know there’s no harm from falling, though, it’s still easy to look down from the highest areas and feel a bit wobbly.  And then jump off anyway, because there’s a platform down there you know you can reach.

It’s very important while playing, though, to have a well-defined physical area to do it in.  While your disembodied hands have a good reach it’s not infinite, but leaning or stepping forward is a great way to get that little extra distance needed to prevent a fall into the depths.  The levels extend all around you and you’ll frequently go around corners or turn every which way in the course of navigating them.  There’s no Recenter View button so untangling from the headset wire is a regular occurrence, and this is particularly weird when you need to do it gripping a spot hundreds of feet above the ground.  The game is forgiving of this, and once you’ve latched on your hand won’t let go until you release the trigger, but I still found myself keeping my hands together and spinning underneath them as if they were locked in a death-grip to the wall.  Once you’re in the level the illusion is strong, and the real-world intrusion of a stray cable merely disturbs rather than breaks it.  Accidentally punching my monitor or the ceiling was another matter, though.

While that’s not the fault of To the Top, the bugs in the game definitely are.  Loading a level and being taken to the endless VR plain of Steam VR is pretty weak, but dying because of questionable collision physics broke one of the levels and was deeply annoying on many others.  The Giant Robot level starts off like most, with a series of platforms and pads to get through, but you’re going down instead of up.  This is because there’s an enormous robot at the bottom waiting for you, and once you start climbing its sides it starts walking.  It’s a wonderful moment that lasts right until you don’t quite hit a jump fly into a moving part instead, the screen goes black, and you’ve reset back to the bottom again.  Clipping into a wall and back to the checkpoint isn’t fun when it happens on a regular level, and even less so when each attempt at Giant Robot resulted in the same thing happening again and again in different places. 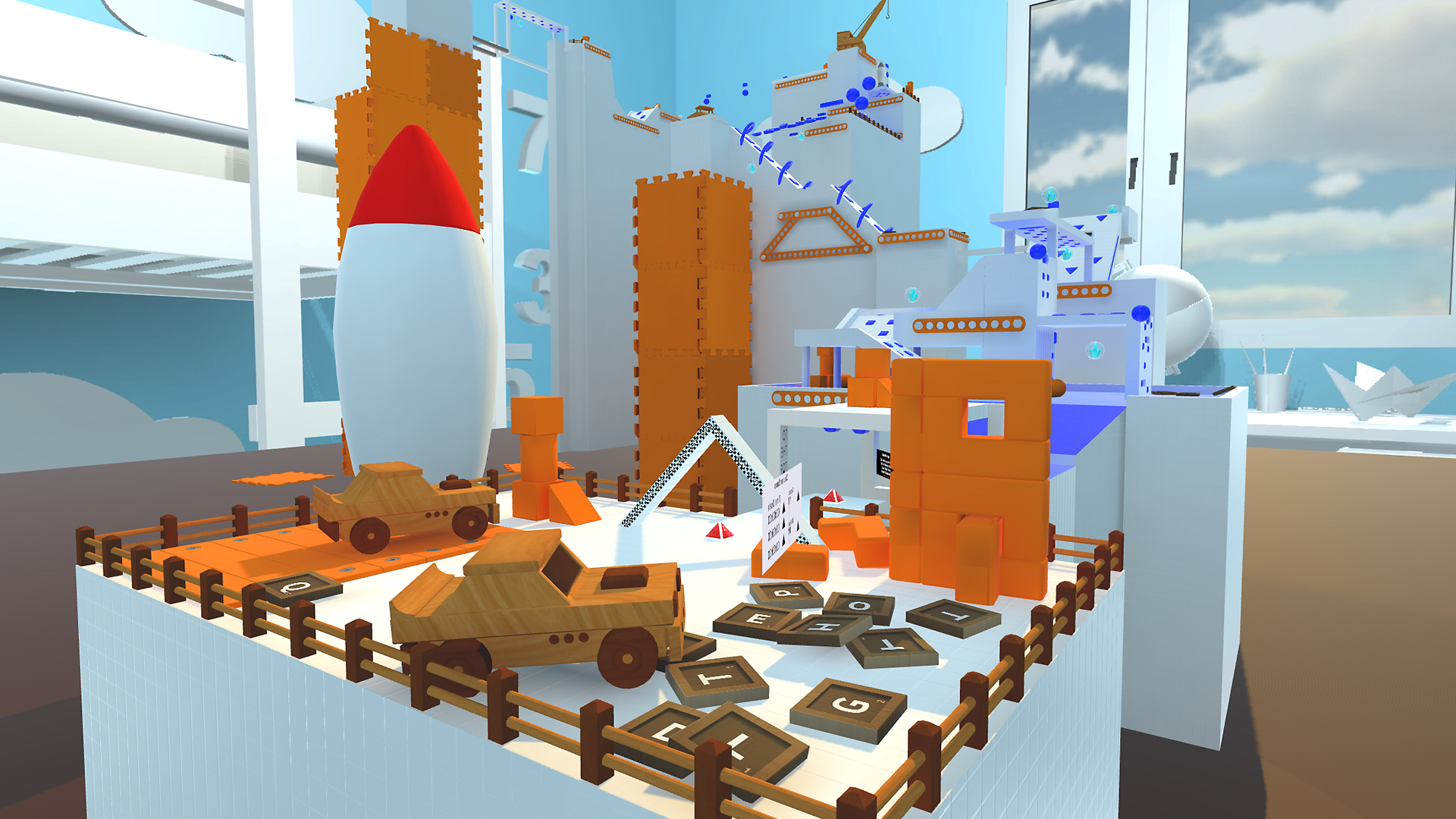 While To the Top may be a bit short on polish its sense of movement is fantastic.  Once you’ve got the hang of managing your momentum you can practically fly through the levels, springing from point to point like a hypercaffeinated frog.  Every level offers something different, whether that be new scenery, air-vortex jump pads, special surfaces that let you skate over them and even one memorable level that gives you jetpack hands.  (That particular level made me glad to play at night when nobody was watching so they couldn’t see me with arms pointed back, leaning forward to get just the right angle to skim ahead at top speed.)  The multiple routes and hidden challenges make each area highly replayable, and while some levels aren’t quite as good as others, at least they’re different enough so if you don’t like one there’s a complete change of pace coming right up.  To the Top is a fantastically creative first-person VR platformer, filled with great challenges and giving the player the tools to handle them if only they can master the techniques.