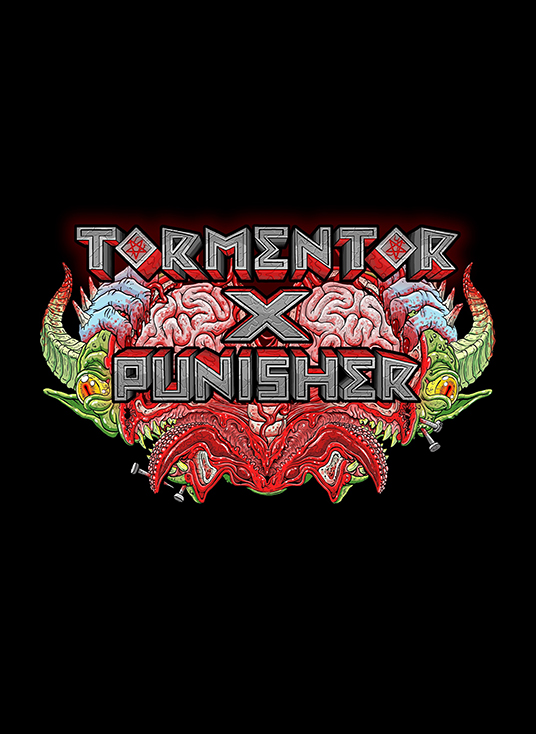 Who is the pink-haired demon killer?  Why is she so self-destructively violent?  What did the demons do to deserve this?  And wouldn’t it be better if we could talk to the monsters?  Tormentor X Punisher is an arena twin-stick shooter that answers all of these important questions over the course of an epic fight for survival on a planet overrun with the most deadly, vile creatures the universe has seen.  Of course, the answers are, in order, Who cares?, Who cares?, Who cares?, and Seriously, what the hell, just shoot the damn things!  They’re demons, you’re a demon hunter, and in the immortal words that kick off each new attempt at surviving a few seconds longer than last time, Let’s F%*$ing do this!

Like any good arcade shooter it’s simple on the surface.  Run with one stick, aim with the other, and the two triggers fire either machine gun or shotgun.  The machine gun has ten shots, the last of which leaves a trail of fire, and you reload with a blast of the shotgun.  Kill as many demons as you can, learn the patterns of the bosses that periodically show up, and aim for as high a score as you’re capable of achieving.  There’s no Win state, just a longer stretch of survival before your inevitable defeat, and like every single enemy in the game you die with a single hit.  A number of things complicate Tormentor X Punisher immensely, though, and the simplest of them is that the bosses only reveal their weak points for a very brief window.  If you’ve got the aim and the timing then they go down easy, but getting the experience to know when and how involves a lot of deaths and practice.  Dying takes you to the scoreboards, where you can choose to see how you rank on the day’s leaderboards or page over to the all-time best, or you can hit a button and instantly restart the next round.  It is disturbingly easy to cycle through one game to the next and the next and another beyond that, and then it’s an hour later and very few attempts have lasted more than two minutes.

The big complication to the action is the powerup system, and working towards a stronger weapon causes about 90% of all deaths.  Once you get a powerup it’s permanent for that run, but it needs to be earned by making trick shots.  The machine gun doesn’t get any enhancements but the shotgun does, and can eventually have homing fire-electric bullets that tear through practically anything.  A big part of the fun of the game is figuring out how to earn the upgrades, so no spoilers, but it takes eight successful trick shots to earn each one.  It’s a huge risk with a nice payoff, but also one that’s very likely to leave you starting the next run after only a very small error in judgement.  Tormentor X Punisher is utterly unforgiving, although in an incredibly replayable fashion. 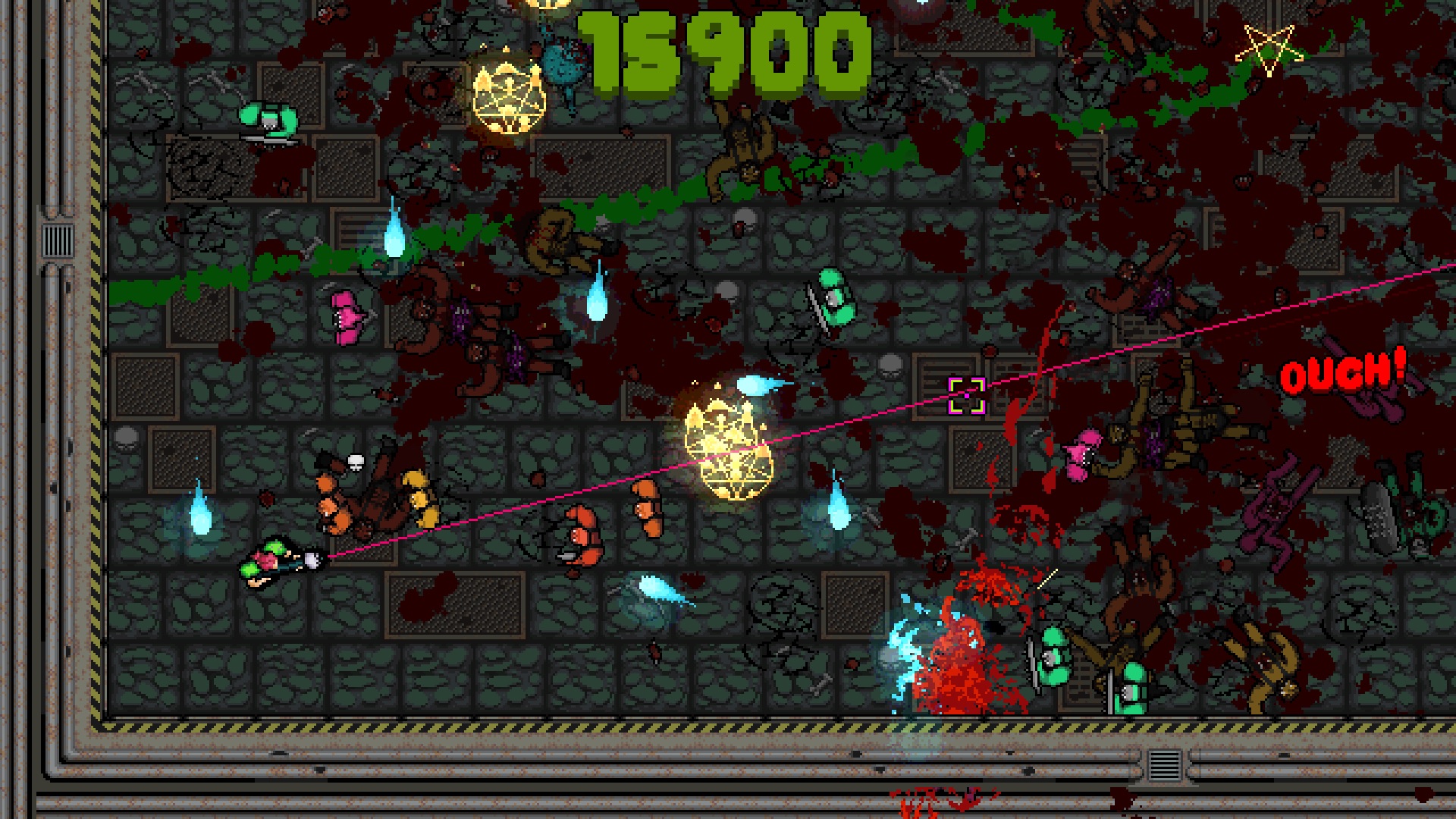 The structure of each run, then, becomes one of deciding which powerups to chase after first.  Wallie is easy, and can be gotten in just a few seconds when you know how, but F*$% You turns the shotgun’s three bullets to five and is incredibly helpful.  Couple it with fire bullets and a blast from the shotgun becomes a flaming death burst, but unless you’re incredibly efficient the arena starts swarming with enemies and becomes much harder to arrange the right conditions in.  Having a small handful of the yellow and orange guys on screen, who simply walk your way and try to bludgeon you down, is much easier to manage in the early moments when there’s only a few walking around than when they’ve been joined by dashing shield bearers and fireball-shooting wizards.

It gets worse, of course.  The arena starts out nice and open but each boss brings with it terrain-changing attacks that hang around after it’s gone.  The golem shoots giant stone slabs, Bigbones explodes into acid puddles, Carrion makes rock walls, and Gutshank leaves behind a giant buzzsaw that travels along the walls.  The clear field of battle gets messier with each new encounter, and the popcorn enemies are more than happy to use it to their advantage.  It really doesn’t matter how powerful you get because the one-hit kill rule is always on for everything in the arena, and making your way through the leftover detritus of each boss fight doesn’t help with survival. 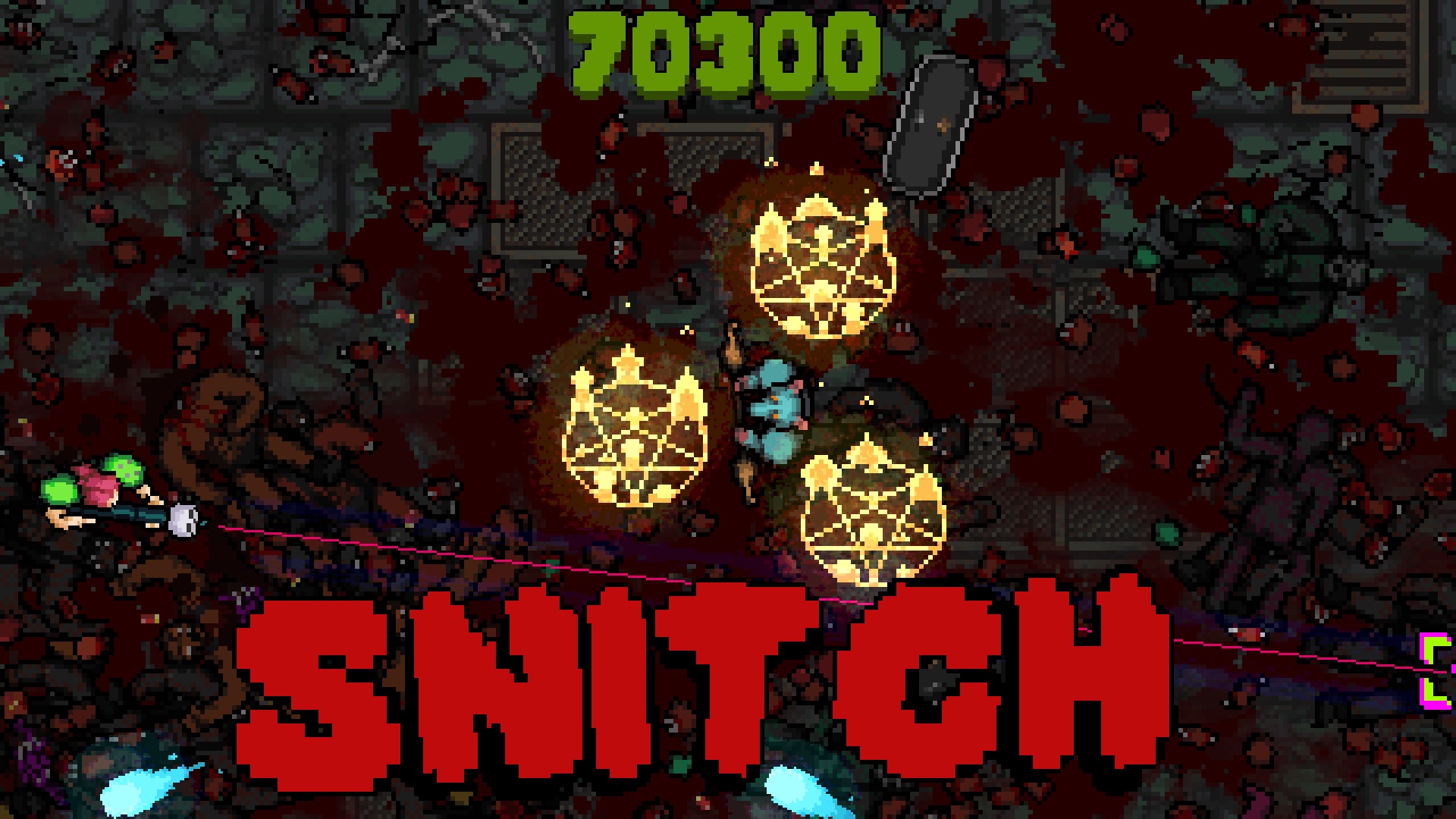 Tormentor X Punisher is loud, mean, occasionally unfair, intentionally ugly and thoroughly awesome.  Its attitude infuses every aspect of the game, from enemy designs, the chunky low-resolution art and especially the excellent voicework that, yes, is repetitive but a major part of setting the tone.  Death is brutal and easy, survival guaranteed to be short, and the leaderboards populated with people who are basically wizards.  Getting a score over 100,000 is a feat to be proud of and I’m not ashamed to admit I’ve only done it once so far.  Dying is inevitable, but not the point of Tormentor X Punisher.  While the pink-haired demon hunter isn’t surviving this, she’s going to take as many minions and bosses as the game can churn out as she swears like a sailor to her last furious breath.