As a developer, Iron Galaxy made their name with fighters. Xbox One and PC’s Killer Instinct reboot, Divekick, and even Capcom’s Darkstalkers Resurrection all saw their work in various forms. So, moving to a third-person action platformer might not make the most sense, but in practice their pedigree is shot through the upcoming Extinction like so many veins of precious metal. Even based on the hands off, pre-alpha live gameplay demo I witnessed, it’s certain that this title is going to be something special.

The demo itself took place in a small village than is being overrun by smaller goblin creatures and enormous ogres that would prefer rubble to the standing structures of the human settlement. Cast as the last surviving member of an order whose sole purpose is to protect humanity, it is up to the player to repel that attack and ensure the survival of the village’s people. 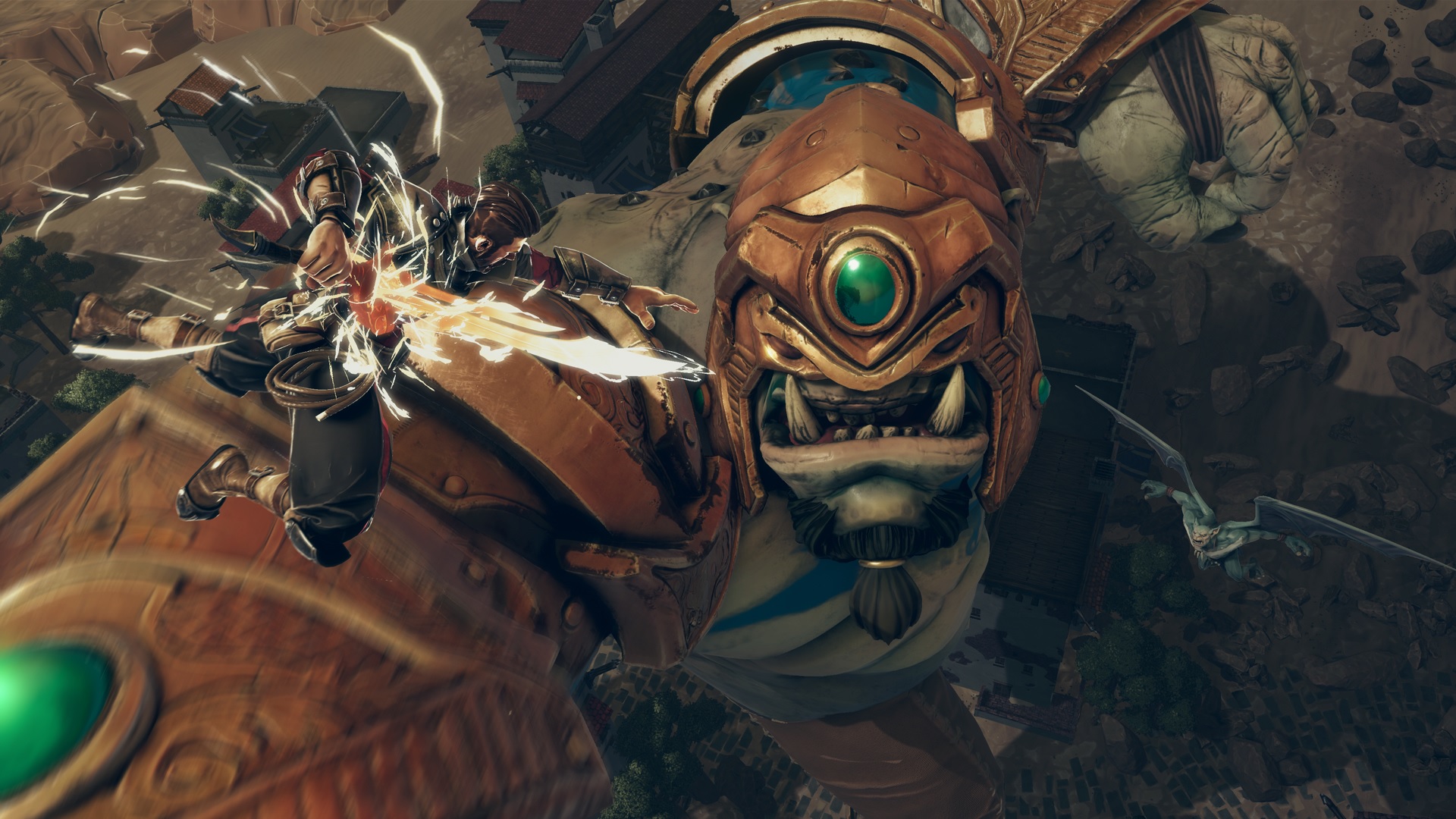 What was on tap was designed to show off two major aspects of the gameplay. First was how environment traversal will work. In a word, it’s magnificent. The player can bounce off of awnings, double jump, air dash, use a grappling whip to continue the momentum, and wall climb with the best of them. Each of these moves can be canceled, allowing the player to correct mistakes, and treat the world as a playground for high flying antics. Stringing together the moves was effortlessly done, causing the game to almost look like a superhero adventure instead of a fantasy title about a monster version of the apocalypse.

The combat itself is meant to draw inspiration from the manga and anime Attack on Titan. Yes, there are lesser enemies that need to be felled, but the true challenge comes from the hulking ogres. When it can time to fight one, the player chose an ogre than was wearing wooden leg and wrist plates. Focusing on the links holding the pieces on, the armor was removed and the limbs severed, leaving the ogre a helpless amputee struggling for survival. Handicapping the monster like this is necessary, as it allows the player to charge up power in the sword and create an easier target. Climbing to the nape of the giant’s neck, the hero made short work of the neck guard. Unfortunately, before the fatal blow could be struck, the beast’s legs regenerated, with the arms soon to follow. Jumping down and being careful to avoid the ogre’s attacks (one hit would kill the protagonist), the player cut the legs short once more be fore grappling back to the neck. With one mighty swing of the sword, the head was severed and went tumbling to the ground, bone poking through the wound. Though it took longer than expected, the villain was stopped before it could cause any damage to the village. (Yes, every structure on the map is destructible.) 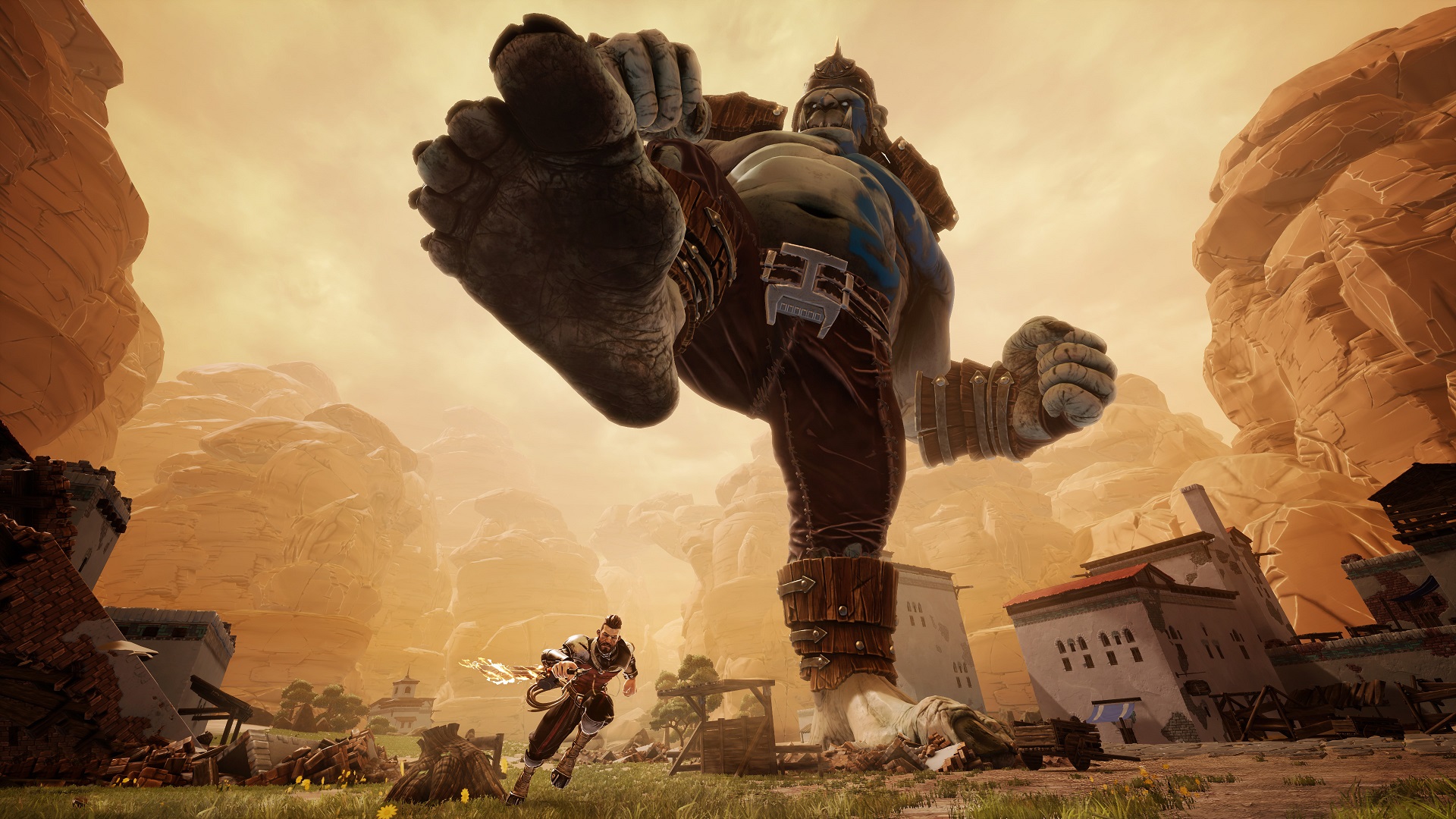 Zipping over to the other ogre, it was located a bit too close to the town for comfort. This one was also wearing metal plate, which would take more effort to remove. Fortunately, the hero’s sword still had a charge from his previous battle, so the hero ascended, removed the neck guard, and administered a malpractice of a haircut. The mission ended, and we were shown the post battle rating screen. Apparently, there were other items that could have been completed to earn a higher ranking, meaning that there will be replay value to perfect the battles.

One thing that was pointed out is that the attacks are based on Iron Galaxy’s experience as a fighting game developer. Button mashing won’t cut it. Instead, proper sword swings and combos will require proper timing to get the most damage out of it. Requiring more skill to succeed is a great thing in my book, and is a trend that I hope to see continue in more action titles. There’s nothing wrong with a mindless action game that doesn’t require the utmost skill to surmount, but a more technical system, when done right, tends to be more engaging by nature. 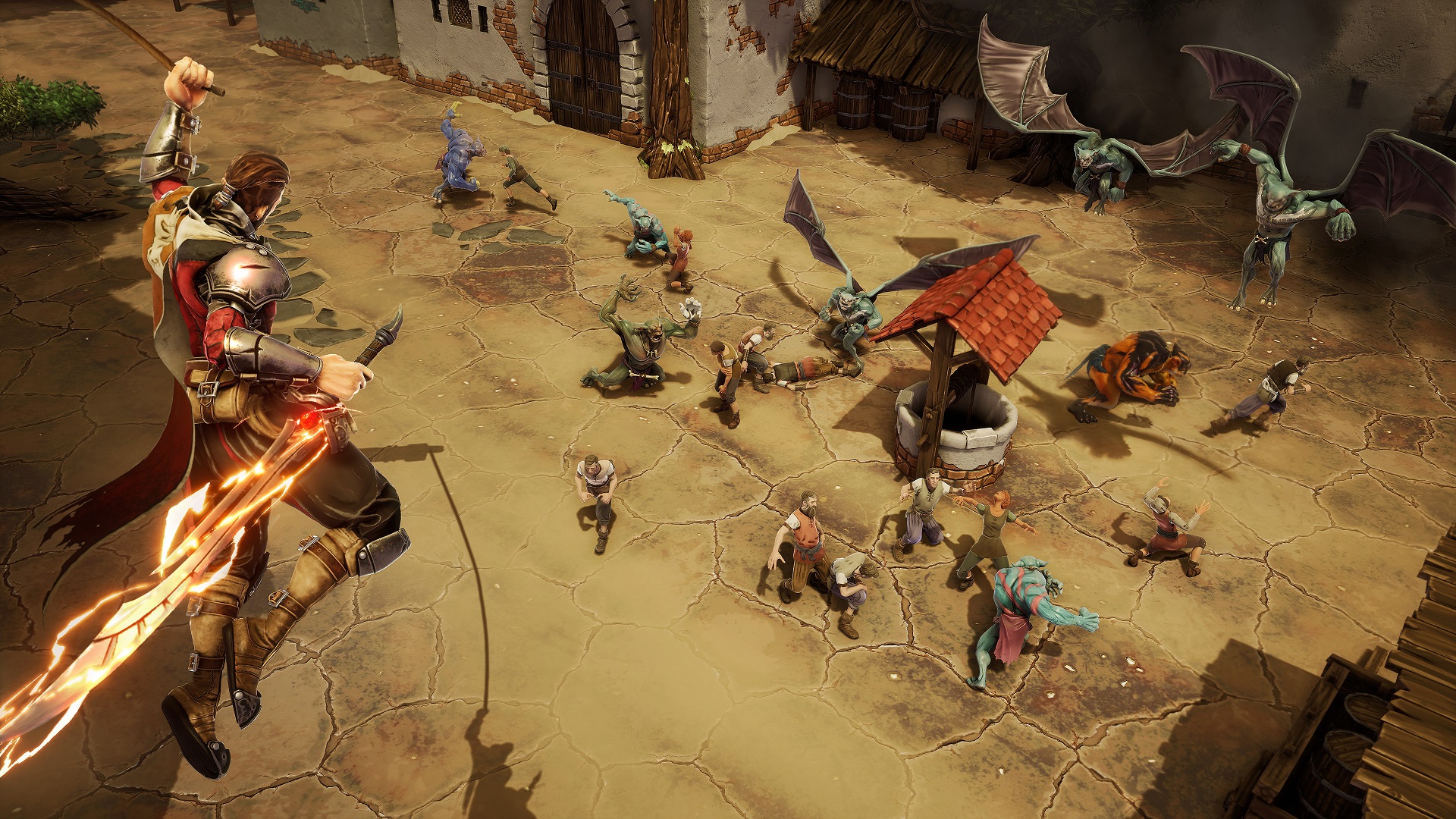 Again, what was shown was pre-alpha footage, but it was more than enough to whet my appetite. I dug the Attack on Titan game, but Extinction looks to take that series’ concepts and gives them a more flexible traversal system, one hit kills from the giants and plenty of smaller goblins to keep the action moving. Right now, Iron Galaxy has a great concept that deserves attention. I can’t wait to see its execution.