I’ve been singing the praises of Survio’s Raw Data since I saw it last year. It’s an action title that takes advantage of VR with tense jump scares, a healthy dose of humor, and more gun and sword play than you can shake a severed robot limb at. The team has been cranking along with that action title as fresh features are added ahead of its impending completion. Not satisfied with having one best in class VR game under their belt, Survios has also been working on Sprint Vector, a racing game that relies on player motion for fluid control in high speed footraces across complicated tracks. Not only is there nothing else like it for VR, it works incredibly well.

It’s wise to acknowledge that this is not a game that looks good in screenshots. The characters look like rejects from the 90’s cartoon reboot, and the environments don’t quite pop the way one would expect from the same studio that created Raw Data. When actually playing, it’s an entirely different story. The art was intentionally chosen to both be easy to discern at ludicrous speeds, removing the “what is that” phase of the decision making process that will need to be completed, in full, in a fraction of a second, and looks great while it’s whizzing by the player. Since this is a game where the player directly controls the movement, Survios wisely ensured to use art that keeps the frame rate up. 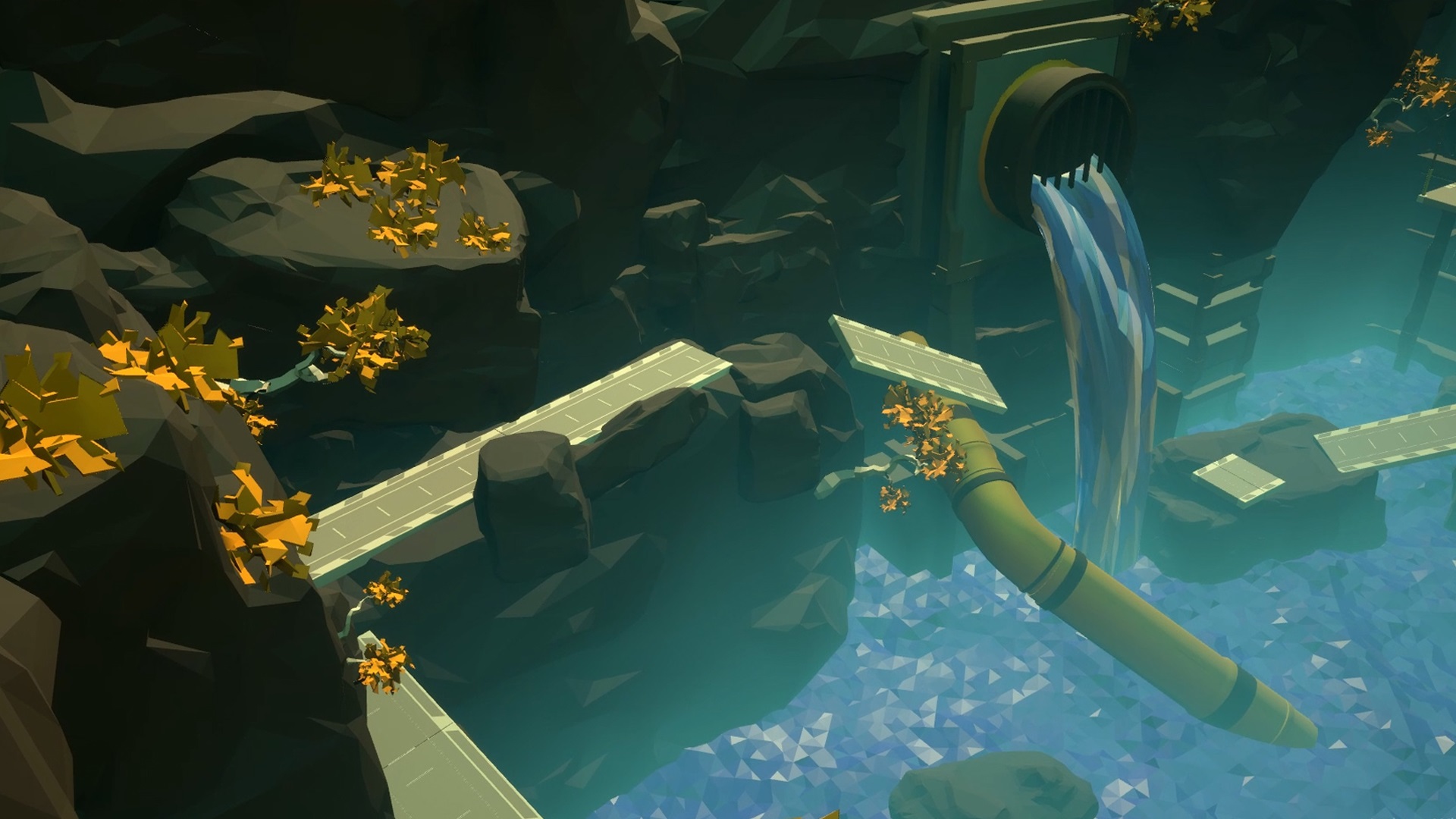 This is also not a game where the controls make sense when explained outside of the context of play. Before donning the headset, I was shown how to run by swinging the Vive wands while releasing the triggers and the proper points in the pendulum. Climbing was described as “reaching up to grab a ball and throw it to the floor,” and jumping was kind of a reverse simultaneous swing of the arms. I politely lied, saying that I understood the controls, and put on the head set. After moving around and testing out the newly added obstacle clearing blast move, I quickly realized that I actually did understand. Soon I was pumping my arms speeding along with the best of them.

After the acclimation period, it was time to do a race. This was a single player time trial, so I didn’t get a chance to go throwing slow mines and the like, but I did get to try out the basics of play. Swinging my arms, I built speed, soon blurring across the track. I tried to get cute with my moves, attempting to jump over tall obelisks that were meant to be steered around, so I hampered my time a bit. Still, up and down my arms went, heart rate increasing, as I hewed as close to the edges of the track as I could to cut down time. Walls appeared that I didn’t so much climb as threw myself up. Nothing would stand in my way, not even my mouth as I accidentally punched myself when trying to regain momentum lost on a poor turn. (I don’t think the Survios people noticed. Shh.)  The end of the race was airborne, requiring me to steer into boosts to shoot my way to the finish line. The end result was a hair over three minutes, which I’m told is good. They wisely avoided giving me the comparisons so as not to injure my already fragile ego.

Here’s the thing: virtual reality games on Steam have mostly been an exercise in sifting through rushed garbage to find the occasional gem (kind of like Steam in general, except with more of a chance to experience an actual negative physical reaction). Most of the good games have been way too short to make them anything more than a novelty experience. Raw Data is shaping up to be an exception to this, as it is endlessly replayable with different characters, weapons and strategies to be used. Sprint Vector is also offering that same amount of longevity in a quality game, with the need to improve times and race against other human players to dominate the competition. With two games that are at the top of their form for VR, it seems safe to declare that Survios has earned its reputation for being the premier developer for the technology.