Pillars of Eternity in widely considered a fantastic RPG that was able to bring the classic aspects of the genre to a modern gaming experience. Unsurprisingly, this gem has been restricted to PC gamers only, giving the self-proclaimed “PC master race” a reason to laugh at console gamers. Those days are coming to an end, as Pillars of Eternity: Complete Edition will be setting sail for the PlayStation 4 and Xbox One August 29 of this year. With Pillars of Eternity II: Deadfire scheduled for a to be determined release date sometime in 2018, this release seems like as good a reason as any for those who missed it the first time around to check it out.

It’s easy to guess what Pillars of Eternity: Complete Edition actually entails. If you were to guess the base game and the two part DLC, The White March: Parts I & II, you would be correct. This includes all updates the PC received, including the expanded party AI levels, increased level cap, and new difficulty levels. Porting an immense game such as this to console from PC does require some tweaks, but these changes are minimal. The controls have been optimized for a control pad so the intricate combat and menu systems will be just as easy to navigate with a controller as it was with a mouse and keyboard. The UI has also been optimized since most of us sit further away from the television than we do our computer monitors. With the exception of these quality of life updates to make Pillars of Eternity: Complete Edition feel at home on a console, everything else remains unchanged from the original PC version.

For the uninitiated, Pillars of Eternity: Complete Edition has the players take control of someone known as the Watcher, who has the power to see people’s souls and read their memories of past lives, a gift he got after being exposed to the energies of souls being drained during some cult’s ritual. This may sound like a super hero origin story and a nifty trick to liven up parties, but there is more serious business to attend to. For example, being able to read souls and access past life memories has a better than average chance of driving a person crazy, as this leads to waking visions and insomnia, and for this the Watcher feels compelled to hunt down the cultists who did this in hopes that killing them will reverse the curse. Or least some fleeting satisfaction from a brief moment of revenge. Spiderman got fun powers when he got bit by the radioactive spider, the Watcher’s deal sounds like the worst super power ever. 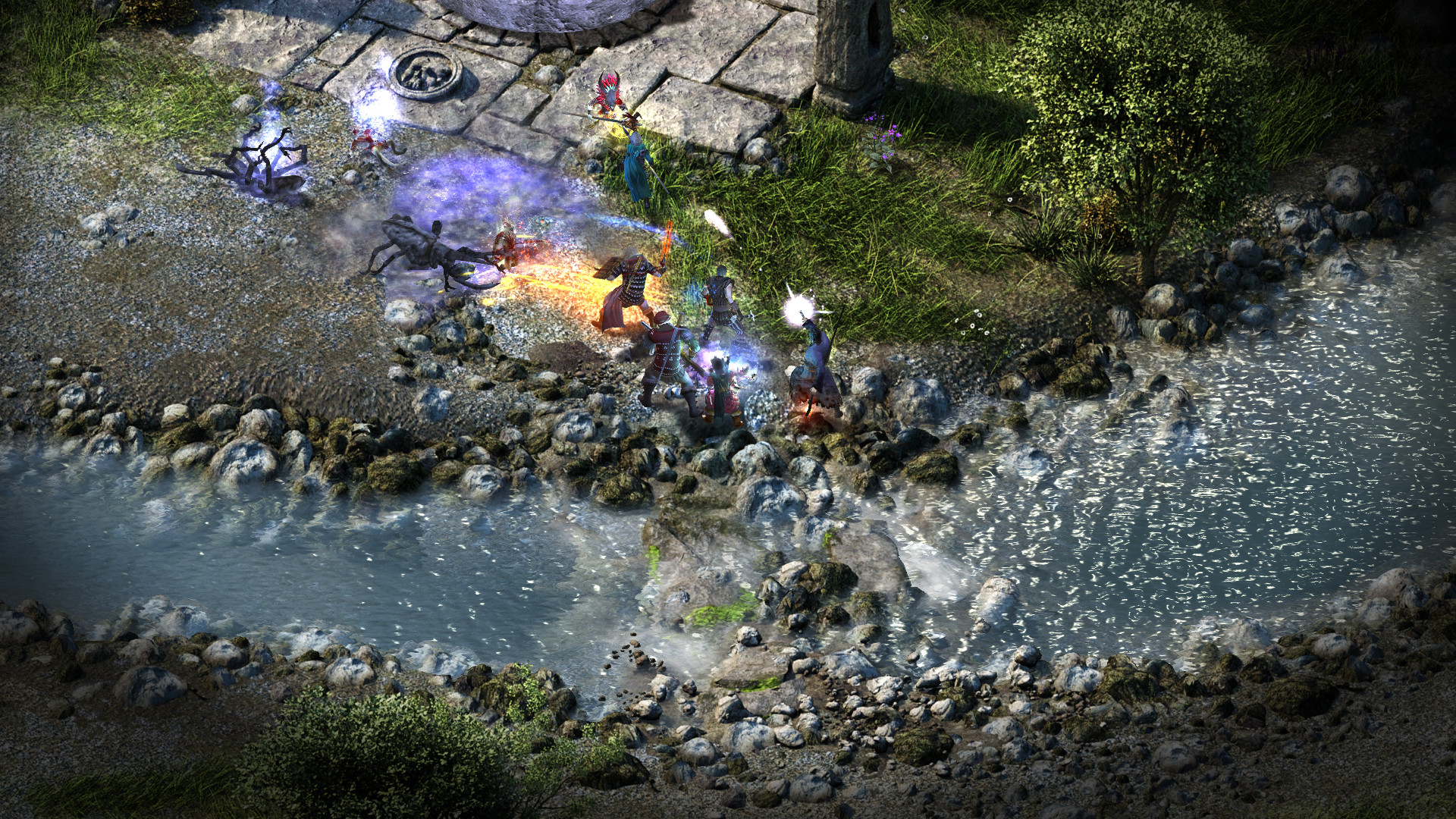 This new ability does prove useful in noticing that the town of Drywood (editor’s note: isn’t that your hometown?) people are being born without souls. This is the result of the Hollowborn Plague, which had some theories about the cause of it but thanks to the Watcher it is deduced that the Hollowborn’s souls have stolen by some nefarious cult, and they would have gotten away with it too if it weren’t for that meddling Watcher. And from this point the Watcher and his companions venture forth in their heroic quest, complete great deeds, and eventually save the day, though the exact ending will vary depending on what sort of choices the player made throughout the game.

Pillars of Eternity: Complete Edition features near infinite character creation options with different classes, races, and background stories to create a personalized hero and story. This custom hero will be thrust into a beautifully-rendered world where he will encounter numerous memorable characters and shape the relationships with them through his actions and various dialog choices. A complex battle system will dispatch any opposition that stands in the Watcher’s way during his travels as the epic story unfolds. Pillars of Eternity on PC currently has an impressive Metacritic score of 89 and this reissue is shaping up to be a great reason for people who missed it to finally check it out or for veteran players to experience it again in a slightly different way.