Laser League is a modern take on arcade multiplayer mayhem. Two teams of combatants with different abilities face off against each other in various environments where an assortment of different laser traps are deployed. It sounds simple, and it is, but it is also fast paced fun that is a blast to play when you have a few friends over. In a nutshell, it is a competitive ’80s action game if it were made with modern technology. Hardcore Gamer recently sat down with studio director Simon Bennett and discussed this upcoming title.

[Hardcore Gamer] I enjoyed playing the demo. Laser League seems like it’d be a good time if some friends got together and felt like playing some old school games. Can you describe the basic premise of Laser League?

[Simon Bennett] Absolutely. Laser League, at its core, is a simple game about eliminating the opposition with lasers. That might sound really basic, and at its core it is, but ultimately it’s left stick to move and run around the arena and avoid various laser patterns within each map. The depth of the game comes from the different player classes, we have six different player classes to choose, some are offensive, some are defensive, and the combination of those classes as a team against your opposition is how you strategize and beat the other team. Games are really really simple, first to three points wins the round, first to win three rounds wins the match.

Teamwork seems integral to success. When we were playing earlier I was a Blade and my teammate was a Shocker, so the strategy was you stun ’em and I cut ’em.

Absolutely, Shock and Blade is literally one of the first combinations we noticed, and it’s one of the more common ones that we rely on.

Are there any other combinations already discovered that are as effective as that combo?

Absolutely, you can also use a Shock and a Snipe, Snipe you throw a line down and that creates a marker between you and the other player. The moment you use the Snipe ability again it teleslices anything between you and the target. Again, if someone shocks a player in the middle of the field, draw a line between the two and take them down. What we were playing was 2v2, the best way to play Laser League is 3v3. 3v3 as you can imagine is where you start to get a good mixture of classes, a classic mixture of classes in 3v3 might be a Thief to gain possession of the opponents’ lasers, Ghost, which is a medic class, and a Blade or a Snip for a more offensive class. 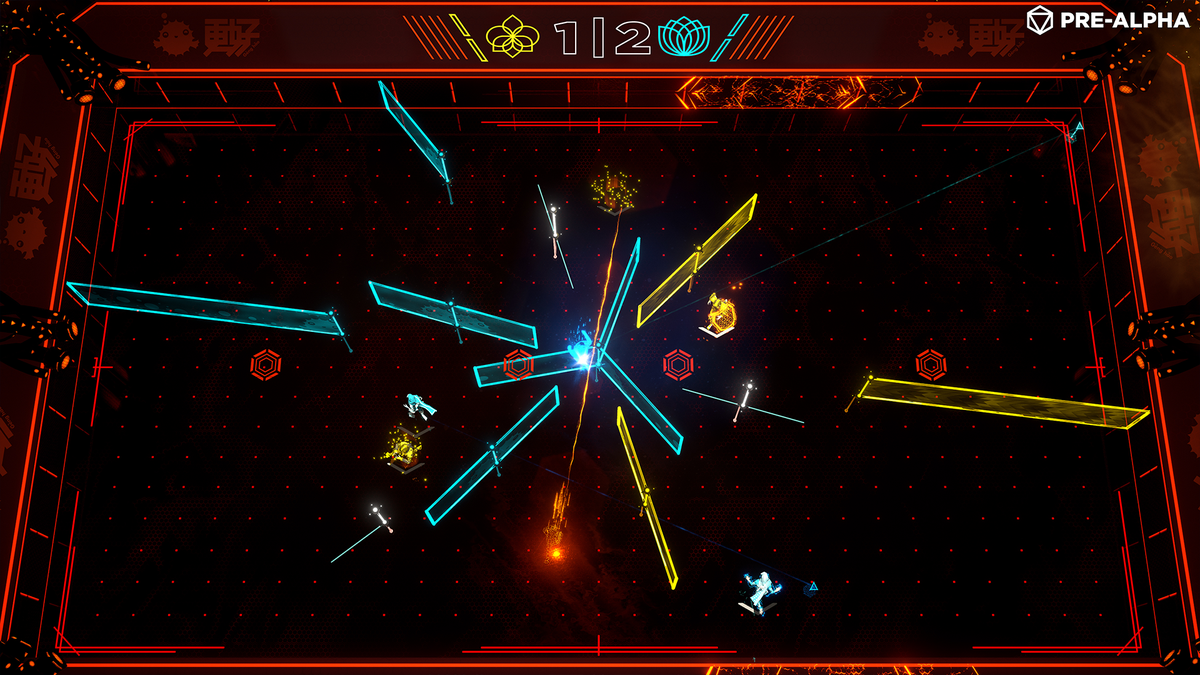 Each stadium we have is this super futuristic 2050 stadium from around the world, the one we were playing in today was the Chinese stadium. Within that stadium we have some very aggressive laser maps, each stadium has their own set of laser maps. They make you use your classes a bit and assembled some more random looking maps. The depth of the gameplay comes from understanding the spawn pattern of the map and knowing what power ups to collect and not collect.

Basically its a combination of knowing your class, your teammates’ class, and the environment and how to manipulate it.

Absolutely, all these things come together. We’ve found that when people stop their focus on staying alive and running around the screen they get better at the game. They start to play like okay, there is a Blade at that portion of the screen. I need to stay at least X spaces away from him and when you get even better you become aware that over there is a power up I want to collect. When you get even better you have full peripheral vision and a memory for the future so you know exactly where a power up will spawn and exactly what it does and can be in the right place at the right time to turn this game around.

It seems like the tactical aspect is really basic in regards to what combos work well and how to avoid the opponents and the lasers but the difficulty come in because everything is happening so quickly and your focus has to be divided on all these factors at once so it’s difficult due to having to multitask all these things in a high stress environment.

It’s hardcore stress. We’re saying if you aren’t a hardcore gamer you can’t just pick it up and enjoy it. It can be fun to pick up if you have a bunch your mates around but there’s a lot of buttons and it’s all about your twitch reactions to make split second snap decisions. For the more hardcore gamers this game knows no bounds. You have no idea how good people can get at this game. We’ve been playing with pro gamers and they are literally wiping the floor with us already and getting to a level of understanding and tactics that we weren’t even aware could be done. So imagine a whole team of players like that who understand all the different character classes and how to use them together with extremely quick reflexes. You’ll develop a really hardcore strategy and go into the round and the opposition will be like they’re doing X, Y, and Z and maybe we should switch it up. And then it becomes this war where the teams try to think of new ways to conquer each other’s strategies and that’s where the fun is, challenging each other. 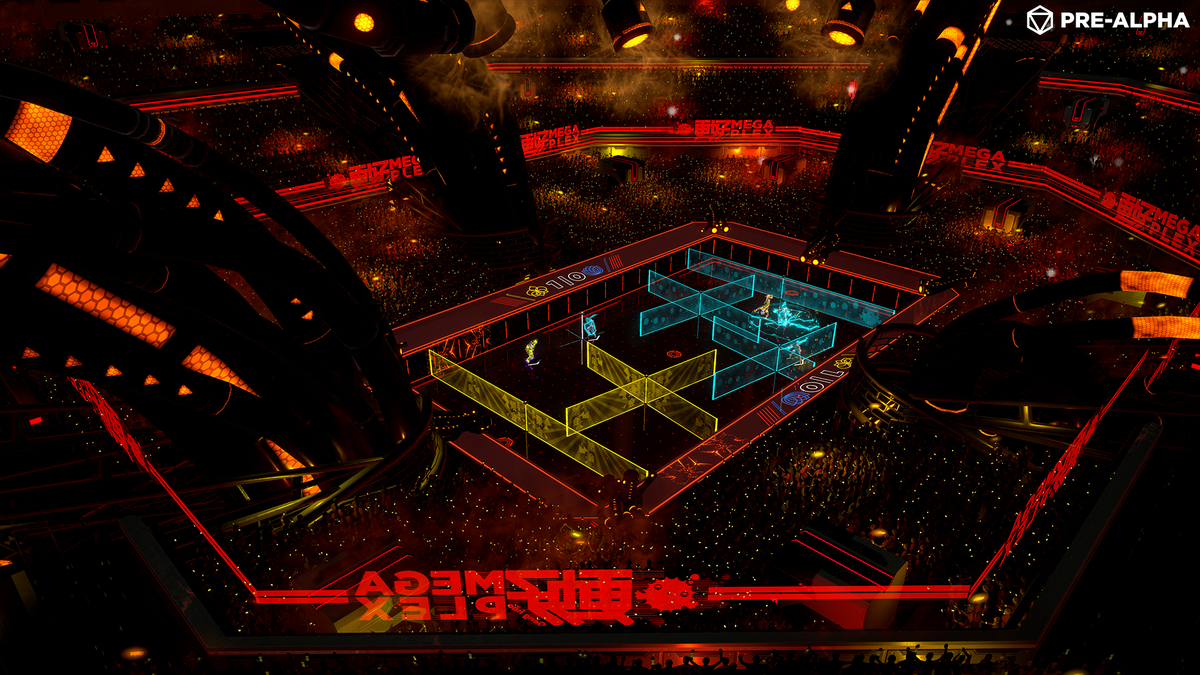 On Early Access launch in summer there with ten maps in three stadiums so four in one and three in two. There might be more but at this state we’re saying ten. We will be developing more in Early Access and see what the crowd really likes. The limits of how the lasers could end up working in the game know no bounds so we can make absolutely anything. War Zone is a perfect example of a simple mechanic, where the lasers could have just been straight lines but we are still finding new patterns with them.

It does have an ’80s action arcade vibe to it but with modern technology.

We did grow up in the ’80s and played games throughout that decade and also took some influence from the early ’90s and N64 with Golden Eye and the local multiplayer. Those were games you could just bring your mates around and you know you could set up a game really quickly and have a good time together. In a way with some newer games I feel that we’ve lost that. You can’t bring your friends over to play all those games because they’re too complicated.

I love that it supports same screen local co op. So many games now are either split screen or online multiplayer only, and some of these are games that I enjoyed immensely but thought that missing that couch co op component detracted from it. Online gaming does have its purpose and works well with my friends that live far away but everyone needs their own console and game and some of them are not that user friendly in regards to getting in a match with your friend. There’s nothing like just sitting down with some friends and playing together in the same room.

What I really like about this is the arena supports 4v4 and it will be 4v4 local, so it could be eight friends playing together. Maybe there’s seven of you so we throw a bot in to balance it. But we will be covering 4v4. The game is perfect at 3v3 and can be played 2v2 or even 1v1, though 1v1 is kind of weird for this game but you can still play 1v1.

After you get Laser League out on Steam are there any plans for a console release?

Right now we are 100 percent focused on the Steam release but the game will be coming to consoles, it is confirmed it will be on PS4 and Xbox One. Timing for those, no idea currently. We’re inventing a new sport and do you know how long it takes to invent a sport? For basketball to come up with a three point rule took 88 years. So we are quickly coming up with a playbook for a sport that never existed and we are trying to refine it with as many athletes as we can, and when we are happy with it after we feel we’ve gotten enough feedback and revised it enough it will launch. 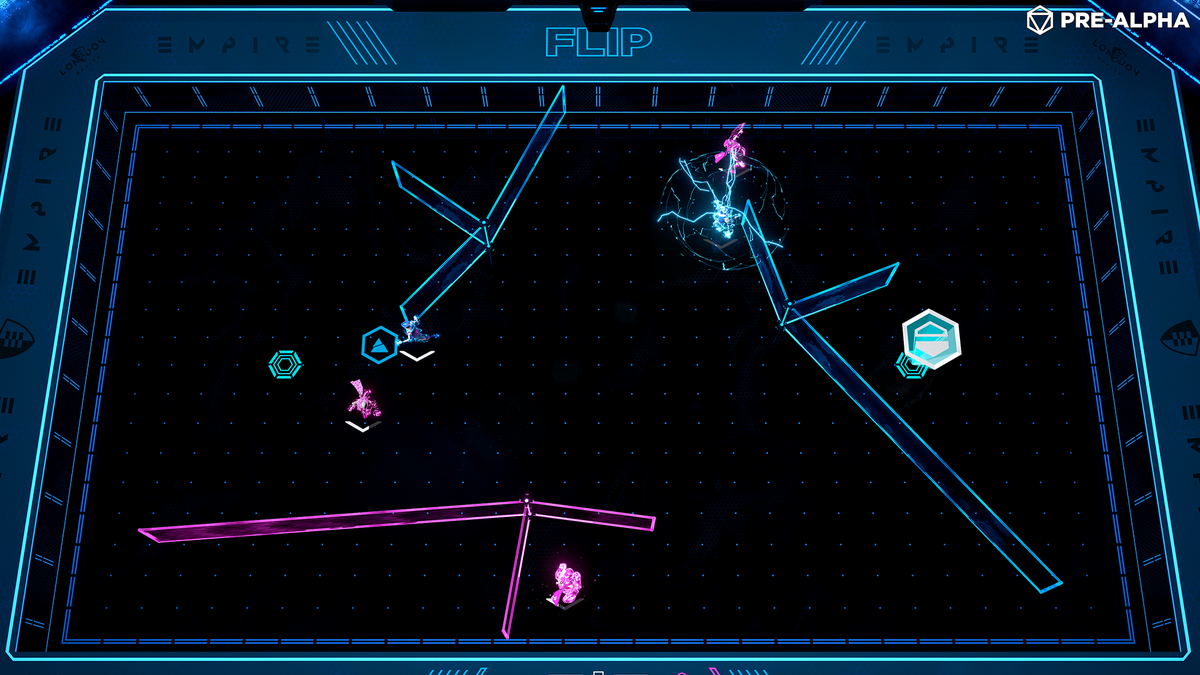 What can you tell me about how you came up with the idea for Laser League?

I will tell you about the lore of Laser League. This was a prototype with Ultra Neon Tactics that we came out with in 2013. Some of us were stuck on a train coming in from London and were playing around with this really simple line and dots on a screen. And they came back and said we’ve got this thing that might be really cool and we were working on OlliOlli and they starting showing this to people at London Indy and took it to E3. We didn’t show it on the floor, this was all behind closed doors just to other devs but we started getting good feedback on it so in 2015 we showed this game to journalists under embargo when we were working on OlliOlli 2 and people were like you should just make this game and we were like what? No no no just work on this laser game and we were like sure but it was a bit of a kick in the teeth since we had been working on OlliOlli 2 and we thought well when we finish that maybe we should work on this game but instead of being lines and dots on a screen let’s do something bigger. We’ve seen independent studios doing much bigger things so we scaled up from four to twenty in seven or eight months. I’ve been the de facto recruiter and we’ve built this studio and it’s really exciting to go from retro games like OlliOlli to something like this.

It does reinforce the old adage that sometimes the simple things are the best. It seems like an ideal game to play when you have some friends over.

It’s a perfect game for when you have some mates and just have some banter between them. Like full on shouting at them and goading them.

Yes, there are plenty of swear words I could use but you know exactly what I’m talking about.