The idea that the surface of Earth will one day become uninhabitable is not anything new. There seem to be a couple diverging schools of thought on the topic for what our plan B should be. The more common idea that is explored is that we accept that the damage we’ve done to this planet is beyond repair and sheepishly blast off into outer space and set up shop on new planets and try not to destroy them like we did one (who are kidding, we know how we are) and just kind of tacitly agree not to bring up Earth in conversation when we start to get visitors by alien races on our new planetary homes. The other less explored but equally interesting alternative is to remain loyal to this planet, abandon surface dwelling life and colonize the oceans. This brings us under the sea to the aquatic battleground where Aquanox: Deep Descent takes place.

Aquanox: Deep Descent is a re-imagining of the classic Aquanox series. The remnants of humankind have abandoned the surface of Earth and now live in research and mining facilities under water. Despite living in neighborhoods populated by fish, human nature itself has not changed in spite of the change of residence. As resources on the surface were depleted, they now must be gathered from the depths of the ocean, and just like on land the desire for dominance over the limited resources has inevitably led to war. 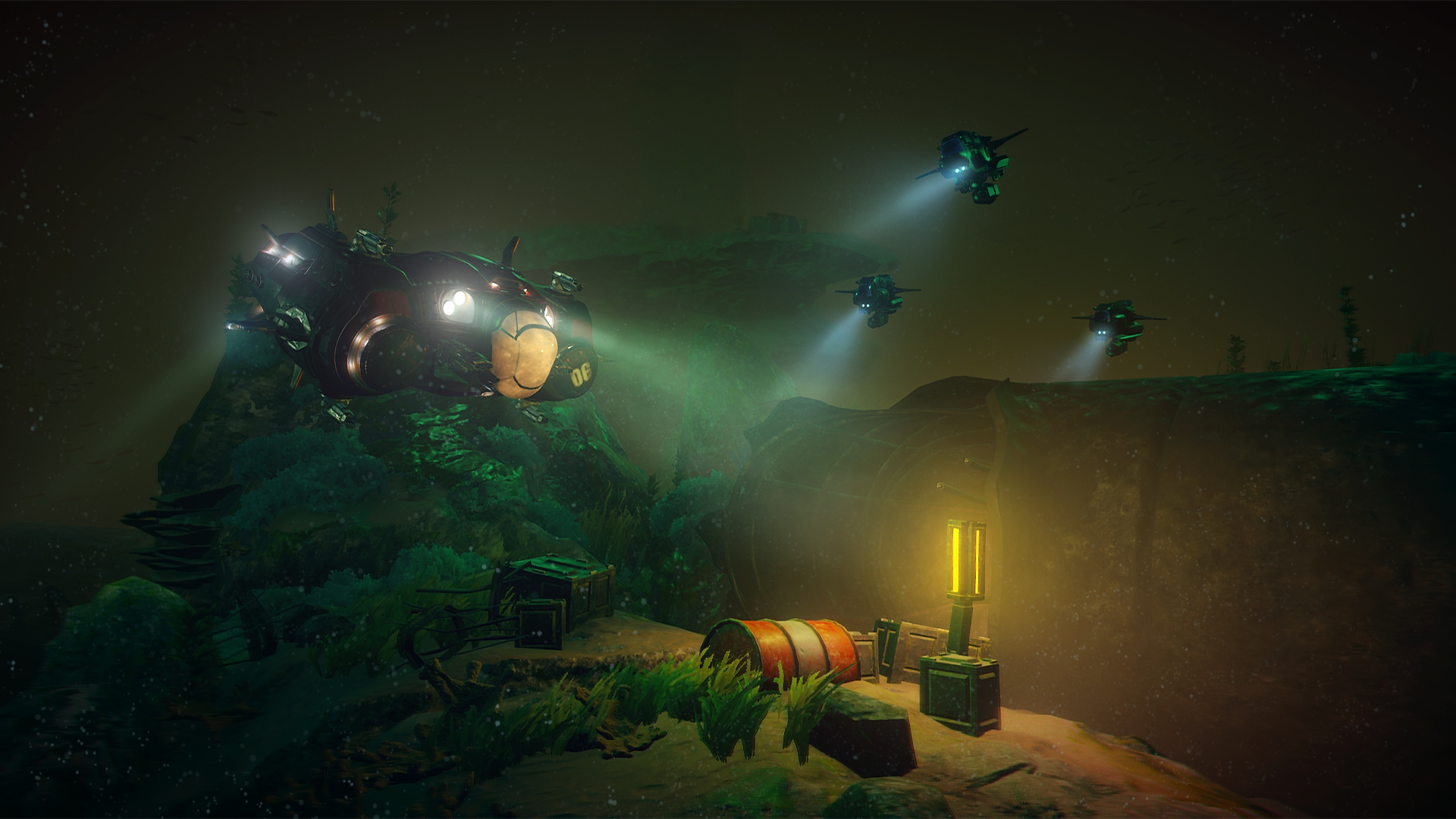 This may sound like a dystopian nightmare, which if we were being asked to actually live in this world it most likely would be but if the Fallout series has taught us anything it’s that the most undesirable living conditions make for enjoyable games. Aquanox: Deep Descent is a first person shooter, but due to the nature of the environment this is a shooter that involves dogfights in various submersible vehicles. Being underwater does put a unique feel on the controls and battle mechanics compared to shooters that take place on land or involve air combat, but once we get our sea legs acclimated the general concept is familiar territory. There are a variety of ships that cater to different combat styles, from quick moving scouts to more lumbering behemoths. Weaponry ranges from long range accurate shots to standard torpedoes to basic rail guns.

The story of Aquanox: Deep Descent does not directly tie into the original games but naturally elements of its new story were derived from the original games. The world found in Aquanox: Deep Descent is a complex world with different societies competing for a limited pool of resources, with a different political and economic factors at odds against each other, making the basic distinction of good or evil not applicable. The narrative is also driven by characters personal problems and other issues, illustrating that in even the most hostile scenarios and environments we are all still human. 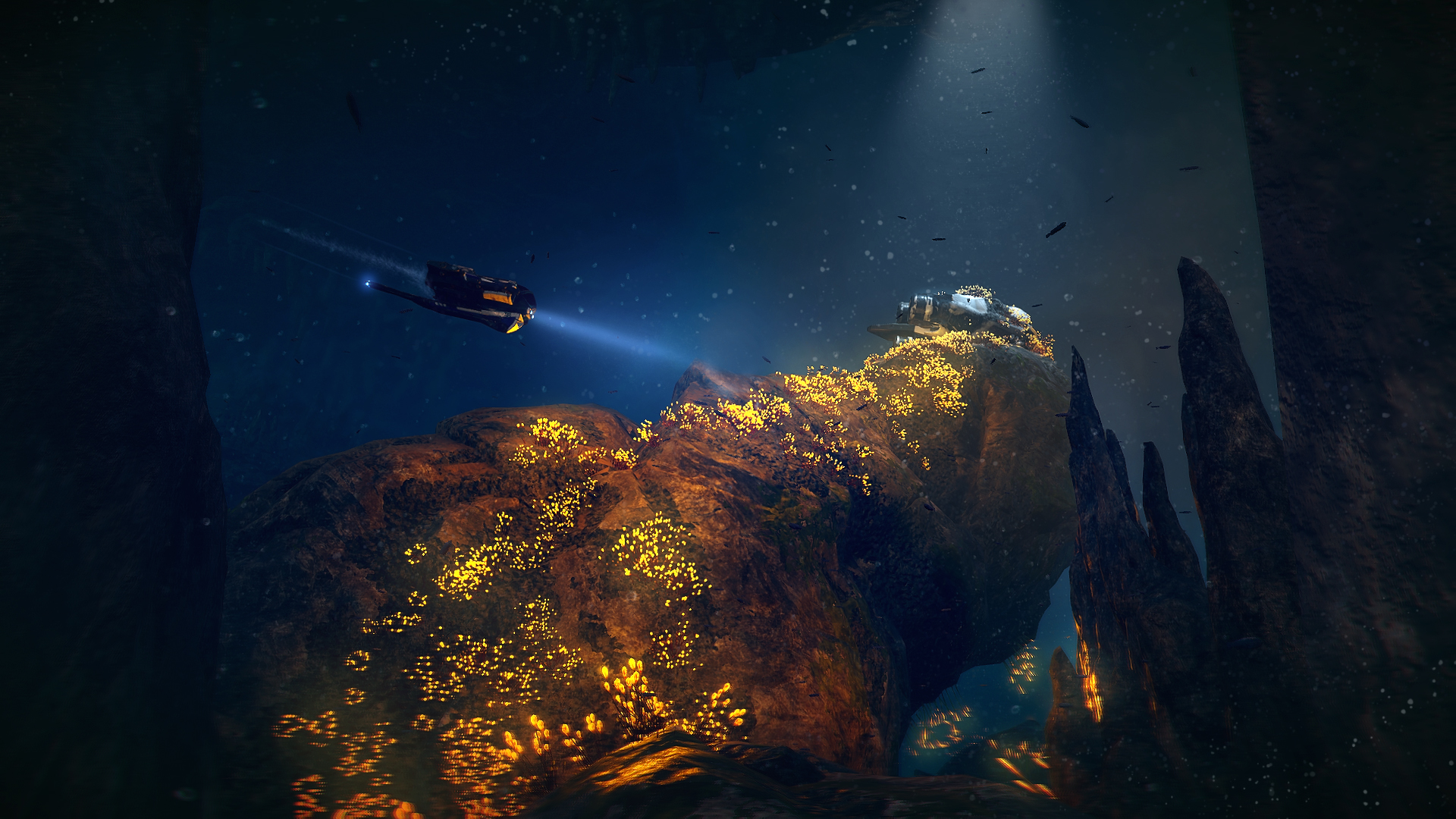 Aquanox: Deep Descent has players exploring the deep trenches of the ocean, mining and salvaging whatever they can find, giving it some nice looter appeal. These items can be traded with other players, as multiplayer is supported so everyone can show up their custom made ships. Up to four players can play cooperatively, each with a distinct player that related to the story. No first person shooter would be complete with some competitive multiplayer, and Aquanox: Deep Descent will at minimum include class Deathmatch and Team Deathmatch Dogfighting for a proper PVP fix.