We first caught wind of Milanoir when the crime-flick inspired game landed on Steam Greenlight. It looked darn promising, and it appears that judging a book by its cover turned out to provide a pretty accurate assessment. In fact, actually playing the game reveals it to be tremendously exciting – more so than any trailer or screenshot could accurately convey. This is thanks to the smart melding of twin-stick shooter controls mixed in with a wide variety of gameplay segments.

Gameplay alternates often, ensuring that players never have a dull moment. For example, the first level of Milanoir begins with a bit of stealth. Players must make their way up the outside of a 2D brothel in stealthy fashion. Hiding behind boxes and waiting for enemies to turn around is key to getting through this portion. After finding your target, gameplay switches to more traditional top down twin stick shooter action. Some enemies fight back with bullets while others lob grenades or even simply run at you with a knife. 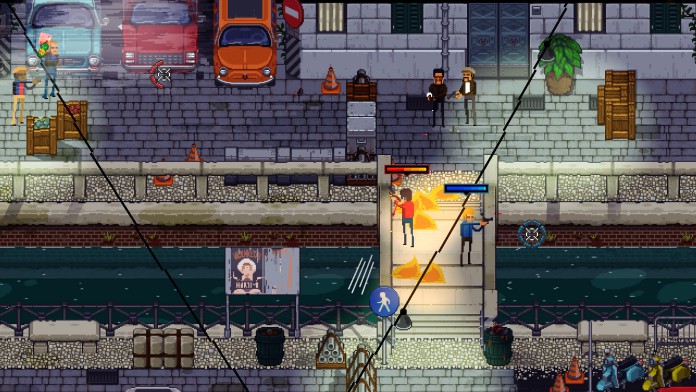 The twin-stick shooter play is core to the experience. Not only must you fight against enemies directly in front of and behind you but also folks perched on nearby buildings. Keeping an eye on both areas is imperative to keep from getting shot up by a far off menace. Rolling, hiding behind objects and shooting at the right time is required if you hope to stay alive. Then it’s time for a boss battle. While still offering the arcade-style gameplay, the first boss fight also offers a bit of a puzzle and skill-based challenge. Finally – after this first boss fight – you enter into a 2D chase sequence with cars ramming into you!

Milanoir simply never slows its pace. It also offers up a seriously difficult experience. Fortunately, you’re not forced to go it alone against this challenging gameplay. There’s also a multiplayer option to turn this one-man-army crime drama into a buddy cop entanglement. All of this is complemented with stylish pixel art that looks like what you might expect if Quentin Tarantino designed his own video game. The funky, fast-paced music also meshes perfectly with the Milan setting and violent action. 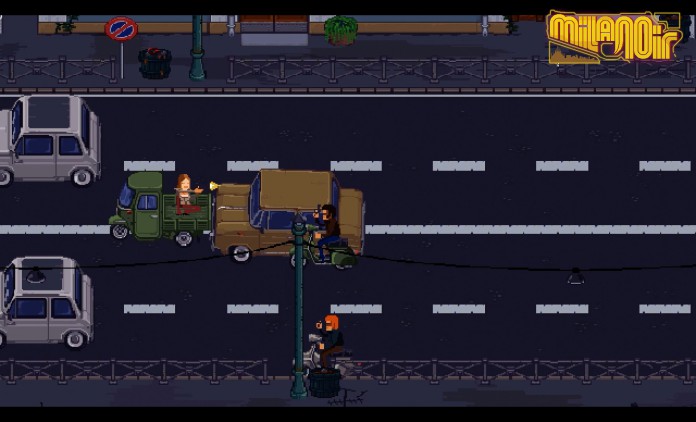 Sure, there are all manner of crime-related video games out there, but few ever really feel like a gritty crime flick from a bygone era. Fans of Italian crime films such as Caliber 9 will almost certainly feel their influence on Milanoir. The consistently action-packed gameplay also ensures that a single player or local multiplayer duo are in for quite a trip as they play through each chapter of the game.

If you feel the desperate urge to pick up Milanoir right now then you’re not alone. As of now, developer Italo Games have targeted a release window of Q2 2017 (meaning it should be out quite soon). So far it has only been announced for PC release via Steam, but it plays darn well with a controller. We’re hopeful for a console release as PS4, Xbox One and even Switch owners deserve a taste of Milanoir.