An exceedingly common theme in the VR market is shooting. Zombies, aliens, robots and amorphous shapes have passed through the crosshairs of this virtual reality fan in numbers that simply cannot be quantified. Usually, this involves staying stationary as everything comes running to the player, begging for attention like an annoying, and suicidal, pet. If the player is lucky, the game shuffles the hero around via conveyor belt, elevator, on the back of a flightless bird or something else so that the scenery changes. While this was fine in the early days of the technology, it’s gotten old. The situation has become a catch 22. Potential customers hold off because the games aren’t interesting, but the games aren’t interesting because customers are holding back. This is where developers like Drifter Entertainment come in, looking to disrupt the cycle. With Gunheart, Drifter is seeking to create a shooter with depth and teeth.

As a concept, the plot is simple. The players are robotic bounty hunters that specialize in murdering alien bug people that may or may not be sentient. Who knows, and who cares? The alien’s skin is chitin, and they are making life difficult for humanity. If Starship Troopers has taught us anything, it’s that the only good bug is a dead bug (it also taught us that co-ed showers are really cool, but that doesn’t fit the context here). So, bounties are taken and bugs are obliterated. 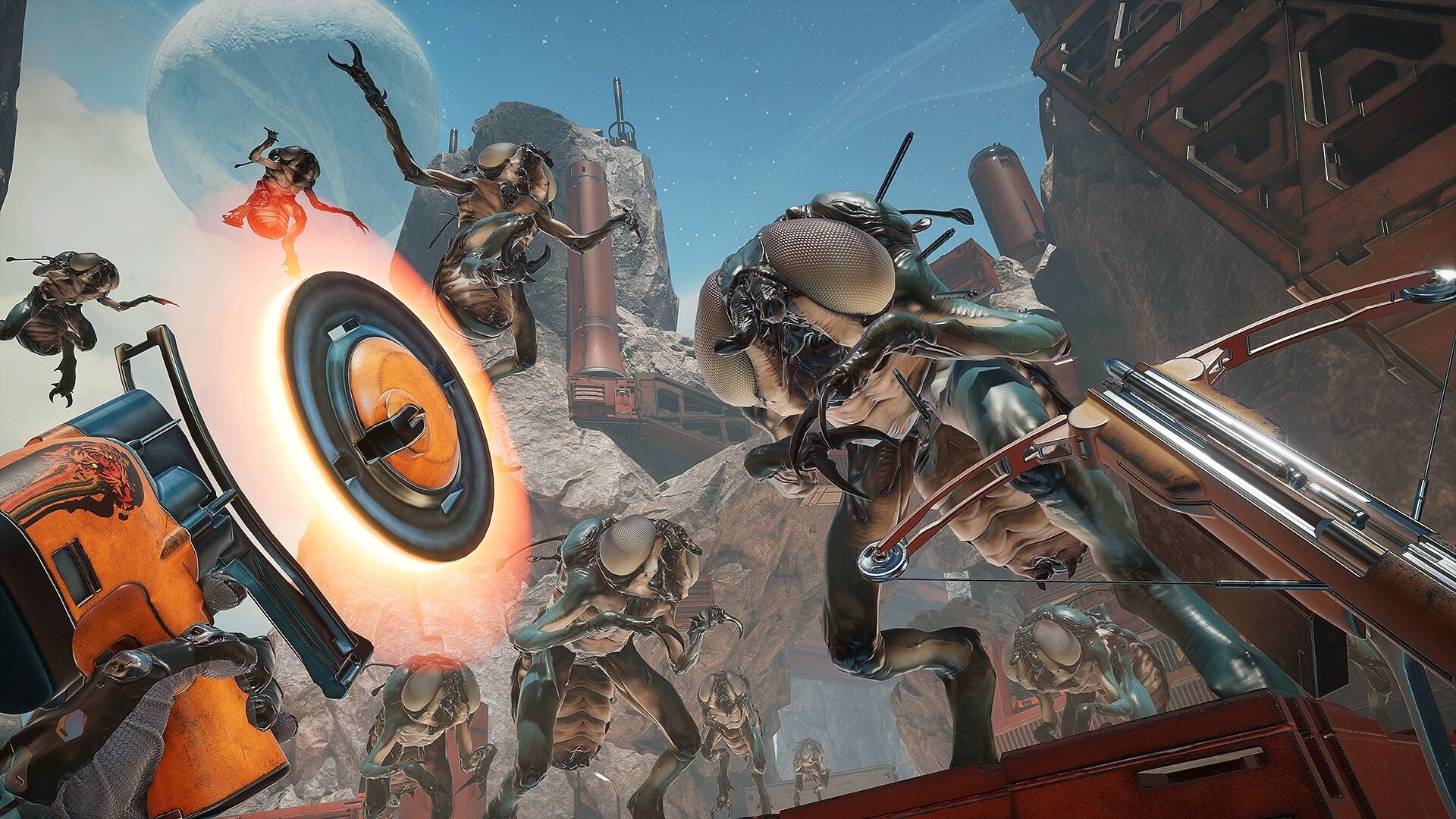 During my demo, my character came equipped with a different weapon in each hand. In my right was a repeating crossbow that doesn’t require reloading but has a slower rate of fire. During play, this was my long ranged weapon. In the left was a shotgun that held four shells. Once it the weapon was empty, the barrel hangs from a hinge, separate from the stock. Flicking the wrist up slams the barrel home, reloading the weapon.

These two are just a couple of various weapons that can be purchased and equipped with money earned during missions. Player abilities can also be purchased with this money. One such ability is the one we had ready: bringing both weapons together causes them to merge and become a bullet spewing minigun. Ammo is not a concern with this weapon, but it is slow to spin up and prone to overheating if the player isn’t careful. So far, the components are in place to make for a more interesting game than most VR titles. 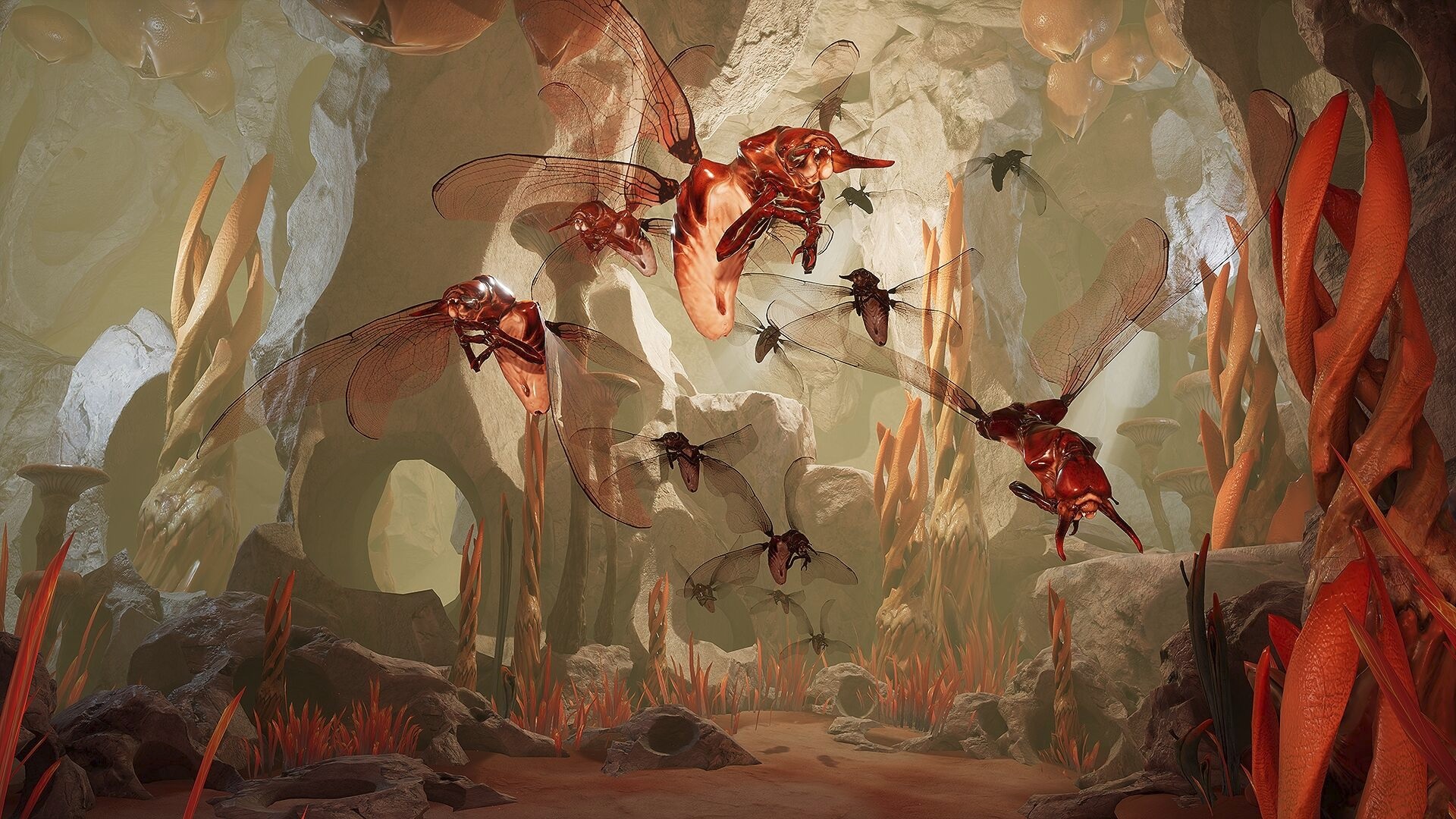 The level proper that we got to play was surprisingly fun. It was a mining camp that has been overrun and needs clearing. Using teleportation movement, a co-op partner and I explored the level, gunning down hordes of airborne flyers, small imp like creatures that charge the player, and human sized bipedal bugs with ranged weapons of their own. Using various items around the level, we created choke points to defend when overwhelmed, took the high ground for easy sniping, or just dove in for some face time with the bugs. The battles worked quite seamlessly.

One particular observation about this level: there are numerous bridge pieces unconnected to the rest of the structures. It doesn’t appear that there are plans to connect the paths due to their varying elevations, and the way some parts are turned from each other. This can only mean that Drifter Entertainment is predicting two things. First, OSHA, or a similar organization, will not be existent in the future, possibly because the world decided that there were too many people and this was a reasonable way to whittle down the population. This means that workman’s compensation also no longer exists. Secondly, the developer is also positing that people will become experts in parkour, trained from birth to navigate the hazards of everyday life. 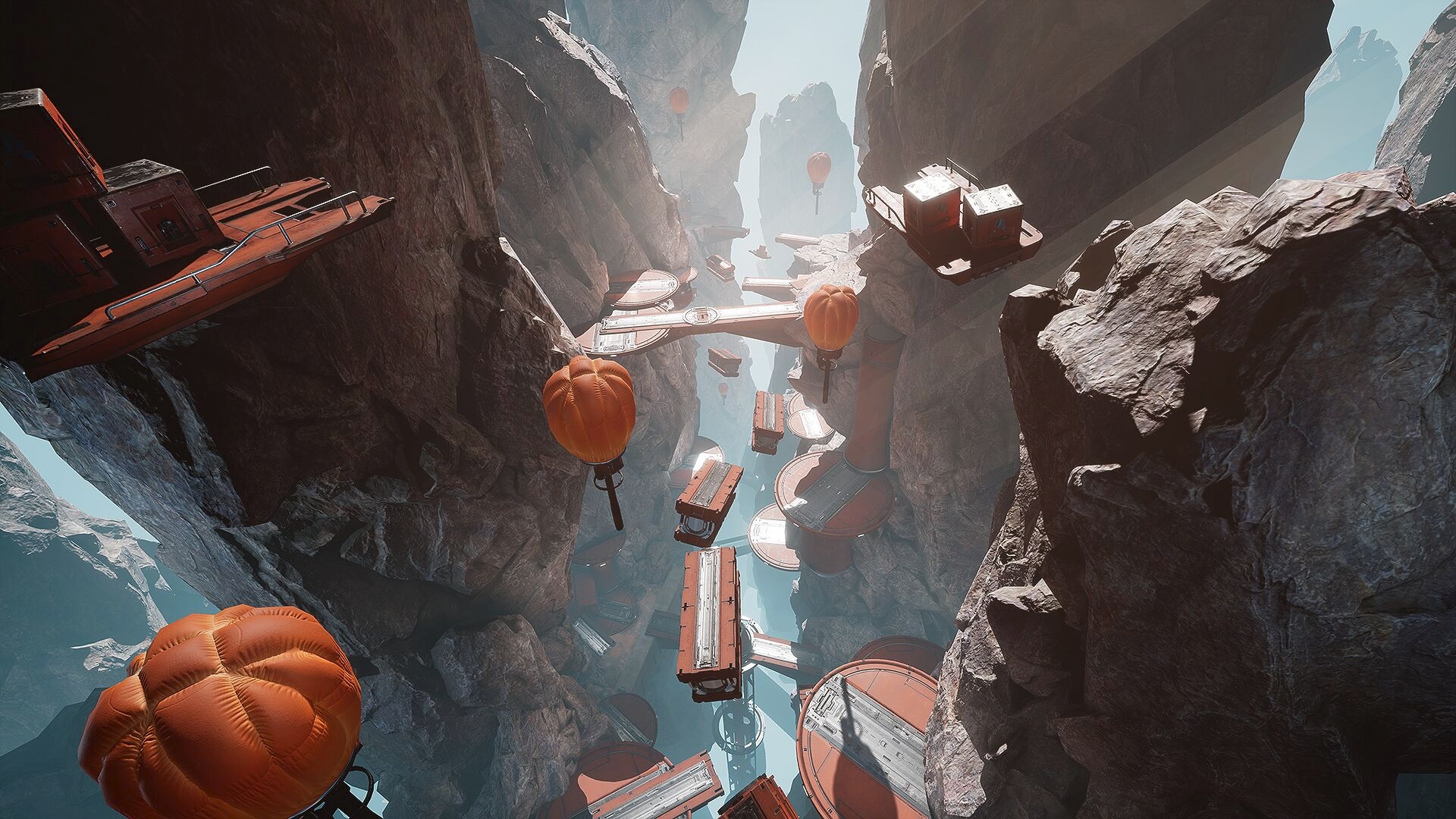 Having only played in one level, and goofed around in the pre-mission lounge area, I am happy to admit that I rather enjoyed Gunheart. Being able to customize the character with different abilities and weapons will allow players to do more of what they want, and having an actual stage to explore instead of be locked into a preplanned spot makes it feel like a more fleshed out experience. The only item on my wishlist would be to allow players the option to directly control movement, instead of teleporting. Blinking from spot to spot does work, but enough of us have our VR legs and are able to handle using a track pad to walk, back up and strafe, using room scale to turn. Beyond this request for an option, Gunheart should have the mandibles to keep me engaged for quite awhile when it launches.