E3 is a rather crazy time; running from appointment to appointment while generally just trying to take in as much as possible. This is well documented. One of the biggest treats, though, is to come across the people who make that games that you enjoy. This was an experience that I had when I, unexpectedly, got to interview Kenichiro Takaki, producer of the Senran Kagura series. Apparently, I was the only person who didn’t know this was going to happen (stupid e-mail box thought the appointment itinerary was spam…) So, under the haze of unpreparedness and more than a little hero worship, I chatted up the producer about what will probably be the funniest and most cringe-inducing games of the Summer.

[Kenchiro Takaki] So, here we have Senran Kagura Peach Beach Splash, the first time we’ve gone into shooters. As you know, it’s been action games in the past.

[Hardcore Gamer] Cool. Was there a particular reason you guys wanted to go this route? Did you just want to do something different? (Note: There was a bit more preamble than this prior to hitting record. I’m mentioning this because, otherwise, this would seem like a horrible rude way to start an interview.)

The action games are definitely going to continue. The main series is going to continue in the future. We did want to do something different. Also, because the Senran Kagura series is picking up more fans overseas, we wanted to try out a genre of game that is more popular worldwide to bring in even more fans.

There are some who would describe this game as exploitative, but I feel that this game is written and presented as the girls being in on the joke. Also, my wife, who is very feminist, could also argue the same. It feels like the ladies are presented in the same way as guys would be, palling around inappropriately. Is that intentional or am I projecting my own politics to make myself feel better?

Yeah, I think there is common ground there. The point of these games all along is it should be light, it should be fun. When portraying the girls in the game, we never really show them being damaged or really hurt. Not victimized. We take care to make sure to show them in a way that is enjoyable, entertaining and not something to feel bad about. 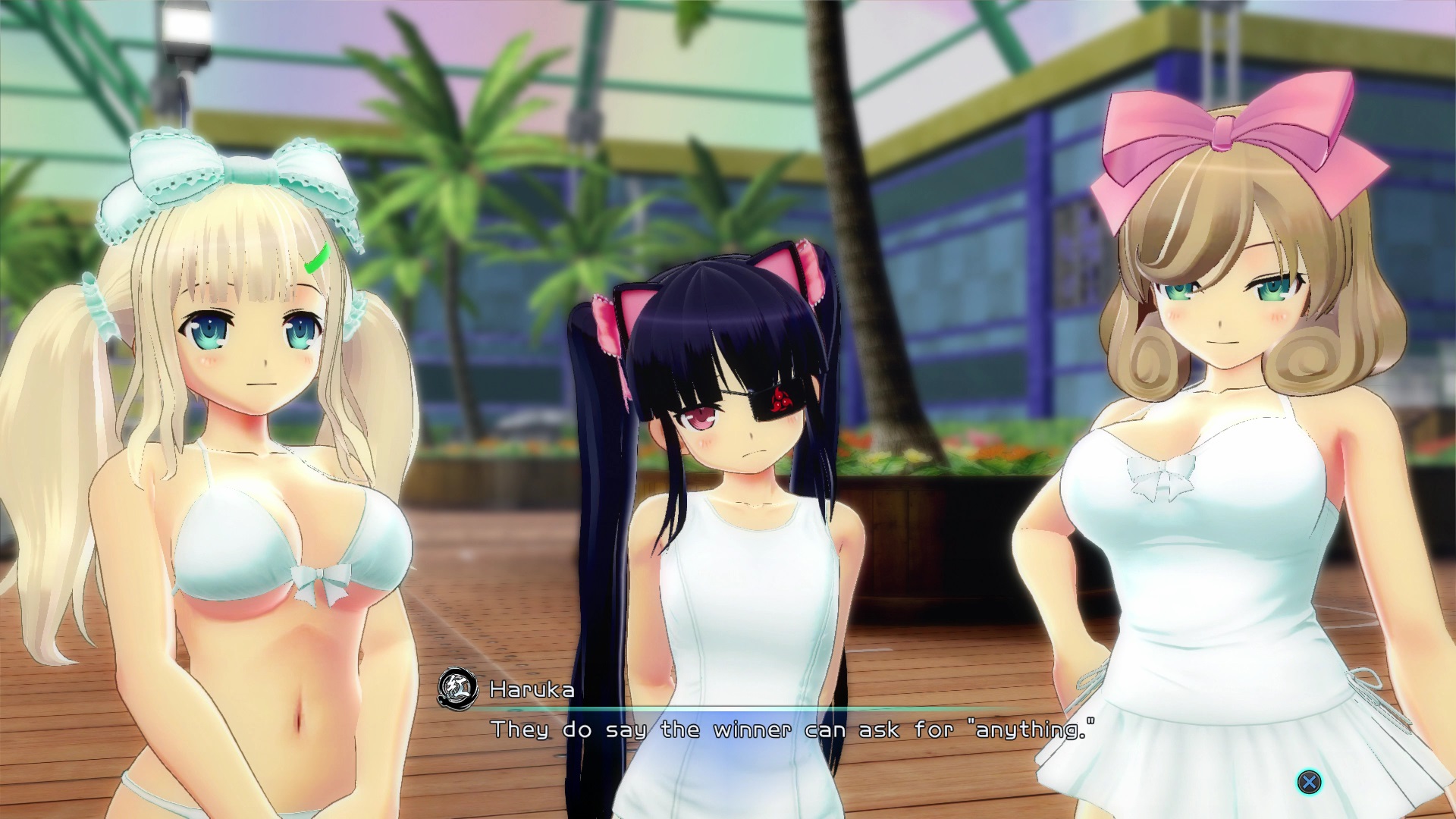 I did get to try out a mode that simulates multiplayer before coming in here. Is there also going to be a proper campaign, or are you going to focus on competitive play only this time?

We will have multiplayer as well as single player.

Will the single player be as story intensive as previous titles in the series?

Yes, it does have a story and it’s the same sort of set up as the other games. It’s a lighter story. Supposedly, these girls are on vacation…

Right. This time it’s more like a real vacation. It is a story that is in the canon progression of the overall series, but this is sort of like a lighter chapter.

One thing I really appreciated about previous games is that, while you included microtransactions, the player had to search for it; it wasn’t something advertised everywhere in the game. With the card system I’m seeing here, is that the same attitude that will be shown this time, or is there meant to be more of a microtransaction element?

Similar to the previous games, microtransactions are something that we don’t want the players to feel are necessary to play the game. The game is enjoyable to people who don’t want to spend any more money. It’s more to help some people get ahead faster, so they can buy card packs as DLC.

At this point, he loads up the game and starts to show me some features.

So the missions are 5v5. In the demo version, you aren’t allowed to change your cards, but the final version will be fully customizable with cards that can power you up. You can see here that these cards all have one star at the top. As you play the game, you might find the different cards with more stars, which are more powerful.

With the numbers at the bottom (of these cards), are you able to level them up? Do you feed cards to other cards, or is this for something else?

Yes, each card levels. When leveling, it won’t get more stars, it will just be stronger than before. 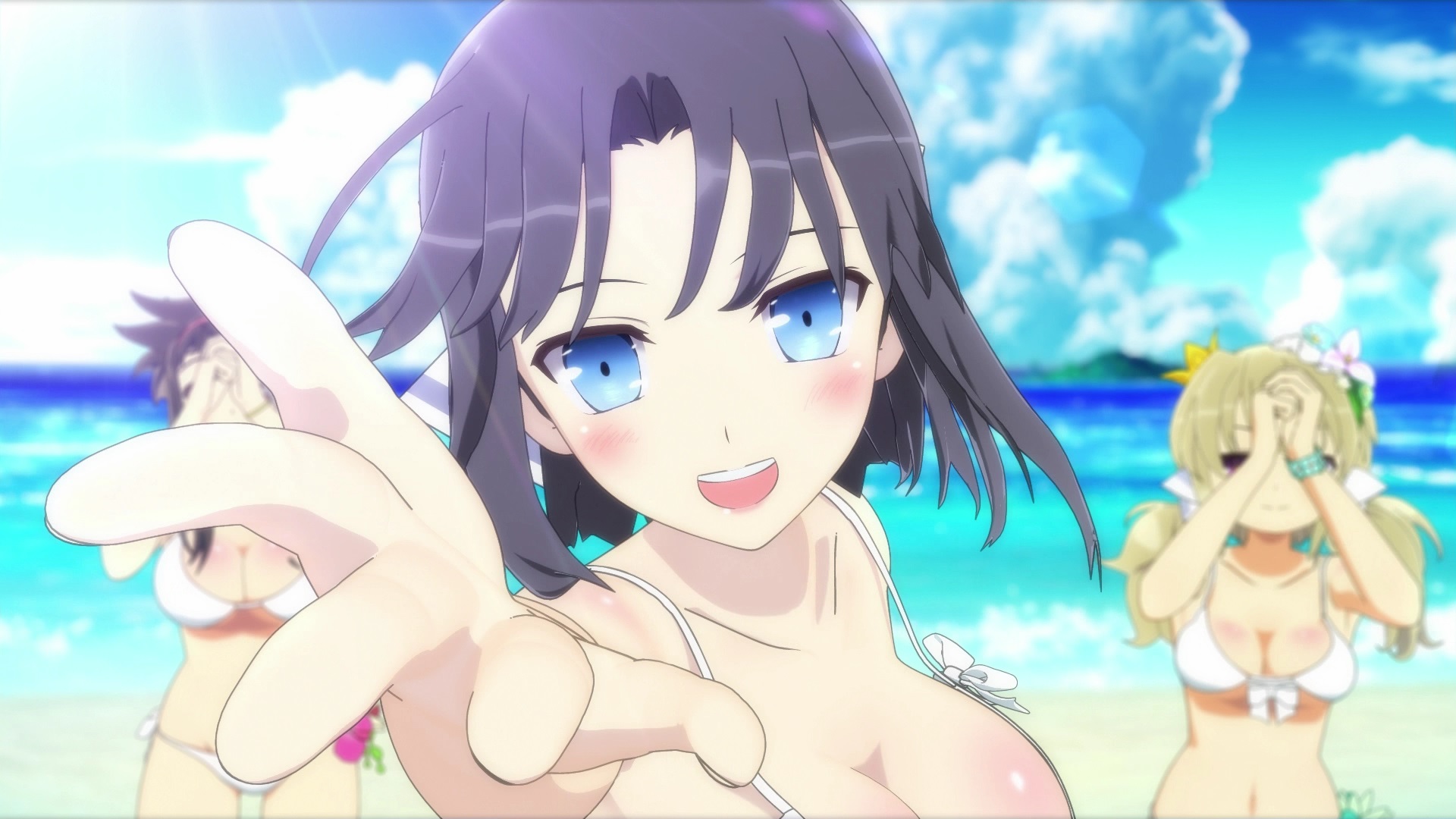 He starts a match.

So this uses classic third person shooter controls. ‘X’ is jump. Square reloads. You don’t have to be in water to reload. The same water gauge is both ammunition and fuel for the jetpack. It’s a pretty easy to understand game. You run around shooting other characters to get them wet and knock them down. As you shoot the enemy characters, your cards start to glow. When you reach a certain level, you can use your card skills. The skills the cards have might be homing shots or spread. Oh, here. After you knock them down, you get a chance to splash them to take them down. You can choose to shoot them in the chest, the lower body, or in their face. This helps power up the cards faster.

He demonstrates, and an enemy’s top flies off. She blushes as her cloud covered chest is exposed.

You can also change the color of the water that you shoot at them.

The goal here was to make a third person shooter that beginners can enjoy, that people new to the genre can enjoy. One of the things done to achieve that is friendly fire in this game, if you shoot one of your own teammates, it has a positive effect. When you shoot an enemy, it damages them. When you shoot a teammate, it makes them wet. When they are fully wet, they become more powerful. 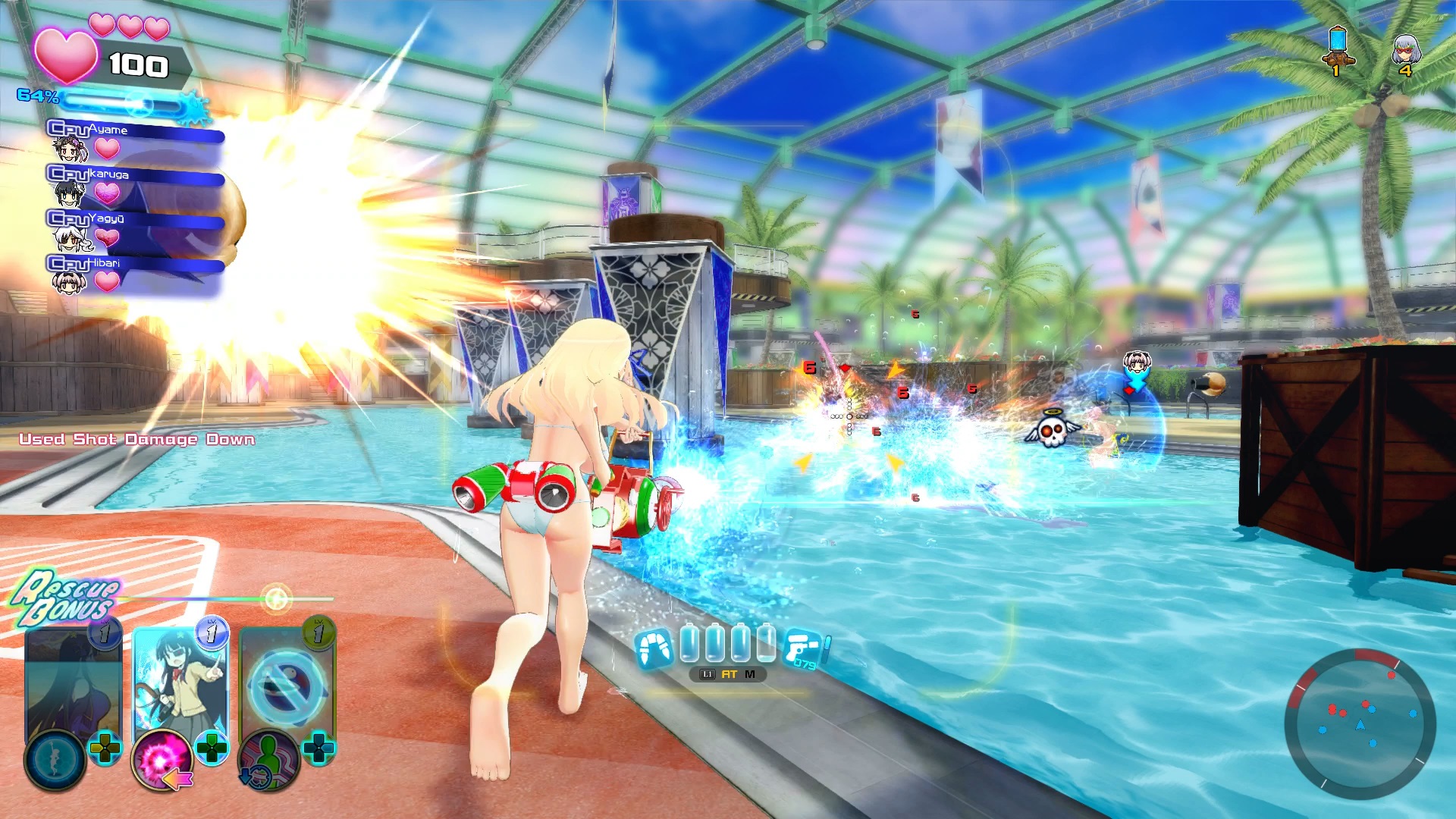 Even if you are not good at getting the other team, you can still contribute. Cool.

When you finish a mission, you get a card pack and you get new cards.

What happens if you get doubles?

You can exchange your doubles for items that you can use to power up your cards. They can be exchanged for points that are then applied to other cards. The two main single player modes are the story mode and a mission mode. For multiplayer, we have a competitive mode and a co-operative multiplayer mode. Also, it’s not in the demo that we are showing today, but it will have the Dressing Room that we had in previous games and will have the same amount of customization.

For multiplayer, is it ranked and unranked? If there is ranked, are outfits limited?

The ranked match doesn’t have any kind of restrictions on outfits or cards. The game’s already out in Japan and we’ve released a few patches, so far, to help with the balance so that there isn’t one particular combination that’s way too powerful. 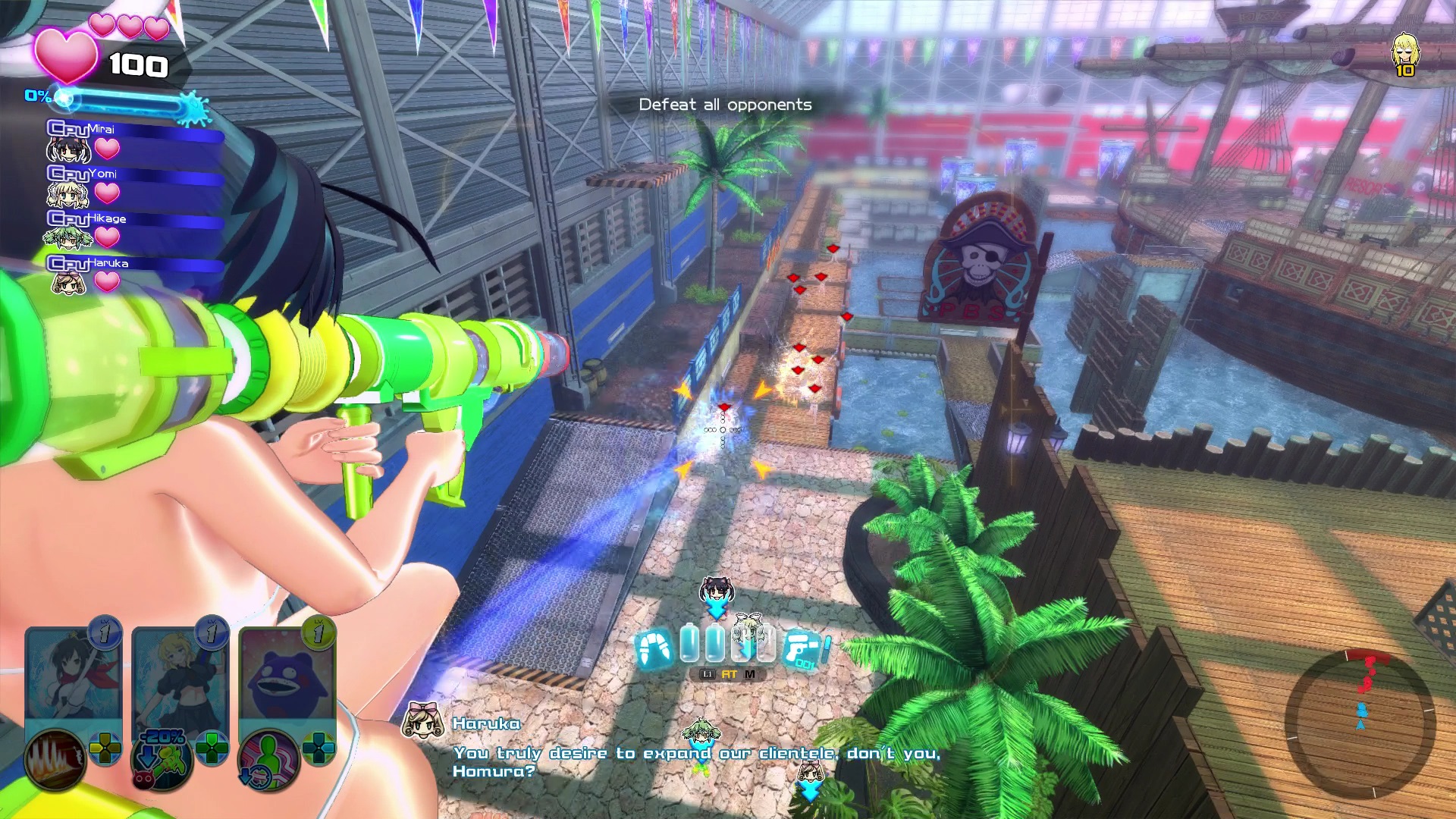 We’ve covered story mode and competitive, but how many different types of weapons will be in the game?

Eight primary weapons with the cards seems like a good variety, because not only are you customizing yourself, but you need to be able to prepare for what other people might have.

That is the same thought we have with the characters. The characters themselves don’t have any different abilities, so you can play as your favorite character without feeling handicapped.

I’m very excited to get my hands on the full version and watch my wife cover her face in embarrassment. I do have an off topic question. I notice that you guys continue to support PS Vita, and I personally love that, even though your games are probably not the most appropriate things to play when I’m at the laundromat or whatever. Is it because you really like the platform; is it doing better in Asia?

I really like the Vita as a platform, as do our other producers. It’s something that we like supporting. This particular game will only be on PS4 because of online multiplayer. We wouldn’t be able to have as many players at the same time.

Thank you for your time. Before I am forced to leave, is there anything you would like to add?

I really wish this version had the Dressing Room, because there are some things I’d like to show off there. But, I really want players to just have fun with this either in matches or taking a break between them.