With so many RPGs focusing on heroes out saving the world, it’s nice to step back and take a different perspective. Moonlighter is a game where players assume the role of a small business owner, mainly, a shopkeeper in Rynoka. This little village is right next to an excavation site which recently went under a surprising transformation. A passageway into different realms was uncovered which means that copious adventures are now piling into town as they head out on their latest adventure. Here’s hoping our aspiring shopkeeper can keep up with all this booming business.

Initially, it may sound similar to Recettear: An Item’s Shop Tale. While they both feature the similar setup of a shopkeeper providing wares to warriors, the gameplay is fortunately quite different. In Moonlighter, you’ll be spending a lot of time exploring these randomly generated dungeons on your own. Fighting off enemies isn’t exactly easy for a shopkeeper, but it’s necessary. Defeating baddies yields items and components which can then be crafted or sold as is in your shop. 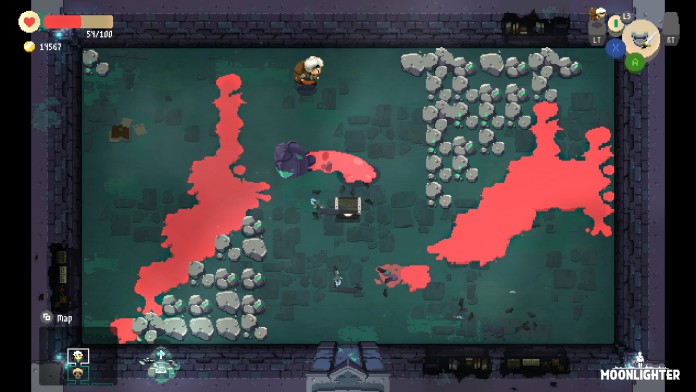 The dungeon gameplay feels very much like a solid rogue-lite rather than a minigame. Its top down action gameplay is fast – and often quite challenging. You’ll need to know when to strike, roll away to doge an attack or simply bail out entirely. After all, if you end up dying in the dungeon then all that great loot just collected goes to waste. Unless you throw out a portal there will not be a way to return to that specific dungeon again later, either. The push and pull between knowing when to leave or when to keep going forward is enjoyably challenging.

After finishing a successful dungeon run, it’s time to go ahead and enter the shopkeeping portion of Moonlighter. Simply placing items on the store shelves isn’t quite enough. Players must select the price themselves, even though they won’t know what something is worth initially. Learning about how to price objects comes from watching customers peruse the shop. If they react positively then you know that’s a cheap price compared to what they expected. On the other hand, an angry face reveals that you’re charging way too much for something. All these pricing points are logged for later reference. 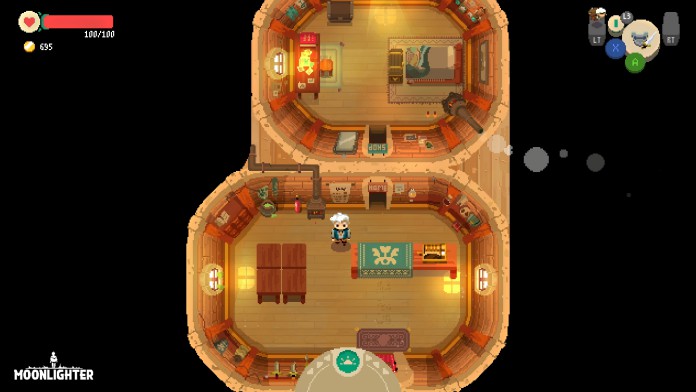 Sometimes you’ll also need to interact with the rest of the townsfolk as well. Since Rynoka is a trading village, it’s full of NPCs ready to aid you with crafting and more. Crafting yields new and better weapons and armor. Heck, it’s also possible to enchant items if needed. Sometimes adventurers will ask you for specific things. Provide them to receive quite the bounty for these efforts. After gaining enough money from selling goods, you’ll be able to upgrade the shop further.

Both elements of Moonlighter appear fleshed out enough that they could work as their own separate titles. Of course, they are designed to work best together. Exploring dungeons and then selling off your collected loot to customers is a great gameplay loop which we’re excited to try more of. Expect to see Moonlighter come to PC (Windows, Mac and Linux), PS4 and Xbox One later this year.