The Fire Pro series has been known for offering some of the best in-game editing tools of any game on the market – wrestling or not. The new Fire Pro Wrestling World development blog doesn’t just celebrate the upcoming game, but also brings with it new information on the editing suite. The most recent entry in the series was Returns on the PS2, which allowed for minor angling of character models via poses – but didn’t let you move everyone around. Now, you can preview the wrestler from the front and back and do a 360 degree turn on all of the parts. Each wrestler can also have four outfits now – so the days of having a dozen different slots filled up for one roster member are gone. 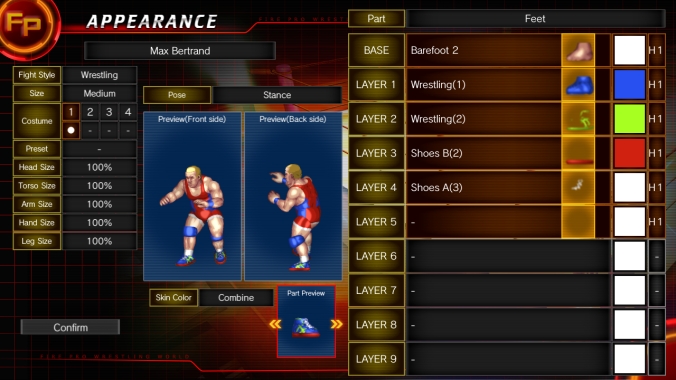 The layering system has also been changed to go far beyond the already-exhaustive three. Nine layers are allowed, with each layer’s color being modifiable far easier than before. It was a trial and error affair before, but a new RGB color picker allows you to pick detailed pre-sets and also copy and paste colors over. With this coming to PC, it will also use the Steam Workshop and allow you to both upload and download items from within the Edit Mode’s menu – so you never have to exit the game to do anything. This is an incredibly user-friendly way to go about things, and the PC should be a natural fit for a franchise that has relied on user creations for so long. Fire Pro Wrestling World launches via Early Access on PC on July 10 for a mere $19.99 and should be the best use of $20 a wrestling fan can spend this side of a New Japan World and WWE Network subscription.