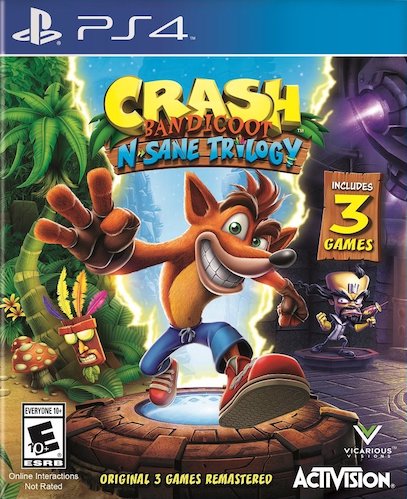 A series’ legacy — and as such, its admiration by fans far and wide — can be best deduced by how little it takes to send folks into a frenzy of surprise and utter delight. Nintendo only recently proved the less = more approach works, by having a great big ‘4’ show up at this year’s E3, accompanied by a particularly recognizable musical sample. Sony though had already beaten their long-standing rivals to such a delivery during last year’s event — offering but a mere moving shadow of a specific mascot alongside its series’ main theme to proudly announce that [*cue drowning-out of cheers from the crowd*] Crash Bandicoot was coming back in the form of the N. Sane Trilogy. A three-game, current-gen remaster of, arguably, one of PlayStation’s finest assemble of titles — a notable example, early on in the console’s life-cycle, that Sony could indeed stand as the third pillar to both Nintendo & Sega’s previously-shared dominance in providing exclusive titles that were as much entertaining in their delivery, as they were enjoyable with their substance.

The original Crash Bandicoot may have stood as David to Super Mario 64‘s Goliath at the time of release and while Nintendo’s own mascot would go on to revolutionize the platforming genre with its ground-breaking 3D design and sandbox style of gameplay, Crash — alongside fellow Sony big-hitters like Spyro the Dragon — was by no means crushed by Nintendo’s established base. If anything, it was Naughty Dog’s very own marsupial that proved on equal footing that the genre did not belong to but one mere plumber. That platforming, in this case the more restrictive and linear approach, could still pose a notable challenge. Introducing subtle elements and major visual overhauls alike, not to mention a lively sense of character to add to its grand palette.

While the N. Sane Trilogy, in all its “from the ground-up” slew of visual enhancements and reworked animations, certainly can’t hide the aged backbone of its progenitor from a purely structural stand-point, the flip-side to a trilogy of this calibre — and of this admittedly still-engrossing sense of accomplishment upon acquiring a gem or even just making it past an obstacle bleeding you of lives — is that it only shines welcome light on how well Crash, under Naughty Dog, was able to build on its successes over the years to become one of platforming’s most iconic and inspired IP’s. And Vicarious Visions, as a result, satisfyingly (though not flawlessly) deliver on keeping the series’ core mechanics and design far afield from mere nostalgic bliss. Perhaps there’s no better or immediate a reflection of Crash‘s balance of persona and playability than the opening, introductory animation that greets us on boot-up; series antagonist Dr. Cortex gallantly proclaiming Activison & Vicarious Vision alike before we’re greeted by a more rigidly polygonal character literally undergoing the remaster treatment — the inevitable, if simple, revelation following up that…yes: “it’s Crash Bandicoot!” 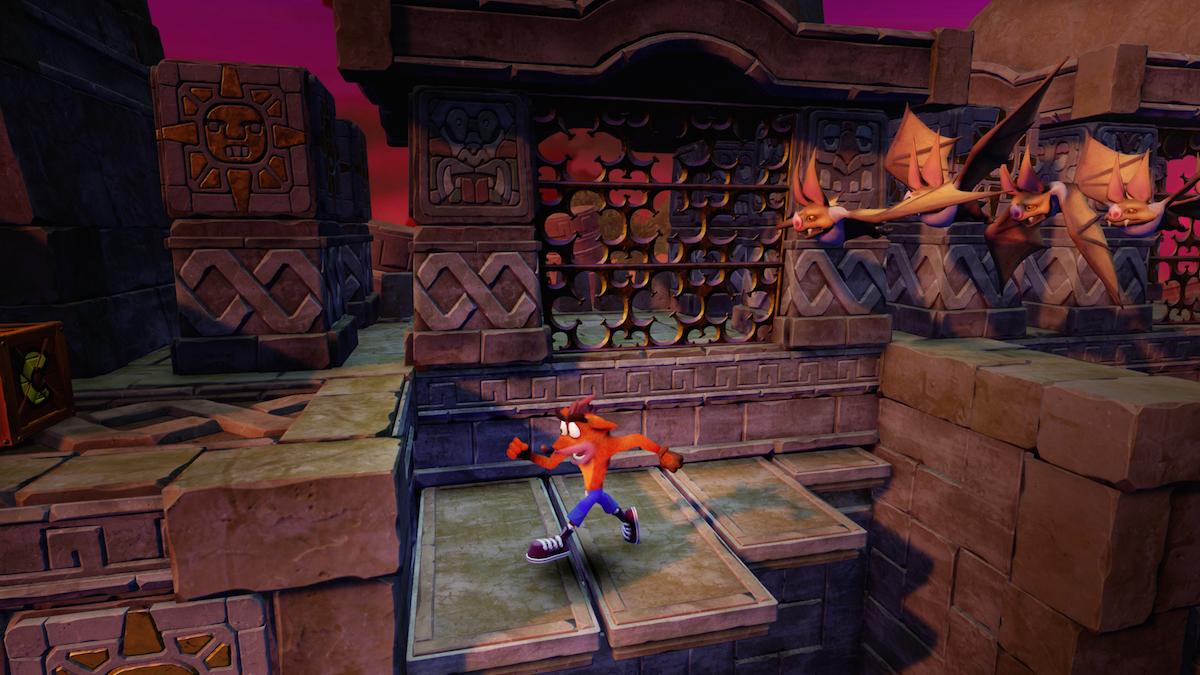 It’s these little nods and notable throw-back’s to the original’s careful balancing of gameplay and presentation, that helps elevate the N. Sane Trilogy past the moniker of simply being a current-gen remaster. That’s not to say Vicarious’ visual enhancements should go unnoticed. Far from it: at the best of times levels, that may very well define (for good or bad reasoning) the series’ tight, linear, short-term bursts of moment-to-moment challenge, are given a radical overhaul. The basic geometry of such environments and surroundings, though not exactly added to on a grand scale — outside of niceties like added foliage in the jungle/forest-themed levels for example, or less jagged settings — are certainly boosted in their presence with notable lighting, color vibrancy and indeed a boosted poly-count offering commendable attention to the developer’s wider field of view. Allowing some of the series’ varied assortment of environmental locations and aesthetics, as a result, to flesh themselves out further.

Not all levels are treated with as much the same tender detail admittedly — restricted instead to higher-quality textures and an ocassional shift in lighting quality — but that takes nothing away from the satisfaction of the gameplay’s main controls which, for the majority of times, retain the series’ tight, tactile-centred demand for delicate movement and careful attention to one’s timing in order to succeed. That’s of course leaving out the added leisure/desire to 100% (or 102% as the case may be) every crystal, gem and relic found throughout — requiring players to go entire levels without dying; finding secret routes accessible both in and outside their associated levels; even back-tracking large swathes of a level in order to break every crate present. Making sure to avoid every pitfall and peril out of shot. Nearly two decades on and despite its potentially simplistic appearance, the gruelling obstacle course-like allotment that is Crash Bandicoot‘s main selling point is a formula that seldom wanes, bringing a lofty high upon conquering. Even with the original Crash‘s slightly more sluggish pacing and limited variance in level design — demanding an even greater level of skill in just surviving (let alone mastering) particularly perilous moments. 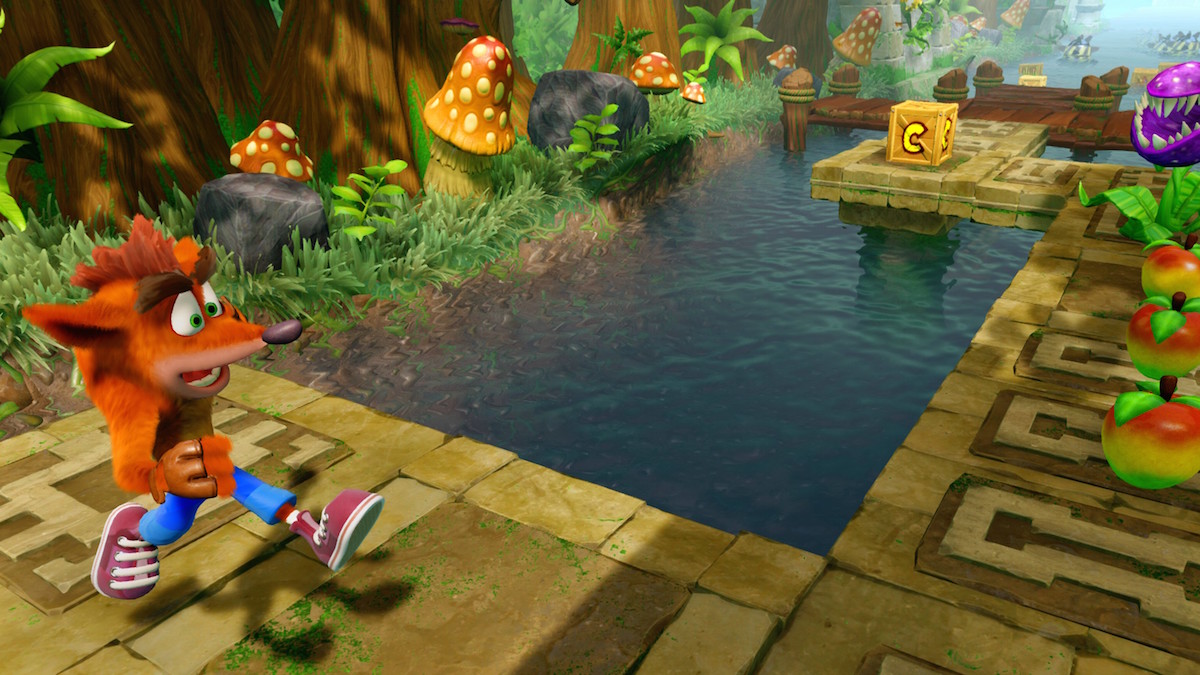 Speaking of which, Vicarious’ decision to maintain the original’s more restrictive and dare I say, frustrating limitations in movement does bring an unwarranted level of difficulty that, unfortunately, subtracts from the experience rather than adds to it. The same goes for some of the later trilogy’s vehicle-based sections (notably Warped, with its jet-ski levels, motorcycle races and underwater scuba moments) which, at their worst, handle poorly when caught in a tight spot — worse in fact than their PS1 counterparts. Often forcing players to wrestle with the in-level physics dictating one’s movement, an eventual nuisance should speed be the objective. Not all of the new overhauls, fortunately, suffer from this manner of annoyance and if anything constitute as some of N. Sane Trilogy’s more exclusively unique aspects.

For starters, the time-trial Relic challenges, introduced in Warped, are now present in all three games, allowing players to test themselves against the clock across all of the trilogy’s seventy-plus levels — the only means of reducing one’s time, by breaking specifically-marked crates. Another new feature is the ability to switch playable characters — from Crash to his sister Coco — across all three main games (outside of character-specific, vehicle levels) at any time, though given the familiarity of moves and abilities, this can be regarded more as cosmetic option above all else. Perhaps the most prominent inclusion is the overhaul in sound design the trilogy receives across all areas. With mixed results.

Be this newly recorded voice-work, a complete reworking of each game’s soundtrack and indeed the sound effects found from item and enemy interaction. While the music retains the series’ melodic emphasis, both sound effects as well as the more notable voice-work during cutscenes, ends up lacking a notable amount of the original iterations’ smaller quirks and mannerisms. Mixing too can offer a muddied moment where either voice-work or sound effects at given moments are quieter or not as prevalent as they should be. Thankfully, such instances are rare. So with that, let’s end things by [finally] addressing the elephant in the room: the frame-rate. While it would have been desirable to have an option to play at 60FPS, the motion-blurred 30FPS limit, thankfully doesn’t prove as much a bane as it might initially entail or seem, quickly settling into the backdrop much like the game’s minuscule instances of one-off frame dips or indeed muddied sound alike. 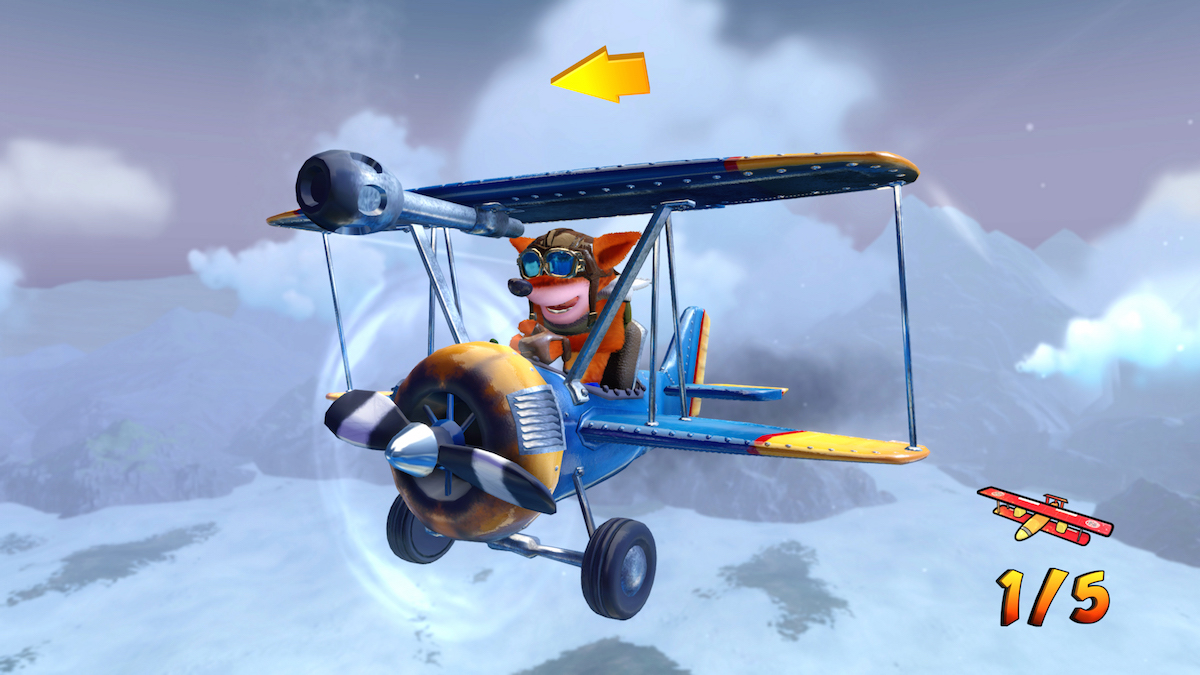 While the N. Sane Trilogy is by no means the perfect and/or flawless remaster fans and interested onlookers may have wanted, there’s no denying that a lot of Vicarious’ microscopic and macroscopic attention to detail alike is demonstrated sufficiently well in Crash’s current-gen revisit. Ignore the occasionally stilted voice-work or odd mixing of sound and what you’ll find is a remaster that thankfully goes beyond the mandatory better visuals — providing, on top of that, added incentives to revisit one of platforming’s most iconic and, above all else, enjoyably challenging iterations. Though the changes and tweaks aren’t as radical, it’s a fond return to a former joy that isn’t just glazed nostalgia. Crash Bandicoot N. Sane Trilogy is a fitting and well-sought retrospect to one of PlayStation’s most iconic stars.