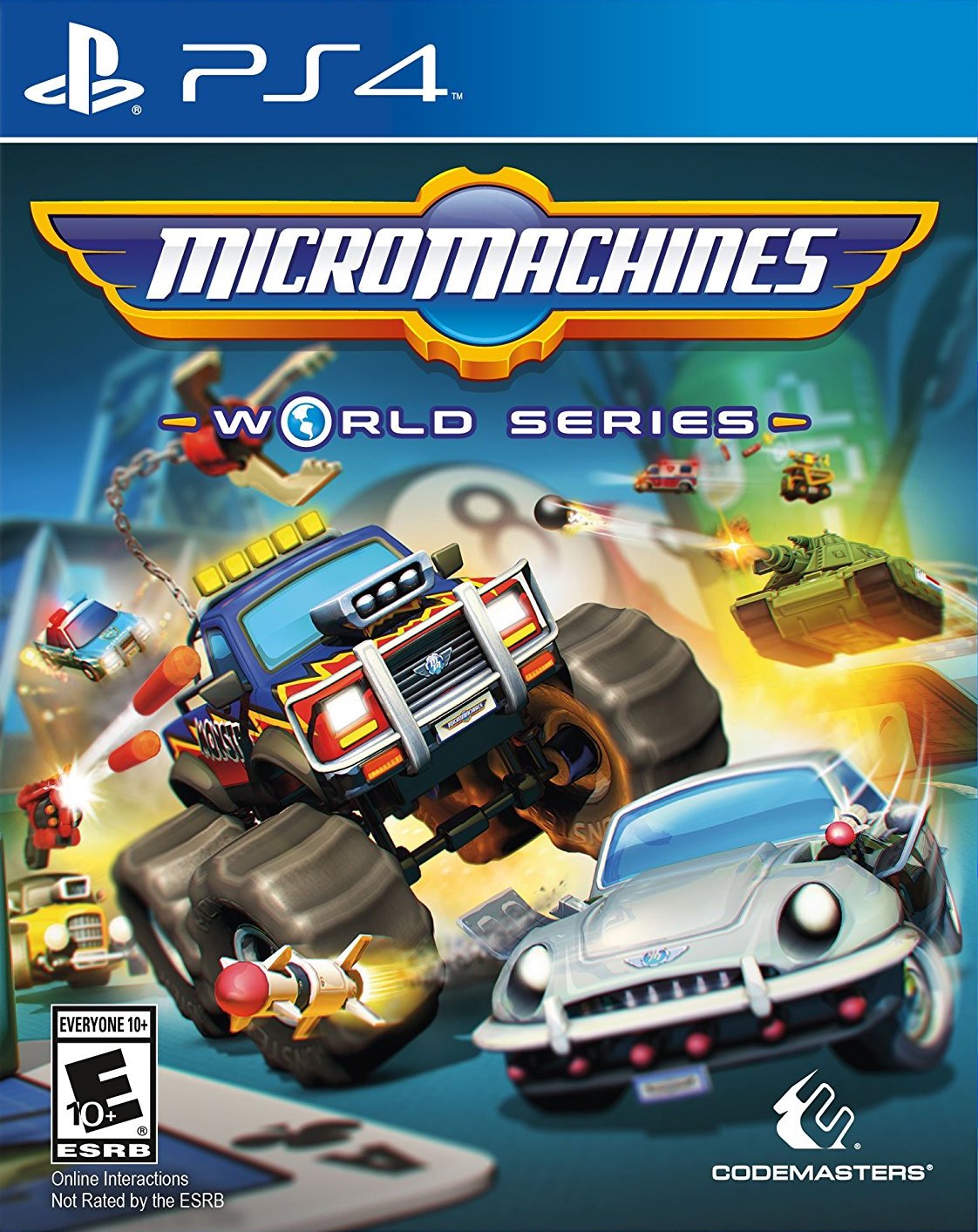 Codemasters has been associated with the Micro Machines license longer than many modern-day gamers have been alive. Since 1991, they have created some of the most enjoyable multiplayer-focused racing games that have spawned countless imitators. Digital storefronts are littered with toy car-based games that take you around tracks inspired by real parts of a house — but none of them have had the polish or charm of a Micro Machines game. Over the past 25 years, the beloved tiny toy car brand has not only been something that kids craved as toy fans, but also something that gamers could count on for a quality racing game.

The original game stood out because it was incredibly addictive and used real-life environments, which was unusual at the time. It was essentially a kid’s dream game for kids since it let you race a variety of vehicles against one another and do so in settings that every kid had at least interacted with at some point in their lives. The Sega Genesis classic has stood the test of time nicely, as has its PS1 follow-up from 20 years ago. The most recent game like this was Toybox Turbos, which offered up the same kind of thrills, only without the Micro Machines license. It was a fine test of the waters, and with solid marks, World Series looks to continue a longtime racing tradition for a whole new generation of players.

World Series offers up a healthy amount of variety in a well-crafted package. You have traditional races with weapons, a battle mode, a battle mode with a bit of territory capturing akin to point control in an FPS, and a race mode where the first person to be run off the road by the ever-moving screen gets taken out for a round. Everything uses the same core racing mechanics, but blends them in different ways to keep things fresh. It’s a bit strange playing a Micro Machines game with a more modern trigger setup for acceleration and braking, but it does feel natural and adds more nuance to the controls. Before, without analog control, you went one speed and you couldn’t really perfect your positioning with much ease. Now, you can — at least in theory. 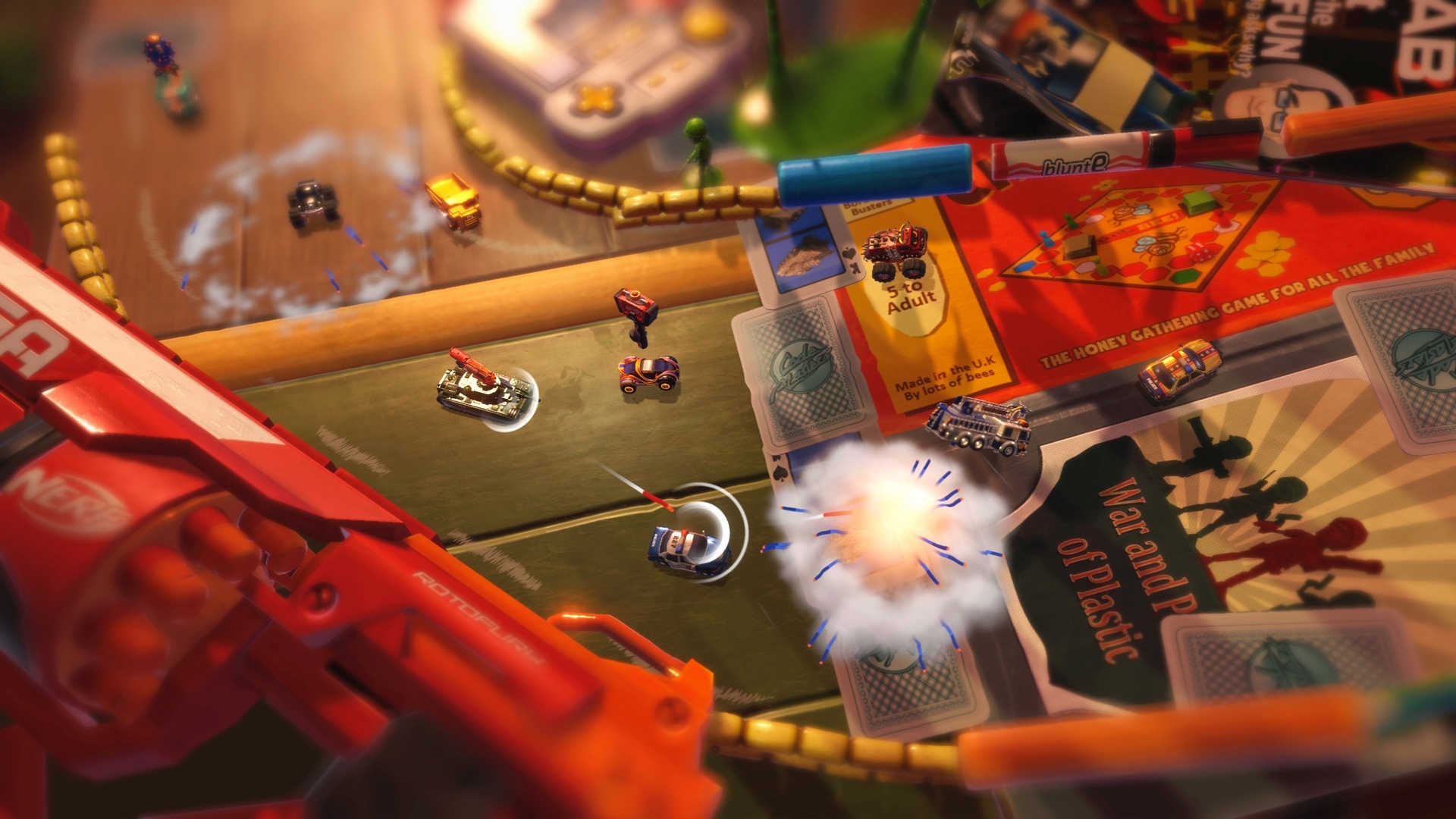 One downside to the all-analog controls, from the gas and brake to vehicle movement, is that your momentum feels far different here than in any prior Micro Machines games. Controls are much twitchier and you have to be far more deliberate in your movements to succeed. If you want to take a tight corner, you need to do so carefully to avoid oversteering — which everyone who plays this will do for at least a little while. After about half an hour to an hour, you should get used to this to some degree and do far better in every kind of competition. The ones with increased tension are your greatest tests, because the basic racers are something that every player is going to be the most used to.

With races, all you have to worry about is preventing oversteer and avoiding weapons. None of the in-game weapons are Blue Shell-level of cheap, but some like the mallet will have you keeping a safe distance at all times whenever possible. Knowing that a weapon could take you from first to last place in an instant ensures that you pay attention to the track, your positioning, and teaches you to play conservatively. Sometimes, the path to first is to stay in the back of the pack and let everyone else either make a mistake or take each other with weapons. It is a risky approach, but one that should at least ensure a podium finish if not a first place finish.

The battle modes up the ante with an emphasis on weapons, but actually require far more precision than event the races. Because they are more combat-focused and change your loadout, you need to be able to both drive accurately and know when to stop and just spin around to attack enemies. Having things like a homing shot as an option makes things a bit easier — but won’t do as well as a direct shotgun blast on its own. Whether you’re fighting to be the last man standing or gain control of the most turf, you will have to learn how to balance driving and shooting to excel. 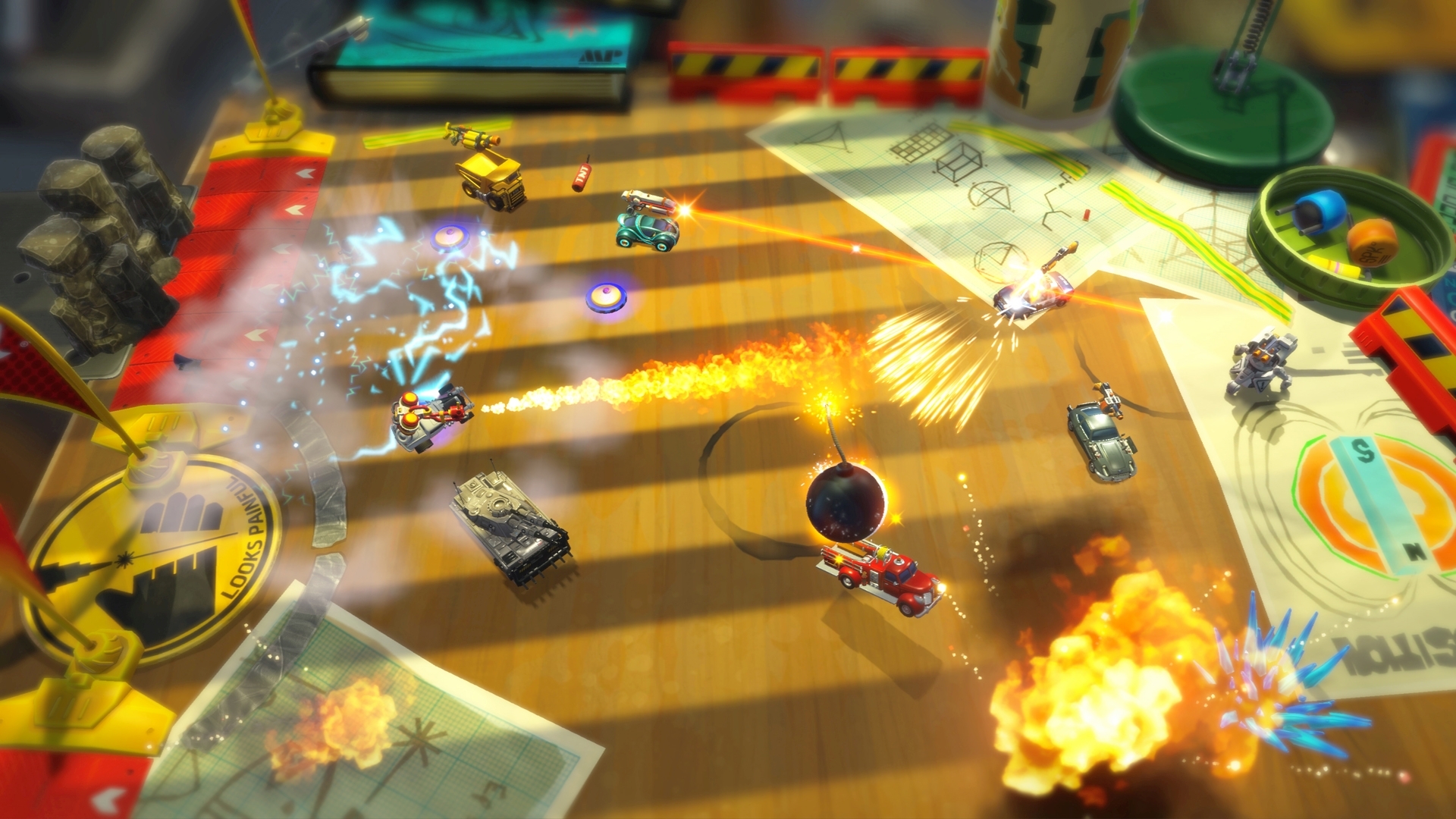 The game’s robust mode selection is playable online and is a ton of fun either locally or online. It’s a blast to just destroy friends (not so much to have them cuss you out there) and no matter how much time passes, no one can stand having a toy destroyed — even if it’s just a virtual representation of one. The hyper-competitive nature of the game brings out the best in online players more often than not and it feels great to have a game that mixes kid-friendly content with adult-level gameplay online instead of having something with an all-ages appeal that winds up pandering to just kids. The track selection here works fine for kids, while the little background things like GI and Hasbro toys will make the late-’20s and 30-somethings playing it for a nostalgia kick happy.

Visually, World Series is far more good than bad. The cars themselves look good, with the environments usually looking incredible. Between the high-resolution texture work and best in class depth of field work, this is an impressive game to look at more often than not. Some issues do crop up when it comes to those textures not loading in instantly — resulting in a muddy mess that is a bit of an eyesore. Hopefully, this is something that can be patched out soon enough because it’s a fairly noteworthy blemish on an otherwise impressive-looking game. The depth of field work here is honestly amazing given that this is a licensed game and yet you have all sorts of lens blurring effects to show fast motion and make the track parts you fly away from look that much further away. It’s incredible to see in real-time and is something that more action-oriented racing games could learn from.

World Series offers a satisfying mix of weapons to use, and they tend to sound really good. The smooshing effect of the mallet is replicated perfectly thanks to the sound effects, while things like the pellet gun feel as puny as they should. The roar of the cars themselves is nothing special, but with the premise being that these are basically barely-powered tiny toys, that also works. The music could definitely stand to be better though. It’s fun and cheery enough and fits the settings, but doesn’t stick with you while playing — let alone remain something that is stuck in your head after a long play session. 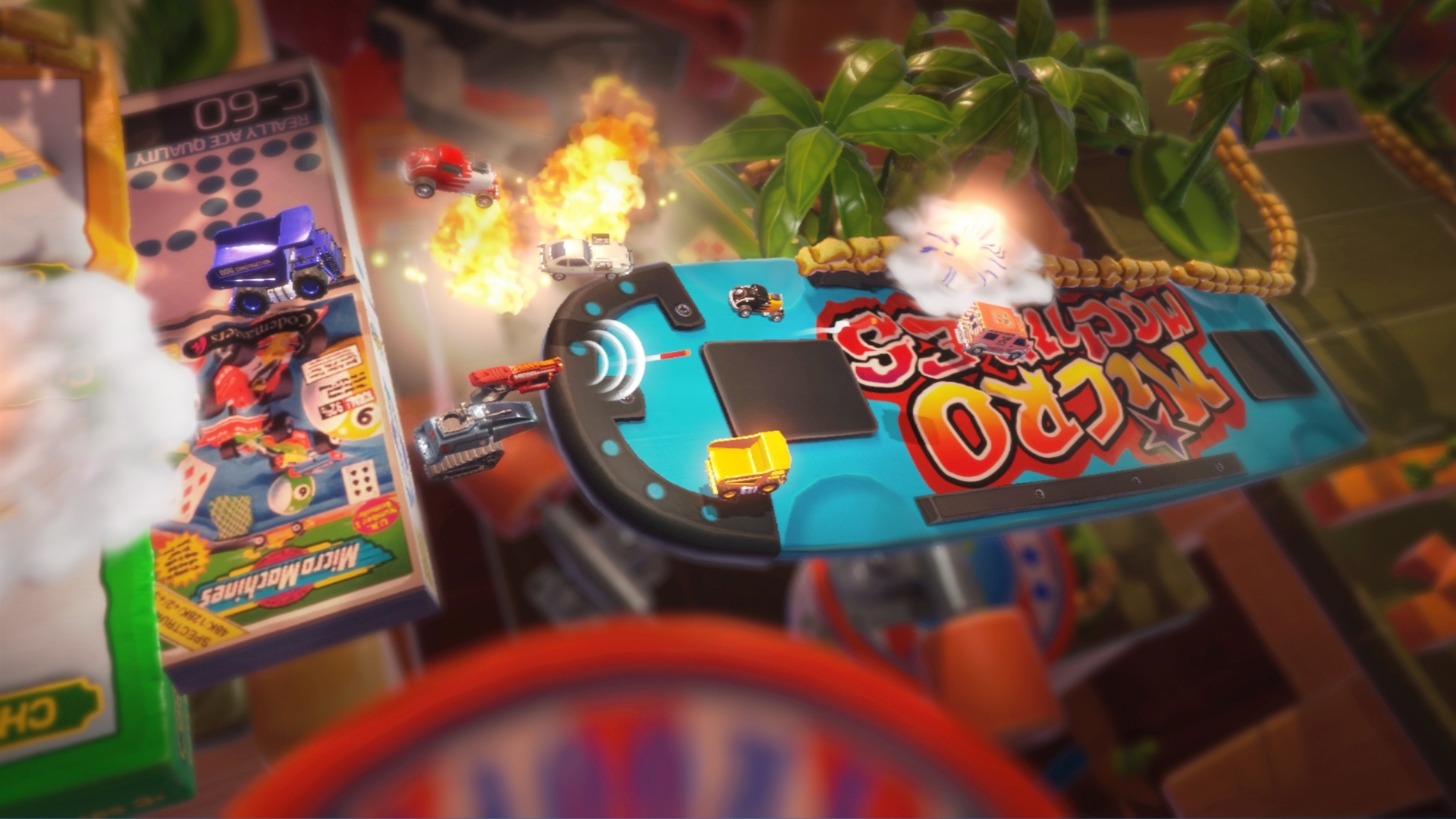 Micro Machines World Series is a great buy for anyone who enjoyed prior entries in the series or simply wants a great racing game that the whole family can enjoy. If you grew up in the early ’90s or just have an affinity for the license, it does it justice and delivers a rock-solid racing experience as well. Its mode selection is impressive and there’s always something to do if you’re tired of racing. Each battle mode mixes things up in interesting ways, while the elimination race keeps you on your A game at all times. While the soundtrack is forgettable, World Series is a visual treat thanks to some impressive texture work along with an impressive depth of field.