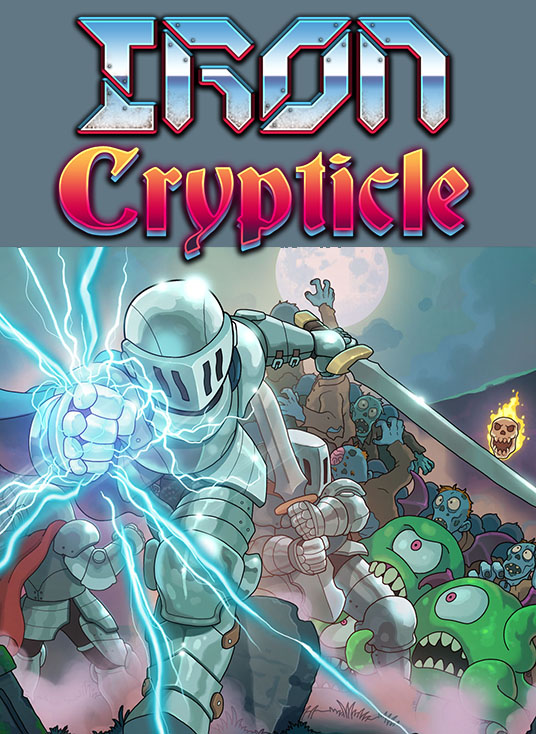 It was a dark and stormy night.  The raging tempest battering the stout castle walls made no impact on the peaceful scene inside as the knight-protectors of the realm relaxed with the king and princess in the comforting presence of the kingdom’s treasures.  The rain tapping against the windows only served to heighten the false sense of security as it failed to do more than provide an audible reminder that the cold, wet weather was outside, and the throne room was warm, cozy, and lit with gold tones from the reflected firelight.  Suddenly, with a thunderous peal and flash of lightning, the evening’s reverie was  destroyed by a demonic form bursting through the window and down through the floor, taking the princess and all the treasure with it.  The noble knights lost little more than a handful of seconds to shock before springing into action, diving into the catacombs deep underground to give chase to the monstrous being that would leave the kingdom grieving losses both financial and personal without their heroic intervention.

While Iron Crypticle may open on a narrative cliche, the game is all about twin-stick shooting rather than purple prose.  The knights’ quest to regain the kingdom’s treasures takes them through room after room packed with monsters and hazards, and the only thing saving them from instant death is an unlimited supply of weapons and generous item drops.  The default throwing axe packs an adequate punch and a barely-tolerable fire rate, but new weapons and other pickups drop into each room at a steady rate, temporarily boosting their destructive power for as long as they last.  Enemies drop food for point bonuses, treasure chests have coins, and plenty of other bonus items keep you not just shooting the monster waves down but plotting the safest line to the next pickup.  Carving out a safe space may be a viable strategy for survival but it’s not going to be anywhere near as much fun as chasing after the goodies littering the dungeon floor.

From one room to the next, Iron Crypticle plays out like a fusion of Robotron and Pac-Man as you blast enemies, work the dash move to try to keep the food-combo alive for maximum points and stat bonuses, and learn the secrets to harvest the most items once the room is cleared.  Monsters drop food, and while it doesn’t heal you it does add points to the score.  The first one collected is 100, second is 100×2, all the way to 100×8, and if the chain lapses or you take a hit it drops back to 100 points again.  Keep the x8 chain going, though, and you earn a random stat-enhancing drop that can improve movement speed, fire rate, weapon duration, or shot power, and even if you don’t feel like playing for points those bonuses can be invaluable.  I didn’t notice much difference to a stat with just one collected, but once you stack three or more in a category it’s clearly more powerful than it was at the start of a run.  There are no permanent stat-boosts between one run and the next, but you do unlock new items that may be dropped randomly as you go.  More weapons, magic scrolls, and other strange items pop up, and if their effects aren’t immediately clear then the Ledger can explain what finding a stuffed panda actually does for you. 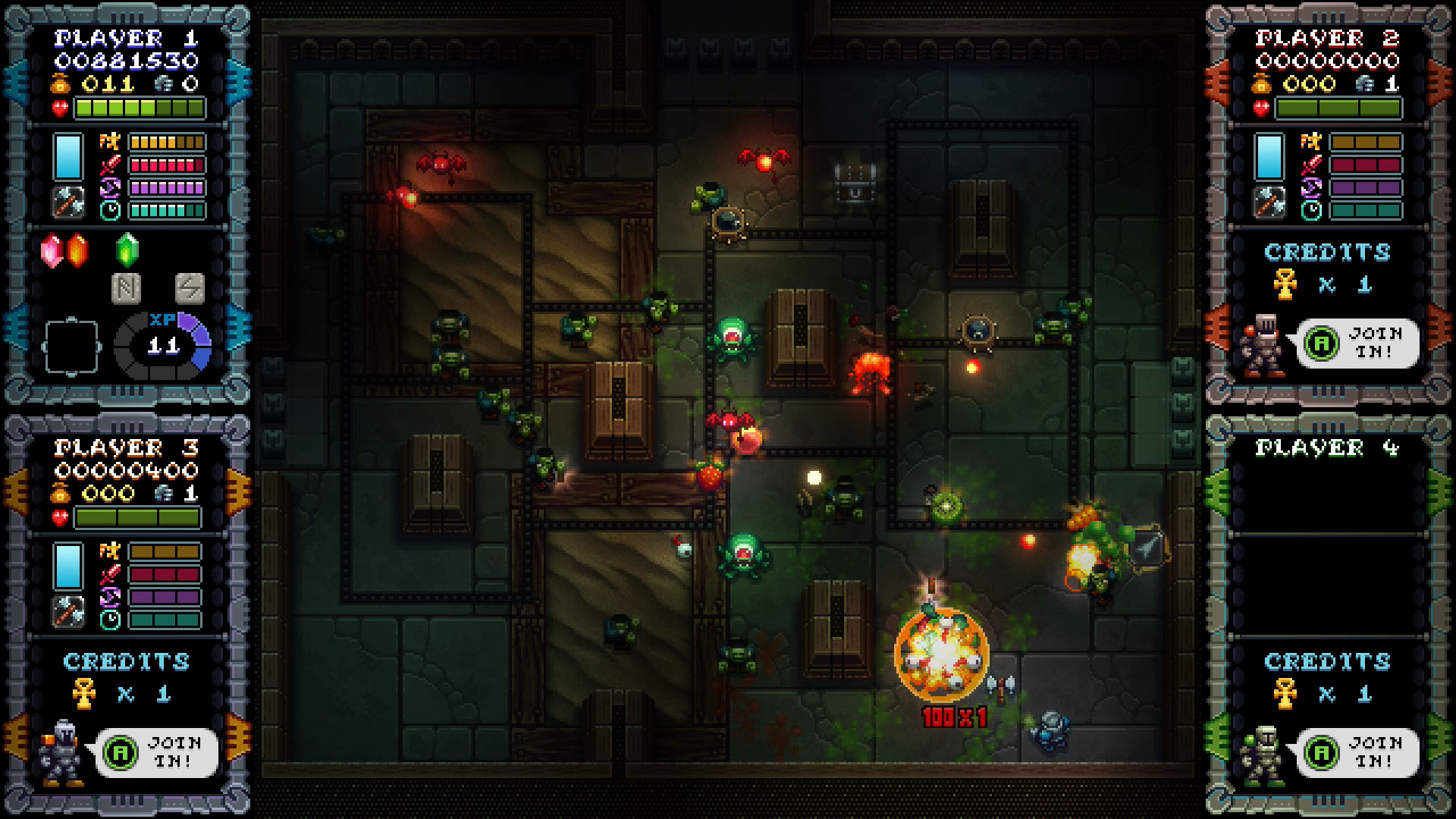 The earliest enemies are mostly content to just walk at you, but by the time you reach the second floor they’ve broken out the firepower and other ranged weaponry.  Each floor consists of a series of rooms branching off from each other, going from left to right, and you can bring up a map at any time to get a sense of what’s next.  Blank rooms are monster waves, but there are also shops, graveyards, insect infestations, and even an arcade.  Each type of room has its own enemy setup, whether that be a random selection of baddies in the regular areas or nests that pop out bugs in the mud room.  Unless you find a map of the floor you can only see rooms branching off from the one you’re in, but that’s usually enough to make a good short-term choice.  Spending a few coins at the arcade to play a side-scrolling platformer, or dropping by the shop to pick from a random selection of four items, can be just the thing to perk up declining health or get ready for a boss battle.

If it isn’t obvious by now, Iron Crypticle isn’t a particularly serious game.  The point pickups are styled after Bubble Bobble, the item descriptions are written with a sense of humor, and you’re chasing after a kingdom’s treasure in the form of giant golden food.  The entire game is an arcade throwback, and that includes the good-natured sense of humor that so many of them had.  The enemies are dangerous but also cartoony, more of a threat by sheer volume than anything else.  Iron Crypticle is very “video game,” but one best played with friends.

While single-player is an option, the later levels feel tuned for more people.  The first few levels are eight rooms long, but once you get to the third floor they’re eleven, including the boss, and that’s a lot of shooting for a single player.  I generally wanted to put things up for a bit around the fourth floor, but without a Resume Game there was no choice but to quit or keep going.  Multiplayer is for up to four people, local-only, so finding a game online isn’t an option.  While having two or more players would do nice things towards shortening the marathon, single-player would have been improved by a shorter, more intense option.  There’s an Endless mode that works nicely for this, when all you want is a quick round of monster-shooting, but the main game tends to run a bit long once you get in enough practice to clear a few floors. 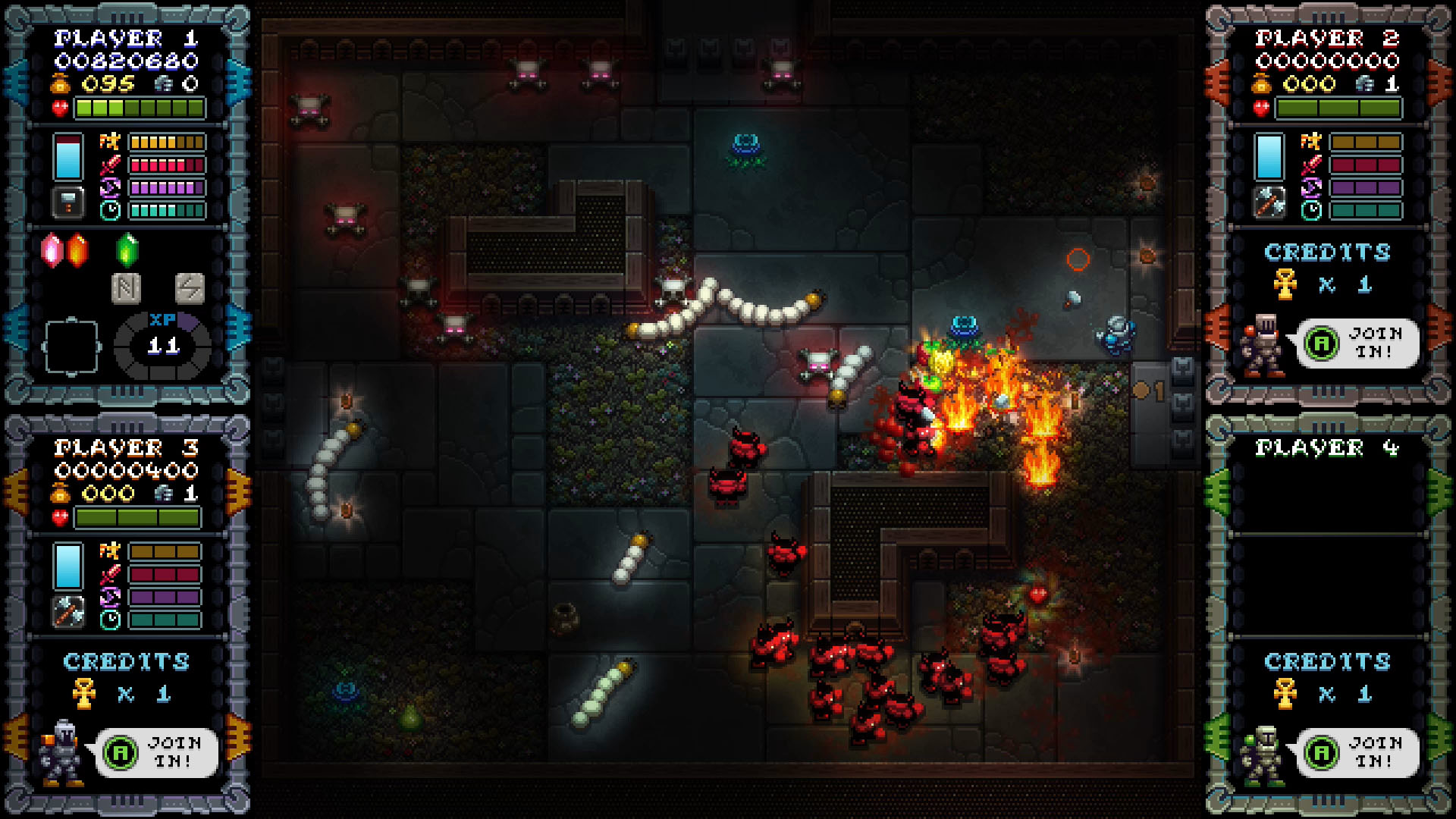 While a bit slow to get going, there’s a great amount of variety in Iron Crypticle once the action heats up.  Monsters come in all shapes, sizes and attack patterns, and if not all of them are directly harmful, then being rooted to the spot for two seconds can be just as maddening as taking a hit.  The food combo clock is always ticking, pushing you to kill and collect faster to get the necessary power-ups to survive the later areas, although if you can’t quite manage that then you can still get by from exploiting the weapon drops.  The dungeon is filled with events, rooms, and diversions, and unlocking everything in the Ledger will require surviving everything it can throw at you.  There are secrets to uncover, scoring bonuses to maximize, a kingdom’s treasure to retrieve and the princess is down there somewhere too.  It’s a tough job for the knights of Iron Crypticle, but it beats sitting on their rusting armored butts listening to the rain on a dark and stormy night.