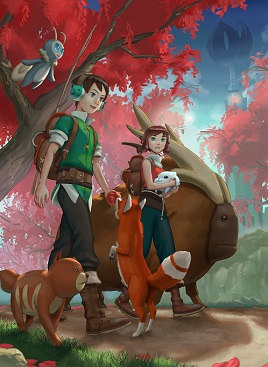 When playing Prideful Sloth’s inaugural title, Yonder: The Cloud Catcher Chronicles, I found myself traversing a green field that was obviously supposed to feel full and lush. The wife had looked at the screen for a moment and asked, “could they only afford one shade of green?” “No,” I responded, “there’s two. See?” Rotating the camera around, she somewhat conceded the point, qualifying it with a reluctant “I guess.”

Considering that this is a person who praised the graphics in last year’s Ghostbusters travesty as being its only highlight, this is the last person a developer wants throwing shade on the looks of a title. The thing is, she wasn’t necessarily wrong. This is a title that has the appearance of cutting corners to complete a project. Everything from the graphics to the gameplay has a feeling of being overly padded to the point that it might as well be wearing a children’s bouncy house as an overcoat, without the implicit fun such a wardrobe would promise. A title like this is simply not the best impression a first time studio featuring ex-Rocksteady employees could make.

As far as set up goes, the (barely) player-created character is on a journey to their childhood home, armed only with a compass left by their parents that magically points the way to the next thing that needs to be done. On this seaward trek, the ship sinks, and the protagonist wakes up pretty much where they meant to land anyways. Why bother setting up a shipwreck for the plot? This event doesn’t seem to affect any portion of the gameplay outside of a quest to find missing sailors. Even that chore could have easily been replaced with missing family members or whatever. The hero quickly learns that the world is experiencing pockets of “murk” (Read: The malevolent manifestation of the “purple stuff” in Sunny Delight commercials) that can only be cleared using little fairy-like sprites that can be found throughout the landscape. As the protagonist is the only one with the ability to see these creatures, (s)he is the sole person who can rescue the land and make the world a better place. 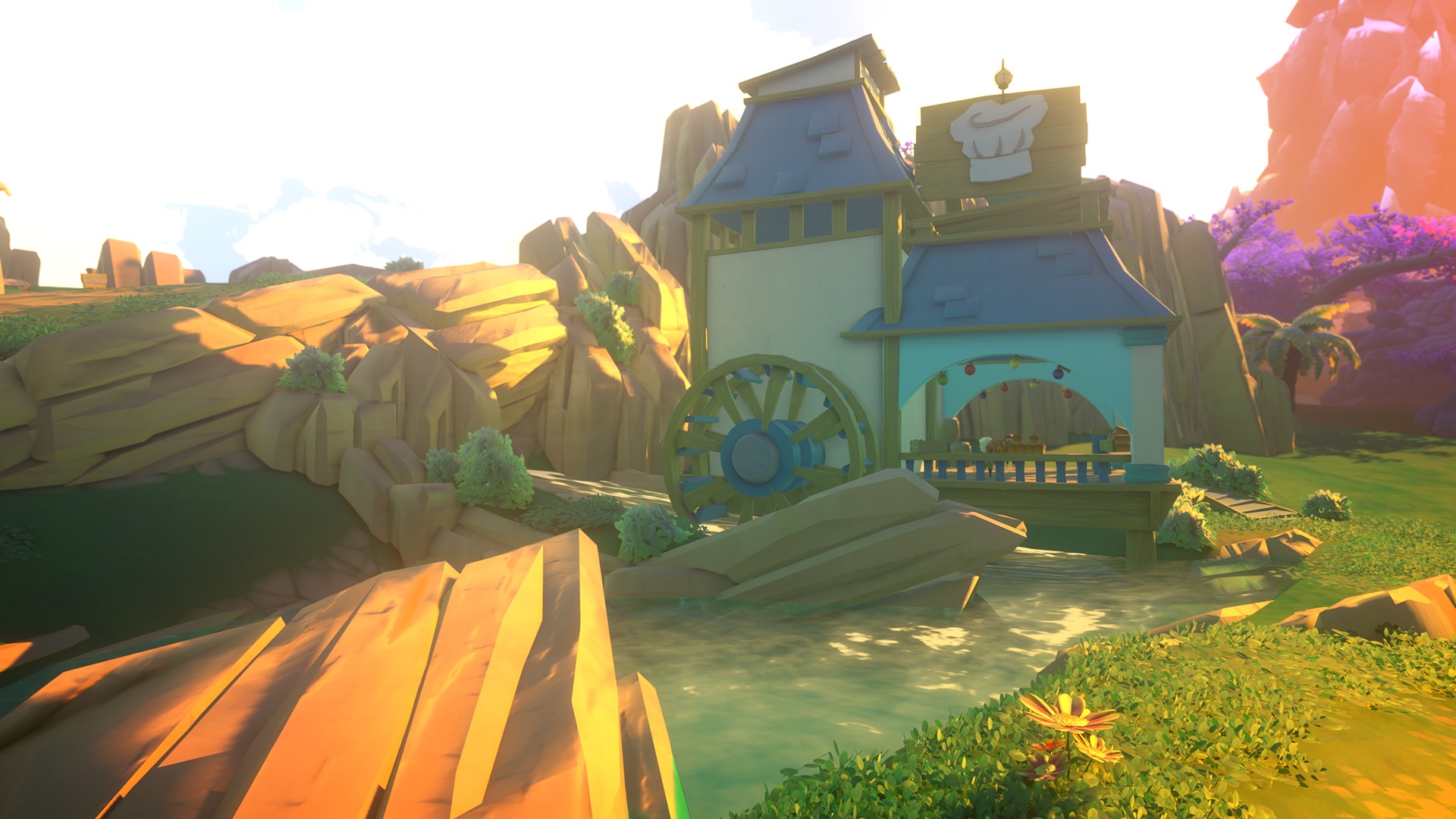 While this plot sounds like the set up to a family friendly 3D platformer, the game itself is decidedly less reflex involved. In fact, the pure concept is where this game manages to put any points on the board. This is meant to be a relaxing title that is built around exploring the eight different biomes, solving non-violent quests, and making the land a better place through pacifistic means. The idea of basing a design to just be something with which to chill out, with actual “challenge” simply being exploration and solving the woes of the populace by providing crafted items, and death not being an issue, could actually work. It doesn’t here.

Part of the problem lies in the graphics. When I started the game and came face to face with the character creator screen, I sighed. Each of the character models looks like someone with a PlayStation 1 SDK was kidding. Each human looks angular and sharp when edges should be round, and vice versa. It’s amateur hour. This extends to the animals themselves. Some of them can kind of look cute. Then they are seen in motion, showing a bizarre connection with the laws of gravity and the ground. It’s really distracting. 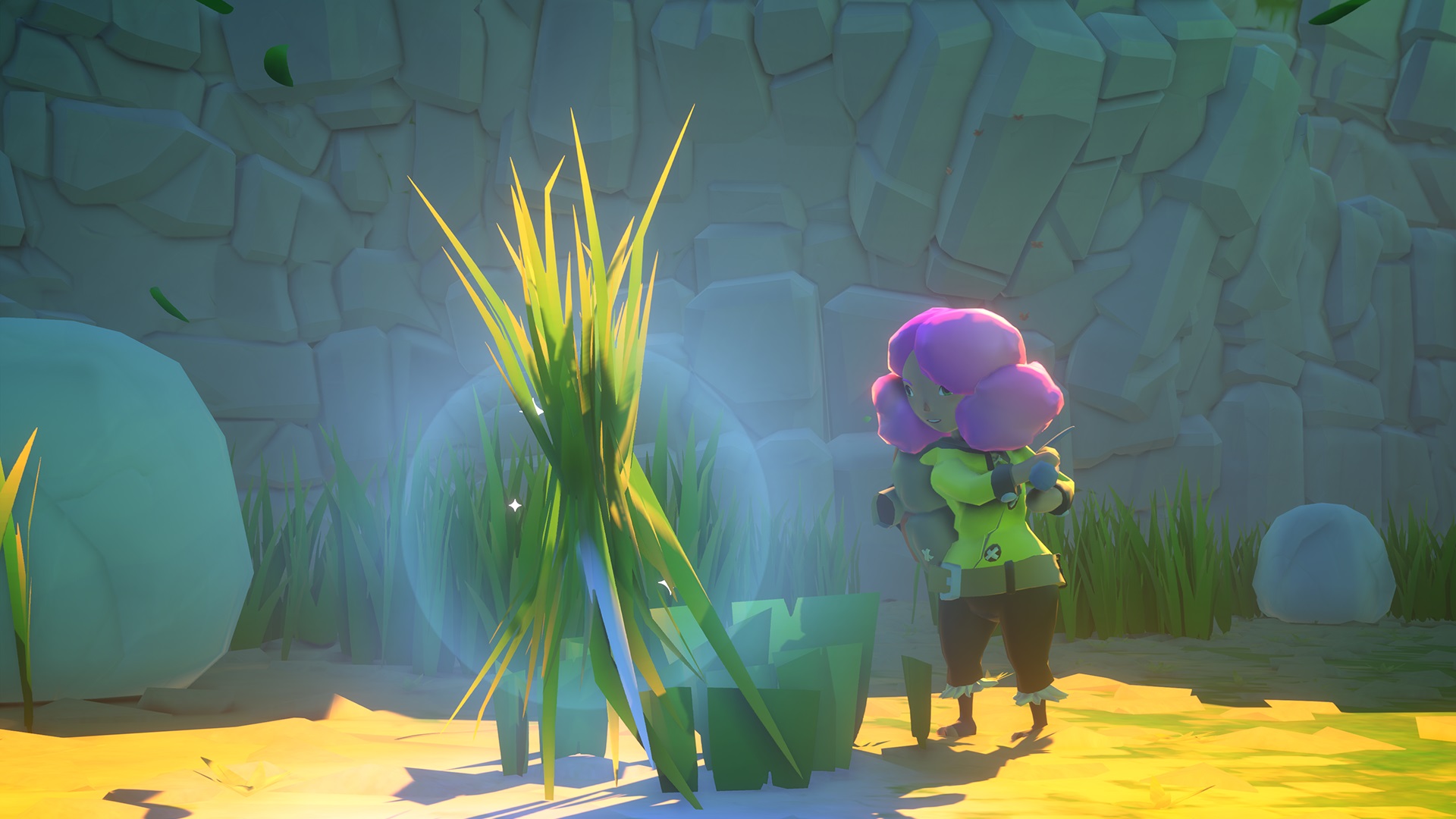 Some might look at the screenshots and argue that the graphical work was spent on creating some beautiful environments. It can look stylized and striking in screenshots. In motion, though, the title drops frames like it’s hot and tearing is a constant issue on the PlayStation Pro. As this isn’t pushing out high resolution textures or character models with oodles of polygons, it simply makes no sense.

Spending so much time harping on about the graphics might seem petty. After all, there are plenty of incredibly engaging games that eschew big budget technology. In a game like Yonder, though, the mechanics simply do not make up the difference. Structured as a never ending series of fetch or crafting quests, players will speak to a townsperson who asks that something be found and brought to them or something be created. The player then wanders into the world to do so, with the only variance being either the person tells you where what they want is located or the player has to find it. Even joining the a group of stone workers is just the kick off to a longer string of these tasks. Rarely are there even any rewards for completing these tasks. Sometimes the player might receive a cosmetic item to better cover the shame of their character model, or be provided access to a new area. 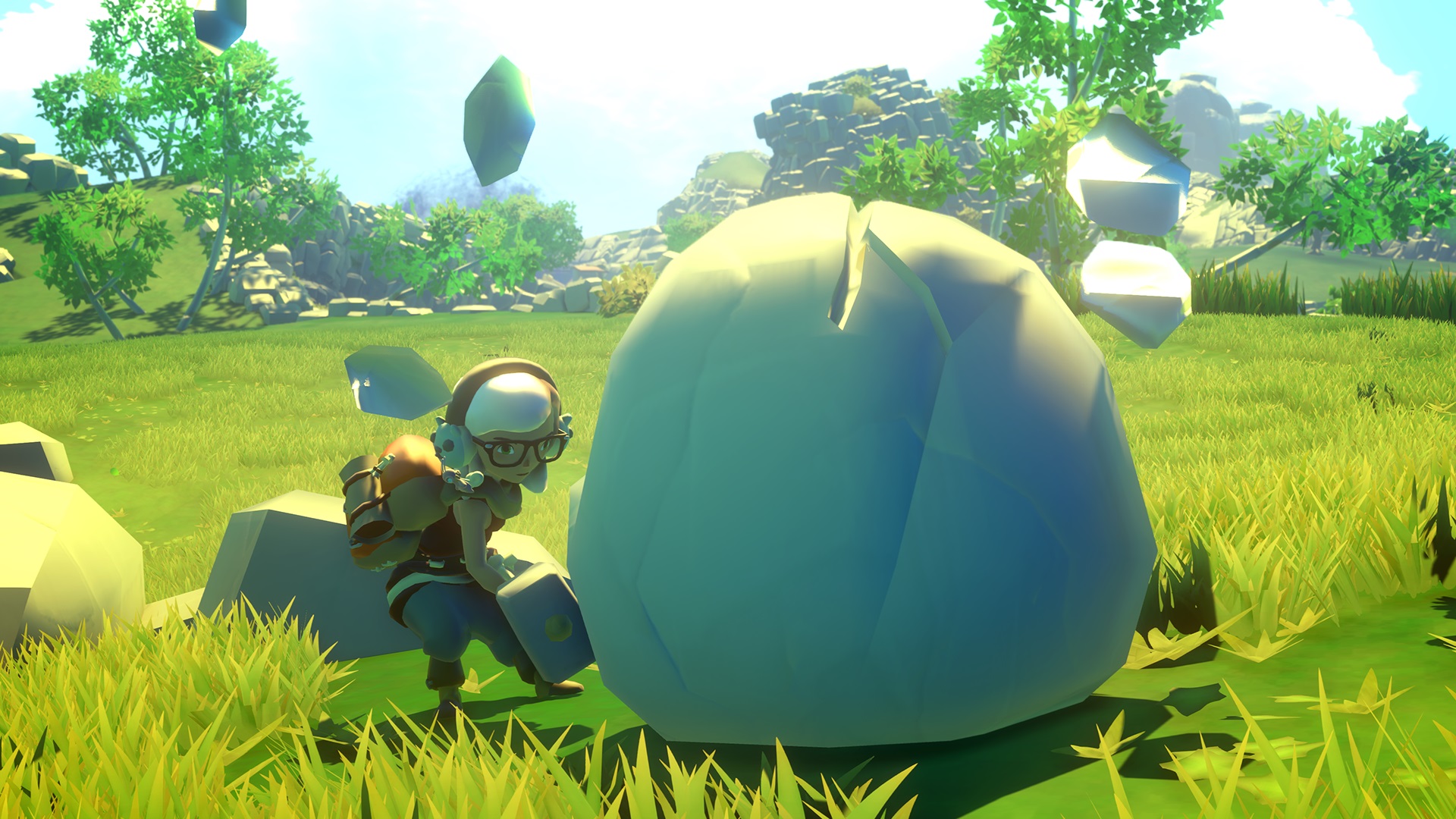 The major plot point of The Murk is a non issue. When it’s present, the stuff simply acts as a barrier to a (usually) small pocket of space. The player either has found enough sprites to clear it or they haven’t. Instead of using these moments for some rudimentary gameplay, it’s just another check mark for “completing” an area.

Despite being subpar in objective based gameplay, this still could have lifted itself up through virtue of its crafting and/or farming system. Crafting is a nonstarter, as nothing can be made without first finding the recipe, and there is no way to build up structures in the world outside of the farms. The farms themselves are a preset tract of land where buildings can be placed, animals adopted, and farm hands hired. This sounds like where the actual “stuff to do” portion ended up, but it’s lacking even the options that the worst of the Facebook games would offer. There is just a total lack of any player ownership to be found in the title. 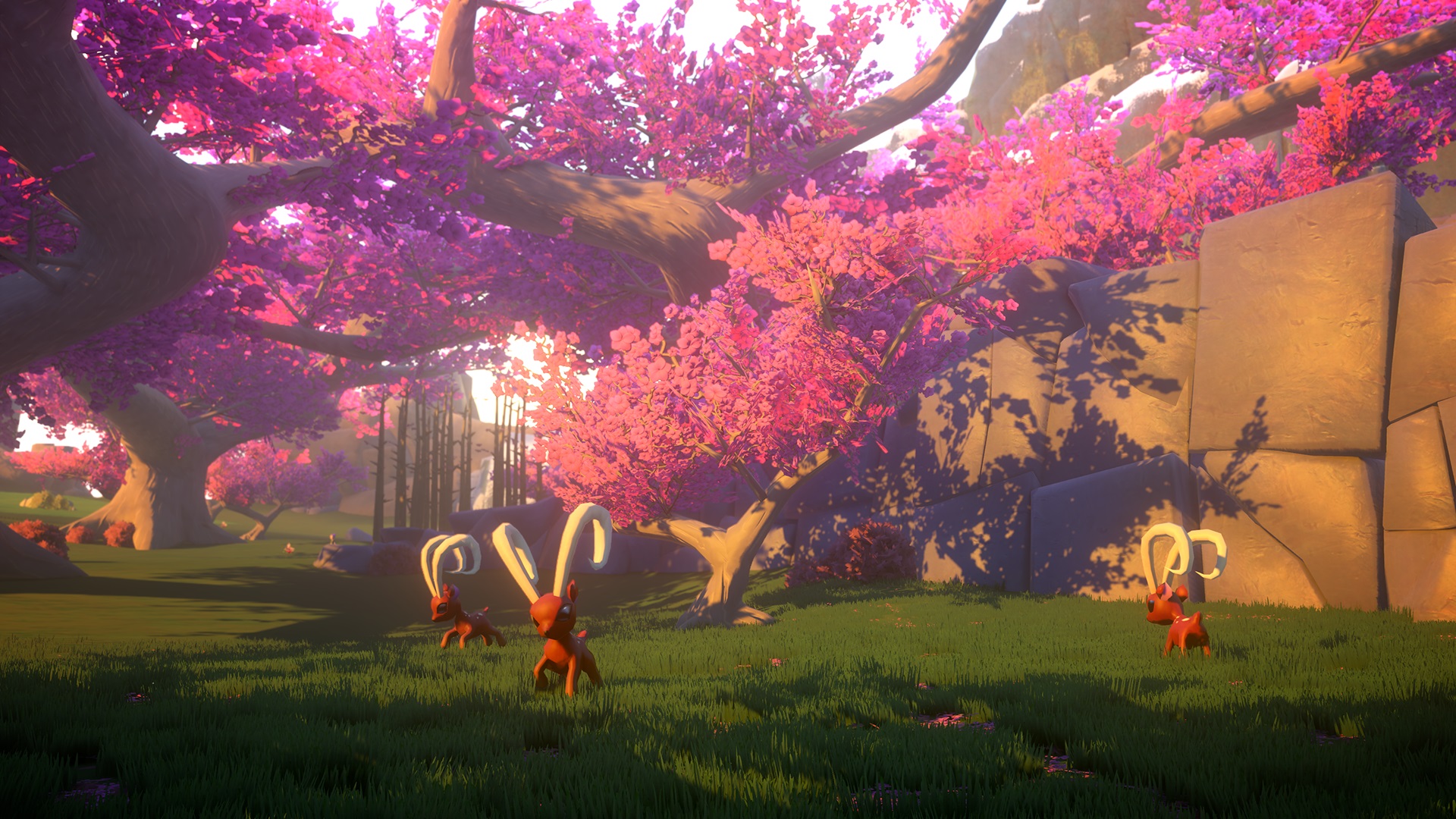 One cannot comprehend who Yonder: The Cloud Catcher Chronicles is meant to serve. Exploration is a chore based on frame rate issues and less-than-stellar graphics. Questing sucks because there is no real sense of progress or accomplishment. Farming and crafting is similarly pointless as there just isn’t a heck of a lot to do. I will confess to giving up after only a couple of hours in hopes that I was the recipient of Alpha code. After confirming that this wasn’t the case and no launch patch has come through, I contemplated jumping back in. Before doing so, I asked what the game could do to change my mind without a major overhaul and realized that the answer is nothing since Christina Ricci is married and I don’t think my wife would agree to that anyways.