Dragon Warrior IV came to the States in late 1992 for the NES after its early 1990 Japanese release. Despite a favorable reception from critics and fans, the two and half year old game fell under many people’s radar due to the SNES being available for over a year and more interest was focused on the newer and shinier titles on the 16-bit successor. Being a fan of the first three Dragon Warrior games, I shamefully missed this one until a couple years later when I found it at a video store going out of business and bought it for five bucks (take that eBay). Despite playing it for the first time a few years after its release making the dated graphics look that much more so, this ended up becoming my favorite Dragon Warrior game. I was sad when the scheduled 2002 remake for PlayStation was cancelled, but thankfully the revamped version made it stateside on the Nintendo DS title Dragon Quest IV: Chapters of the Chosen.

Dragon Quest IV brought a lot of changes to the series. The first three games were all tied in some way to the legendary hero Erdrick (or Loto, depending on console), and this began the Zenithian trilogy, though the connections between IV, V, and VI were not as strong as they were in the Erdrick trilogy. The story progressed through specific chapters that were their own self contained stories until the final chapter, and each party member has their own name and personality and could be swapped in and out of the party at the player’s discretion. Dragon Quest II touched on this a little with the Prince of Cannock and Princess of Moonbrooke, but their names were somewhat random based on the Prince of Midenhall’s name.

Dragon Quest IV consists of six chapters, five from the original and a bonus post game chapter added to the remake. The first four chapters focus on a an individual or small group of heroes that will eventually meet up and join with the legendary hero in chapter five. This approach made it easier for the player to focus on each character as an individual and learn about their personal stake when they do finally meet up with the legendary hero, and provided some rather unique quests. This is a twist on the standard Dragon Quest formula where the player traditionally has played the legendary hero from the start, but as a narrative device and a way to make the player care about each character this approach works very well for this game. 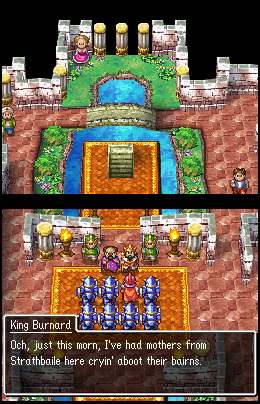 Chapter One focuses on the knight Ragnar McRyan who is investigating a bizarre case of disappearing children. Chapter Two is about Tsarena Alena, the princess of Zamoksva whose first order of business of breaking out of her chambers to go on an adventure against her father’s wishes, and she is joined by the cleric Kiryl and magician Borya. A twist on the more predictable role of a demure princess with her two bodyguards, Alena is a badass martial artist who delivers the heavy hits in battle while Kiryl and Borya are the more frail magic using types, and they sit out the coliseum battle at the end of the chapter where Alena single handedly dominates all challengers. Torneko Taloon is introduced in Chapter Three, and his goal is to become the greatest arms merchant in the world. Naturally his quests center on the accumulation of wealth to expand his shop and weaponry to sell for profit. His wife packs him a lunch each morning before he goes to work in his shop, which can be eaten to restore some hit points or sold for a tiny amount of gold, though what kind of person would sell the lunch his wife made for him? That was made specially for him with love, and worth far more than the meager 15 coins he would get for it. Chapter Four is about the sisters Maya and Meena, a dancer and fortune teller respectively. I preferred their names in the NES localization, Mara and Nara, just because I could call them the Sauce Sisters, a name that makes no sense with Maya and Meena. Their chapter is a tale of revenge about the murder of their father.

The fifth chapter begins in the hero’s secluded village, which unfortunately is in the process of being slaughtered by a group of monsters led by Psaro. With his/her hometown now an uninhabited pile of rubble, the hero ventures out into the world and joins up with the characters from the previous chapters at different points in the world, along with some NPCs that may hitch themselves to the hero’s horse drawn wagon, which may even include a baby dragon. This chapter is longer than the first four chapters combined, and there are quite a few memorable events. Climbing Yggdrasil to the floating kingdom of Zenithia and getting a personal hot air balloon were definitely noteworthy events, but the most memorable part to me personally was the Colossus. The Colossus is a dungeon near Riverton, which as one could guess from the name is a giant human statue. Upon successfully navigating through here, the player will eventually find the control mechanism and the Colossos will walk to the otherwise inaccessible area that allows the player to go to the Diabolic Hall, a castle inhabited by bad guys. 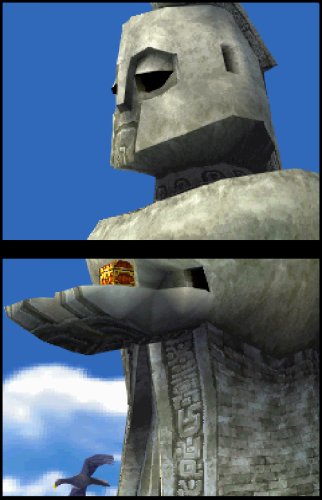 In addition to the obvious overhaul that the graphics and sound received, there were some other changes added to this version. Later Dragon Quest games had different accents and dialects based on different real world locations. The NES games were localized with just a general English translation across the board, but the DS ports were made to include these dialects. The kingdom of Zamoksva’s lingo is patterned after Russian, while Torneko speaks with an Irish brogue. Some of these dialects take a second to figure out what the text is supposed to say, but once the player figures out the accent the developers were going for it ends up being pretty easy.

Out of all the changes, my favorite improvement is one that seems like it is relatively minor, and that involves the party commands in Chapter Five. In the original game, once the player gets to Chapter Five the only character they have direct control over is the hero. All other characters are controlled by AI, with some general guidelines the character can assign. These could be things like use no MP or focus on offense. Dragon Quest games are rightfully not known for their awesomely helpful party AI, which anyone who’s played Dragon Quest Heroes II can attest. The DS version thankfully includes the choice of “Follow Orders” which allows the player to manually control each member in the party, NPCs notwithstanding. This seemingly minor tweak fixes the one major flaw I found with the original NES version. 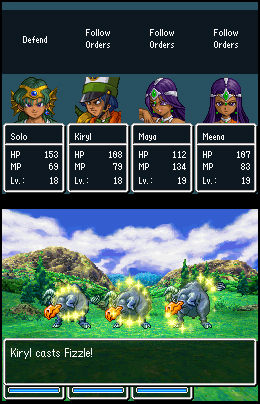 Dragon Quest as a franchise never reached the level of popularity in the States it enjoys in Japan, which is probably why the SNES never saw any Dragon Quest games and it was almost a decade after Dragon Warrior IV before another mainline Dragon Warrior (number VII) was seen over here. The entire Zenithian trilogy enjoyed new life on the DS, allowing long time fans to get a proper translation of the missing Dragon Quest games and get a nostalgia fix with the updated Dragon Quest IV, along with allowing a new generation of players to experience the classics on more contemporary hardware. It’s not a secret that I am a big fan of Dragon Quest in general and having played all numbered Dragon Quest games (except X) I would have to declare this one the favorite. What makes this title unique is that it maintains the essence of what a Dragon Quest game is, but stripped away the world of Alefgard and the legend of Erdrick and completely reinvented the franchise. Instead of playing as the legendary hero for the whole game that character isn’t introduced until a good way in, instead allowing the player to experience the stories of the supporting characters. And while it may not seem so impressive nowadays, the constantly evolving form of the final boss was impressive at the original release.