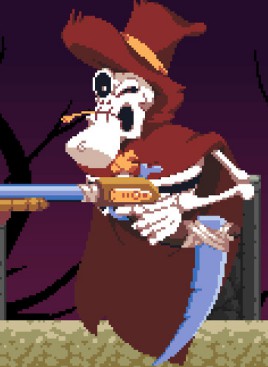 Things aren’t going well in Hunter’s life. You see, this fellow finds himself cursed by a monstrous voodoo skeleton named Mr. Saturday. Despite that cheerful name, Mr. Saturday has only one goal in mind — turn everyone into undead skeletons. He’s just put this plan into motion by summoning up all manner of skeletons to fight against the living and turn them to the bony side. Fortunately, Hunter has an enchanted boomerang up his sleeve. With this item he sets off to fight back against Mr. Saturday’s never-ending hordes and save the world. It might not seem like a fair fight at first, but your opinion will change after taking his boomerang for a spin in Skeleton Boomerang.

Skeleton Boomerang is clearly inspired by 2D platforming action adventure games of yesteryear. Its pixel artwork doesn’t seem that far removed from what you might have seen on the SNES or Genesis platforms. The concept of protagonist with a boomerang weapon also feels charmingly unique. Fortunately, using a boomerang in the game provides a different sort of play style than what you’d get if Hunter wielded a sword or axe. As is expected of boomerangs, after flinging it out it wraps around to fly back at you. Unlike actual real life boomerangs however, there’s little chance that the thing will fail to make a safe return to your hand. That’s just what happens when you own a magical boomerang!

The thing that takes a bit of practice to get a handle on is just how lively the boomerang honestly is. For example, if you fling it to the side while standing still then it travels on a rather obvious horizontal path. However, throwing it at an angle while running and jumping across ledges yields a far less obvious path for the boomerang to travel. Not only must it reach its furthest point in the initial direction, but it must then track and navigate back toward Hunter’s hand. At times the boomerang ends up spinning around you rather than coming back in due to the player’s continued movement. This unpredictability can be annoying at times. On the other hand, it can totally save your butt when a skeleton pops up right in its path. 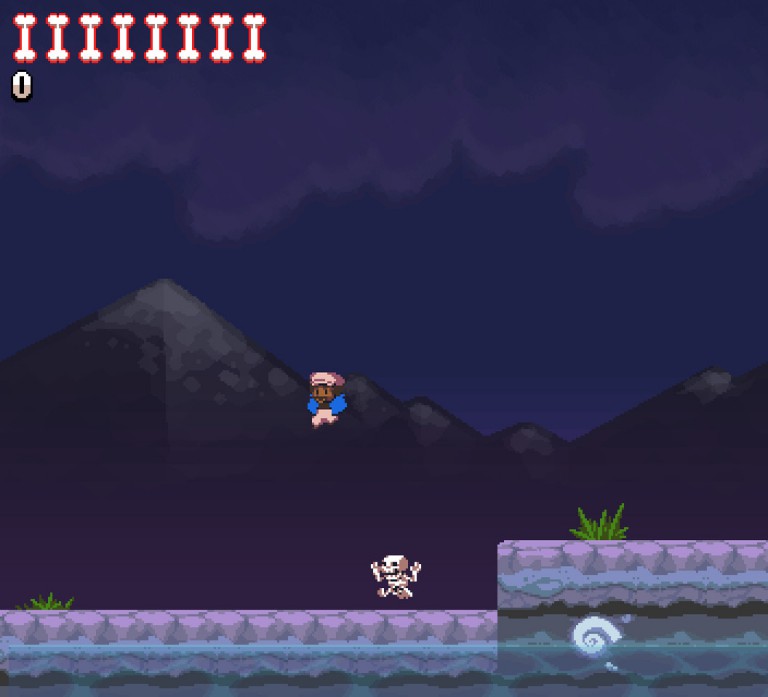 Fortunately, there are a variety of different boomerang types and abilities to suit a great deal of Skeleton Boomerang players. Abilities imbue your boomerang with skills such as a quick-return or the ability to hover completely still for a few seconds. Each ability drains a meter (which fortunately doesn’t take too long to fill back up). These augmented boomerangs add a bit of complexity, but the multiple boomerang types are far more interesting. Some may end up sticking mostly with the default because it’s highly predictable and simple to use. Others may opt for fancier, trick-based boomerangs such as one which freezes enemies for a short period of time.

Speaking of enemies, it’s honestly surprising how much variation was also provided with regards to their behavior and designs. Yes, regular old human skeletons are expected in a game featuring the undead. And sure, a tyrannosaurus rex skeleton as a boss might not be too unpredictable. However, chances are players won’t be prepared to see things like tiny organ grinder monkeys (still wearing their cute little outfits) or skeletal spiders coming at them. Bosses also feature fun designs and sometimes feel pulled straight from classic cartoons. 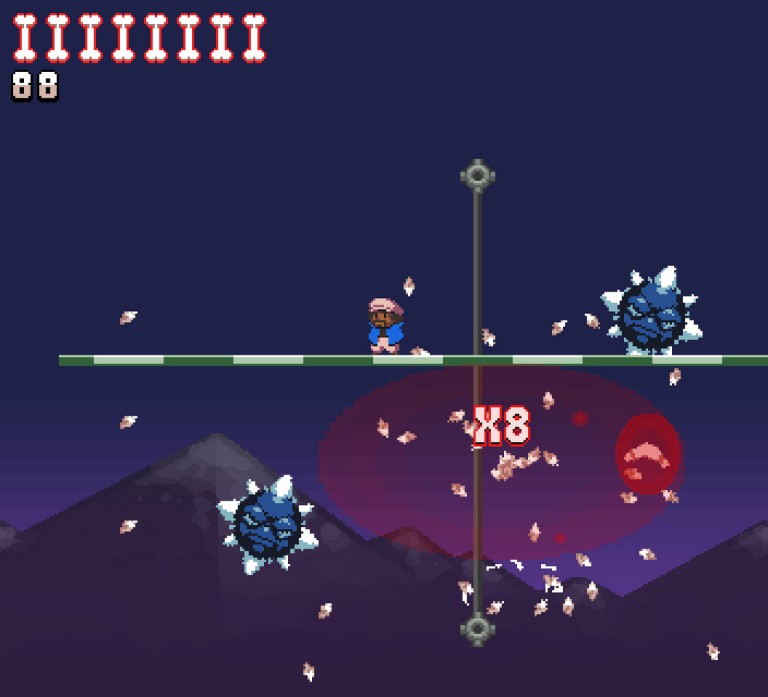 Action-based platformers can quickly drag on if each level plays out the same way. Skeleton Boomerang offers stages with highly different “gimmicks” each time. For example, one level might be focused on jumping on precarious, moving platforms. Another may require heavy dodging of underwater barriers and bombs. Expect to see tropes such as slippery ice platforms – but fortunately you don’t need to worry about breathing underwater. One strange misstep in design is that the game is presented in a small square screen. While this may be closer to classic games and their 4:3 resolution, it ends up feeling claustrophobic. There were one too many occasions where it seemed impossible to prepare for an enemy suddenly barging in. Instances like these end up requiring a bit of memorization for future attempts.

Although it seems small at first, it doesn’t take long to realize that Skeleton Boomerang is actually a fairly expansive game with dozens of levels (and secrets). The same level of attention given to enemies isn’t given to stage visuals. Many look rather ho-hum, which is unfortunate. Levels and bosses are gated by collectible items found within stages. While stages begin as fairly routine, they also feature multiple paths to lead toward these items. The progression is pretty tough though in that it requires you to fully complete even your most hated levels to pass through later gates. At least you’ve got the cute protagonist Hunter on your side as well as an enjoyable, if short, soundtrack to maintain a good mood even after your umpteenth death. 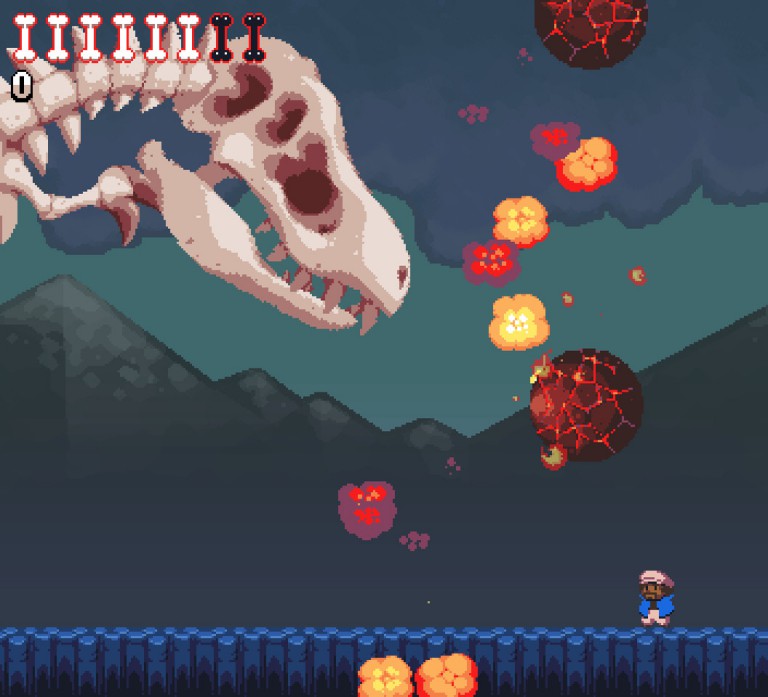 Skeleton Boomerang is a challenging 2D platformer with a lovely variety of levels, weapon variations and goofy enemies to battle against. There are times when design decisions negatively impact play, such as the choice to work with a cramped square screen resolution in the widescreen era. There are a few glitches as well, though nothing that likely can’t be ironed out with a patch or two. With that out of the way, you’re left with a charming — and tough — game with an awesome weapon to use in Hunter’s quest against evil.