Pokémon Sun and Moon changed the way we view Pokémon and made trainers think of new strategies for battles. Whether in the video games or trading cards, they came with Alolan forms of classic Pokémon as well as Z-Moves to change the tides of battle. Because of it being the latest entry of the series, a brand new set of products have come out to promote it. This time we got to look at the Burning Shadows expansion for the Pokémon Trading Card Game courtesy of TriplePoint and the Pokémon Company.

The Burning Shadows storyline features trainers and Pokémon taking on all challenges in the brightness of day and darkness of night. There are powerful legendary and mythical Pokémon to join sides as well such as Necrozma and Marshadow. The set features over 140 new cards with GX versions, items, people and more. Different attacks, abilities and techniques are bound to pop up. So, let’s take a look at some of the cards you can expect.

We receive a Luminous Frost deck which features Alolan Nintetales as its mascot and the Rock Steady deck which has Midday Form Lycanroc on the cover. Both are beautifully depicted in such regal and dynamic poses. There is embossed detailing and glittering backgrounds that fans are sure to appreciate. A few Pokémon are the same within both as well as a couple of Trainer cards but that’s about where the differences end. 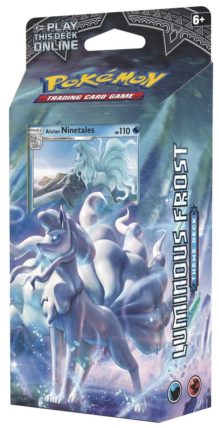 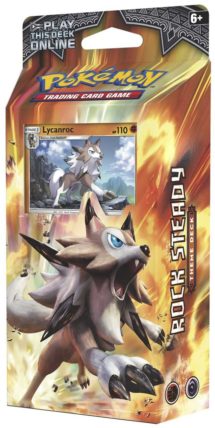 Inside the Luminous Frost pack are a mixture of different types. Ice, Water and Fire-types make up most of the team. Alolan Ninetales is definitely a must-have for many decks as its ability is going to save you from a number of opponents. Luminous Barrier can prevent effects and damage from opposing GX and EX Pokémon to Ninetales. If you’re facing someone that only has a GX or EX left on their team it could end up being a one-sided victory! But that all depends on what they have anyway. However, Ninetales comes with 110 HP and can already inflict 80 damage which isn’t too shabby. Another helpful Pokémon in this deck is Seadra because of its Water Arrow attack. This move hits for 30 damage regardless of weakness and only costs one energy card. Using it two or three times can take down a majority of enemies. There is a Lana Trainer card which can heal 50 HP to any of your Pokémon holding a Water Energy, so having a themed deck such as this makes it a good substitute for potions running low. There are lots of great cards in Luminous Frost that could be mixed and matched to build your own deck.

Rock Steady mainly consists of Fighting and Psychic energy Pokémon. It has the Midday Lycanroc as its featured card and is a pretty average battler with 110 HP and capable of dealing 100 damage with a simple attack at barely any cost. However, its top choice is Lucario which has the Stance ability allowing it to receive zero damage when evolving during the turn. This counts against any and all moves as well as effects until after your turn. It can even land a whopping 120 damage using Submarine Blow which is enough to take down even the most fierce competitors. Meowstic is probably a good Pokémon to use early as you will be able to draw three cards for your hand by using just one Psychic Energy. However, evolving it from Espurr may take some time so let’s hope you get lucky. The Brooklet Hill Trainer card allows you to search the entire deck for a Water or Fighting energy that can be placed on a benched Pokémon. This is useful in helping set-up your next Pokémon for battle. And because it is part of the Rock Steady deck, it should be simple locating an energy you need. There is a strong amount of Fighting energy Pokémon here but not so many Psychics, so keep that in mind when heading into battle. 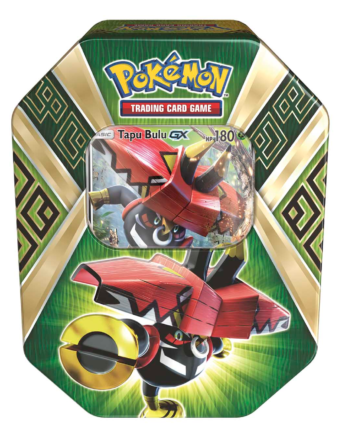 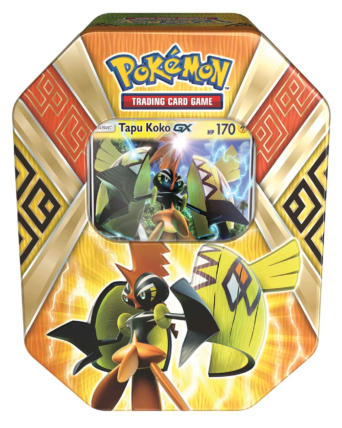 In addition to the Burning Shadows decks we also got to check out two tins from the Island Guardians series. Tapu Bulu and Tapu Koko have their own containers fully decked out in Alolan fashion and embossed with their images. They are handy items for fans to have and contain a few booster packs to enjoy. Each tin features a single promo card featuring a one-time only attack. The Tapu Bulu-GX card has 180 HP which is quite beefy. Its first attack requires only one Grass Energy and deals 30 damage and that could be enough if you’re taking on weaker opponents. Then, adding another Grass and any other Energy, it can destroy with 120 damage but if you opt to remove the Energy cards it’ll deliver an additional 60 for a total of 180! But that’s not all, Tapu Bulu’s GX attack will absolutely annihilate with 150 damage and heal all its HP at the same time. The Tapu Koko GX card isn’t as useful right out the gate but still packs a wallop. It has 170 HP and has the Aero Trail ability allowing it to have Electric Energy cards from your other Pokémon once placed on the bench. If you do so it will automatically swap out with your active Pokémon for a free switch. It can easily deliver 130 damage using just three Energy which is a huge amount at little cost. The GX attack is brutal as it will hit with an average 50 damage multiplied by the amount of Energy cards on all your opponents Pokémon which could get up to like 500! It is one to use when desperate but chances are you won’t have to go that high.

With any new set there is a lot to learn and study. All of the items come with download codes to use with Pokémon TCG Online which is a great way to practice with your decks before taking on tournaments. Based on what we’ve seen, there are decent to great cards to be had with the Luminous Frost and Rock Steady packs. The tins are perfect for collectors and easily used to transport Pokémon goodies. All of the above mentioned products are available for purchase now at many retail locations. Find them now to continue battling with a fiery passion!