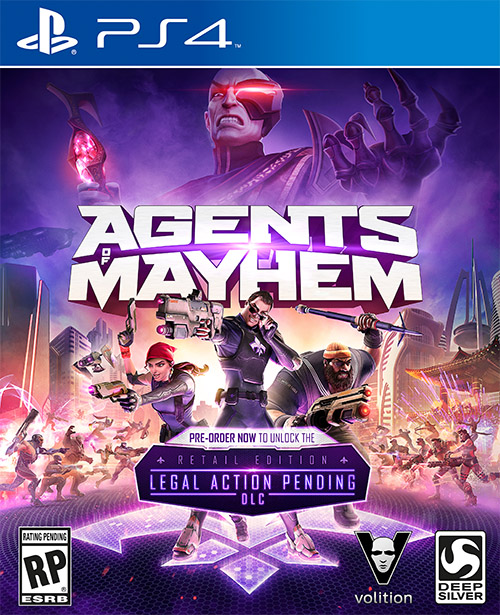 Saints Row is a rare franchise within the games industry. Volition’s crown jewel stands out in a sea of AAA titles thanks to its focus on comedy, over-the-top antics, and parody of the industry’s most serious games. When it wrapped up with Gat out of Hell, Volition shifted development to focus on a spin-off rather than a direct sequel. A third-person shooter with a team element, Agents of Mayhem keeps the comedic roots of its predecessor while trying to forge its own identity. Is Agents of Mayhem a fresh new face on the block, or are these more like the Agents of Meh-hem?

Agents of Mayhem follows the ‘Recreate Earth’ ending of Saints Row: Gat out of Hell where Gat was successful in recreating the planet, leading to the rise of the supervillain organization, Legion (League of Evil Gentlemen Intent on Obliterating Nations). In response to Legion’s threat, Persephone Brimstone has created Mayhem (Multinational AgencyY Hunting Evil Masterminds) to fight back and defeat Legion’s leader, Dr. Babylon. Mayhem tracks Babylon to Seoul, South Korea, where he is intent on harvesting as much Dark Matter as possible for his insidious plan. The story within Agents of Mayhem’s is a slow burn. The first two chapters are mostly filler with players given the more boring agents to start out with and going up against the least interesting villain. However, once Chapter 3 kicks in, the story kicks into high-gear. This also marks the point where the player can begin unlocking more interesting characters. With their own stories that are, often, humorous, character specific missions are a real highlight of the campaign. One mission has players relive a night of drunken adventures, and another has a tough-as-nails USMC officer track down her pupils all while quarreling with her lover over the comms. With twelve playable agents, there’s plenty of hilarious back stories to wade through. Filled with the same style of comedy and parody that defined the Saints Row franchise, Agents of Mayhem is capable of eliciting laughs with its bizarre scenarios.

Unfortunately, the story makes quite a shift in tone in the later parts of the game. While not overly serious, much of the game’s humor is thrown out. The agents may not stop joking, but the gameplay scenarios players are put in aren’t as funny. The game also just abruptly ends in an unsatisfying manner to set things up for a sequel. There’s still a lot to love about the story, but the ending is an incredible disappointment. 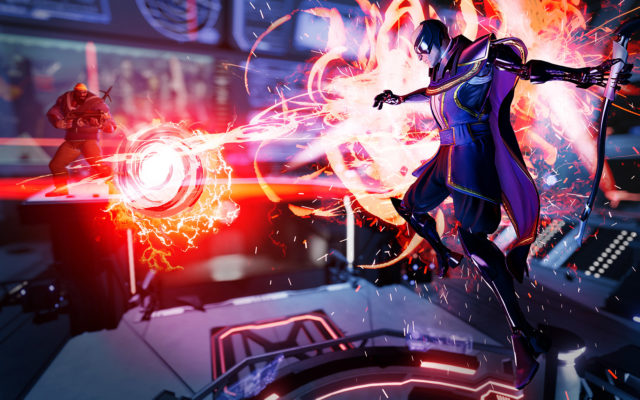 Much like Saints Row, Agents of Mayhem is a third-person shooter, but with a twist. Mayhem is focused on building a three-person team of unique agents and swapping them in-and-out of battle at will. Building a team capable of handling the challenges of the missions is of utmost importance as the game will throw various enemies at you. Some agents can easily break through shields, others deal extra damage against the bigger enemies, and there are even characters that can bypass hacking with a button press. There’s a lot of experimentation, and each agent earns a second specialty when reaching level ten.

You’d be forgiven for thinking Agents of Mayhem is a co-op game and that two additional players could hop into the remaining two agents. Unfortunately, Mayhem is a strictly solo experience. It’s a huge shame considering that the game is perfect for co-op antics. Especially disappointing is that previous Saints Row games did have co-op, with the game featuring slight differences when accommodating for a second player.

The twelve agents are the stars of the game, each has their own unique set of weapons, specialties, and Mayhem abilities. There are agents, like Daisy and Red Card, who are focused heavily on delivering as much firepower as possible, and then there are agents such as Rama and Oni who are focused on debuffing enemies. It’s genuinely fun to play with all the agents, and having the ability to swap between your selected three at any time adds a layer of strategy when in hectic battles, which is generally all the time. What isn’t so great is that players can’t swap out their three selected agents for other agents so easily. To do this, players will need to warp back up to the Ark, the game’s central hub, edit their squad and then redeploy. It’s a tedious process for those who want to try out different character combos. 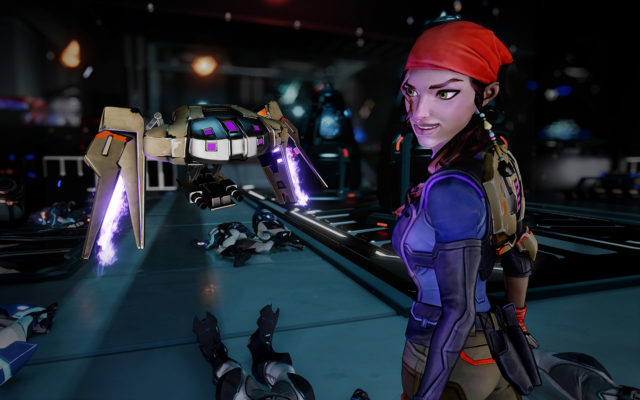 Adding a wrinkle to the gameplay is Gremlin Tech. Through exploring the world and opening random chests found throughout Seoul, players will find pieces of Tech that can then be used by the game’s tech genius, Gremlin, to build some fascinating stuff. Status Effect Gremlin Tech give agents status boosts to help them survive combat while Non-Status Effect Gremlin Tech gives players abilities to create additional mayhem. For example, the Lightning Strike tech brings several lightning strikes crashing down on the desired area. While Gremlin Tech may seem like overkill on easier difficulties, it becomes a necessity when the difficulty is ratcheted up.

Agents of Mayhem also features quite a bit of driving and traversal. Getting around Seoul is fine, but mostly it’s busywork. Unlike Steelport, Seoul is a generic open-world city with very few memorable locations. Volition doesn’t give players fun tools to race around the world, or even fun side activities to participate in. Gone are creative modes such as Insurance Fraud and Professor Genki’s Super Ethical Reality Climax, and in their stead are tasks where you can follow targets, kill patrolling Legion enemies, and destroy supply trucks. There’s also the repetitive Legion Occupation missions that require you to capture bases, destroy machines, or destroy golems repeatedly. It’s all typical open-world stuff, and sadly, if you want to collect all the various character and weapon skins, you’re going to have to participate in these mundane activities.

Even more mundane and repetitive are the game’s Lairs. Players will frequently fight in Legion underground, secret lairs, which contain essentially copy and pasted rooms where it’s possible to see the same area multiple times in a single occurrence. With the same aesthetics and layouts, Lairs are the weakest points of Agents of Mayhem. 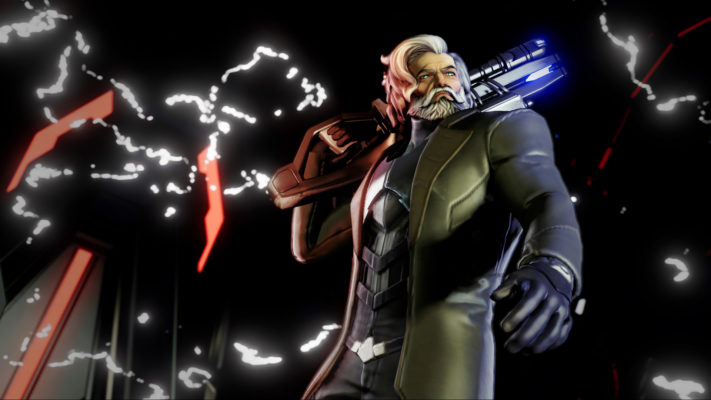 Thankfully, the main story missions and the character missions are enough to break the monotony of Mayhem’s side content. Fighting villains like August Gaunt and Aisha is hilarious, and learning more about the twelve agents is truly worthwhile. There is endless amounts of fun to be had by participating in these missions. It’s just unfortunate that the same attention wasn’t given to the remainder of the game’s activities.

In terms of the presentation values, Agents of Mayhem nails the ‘80s cartoon vibe it’s going for. From the ‘More you Know’ loading screens, to the Saturday morning cartoon look, and to the GI Joe vs. Cobra inspired set-up, Volition has crafted a beautiful homage. A lot of praise also must go to the writers and voice actors as the dialogue is hilarious, and the performances bring that hilarity to life perfectly.

What isn’t so rosy about the presentation, though, are the number of performance issues that bring down the otherwise quality presentation. At least on PlayStation 4, the framerate drops frequently, pop-in is visibly noticeable, and there are several weird issues to find throughout the game. One frequent issue involves delayed dialogue from going from Point A to Point B during a mission. Players will be driving, and one character will spout some dialogue and then stop, and then a little later down the road, the next character will say their piece. It’s quite jarring, and it’s likely that Agents of Mayhem could have used some more time for polishing. This is a game that nails the look but hurts from a lack of polish.

We’re living in a post-Saints Row world where Volition wants to bring players something new, but familiar to the table, and for the most part, Agents of Mayhem fills that void. It retains Saints Row’s sense of humor and mayhem all while adding in team-oriented gameplay. It’s the agents and their individual stories that steal the show thanks to snappy writing, bizarre scenarios, and perfect comedic timing. The story itself is a highlight thanks to the insane villains, although it takes a few chapters before things pick up. It’s disappointing that the remaining activities are so repetitive and lack the imagination of what Volition is known for, and with a myriad of technical issues, it feels like Agents of Mayhem was shoved out the door earlier than it should have. Still, despite a few hiccups, there are still hours of fun to be had with Agents of Mayhem. It may not be the best open-world game out there, but like its predecessors, it stands out in a sea of AAA titles that take themselves far too seriously.