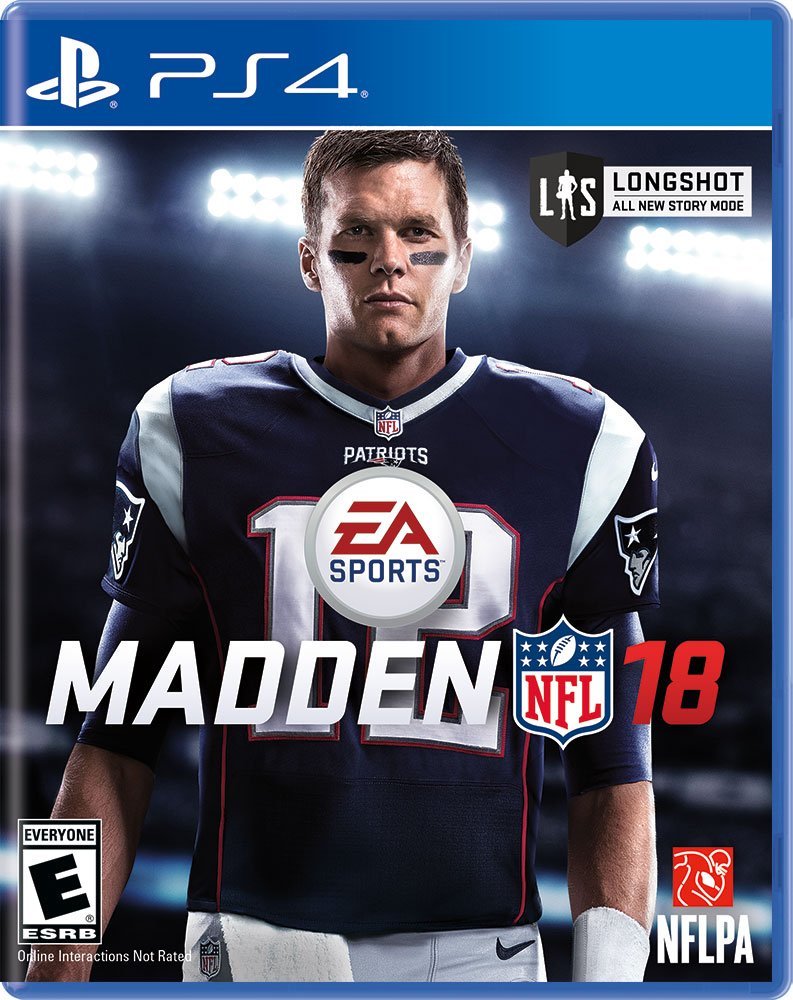 It’s August. Kids are returning to school, people are sweating and pre-season football is underway. This also means that Madden is releasing. EA Tiburon has promised a wide array of changes for Madden NFL 18. Most notably is the inclusion of the famous Frostbite Engine. The graphical engine that powers the likes of Battlefield 1, Titanfall and Rory McIllroy’s PGA Tour, this opens up the possibilities for a football franchise that has a constant demand for change. Add to this the inclusion of a narrative story and Madden NFL 18 may be the biggest leap forward in the franchise since going to 3D in 1999.

What are the results of the Frostbite Engine in Madden NFL 18? Really quite pleasant. Visually, you will see the best visual representation of the franchise. Faces look incredibly realistic and the player models are detailed. The lighting it what shines the most. Lighting in the stadiums looks phenomenal as the time of day becomes important due to the shadows that are cast on the field. Animations are fluid and tackles look intense. More importantly, the PS4 Pro version runs at 4K resolution and 60 FPS. This is also the tightest version of Madden to date. The interactions on the field feel natural and responsive. There really isn’t a floating feel to the game like it has felt like in years past. The battles on the offensive line feel true and the blocking has been improved. It doesn’t feel like any corners have been cut in terms of physical interactions and I have yet to feel cheated on a play. It feels genuine when a defender beats a blocker.

One potential huge tool that has been added is manual passing. By holding L2/LT, players can aim where to put the ball with the left stick. Couple this with the type of throw the player can make and the type of catch that can be made and it may be the most authentic passing interface to date. There is, however, a large learning curve to using the manual passing. Normally, Madden will offer tutorials on its new features, but the manual passing does not have it. Thanks to an open practice mode, this is something that can be perfected. On top of having to hold the left trigger button, the receiver must be selected and the indicator guided with the left stick. This can leave the Quarterback hanging. Having it mapped to the right stick and being able to maneuver in the pocket would have been a better option. Still, this could easily be something that the best players can master and dominate with. 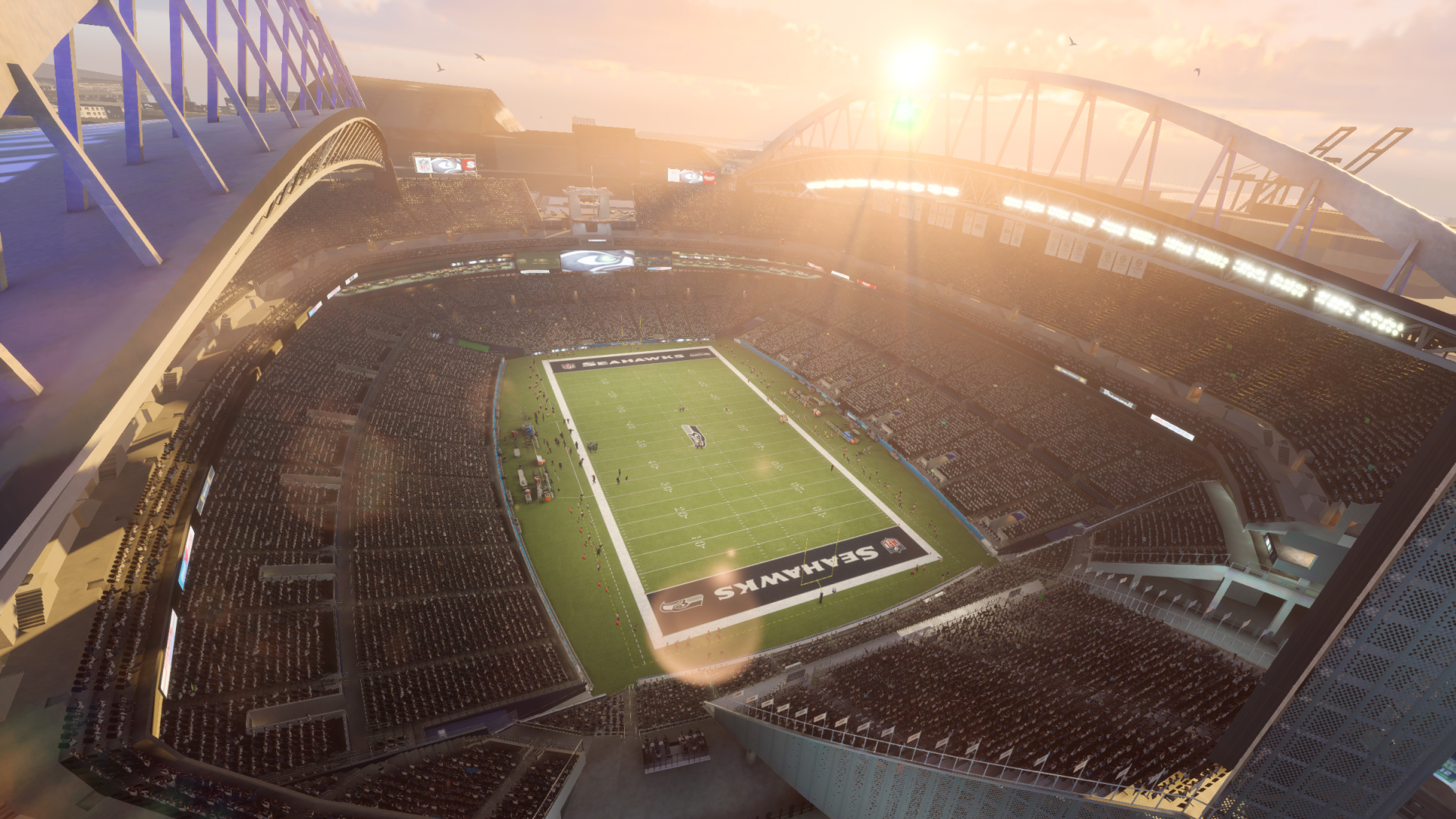 While the inclusion of Frostbite seems to be a success overall, it’s not without its setbacks. Thankfully, the folks at EA Tiburon have done a great job of patching Madden over the past few years. You will come across some animations that are bizarre, but not frequent. The biggest nagging element are the ball physics. If a pass gets tipped, it does a couple of things and takes away from the authenticity. Balls have bounced around groups of defenders across the field. Also, there were balls that were tipped and then bounce extremely high in the air. These are all things that can be refined, but the core element of the game is largely improved. Even running the ball works well especially with being able to identify the Mike. This is selecting the middle linebacker in the defense so blocking schemes can change. There are a good bit of pre-play options to choose on the fly.

Franchise Mode is the bulk of the single player campaign. While it hasn’t been overhauled, there have been a good bit of elements added for micro-managing your team. Again, players will begin the season by choosing player, coach or owner. Practice Squads have been added to the series for the first time, as this is something fans have been clamoring for for quite a while. The menu interface seems less cluttered and refined, while upgrading players’ XP. Weekly training hasn’t been simplified, but it’s easier to navigate. Players can also change coaching strategies on-the-fly, something taken out of NCAA’s playbook. Selecting positions players to play balanced, conservative or aggressive, is something that the series has needed for some time. Franchise also features Play Now Live. This allows for keeping up with the season with updated commentary, storylines and statistics. Currently, only the first week of the pre-season is available for this, but by the time the game launches, the second week should be available. This is a nice touch to have for people who might step away from their franchise for a few weeks and wish certain players had higher or lower ratings. 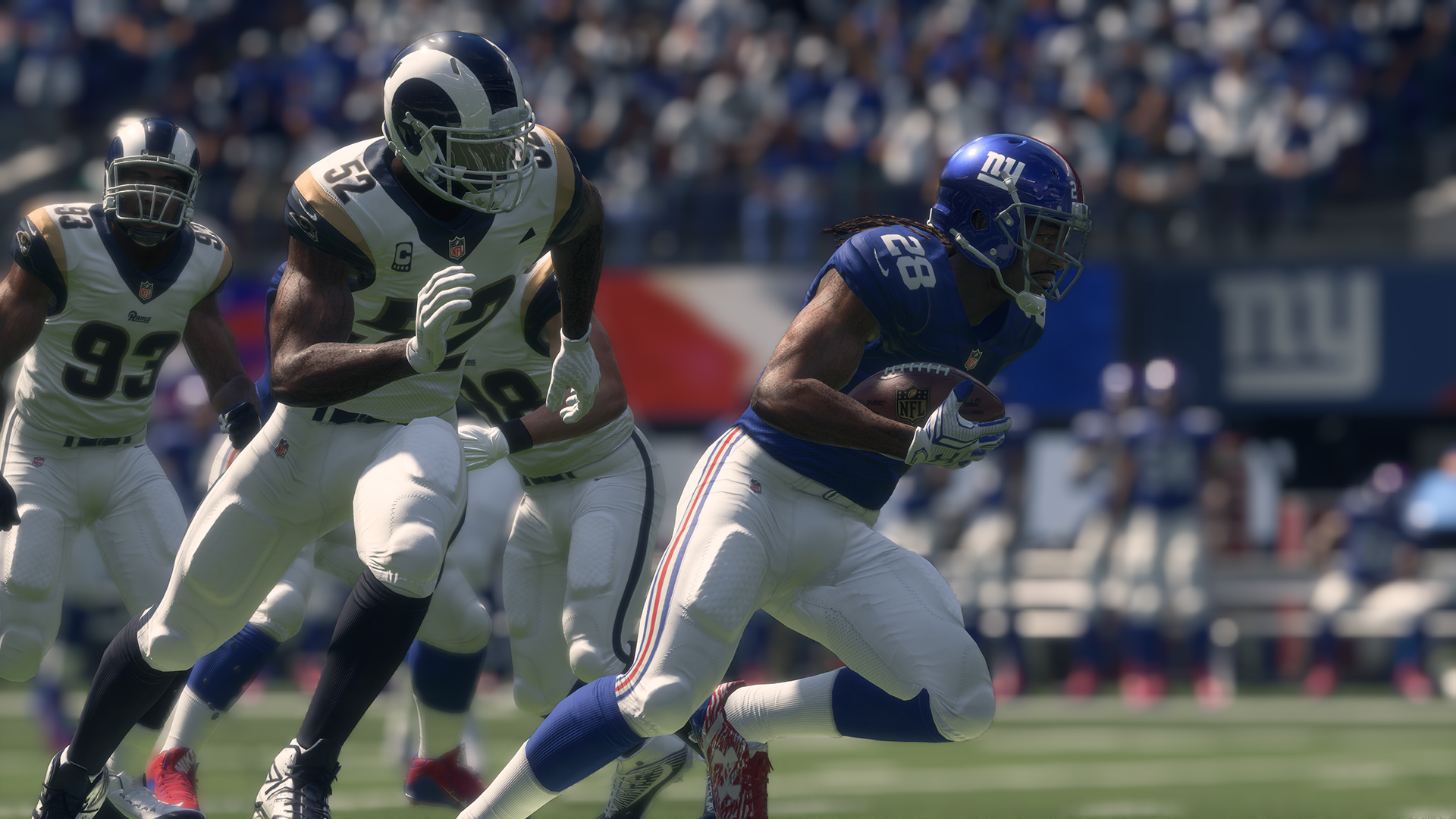 EA Tiburon has added a slew of playing options. There are three choices: Arcade, Simulation or Competitive. Arcade is wide-open gameplay, while Simulation will realistically mimic a football game. Competitive is for online play and is geared more towards e-sports. On top of this, players can play key moments in their franchise to speed the games up. In doing this, it saved a little bit of time, but it takes away from the feeling of the game. The point is there are many different ways to play Madden NFL 18 to cater to any player.

Including a narrative in a sports game is uncharted territory for EA, but Madden NFL 18 has a story mode. Longshot is its name and it stars a young player named Devin Wade. Wade is a Quarterback who quit playing quarterback at the University of Texas due to the death of his father. His best friend, Colt Cruise, is along for the ride the entire time. The story is predictable, but not bad. It’s well executed, but it seems like something you’ve seen in other movies or shows before. Strangely, the story involves a reality television show with the same premise as the actual story. More strange is that EA is almost poking at a studio to either pick up doing a movie they write or doing that reality show (which is a good premise). As for Devin’s character, he lacks emotion. Literally every other character seems to show range, but Devin seems lifeless and lost at times. The story incorporates gameplay with varying quicktime mechanics involving either making throws or making conservative decisions. On top of this, players will play as Devin during comebacks at different points of his life. All of this build stats and affect the potential draft stock of Devin. Longshot was enjoyable, but the big question is does it belong in the game? This is something worth spending $15-$20 on outside of the game when something else could have gone in its place. 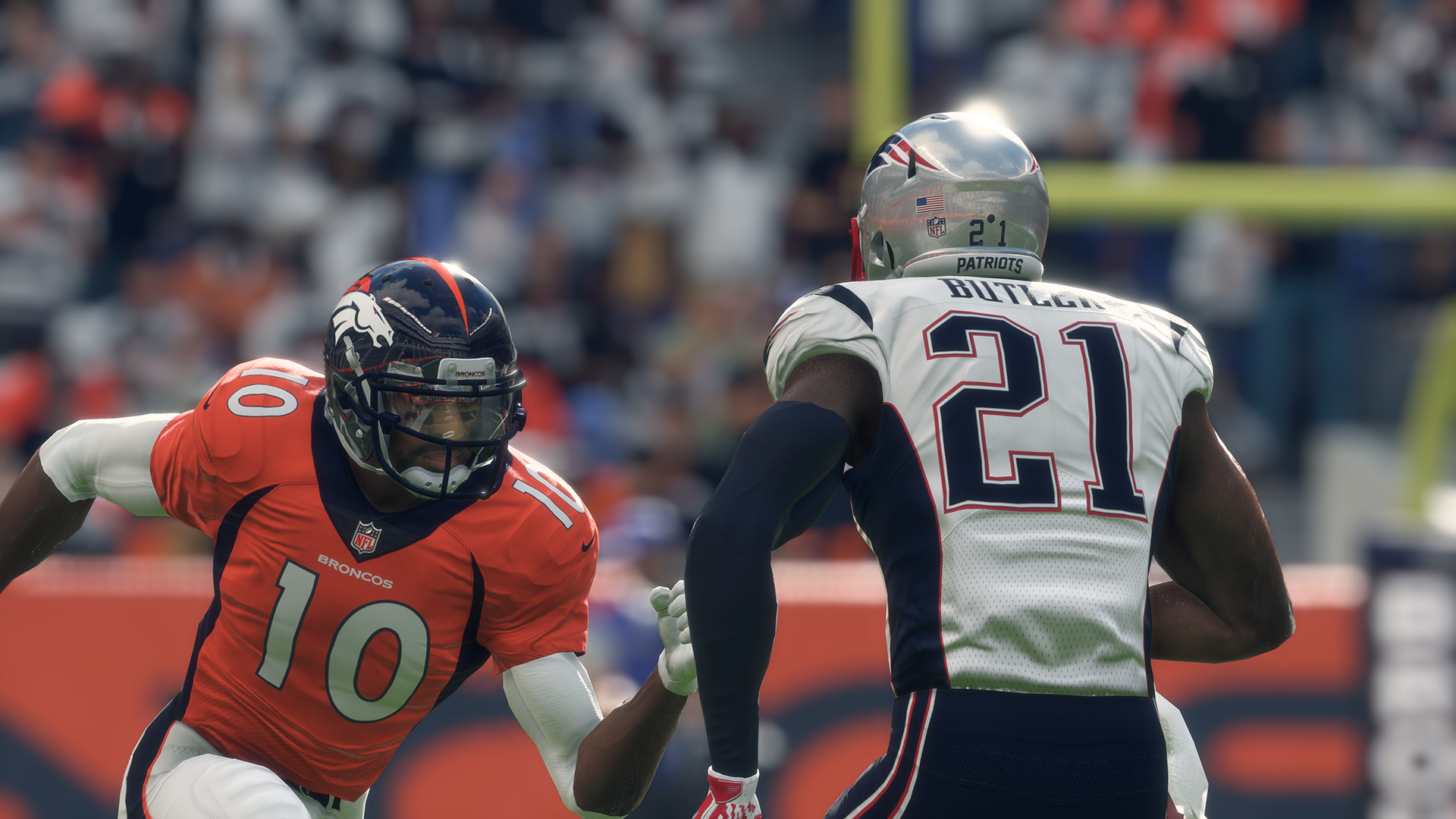 EA still wants you to play Ultimate Team. Thanks to MLB The Show’s Diamond Dynasty, these modes are finally growing on me. Last year’s great addition, Draft Champions, has been moved into the Ultimate Team with MUT Draft. The most important addition is 3-on-3 online play. Known as MUT Squads, players will combine their card stock to form a team. One player will offer offensive captains, the other defensive captains and the other will be the head coach. All will play at the same time on the field with each captain commanding their respective side of the ball and making pre-play decisions. Playing with the developers, this ended up being extremely fun. If you have a group of people to do this with, it can be truly exciting. Players can also play MUT offline or head-to-head.

There are clear enhancements to the commentary during Franchise Mode. The same team of Brandon Gaudin and Charles Davis return and there never seems to be any dead time during the game. While the commentary will update weekly with Play Live Now, there is a good bit of depth to commentary this year. You will hear related storylines involving players and teams that sound authentic. What doesn’t sound very authentic this year, however, are the collisions. The sound of pads hitting and the ball bouncing around are low quality. While visually the game may be crisp, the sound seems to have taken a step backwards. Lastly, if the Madden soundtrack is normally your thing, it features a strong lineup this year. Otherwise, you will actually find music from the recent NCAA Football games as a choice. 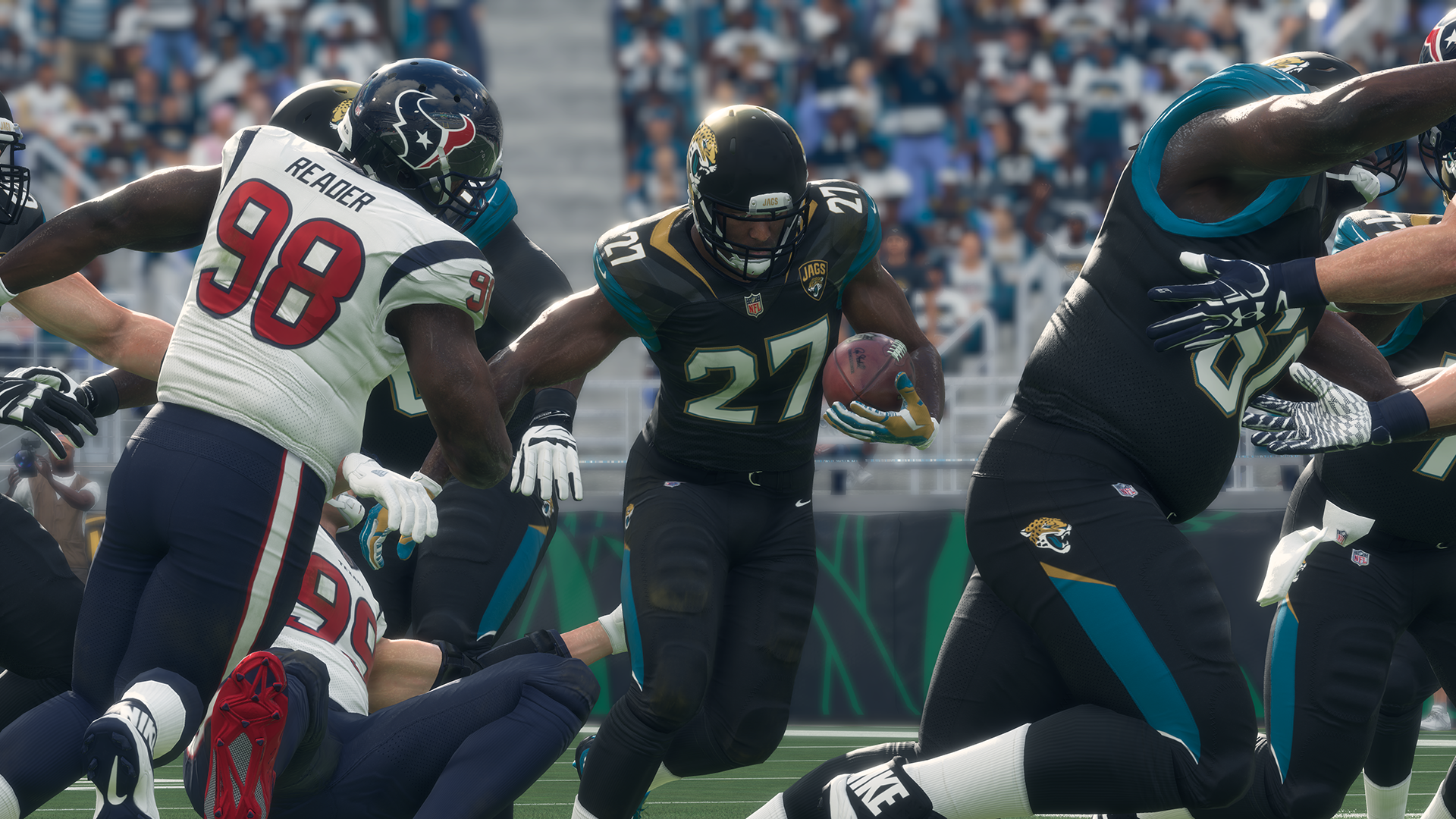 This is possibly the biggest update that a Madden game has ever seen. This is one of those years where the franchise takes a huge turn and it pays off. The tightest and crispest Madden to date, it looks and performs stunningly, all while adding tons of little things to correctly represent the game of football. From an outsider’s perspective, Madden is still going to be Madden. If you are one to rarely pick up the game, this would be the one to get due to its advancements. Longshot is worth trying if the mood suits and MUT Squads is fun if your teams are evenly matched.