The early ’90s were an interesting time in pop culture, with the end of the ’80s excess, but the latest decade just coming into form. The earliest part of the ’90s were effectively a carry over of the late ’80s and with shows like Miami Vice and movies like the Lethal Weapon franchise, flashy cop projects were hot. Dick Tracy as a character wasn’t a huge deal in pop culture per se, but Warren Beatty wanted to make a movie based on the character for over a decade — leading to a surprisingly hit in 1990 when the ’30s detective comic character hit the big screen. This led to all manner of action figures, toys, and of course, a licensed NES game. While LJN dominated the field with hot garbage more often than not, this game was handled by Realtime Associates, with Bandai acting as a publisher.

It was a shockingly ambitious game for the time, managing to mesh both side-scrolling action gameplay with overhead driving and even a bit of out of vehicle exploration if you so desired. Dick Tracy’s role as a detective acted as the crux for everything since you have to build up a case against the game’s criminal lineup to send them to the slammer – and the only way to do that is gather evidence throughout the stages. Each clue tells you where to go, and then you go in your patrol car and roam the streets to find everything. The map layout is fairly logical, with letters and numbers giving you a rough idea of where go. The lower parts of the map correspond to lower letters and numbers – so a B2 area would be towards the lower-left of the overall map, while a high number and letter combination would be on the top-right. 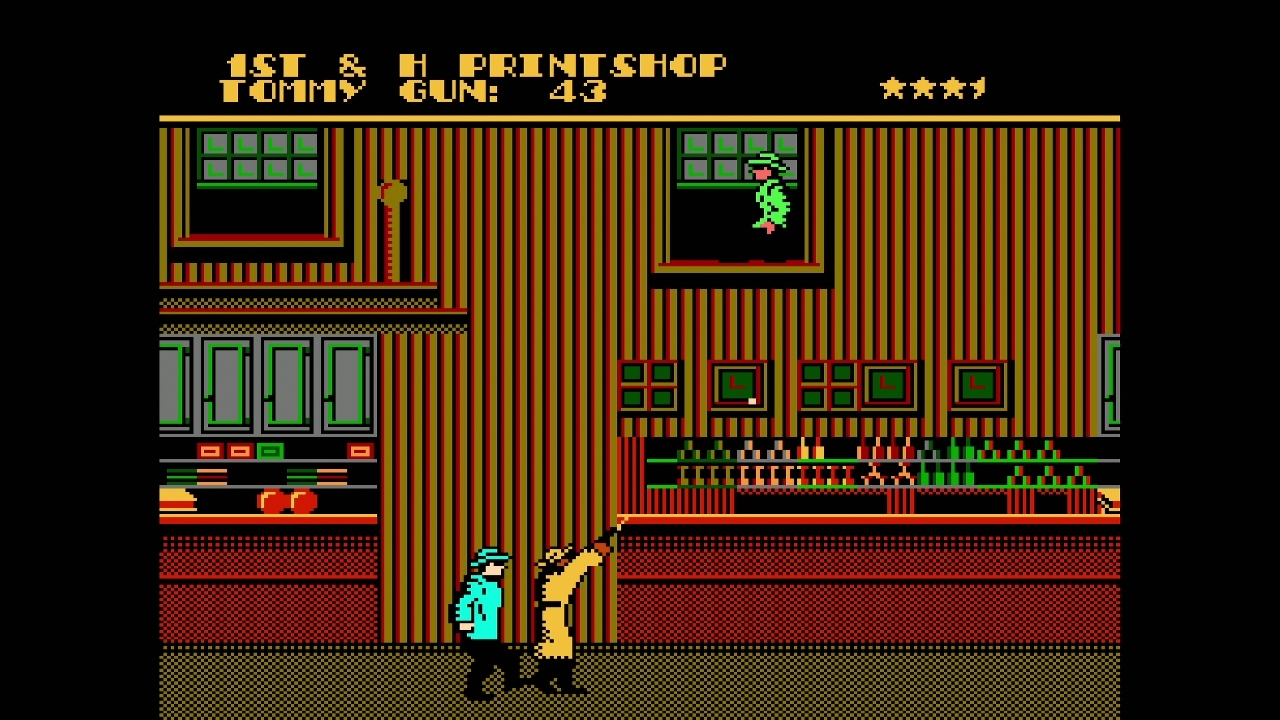 Going from Point A to B on the map would be somewhat boring on its own — so the criminal masterminds have snipers set out to take Dick Tracy out whenever possible. They key to safety with them is to watch where they fire and then simply wait. They only shoot in three directions — straight ahead, to the right diagonally and to the left diagonally. This gives you plenty of lead time to avoid their shots and move into the stage of your choosing. While the game does let you know the stages you have to go to, this can in a sense be viewed as sticking with the main story of an open-world game versus going with side stories. Only here, going outside of the beaten path will just warrant you health pickups, which you will want to grab whenever possible.

Enemies do a fair amount of damage and in a twist, not every person you see in a stage is an enemy. The key is to only attack either animals that attack you or armed gunmen. If someone doesn’t have a weapon in an area, they aren’t going to attack you – so you can move safely past them. Attacking them actually takes health away, so it pays to play it safe and not attack everyone because it makes your trek to the clue easier and allows you to conserve ammo and avoid having your health penalized. Attacking enemies can be done with your handgun, a tommy gun power-up, or you can just use your fists. Going with a gun is more efficient for preserving your health, but fists give you unlimited ammo. You also have a super punch that sends foes flying off-screen with a far more limited use – but as a last-ditch effort, it works in a pinch and gets a chuckle out of you at the same time. 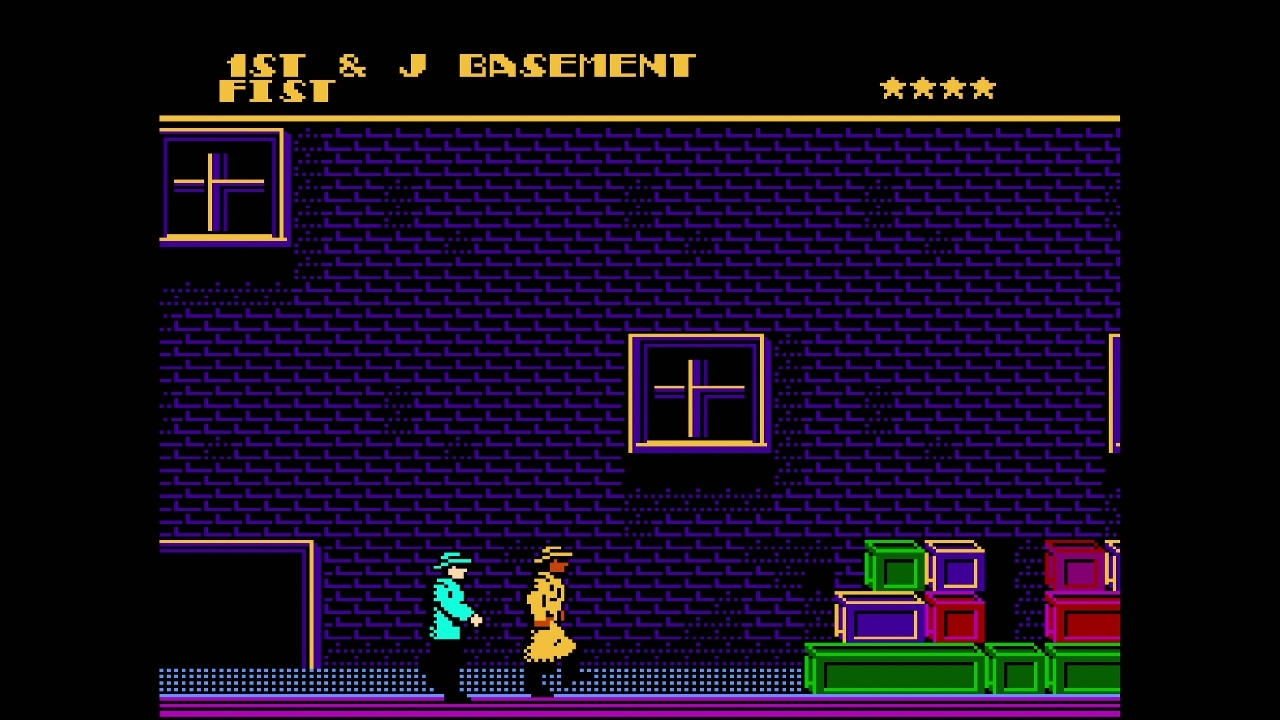 As a game, Dick Tracy has some rough edges, but the overall package is fun to play. Gunplay is satisfying and each weapon does feel different. Your basic handgun gets the job done, while the tommy gun gives you a variety of different angles to work with and allows you to take out enemies who have the high ground or take them out when they’re beneath you. It gives you versatility and allows you mow through enemies when you need to. Health pickups are rare, so you need to be smart with how you play. Being careful isn’t just a key to avoiding damage, but to properly platform as well. Jumping is a bit stiff, and yet despite that, the game remains a lot of fun to play. Punching, driving, and shooting controls all work fairly well.

Visually, the game features bright colors – but limited animation. The stages themselves look diverse enough. Some areas do break the boundaries of logic though – like having a barber shop as big as a warehouse. Enemy designs are a big generic, but you can generally tell bigger foes from the lower-end ones by the color of their jackets. Musically, Dick Tracy has about three songs that play constantly – so you may want to either mute the audio or just learn to love it. Fortunately, the sound effects are much better – with each weapon and attack sounding different, resulting in the tommy gun actually feeling a bit different than the handgun. 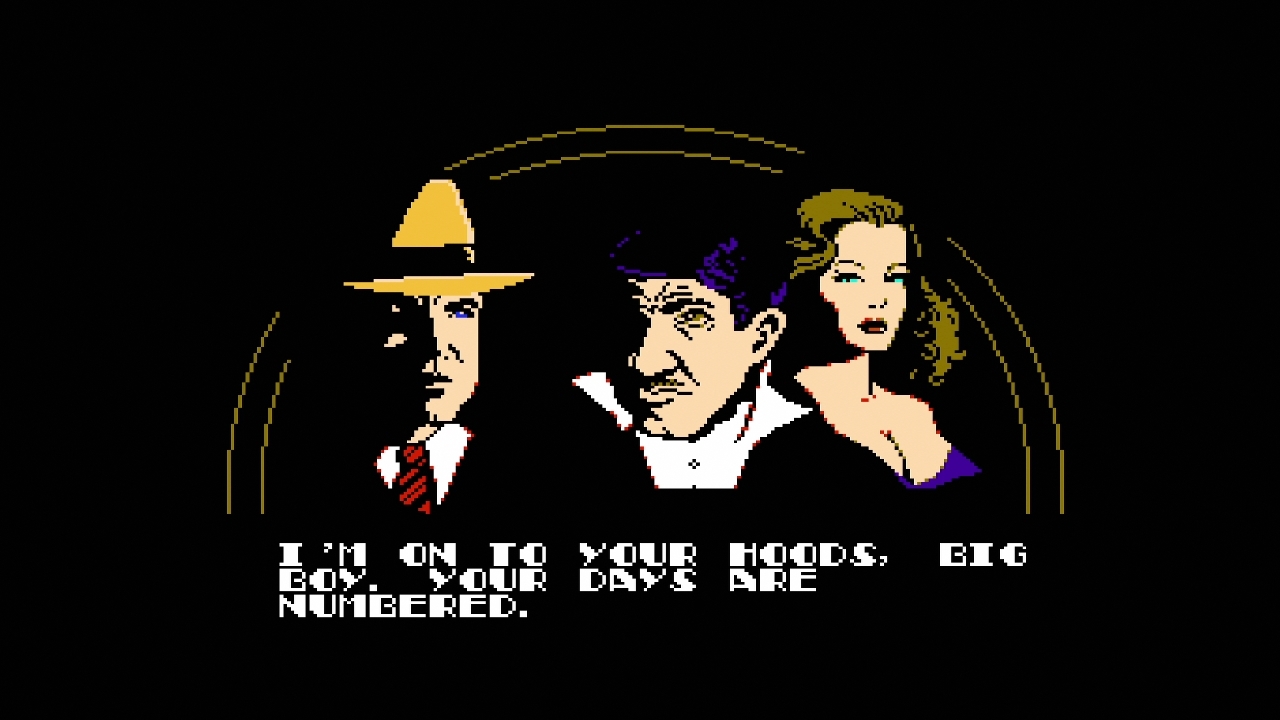 Dick Tracy is a flawed game, with iffy controls and a clunky feeling. Despite its flaws, however, the concept remains fun and enjoyable. In an era of open-world gaming becoming a new norm, this feels like a early rough draft of what early GTAs and games like Crimewave on the Saturn would become. The driving is shockingly well-done for the time and the game doesn’t sell for a ton online now. It may not be the best game on the NES, but it does still have some fun to offer and can be yours for around $5 or so.