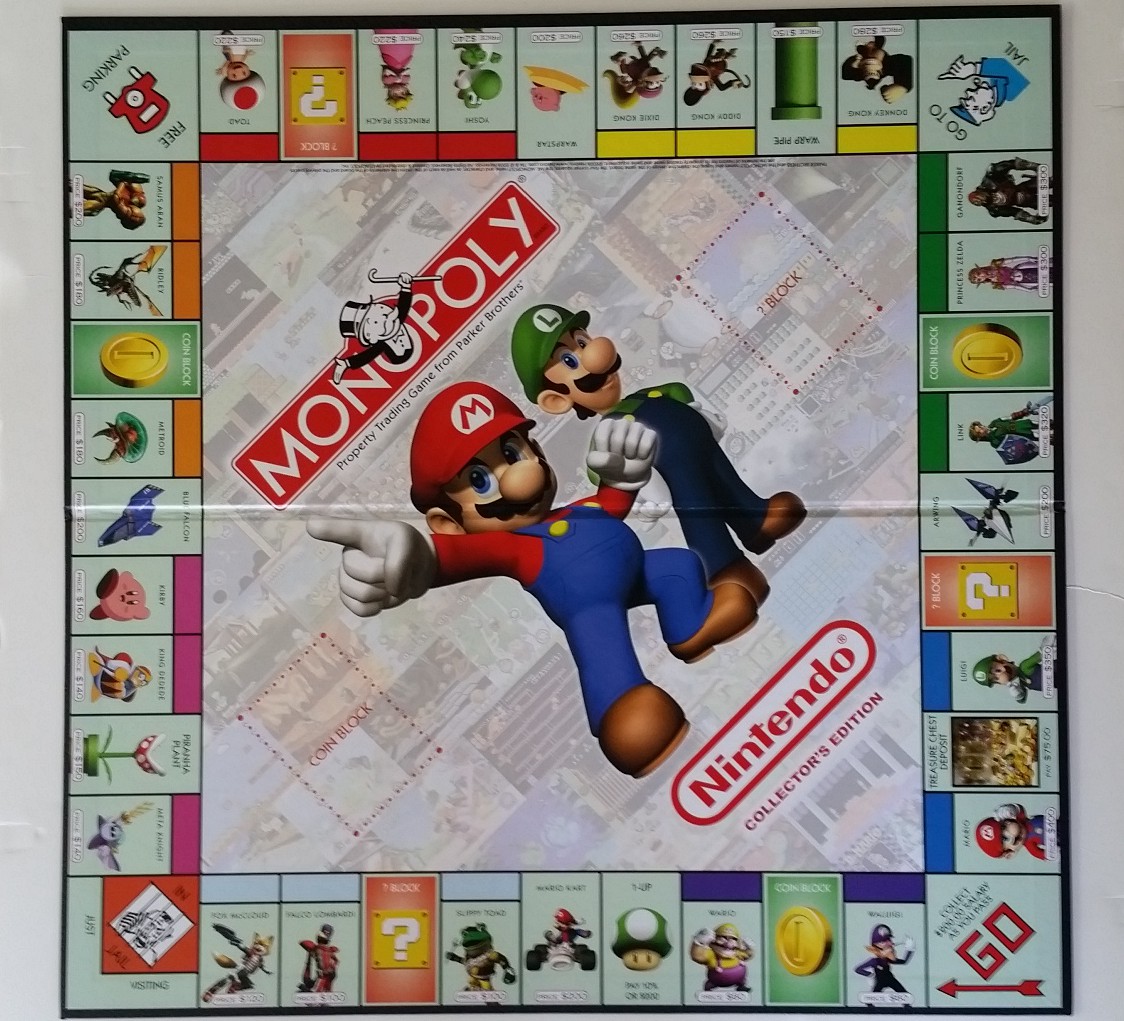 Of all board games out there, most of us have played Monopoly at least once in our lives. It’s thanks to this fame that, out of all board games, it is the one most often reprised with different branding. In fact, there’s an entire company devoted to creating modified editions of Monopoly – USAopoly. They’re the folks who you go to when you’re in dire need of a Star Wars or The Golden Girls-themed edition of a classic title. It was only a matter of time before Nintendo got its chance in the spotlight and the company finally received a (first) version of Monopoly in 2006.

Since then, Hasbro actually created their own rendition of Monopoly as well under the silly name “Monopoly Gamer.” Over the years, USAopoly also re-printed their board game as Monopoly: Nintendo Collector’s Edition multiple times. The latest iteration features a silver box. In any case, the version we’re covering today is USAopoly’s original iteration. This company is an absolute professional when it comes to tweaking board games. 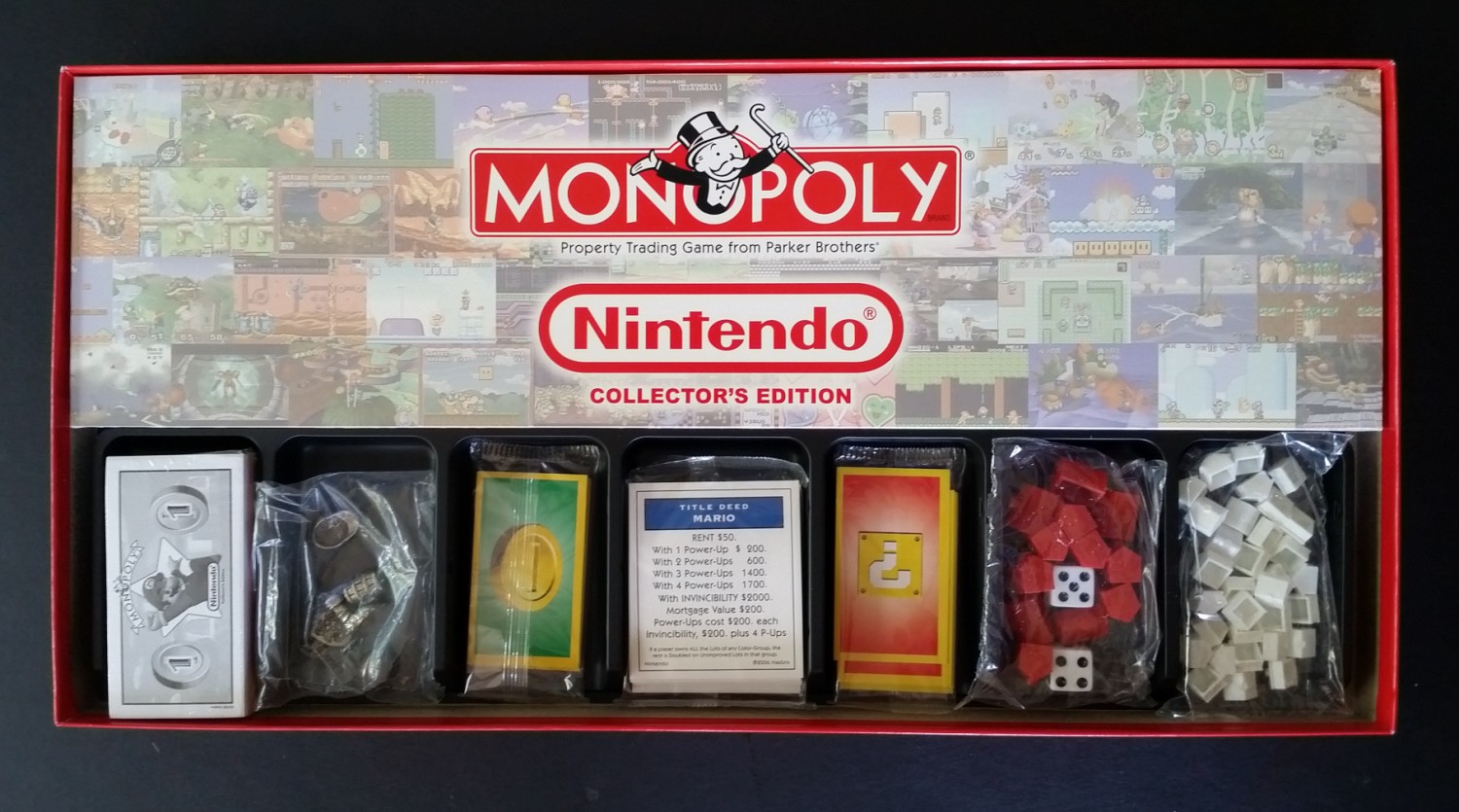 Each and every part of Monopoly has been visually modified to accommodate Nintendo’s characters. From the board itself to the money, cards and more, you’ll have no trouble identifying this as a Nintendo-licensed product. Monopoly would not be Monopoly without player tokens. In the main brand, people obsess over which tokens are active and which are retired. You won’t find a thimble or race car in this set. The designers took the liberty of swapping out standard tokens for ones more meaningful to Nintendo fans – at least that was presumably their goal.

Exclusive tokens include Mario’s cap, a barrel with “DK” on it and boots (presumably Link’s rather than Kuribo’s Shoe) among others. As is probably evident, the tokens don’t quite measure up aside from the cap, shield, and NES controller. There are so many iconic things about Nintendo games and yet this is what we’re presented with. Their more recent edition fixed this issue with tokens featuring a 1-up mushroom, invincibility star and Link’s iconic sword. 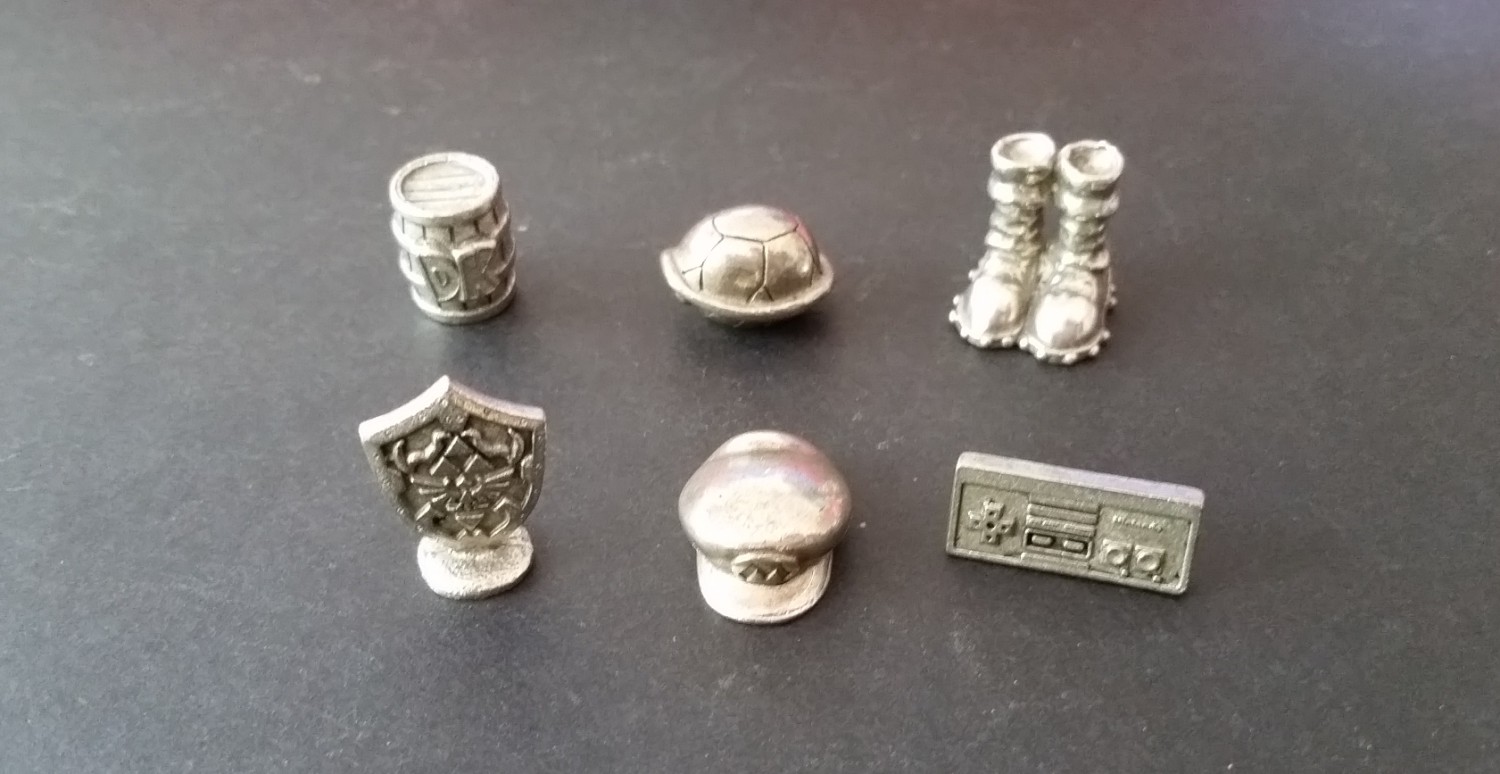 Fortunately, everything else in the package makes up for these passable tokens. All Monopoly money features Mario’s smug mug on it. Cards also come with lovely illustrations and titles (such as referring to Mario Party) to keep up the theme. As far as the board is concerned, it also looks lovely with Nintendo artwork gracing every edge. This is a much better board design than the aforementioned Monopoly Gamer edition. Any Monopoly fan would be able to sit down and play this version – even if they might be a bit confused by all the references.

There are, however, some tweaks the classic Monopoly formula included in this board. These differing rules are explained in a small paper handout included with the package. You don’t have to obey these rules if you want as they are optional. Still, they add some purpose to having purchased a Nintendo-specific version of Monopoly. Speaking of which, sometimes the Nintendo aspect does feel a bit tacked on. For example, title deeds simply list off character names such as Fox McCloud rather than offering cute location-based naming.

Monopoly offshoots are typically only desired by certain types of fans. A video gaming-specific iteration of Monopoly hones in on an even smaller niche. Still, for those who love both Monopoly and Nintendo, each of USAopoly’s offerings is worth seeking out. They provide a fun twist on the classic board game that so many know and love.