Hardcore Gamer recently headed out to Redwood City in sunny California to visit EA HQ and get the latest scoop on the impending Madden NFL 18 launch. This is a big year for the game with it switching to a new engine and adding a story mode and we were able to have an enlightening conversation with the man responsible for the lion’s share of the experience, Creative Director Michael Young. In an extended conversation, Young talks about how the mode came about, the struggle behind getting it made at all and why everything from the story to the soundtrack has meaning.

[Hardcore Gamer] Longshot has been in development for about four years — was it always planned to debut with Madden NFL 18?

[Michael Young] It was not always planned to be part of this Madden. Basically how it worked is that I had a passion for storytelling and pitched way more story modes than this in all different forms and shapes, but this one in particular I’d received a small budget to put together a pitch. I just kept getting to the next level. I had about two years where I was really just developing the story. I think in the second year I had three or four people — the first year was just myself — and I just kept hitting new milestones like “okay, here’s $30,000 more.” Just the fact that I wasn’t working on the regular Madden game was enough for me because it gave time to try and do this crazy thing, but during the first year I was developing the Devin Wade and Colt Cruise characters, doing a lot of research and spending a lot of time with NFL people like Dan Marino, Pete Carrol and Bill Cower and picking their brains to find the story. Then we did a couple of test scenes with Scott Porter and JR Lemon and shopped those around and starting getting momentum. That third year was a lot of gameplay prototypes and a small team of people building it in Frostbyte. I don’t think we could have done it without Frostbyte. Ideally we would have done Longshot last year, but [Frostbyte] ultimately slotted where we would land. 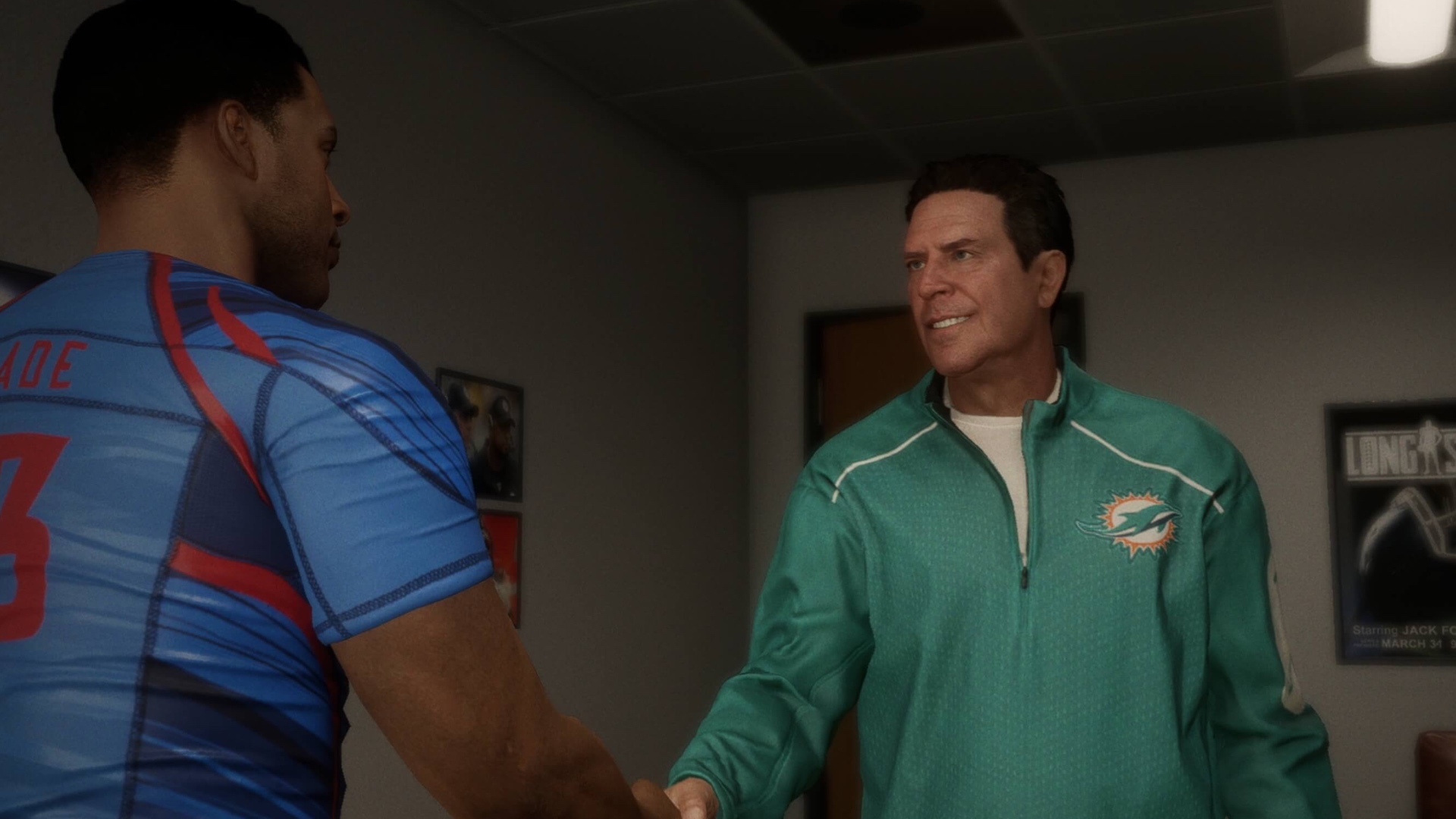 How much has the story evolved since those early days; was how the mode turned out your basic vision from the start?

The basic vision is still there — it’s the same characters and journey. I think what got better the second year was when I brought in Todd Zuniga to co-write it with me and we put in six months of rewrites and some of the characters became more prominent. Originally Bill Cowher was going to be in the game in the place of Jack Ford, but ultimately it served the story better to have his own story and sub-plot and the reason to be on Longshot. It helps justify why you put up with Ross. It made it more interesting that these two guys are finding this new relationship together; that they can only be successful together. If that was Bill Cowher, I don’t think that would have been as good of a story.

We were so fortunate to be able to share the script with BioWare and get feedback on what was working. We were trying to do something original in the vein of Life is Strange and people were excited to help. The first draft had the same heart, but it was just about getting the balancing. In early drafts some people struggled to get on board with Devin, so the flashbacks were added earlier to show you the person you want Devin to be and different scenes were added to justify why he is the way he is. That’s just a natural iteration and if we would have rushed to do a story mode in a year, the story would have been pretty terrible — it definitely wouldn’t has been as good as it is today.

Have you taken influence from some of the more popular graphic adventure games that have emerged during development?

There was a huge inspiration from the Telltale games. If you think about how BioWare had established branching dialogue, it was really a lot about personality. I was inspired by these meaningful choices and the pressure to make a choice and that you’re often picking between the lesser of two evils like “do I hurt my chances with this person or with this person?” “do I help Colt or do I help myself?” We were trying to have non black and white choices where you’re weighing them and you don’t know what the exact right thing to do is. I haven’t been as emotional about any video game as I was at the ending of season two of The Walking Dead. I felt emotional about my choice for weeks. I wanted the choices to be what Devin would be wracking his brain over and they all feel right. So that kind of goes to the movie quality too — we didn’t want it to feel polished, but instead out of nowhere in a different scene. So we put a lot of effort into making those branches feel seamless. 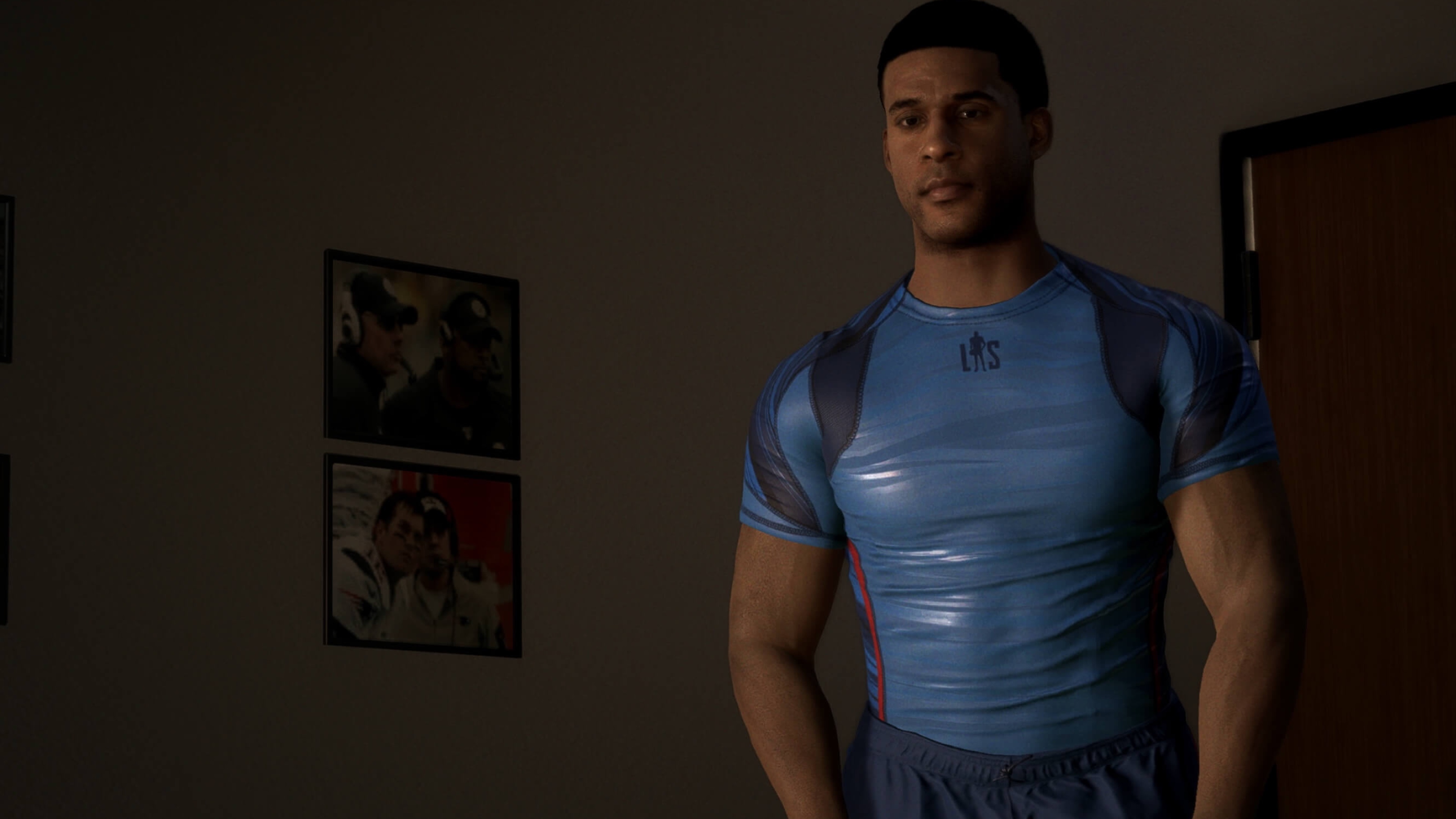 In many graphic adventure games you can tell which dialogue options are going to be the “good” response or the “bad” response, but in Longshot, sometimes all the options seem equally divisive. Was that purposeful?

Telltale works best when the choices feel motivated by the character and the lesser of two evils. It’s very hard to do. That was our goal — I don’t know if we achieved it on every single dialogue choice — but the goal was to make you feel like you’re not sure what the “right” thing to do is. For instance there’s a moment where they get into a skirmish at the combine with the Mario Gonzalez character and one of the choices is to boost up Colt, but you pick a nerve on accident. I like having surprises from the reactions.

Ultimately there are three different endings?

That’s basically how it plays out — Devin and Colt are both going to make it or one is and one will not. I don’t know what the requirement is for endings, but there are cool choices along the way that might just change a scene, might change a future scene or might change the ending, but to get those three endings things along the way are weighted. Behind the scenes we’re grading both characters. Colt is completely hidden to you, so you’re left to wonder, but Devin is visible. There’s thresholds for both of them.