If present day America is your point of reference, Far Cry has taken us to many exotic locations throughout its various installments, from Oceanic regions to the Himalayas and different eras from a future filled with hostile cyborgs to the prehistoric stone age. Far Cry 5 keeps things closer to home, taking place in the fictional Hope county of Montana. With a peaceful and comforting name as Hope, one should immediately suspect that these are dire times for the citizens of this area, and these suspicions are not without merit. Hope county has been suffering from a doomsday cult infestation by the name of Eden’s Gate. Led by Joseph the Father, who like most cult leaders seems to be missing a few screws in his head and while preaching of the gospel of saving all souls, whether they desire saving or not, is done through a heavily-armed militant following.

Playing the demo allowed me to get a feel for the gameplay along with some thoughts on the setting. The first mission of the demo requires the player to liberate an outpost called Fall’s End, which is achieved by killing all the hostile cult members taking over. My first attempt at this did not go well. Armed with a star spangled baseball bat, I charged headfirst into a group of several cultists armed with assault rifles. The first target was a cult member who liked Dave Grohl who I successfully beat to death with my lethal piece of sports equipment. I felt a slight tinge of guilt after doing so as I do like some of the bands Grohl has played in, which accounts for 23 percent of all bands, but this was short lived as the other half dozen or so cultists turned me into Swiss cheese with their assault rifles rather quickly, reinforcing the adage never bring a bat to a gun fight. This made it clear that a more strategic approach would be required.

During the next go round I went around past the main entrance to Fall’s End and got the drop on the lone cultist. After hitting a grand slam with his head his assault rifle was liberated, allowing for much easier elimination of the other cultists. Now that Fall’s End was liberated, the freedom to explore the area was at hand, which meant that an important decision was lingering in the air: do we continue trying to help Hope County with its cult problem or do we go fishing? After roaming the countryside of Hope County which included some ill-fated run ins with some hostile cattle, the only logical place to go was the local tavern, where it was revealed there was a trouble a brewing down at Rye & Sons Aviation. 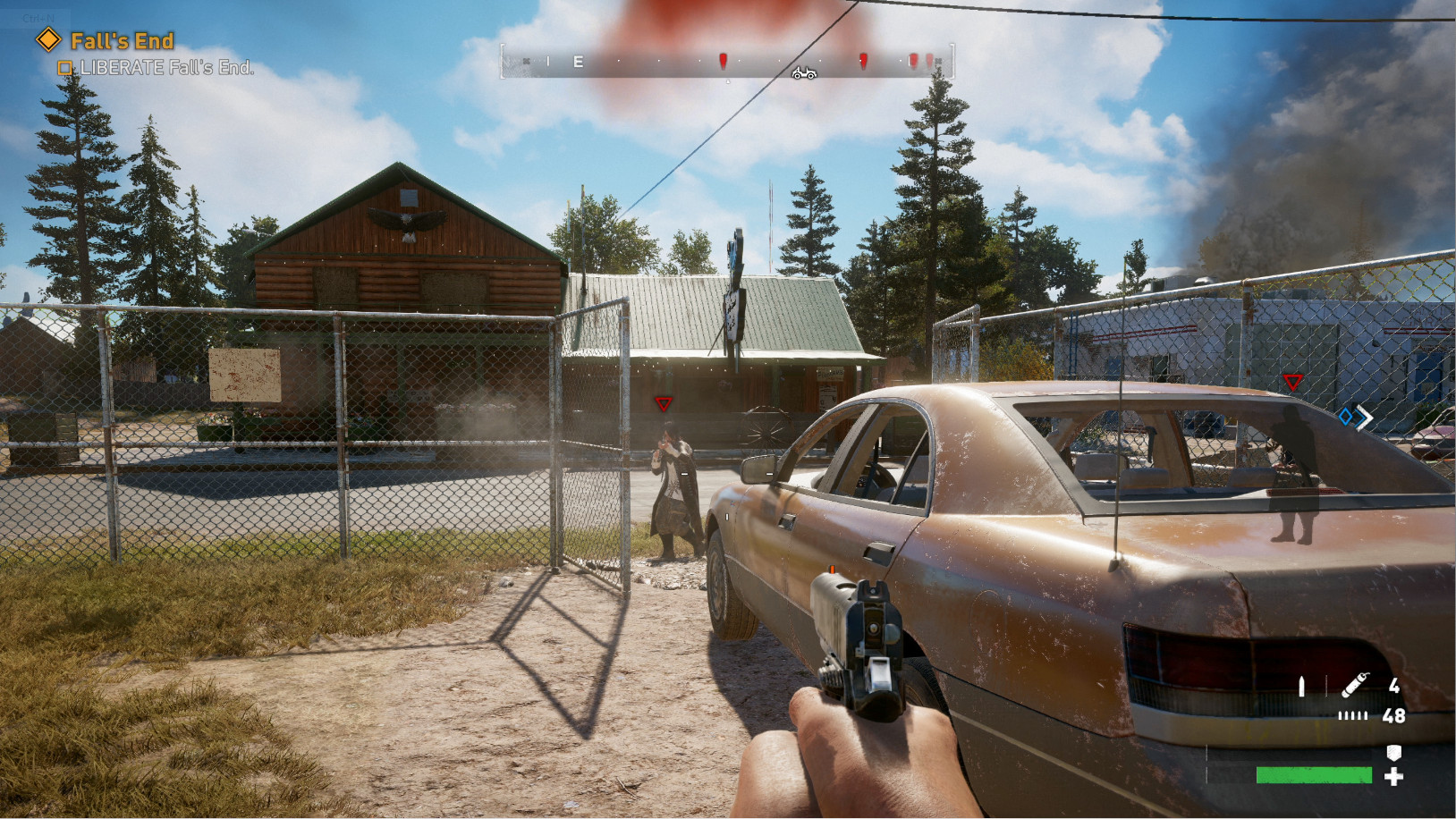 After exterminating the cult infestation at the airfield, we meet Nick Rye who is in a bit of a pickle. He wants to go on an air raid mission to take out some silos owned by Eden’s Gate. The problem is Nick’s wife won’t let him take part in this due to her having some crazy idea that Nick will end up dead and their daughter will be raised without a father. In true video game heroic fashion, the player steps in without hesitation to take on this deadly mission himself, which brings us to a new feature in Far Cry 5, which is the ability to pilot an airplane. As someone who never quite mastered aviation in Grand Theft Auto V, the basic flight controls were easy to pick up and bombing those silos was no problem. The subsequent dog fighting on the other hand was a different story, which could be a combination of overly sensitive controls and me not being good at flight games.

One of the more interesting aspects of Far Cry 5 is the influence of current events. As previously stated, Far Cry games tend to take place in locations that westerners would consider exotic and foreign. Having Far Cry 5 take place in Montana seems like a departure from what we have come to expect from the series, but this was deliberate. If the inspiration for the setting could be attributed to a single event, the forty day occupation of the Malheur Nation Wildlife Refuge would be this writer’s guess. Far Cry 5 explores what the world could be like if anti-government extremists were successful in bringing about the collapse of society, at least on a regional level. Far Cry 5 did incite some controversy when its premise was announced a few months due to real world political tensions. While being a complete work of fiction, the religious fanaticism and rural area militias do draw parallels to real world events and may resemble some people’s views of possible worst case scenarios that could happen in this country. The name Eden’s Gate is possibly a reference to Heaven’s Gate, the cult that is known for their mass suicides in 1997. This isn’t the first time a game has used the United States as a setting for a worst case scenario with Call of Duty: Modern Warfare 2 and the entire Fallout franchise immediately springing to mind. Far Cry 5’s setting does feel more reflective of current turmoil, however, and perhaps more realistic than the scenarios presented in those other games. That being said, Far Cry 5 is first and foremost a game that is meant to be entertaining and not an overt political statement, though civil discussion generated from the ideas and themes presented would not necessarily be a bad thing. 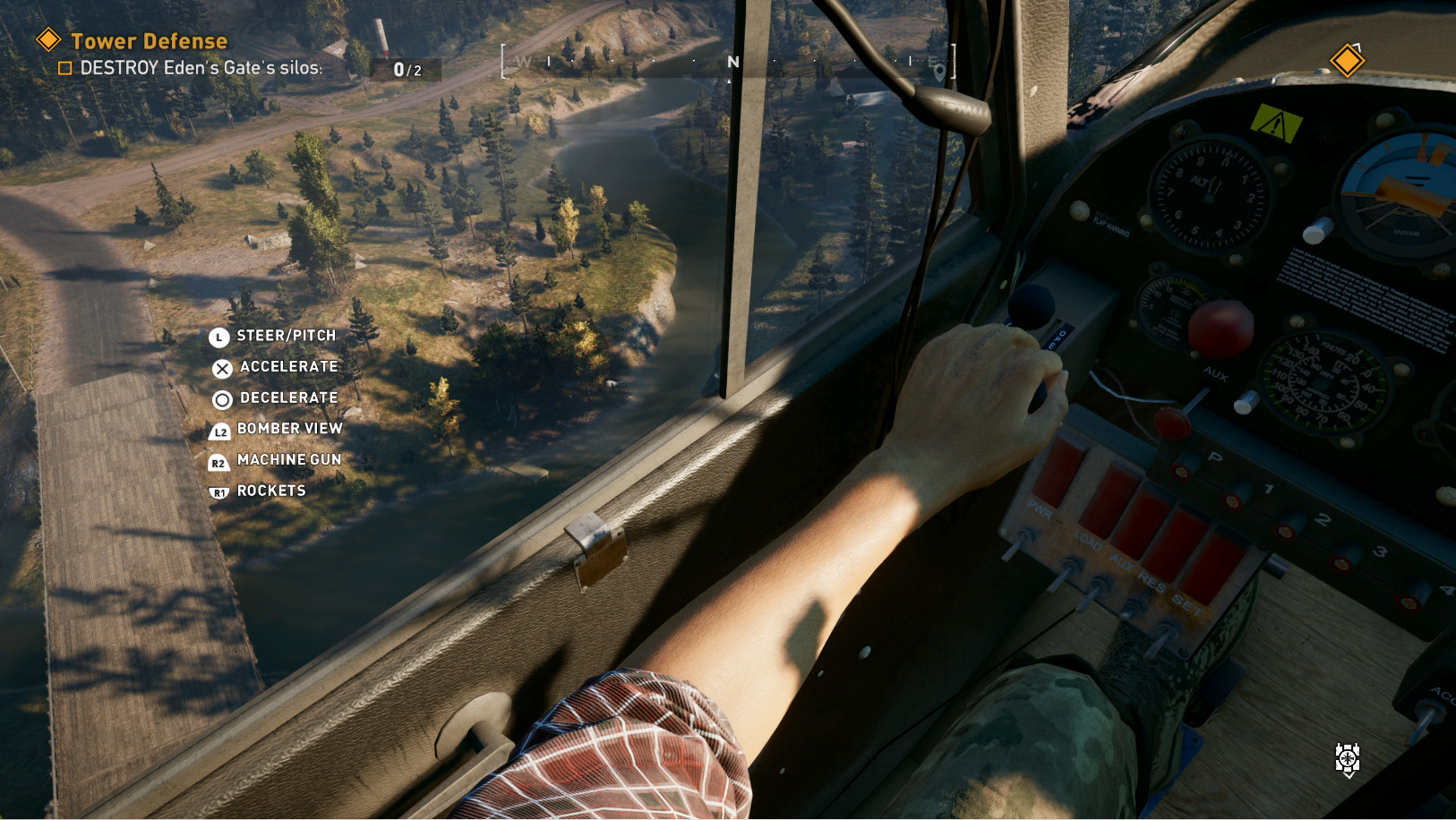 Aside from the addition of the piloting skill and the less exotic setting, the limited playtime with the demo indicates that Far Cry 5 is business as usual for franchise. I had a varied arsenal of guns during the demo and was getting into fights with everything from gun toting cultists to irate livestock and totaled several pick up trucks. The combat was frenetic and enjoyable, and while the premise draws influence from real world events and tension, the over the top action helped prevent the game from taking itself too seriously and keeping the required element of levity one needs when single-handedly taking on a militant doomsday cult. Regardless of what one person’s stance might be on the choice of location and story, the material presented in the demo indicates that, based on merits of gameplay, liberating Hope County will be an enjoyable experience.