Assassin’s Creed has been a long-running series of open world assassination games that also doubled as educational material for less than 100 percent accurate history lessons. A neat feature of Assassin’s Creed was to visit different historical periods, meet noteworthy people from their respective times and in some cases kill them. Assassin’s Creed Origins brings us to the birth of the Brotherhood. This installment will take place around the year 49 BCE during the Ptolemaic period of Ancient Egypt (which is probably before any of us were born), and the Roman Empire and Egypt weren’t actually getting along the way two BFFs should.

Assassin’s Creed Origins has the player step into the sandals of Bayek, the last of the Medjay. The Medjay are powerful ancient warriors and protectors of the Egyptian way of life. Bayek happens to have a wife by the name of Aya, who is a formidable force on the battlefield in her own right. She is not Medjay, but she has trained with Bayek and been a companion to him since childhood so doing anything to incur her wrath is probably very ill advised. Also, she is an ally to Cleopatra so in addition to being half of a deadly duo she has friends in high places. Caesar and Ptolemy are other historical figures confirmed to make appearances in Assassin’s Creed Origins, though it is a safe bet they will not be the only ones.

Hardcore Gamer was able to get our greasy mitts on a demo that took place somewhere in the middle of the game in the great city of Memphis (not the one with Graceland). At this point in the story Memphis has been the capitol city for eight dynasties and was bursting with rich culture. This segment began with Bayek canoeing to this great city and the first thing on his mind is to reunite himself with Aya. From this sequence the amount of detail that went into making Assassin’s Creed Origins visually stunning is evidence. From the animation of the water to character design details like eye make up and the visible vein texture in Bayek’s arm (he must work out) every effort was made to make this a great looking game. The environments are all extremely detailed, and at one point during a discussion Bayek was having it appeared there was a dead hippopotamus in the background. 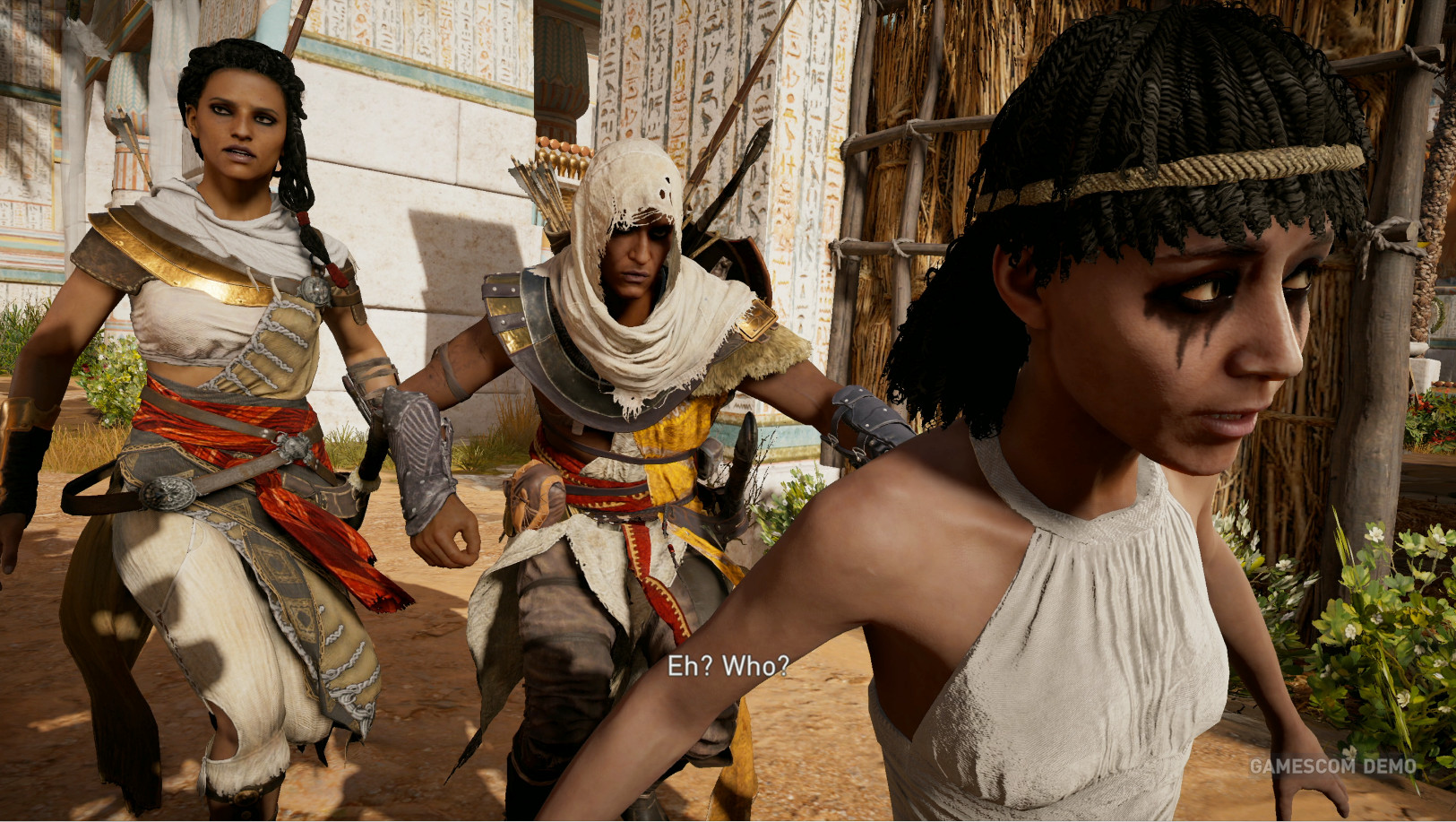 Upon reuniting with Aya, the two travel via canoe to the Temple of Ptah where they tend to the ailing Apis Bull. Using the Animus Pulse, Bayek is able to bring attention to hidden items and investigate the surrounding areas to attempt to ascertain what might be causing the illness of this great animal. It seems as though those in charge of feeding him have found a subtle way to slowly poison the bull without being detached, that is if it wasn’t for this meddling Medjay. Upon being confronted, the guilty parties reveal that they were simply carrying out orders from a much greater evil and despite their desire not to kill the Apis Bull they were put into a position where they had no choice.

Bayek sets out to right this wrong and as one could guess the resolution was effective but not peaceful. Dispatching the enemies can be done in a variety of ways. Like any true assassin, Bayek can sneak up next to one of them and assassinate them with the press of a button, provided he remained undetected until he gets the jump on the them. He can use his Spider-Manesque ability to scale walls where he can use this vantage to pick off guards with ranged weapons or do a swan dive with a murderous landing. Or he could forgo finesse entirely and just kill everyone in a confrontational melee. Bayek’s melee attacks, at least with the weapons available in this demo, cover a wide area of attack so precision isn’t too important. Even though assassins are generally thought of as stealth killers, the combat mechanics feel designed with an more action oriented game in mind, which in this writer’s opinion is a positive. Stealth kills are cool and Assassin’s Creed Origins allows them to be pulled off easily, but when graceful undetected kill attempts go sideways it’s nice to know Bayek can also handle business John Woo style. 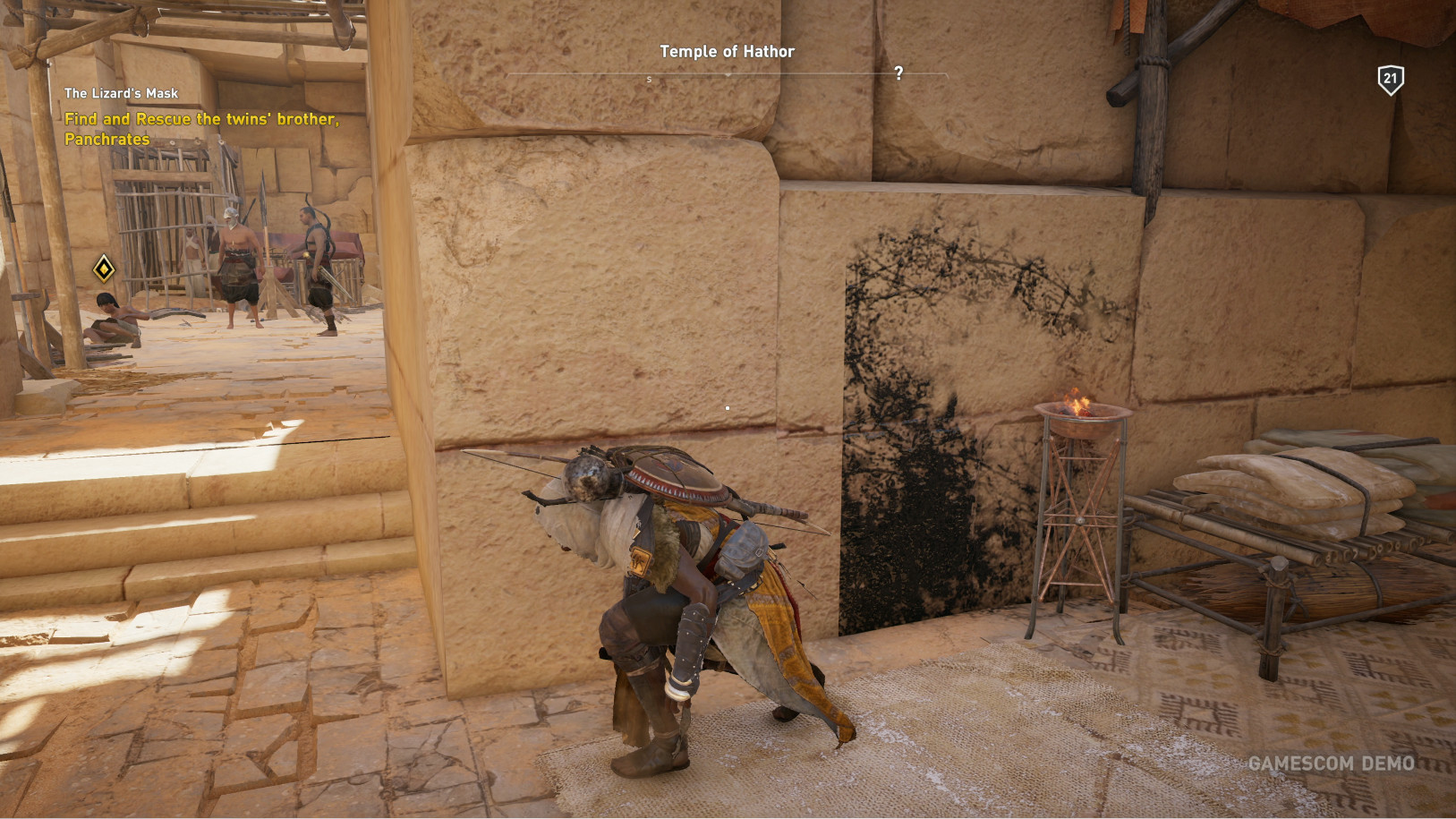 Following this we see a cutscene to advance the story and are given direction in what we are to do next in this mission. The story presented during this portion of the game was compelling enough to make me want to see where it was headed, it felt like now was the time to explore Memphis and get a feel to what this open world offered. Since this is a demo, the Animus had not yet recreated all of the surrounding area of Memphis, but wandering away from town and into the desert it quickly became clear that Assassin’s Creed Origins will have a large world map and there are pyramids in the background. No word on whether or not those will be explorable, but it would be a cool feature. Back in Memphis there are areas where Bayek can receive bonuses if he clears them by eliminating all the hostile guards that occupy them, along with looting treasures. Knocking opponents off high ledges and using flammable parts of the environment does make clearing these areas a bit easier.

Memphis is a sprawling ancient metropolis and finding exactly where Bayek needs to travel can be a daunting task. Fortunately for him he has been gifted with a pair of eagle eyes. That statement is meant to be taken literally; he can summon an eagle companion to fly around and mark enemies and other targets of interest. The eagle can be used to find places to fast travel to, or in cases where that isn’t an option, at least set a marker so guiding Bayek to the desired destination can follow a clear path. For non utilitarian purposes, the eagle can be used just to fly around and leisurely take in the view of this ancient desert civilization. 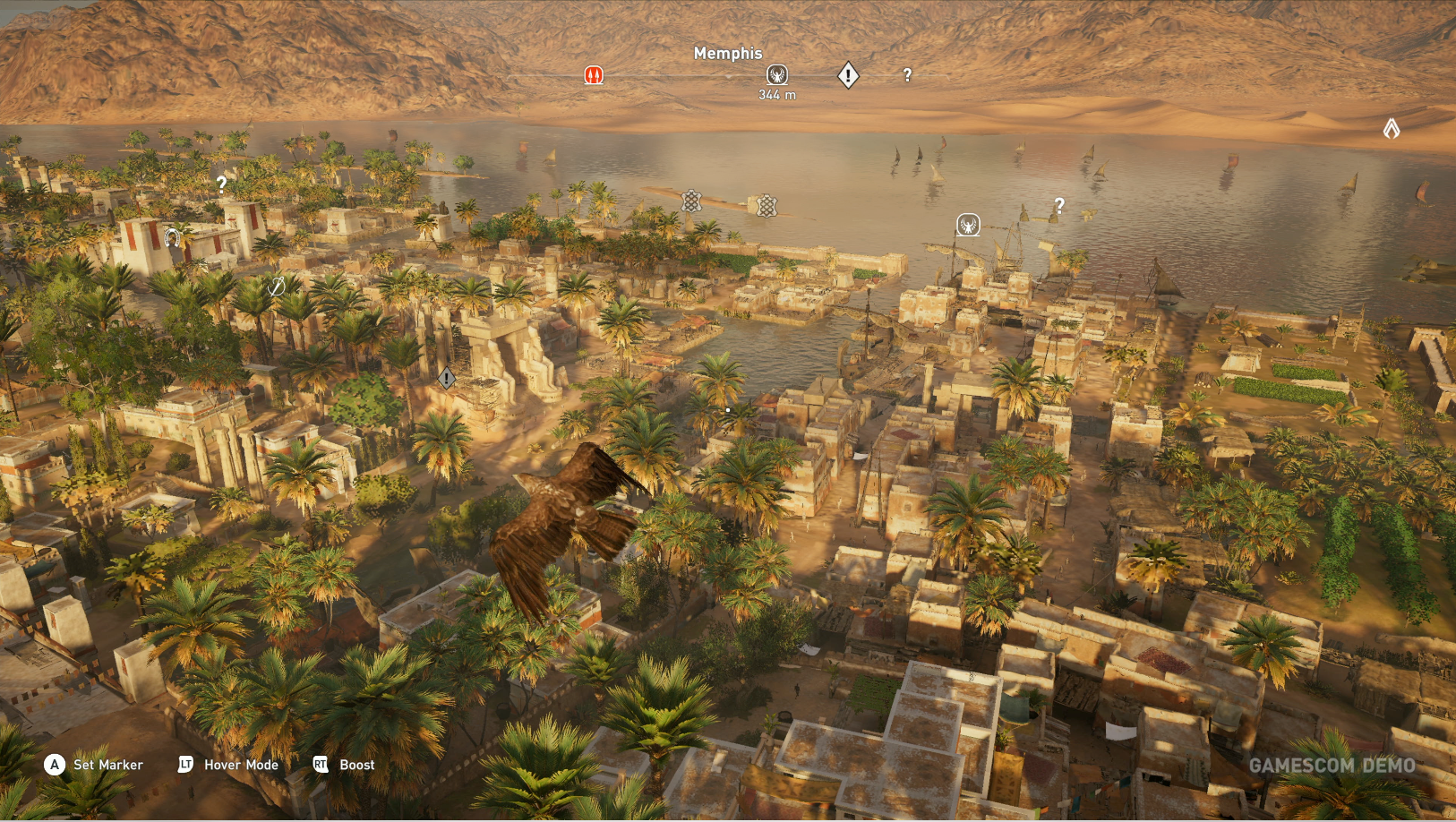 Assassin’s Creed has been a popular series for several years, though the earlier entries seemed to receive near universal acclaim while some of the more recent entries have received more mixed reviews. The franchise took 2016 off and didn’t release a new mainline entry, though we did get a movie, some entries in the Chronicles series and the Ezio Collection, which many consider to be when the series was in its prime. No game can be judged on an incomplete early build, but we can start to get an idea of what the final product may look like. The hope is taking some time off from the main series will allow time to create a truly great game. We won’t know for sure until October but Assassin’s Creed Origins shows potential to be a standout entry in the series.