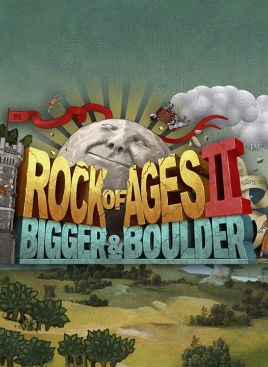 Chilean indie developers ACE Team have found huge success in crafting games with quirky, offbeat worlds and premises, from the punk fantasy first-person brawling of Zeno Clash to the ’50s b-movie top-down action of The Deadly Tower of Monsters. But arguably, their most successful game so far has been Rock of Ages, a game about crushing enemy armies with a giant boulder that was basically the lovechild of Marble Madness and a real-time strategy game, and which was fun stuff indeed. And now, after six years, we finally have a sequel to this bit of zaniness, Rock of Ages II: Bigger & Boulder. But does this juiced-up new Rock of Ages keep a-rollin’ or does it merely fade away?

This time around, the mythological figure in peril that we control is Atlas, who after having dropped the Earth he was holding while God was still working on it and thus causing the continents to split up, now picks up Sisyphus’ boulder and heads into Earth, thus getting into tussles with various historical and fictional figures along the way. Yeah, don’t question this scenario much, the plot in Rock of Ages II is merely an excuse to set you up with boulder-rolling combat against the likes of William Wallace, Hercules, Vincent Van Gogh, Don Quixote, Baba Yaga, and a burning giraffe (again, don’t question it).

So upon starting the story campaign, you’re plunked into a map of Europe (with a side trip to Egypt), rolling your rock around the paths as you choose which area/enemy tower to confront next. Defeating one means it no longer blocks your path, allowing you to get past it and pick up new units, as well as earning starts to eventually unlock the gates to the boss battles. Simple, while allowing for a bit of freedom in choosing battles. So the first two matches went fine, both of the enemies defeated, provided a good introduction to the gameplay. Then I lost the third match after experimenting with a new boulder I had unlocked. Well, I could go for a rematch, but maybe I’ll just head back to the map and see what else I can try out first. Okay, at the map again, now let’s go to…wait, why is the tower crumbling? I lost that fight against Baba Yaga! Why do I suddenly have a star, why is my flag going up and letting me advance? Do I get this all simply as a participation reward or something? 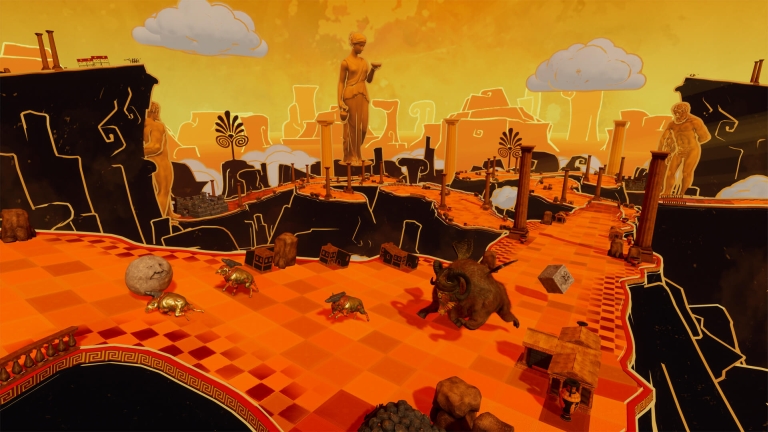 Well, after confirming things with a fellow critic and the dev team, it turns out that there is actually a notable bug in the game (or at least the PS4 version of it). Basically, win or lose, exiting to the map will grant you a star and let you move on, behaving like it was a win either way. A patch is planned as soon as possible to remedy this issue, but it is quite an embarrassing thing to have in a game such as this, since it basically allows you to beat most of the game without actually doing anything. Mind you, it does make it easier for those of us who had to blast through the game for review purposes, but still…

It says a lot, though, that the campaign in Rock of Ages II is still solid enough that a bug like this only hampers it slightly. Like the original, the Monty Python-style animations and sense of humor are a true treat, providing a lot of charm and some stunning visuals. And with the number of art periods to serve as backdrops being bumped up to fifteen, this makes for a wider range of art styles, allowing the developers to truly get even more creative this time around. In addition, the level design is also quite excellent, providing more variety among the battlefields, from those with intersecting paths to those based around cannons and platforming, and those even working perfectly in tandem with the artwork and historical figures, like La Mancha having shades of a giant mini-golf course. 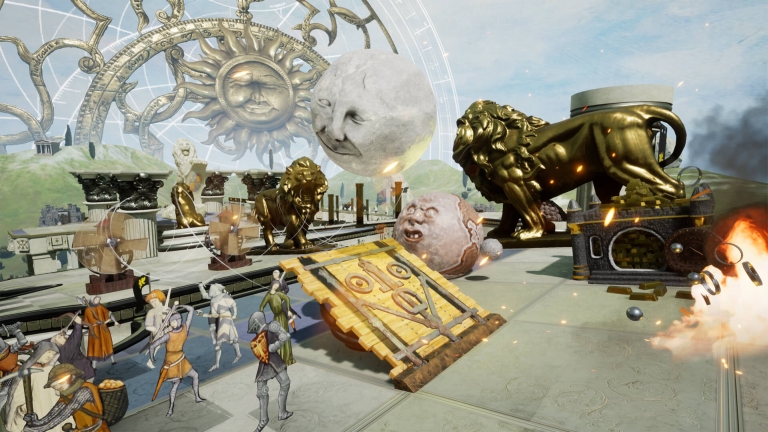 Gameplay-wise, things are still similar to the first game. While your boulder is being carved, you go into a into a top-down view of the enemy’s course (identical to yours) and place down units to attack and defend yourself from the rival boulders, all while your opponent does the same. When your boulder is ready, you let it loose and take control of it as you roll it down to crash into the castle gates at the end, dealing damage to it, all while avoiding obstacles and other units along the way. Of course, the other commander is doing the same, so you have to build fast and roll fast before they can get ahead of you, all while making sure you earn enough gold through banks or the destruction of enemy forces, being able to spend it wisely while properly strategizing unit placement. Break down the gates first and squash the figure inside, and you win.

It can indeed be some tense action at times, especially when confronted with certain scenarios. The second your boulder is ready, will you act fast and deploy it in order to beat your opponent to the punch when it comes to striking a blow, or use a bit more time to build more defenses, even though the enemy could launch at any moment? Will you risk the shortcut going through a course, knowing that falling off means losing valuable time? Can you look for a secure place to build a bank for extra gold quickly enough? Several matches come down to the wire more than often, making things only sweeter when you pull off a successful win or gain the upper hand in a way, such as successfully destroying an enemy boulder before it can complete a run. Quick thinking is rewarded, and it makes for some stellar gameplay indeed. 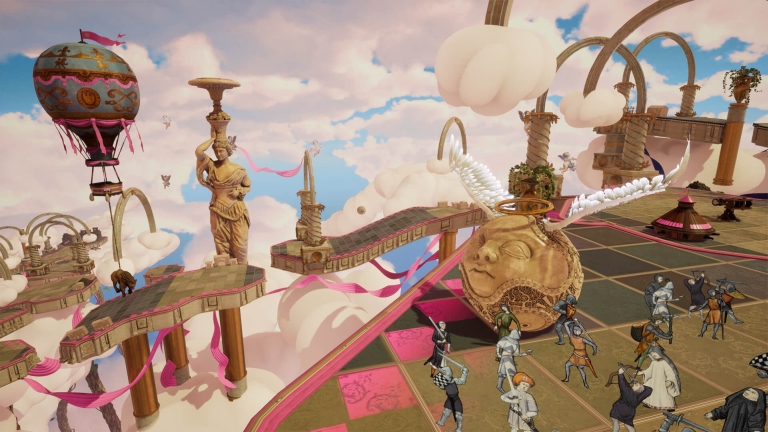 If you are looking for a change of pace in Rock of Ages II, though, there are boss battles to break things up, pitting you against giant statues and monsters. Sadly, these are a bit of a letdown, either ending up being too easy, too annoying, or both, typically just relying on hitting a weak spot three times (except for the final boss, which loses points for not initially explaining the controls for the sudden gameplay change in it). But there is a series of fun obstacle courses to race against in multiplayer modes as well, along with individual regular battles, which allow for online and local multiplayer. And on that note, ACE Team is automatically getting praise for allowing AI opponents on local multiplayer matches, something missing from a good chunk of couch-based games these days.

To complement these multiplayer shenanigans (with some co-op sprinkled in as well), the campaign allows players to unlock various avatars, flag options, and even war paint for their boulders as well. But the real meat is in the different boulders and units you can unlock, each with their own unique abilities. Appropriately enough for a sequel, Rock of Ages II gives you more to work with in both areas. In terms of boulders, you can unlock ones that will stain entire sections of the playing field, preventing enemies from building units, some with projectiles that can help destroy obstacles, lighter ones that are more fragile but can jump higher, or just those that look weird, among others. Units, meanwhile, include the likes of Da Vinci tanks that move back and forth, giant whales that suck in boulders, balloons with wild animals dangling from them that attach to foes, and more. Aside from again providing a showcase for the game’s humor and creativity, it also gives you a lot to experiment with, attempting to figure out which lineup is best suited for each battlefield and opponent. Like the title says, it does indeed make for a bigger and bo(u)lder game. 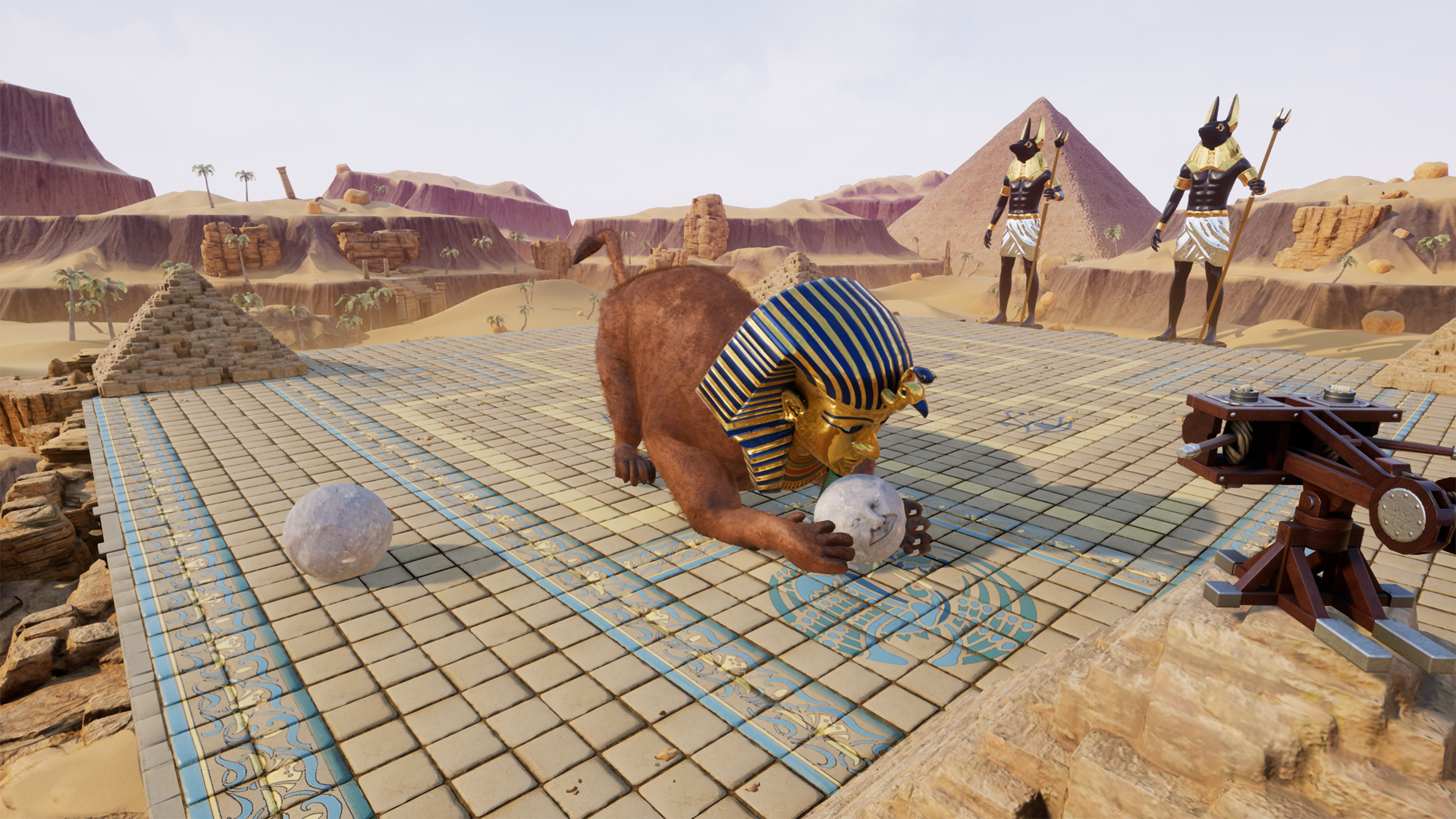 Even without the post-launch fixes to come, Rock of Ages II: Bigger & Boulder is an excellent game and basically acts as everything you would hope for a sequel to have. The new levels are a treat to play in with eye-popping visuals, the humor is as chuckle-worthy as ever and the increase in options when it comes to boulders and units to work with allows for deeper strategy and more insane skirmishes, be it against the AI or a friend. So yes, gimme, gimme, gimme, gimme one more for the road, because this is one crazed delight of a boulder-rolling romp through history you may indeed find yourself coming back to for quite a bit.