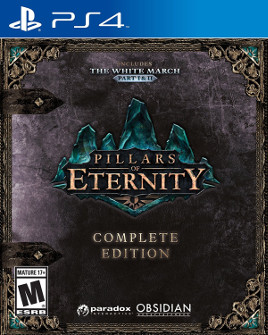 Pillars of Eternity was released exclusively for PC roughly two and a half years ago in 2015. Drawing inspiration from Dungeons & Dragons PC games such as Baldur’s Gate, Pillars of Eternity wore its influences on its sleeve while creating its own unique world in bringing a modern take on classic PC RPGs. The game was met with near universal critical praise, and after spawning the two part expansion pack The White March, the full Pillars of Eternity experience has been bundled together for console release appropriately titled Pillars of Eternity: Complete Edition, giving console gamers the opportunity to enjoy the critically acclaimed title.

While trying to avoid sounding like a fanboy for either platform, PC and console gaming can be completely different animals so there are naturally some concerns that may arise when porting a PC exclusive to console and they are somewhat valid. RPGs in this style are designed for mouse and keyboard input which isn’t a viable option for the PlayStation 4 and Xbox One, so the task at hand was to reconfigure the input to accommodate a controller without losing any of the complexity and convenience a keyboard provides. Playing Pillars of Eternity: Complete Edition with a controller may sound implausible to those who completed the PC version, but they did a fantastic job in making the game controller friendly. A less obvious tweak that needed to be addressed is the User Interface. Most of us sit probably about two feet from our computer monitor, and any distance from two to twenty feet from our TV, which can result in significant readability differences. Thankfully the UI was adjusted so players won’t have to strain their eyes reading the on screen text from across the room, except for extreme cases where the player may be ten feet away from a 13 inch screen. Aside from adaptations to making Pillars of Eternity: Complete Edition console friendly, the game remains identical to the PC version after it received its most recent updates, including the expanded party AI levels, increased level cap, and new difficulty levels.

To begin the game, the player must first create their own character, choosing a gender, race, subrace, class and culture. The standard fantasy race choices of human, elf, and dwarf are present, mixed in with proprietary races orlan, aumaua, and godlike. There are eleven selectable classes: barbarian, chanter, cipher, druid, fighter, monk, paladin, priest, ranger, rogue, wizard, each one of these classes has different skills and abilities and can be further customized to the player’s specific choices. Culture sets a vague background for the character and may offer bonuses in certain areas that would make sense with their background. Needless to say, there is a huge amount of freedom players have in customizing their character. For the review play through I went with a male death godlike druid which I name Malfeitor, and my rational for selecting godlike for a race was I thought their misshapen heads were cool looking. 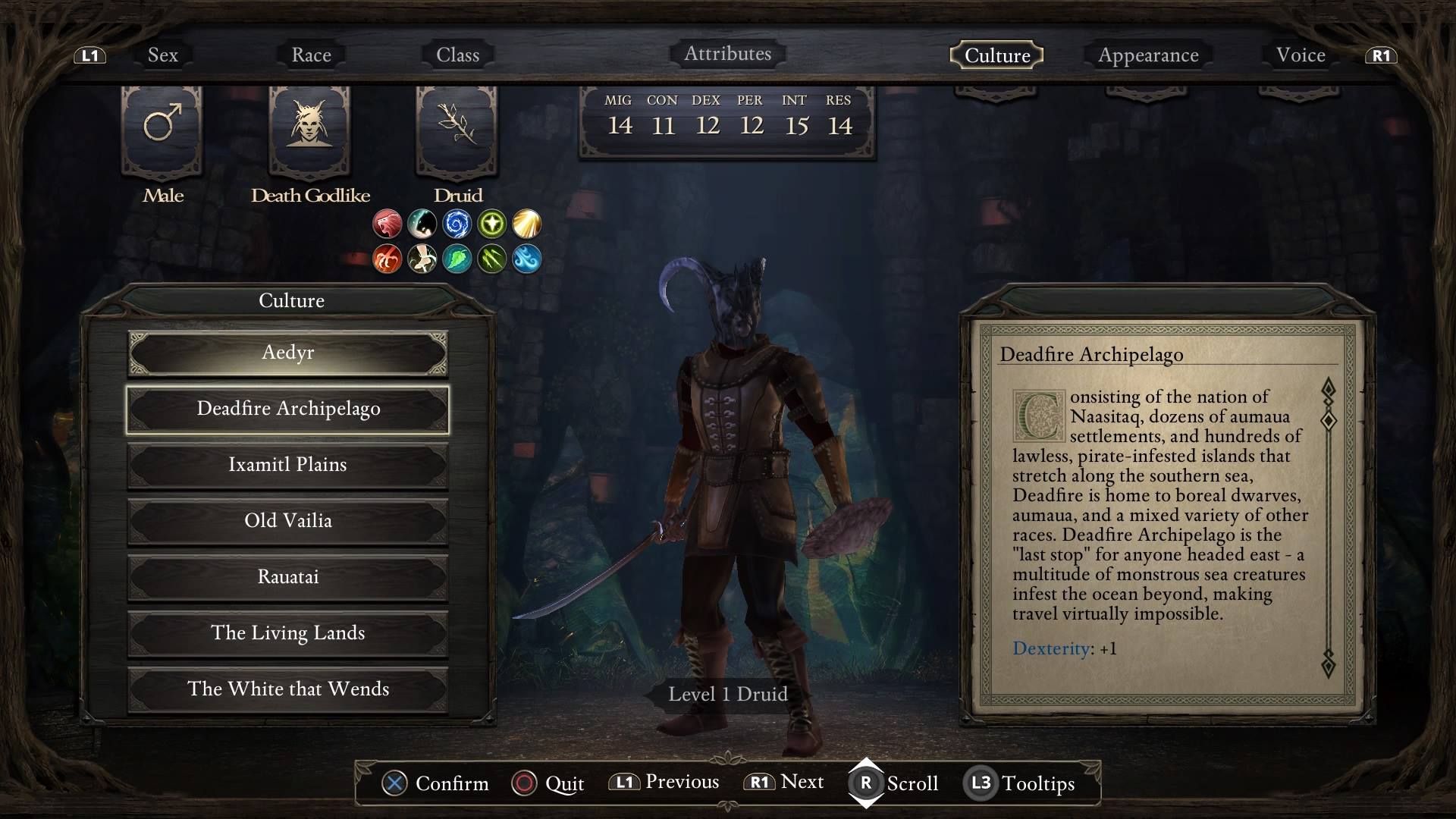 Malfeitor began his journey as part of a caravan, which due to a series of unfortunate events ends up being wiped out forcing him and some survivors to take shelter inside a cave. The caravan scenario and cave really just serve as a tutorial, teaching the player how to use the radial menu, develop some rudimentary combat strategy and get a feel for exploring a rather small cave with a set final destination but no clearly marked path to get there. The end of this is where things get interesting, when Malfeitor stumbled onto some ritual where a cultist uses a machine to rip the souls out of the bodies of those with him. The exact science behind it is difficult to fully comprehend, but somehow he survived the ritual but the exposure to this energy has made him a Watcher and he can now read souls and access memories of their past lives. As cool as that sounds, side effects of being Awakened included waking visions and insomnia, which is enough to drive a person mad and could have a justifiable desire to seek out vengeance on these cultists.

Malfeitor goes to the town of Dyrwood which is afflicted by something called the Hollowborn Curse. This curse is causing the town’s children to be born without souls, leaving them generally not quite right. Mob mentality blames the scientists that toil in soul studies and manipulation known as animancers, but it’s up to the Watcher to ascertain what is really going on in this alleged literal case of science taking people’s souls away. Without giving away too many plot points, there is a definite end to the story of Pillars of Eternity, but the exact details of the ending will vary based on the choices the player makes throughout the game. As this title draws a great deal of influence from classic PC RPGs, there are countless dialog trees and options that will present themselves throughout the campaign, adding replay value should the player be curious about how different choices could impact the results of their adventure. The player’s actions and decisions will impact their reputation, which will influence how NPCs react to them. 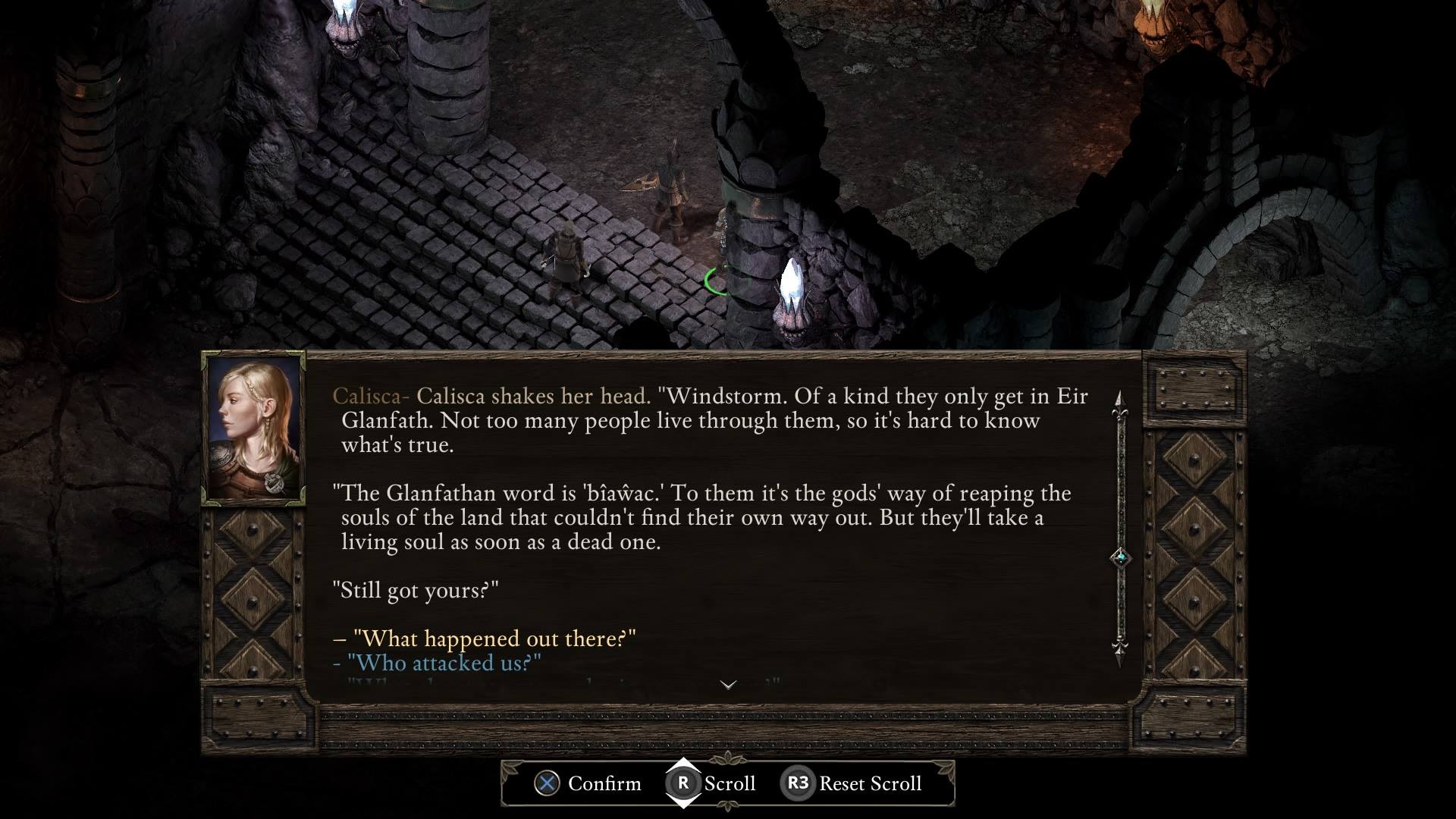 Story and character interaction is of highest importance in Pillars of Eternity: Complete Edition. With almost every character interaction there are multiple responses that can be given, some of which will open up new branches in the dialog tree and others may end the interaction with varying reactions from the NPC. The player can pick up numerous companions on their journey who all have well developed and fleshed out back stories, though at any given time the party cap is six, the player’s created Watcher and five other characters. The party members do have side quests that are separate from the main story but do provide insight into the back story of the companions.

The party moves in one large group, or at least it would make the most sense to do this during the bulk of the travels. The player is free to break a specific character off from the group and have them do some exploration on their own, which could have some advantages to the players that wish to scout out a location without drawing too much attention to themselves. Switching characters is as easy as pressing a bumper button, and to get the band back together simply requires holding L1/LB while pressing R1/Rb (depending on if you’re team Microsoft or Team Sony). Battle plays out in real time with everyone acting at once, but the game can be paused to open the radial menu to issue commands to all party members which is great since this allows the player freedom to command six individuals without having to worry about getting killed while selecting the proper special ability for the occasion. Like most of these games, combat is pretty brainless at the beginning but learning how to develop strategies on the fly and using everyone’s special abilities is crucial for success later on. Unlike most RPGs, experience points are not awarded for killing enemies in battle but by completing quests, so while the combat is enjoyable players who do not want to level grind by constantly going to battle do not have to and this potentially offers more rewards for players who wish to resolve a situation through a more outside the box approach. 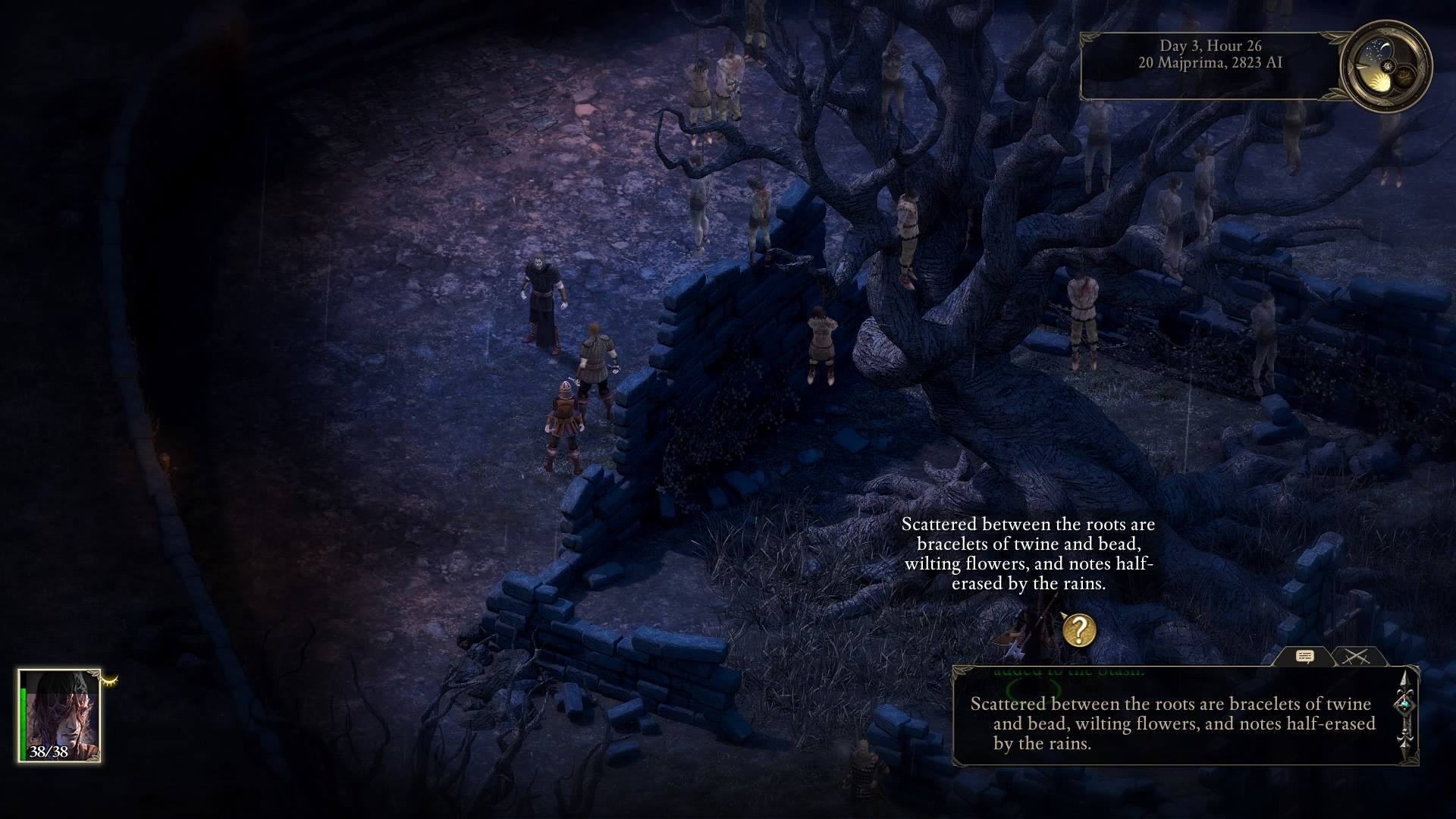 The two expansions, The White March – Part 1 and 2, are naturally included in The Pillars of Eternity: Complete Edition and take the player away from the lush green forests of the main campaign into the northern region known as the White March, appropriately named for the snow covering everything. When it was initially released for the PC, this extra content added about twenty hours to the game. The game mechanics remain the same as the base game, and changes that were brought to Pillars of Eternity such as an increased level cap have already been implemented since the beginning of the console port. In a nutshell, this portion of the game revolves around the White Forge, and story heavy, dialog heavy, decision making gameplay remains prevalent. Pillars of Eternity is a large enough game that succeeds so well at blending its storytelling with gameplay an expansion isn’t really necessary, but it is nice that it is included and not something that needs to be purchased separately.

The world of Eora is a sight to behold, which great attention to detail in all environmental settings. On screen characters and enemies are typically on the small side, making it difficult to appreciate the amount of detail that went into their design but that tends to be the case with a lot of isometric RPGs. The soundtrack is fitting for the fantasy setting, the composition doesn’t veer too far off from the style of music one would expect from this type of game but is pleasing to the ears and fits the game perfectly. Converting mouse and keyboard input to a controller is not a small feat but the developers were able to make it where playing this title on a controller feels natural, though there is a bit of a learning curve before things click into place. An unsual feature is developer community, which can be turned on or off at will. Someone experiencing Pillars of Eternity for the first time would probably want to turn this feature off as it can be a distraction and ruin the immersion, however people who are returning to Eora might find the information about why they made some of the developmental decisions they did interesting. 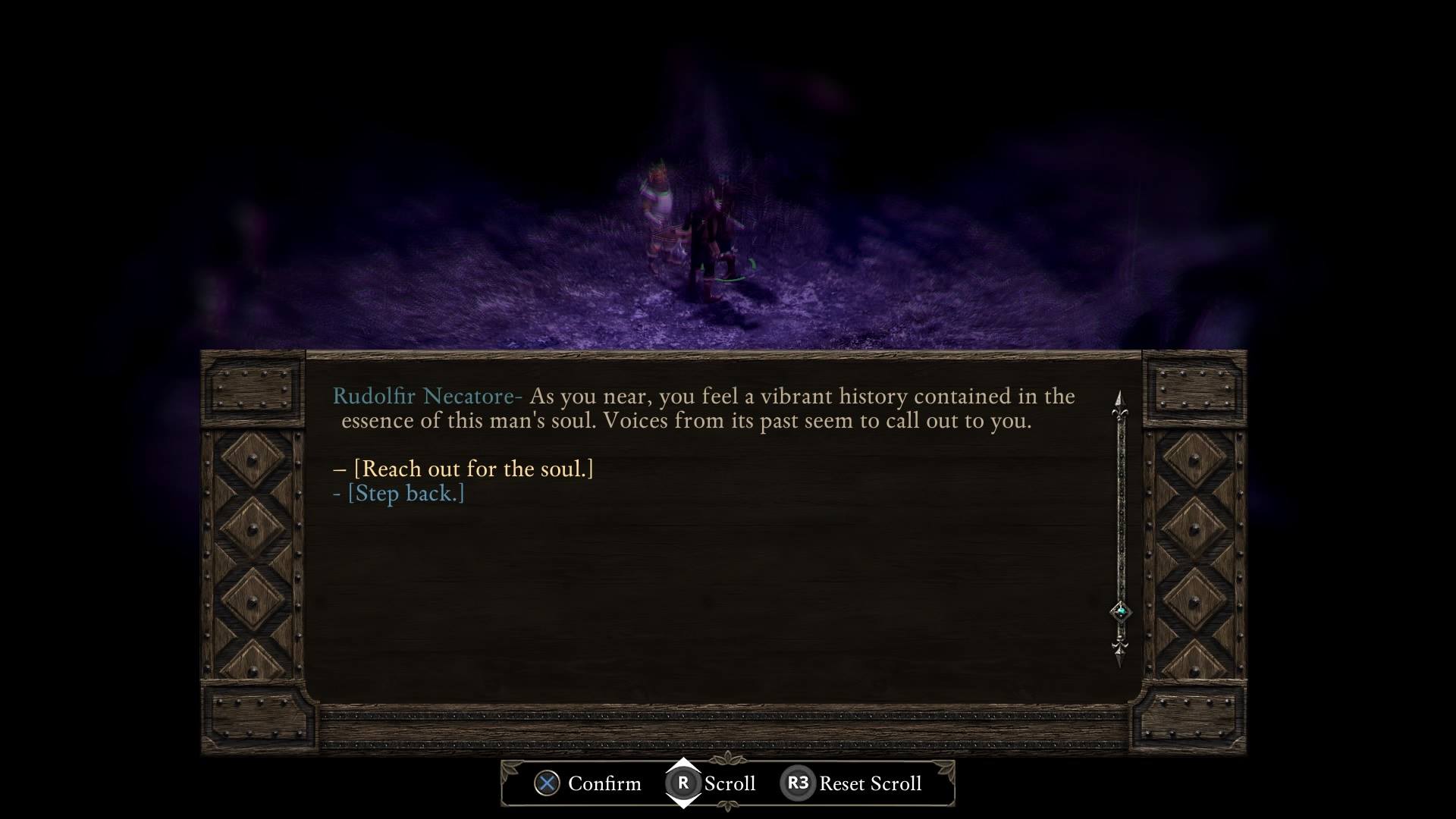 Pillars of Eternity: Complete Edition is a proper send off before Pillars of Eternity II: Deadfire is released next year. Simply the PC game and its expansions released for console in their original form — with the only changes being ones that make it playable on console — those already familiar with Eora don’t need to revisit on console, but any RPG fan who prefers console to PC gaming owes it to themselves to check this one out. This is a perfect example of an old school RPG done in a way to feel contemporary that still maintains an element of tabletop feel to it. Narrative and dialog are major components of the experience and the story told here is developed enough to justify there being such a heavy emphasis on it.