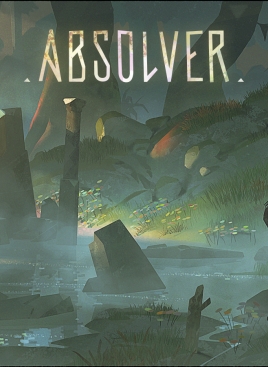 Absolver has been one of my most anticipated games of this year. Aside from being another addition the the always-enjoyable roster of Devolver Digital games, it presented an combat system, being a giant online fighting game where players would traverse a mysterious and intriguing world, honing their craft, developing attacks bit by bit, all to create one of the most incredibly deep brawlers of the year, one that rewarded pure finesse. I knew it could be something special. And I also knew that I would be absolutely horrible at it.

Much like particularly intense survival horror games such as Alien: Isolation, fighting games that require a particular level of skill are in that category of games that I’m horrible at, yet still have a deep interest in. We all have them. Actually, I suppose I’m not horrible at fighting games, just that I don’t have the skills to pull of particularly complex combos and special moves. So why did I choose to review Absolver, then? Well, aside from the previous statement that the game still appealed to me quite a bit, it occurred to me that while this is a game that will clearly intrigue hardcore fighting fans and EVO contenders, what about the rookies? The ones who just want an entertaining game of fisticuffs in a colorful world? Is Absolver accessible to all different types of fighting game fans, regardless of their level of expertise? Well, let’s find out…

Set in the mysterious world of Adal, Absolver sees you playing a Prospect, one chosen to head out into the fallen city of Raslan and eventually develop their fighting skills so that they can become an Absolver, able to then pass their skills onto others. To do so, you have to hunt down a series of bosses and mini-bosses known as Marked Ones, defeating them in combat with the various skills and gear you unlock along the way. Simple stuff, but still mostly effective. Then again, like many other fighting games, the real draw here isn’t the narrative, but rather the various moves and fighting styles you’ll be duking it out with. And needless to say, that’s where the game truly shines. 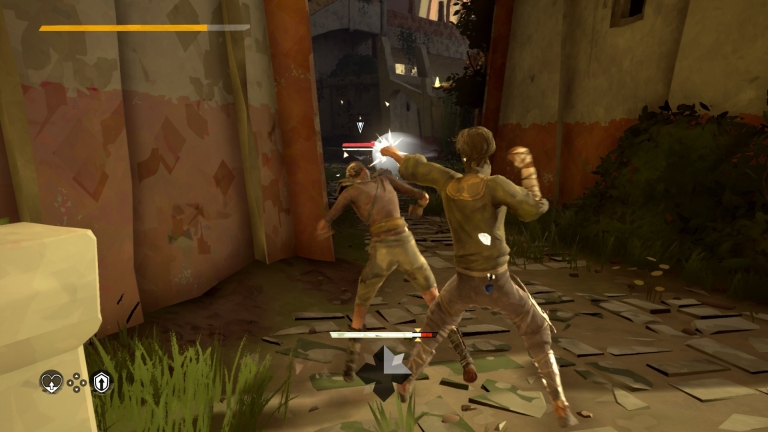 Yes, Absolver’s customizable combat reaches some pretty deep levels. You can choose your character’s combat style, each with various abilities, beef up your various attributes with experience gained, choose the attacks to go in your combat deck, choose stances mid-combat, outfit yourself with various gear you can find that ups your defensive capabilities, and even borrow techniques by joining a school created by another Absolver. For those of you who have played a lot of open-world games that also allow for a lot of customization, it may not sound all that special at first. But indeed, it really does feel like each individual stat, move, and piece of gear you have affects you play, be in it the satisfying crunch that a heavy attack can land, or how being weighed down with certain clothing can affect your speed.

Every choice you make essentially goes towards crafting towards your preferred method of fighting. Not being the best, I decided to focus on making a tank with a lot of defensive gear, going on the offensive. Eventually, though, I noticed that my movement and strength were getting affected, so I decided to resist the lure of any new gear for a while. I was worried that all of this would fail, but go figure, it still managed to work. As it turns out, Absolver is accommodating towards whichever method of fighting you prefer, be it a more direct approach or something with more complexity, which is much appreciated, especially when it comes to pleasing all sorts of gamers. 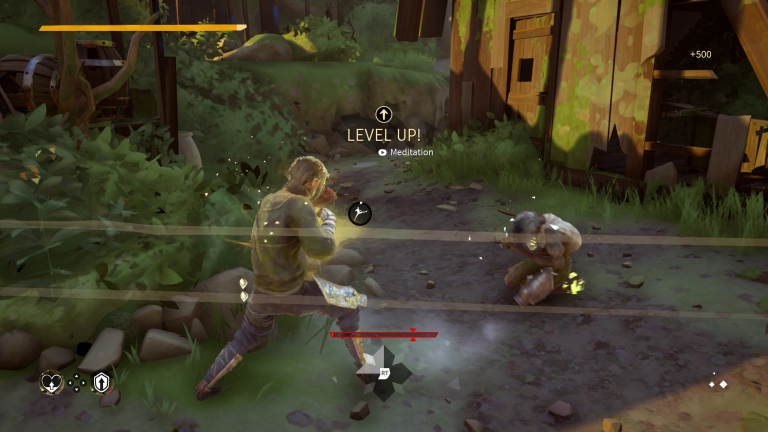 Eventually, though, you will comes across certain foes that will whip your butt quite a bit. As such, you will have to eventually refine your moveset and learn other various skills in order to progress. Even without the schools that let you learn other moves, it does feel like the game is teaching you how to improve your technique as you progress with each match. While the combat does follow your standard light attack/heavy attack/dodge setup, it’s quite effective, and variants such as the styles you can switch to and shards you can activate for certain effects keep things fresh. Even with some traces of repetition now and then, there always manages to be satisfaction upon knocking out a skilled enemy.

In terms of visuals, Absolver looks stunning as well. The designs of the various masks and gear all have fun tribal vibes to them, helping craft the world, and the various ruins all still seem to be vibrant, creating a rather pleasant-looking ruin to brawl in with some rather captivating shots and setpieces. The minimalist soundtrack also works to the game’s advantage, with the sounds of nature setting the mood perfectly, and the more intense tracks saved for major battles. Thankfully, you won’t be experiencing these sights alone, as you’ll run into other Prospects as well in online play. One-on-one duels with them are common and a loss simply means respawning at the same point, presenting more of a friendly skirmish. You can also offer to team up, journeying across Raslan to help out in each other’s goals, in a nice touch.

Unfortunately, Absolver does have a few annoyances that prevent it from achieving true greatness. Now, Adal is deliberately meant to be a more modest MMO world, one that the developers have said you can traverse end-to-end in only half an hour. But even with its smaller size, actually making your way around Adal is kind of a pain. After being given your initial task of defeating the Marked Ones, you’re given a map showing where they are, but it’s extremely vague when it comes to their location in each area. And that wouldn’t be so bad, except you can’t seem to access the map whenever you want. You can only view it altars that you can find activate, showing you your current location, but with no compass or guide of any kind. And you would think the altars would serve as a perfect opportunity for waypoints and fast travel, but nope, they’re mainly used to start combat trials and toggle your social functions. 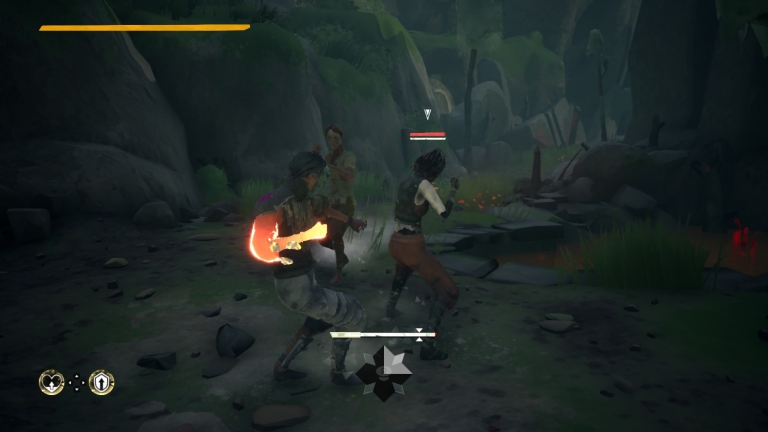 So getting around is a slight pain, and on a bit of a related note, maybe having fall damage and fatal drops was a bad idea. Sure, you can incorporate it into your strategy and kick an enemy off a platform 300-style (with one locale even having such a pit directly in the center of it), but when you’re attempting to navigate up the edges of a crumbling temple, find yourself accidentally punching too hard or slipping off, and thus have to fight through a mini-boss and four other enemies again, you begin to consider that it may not be worth it.

Going back to Adal in general, you may notice that a chunk of the news articles with trailers we’ve covered leading up to Absolver’s release mention how each new clip provides us with glimpses into the world-building, but for the majority of the game, that’s all we get: glimpses. Aside from the basics of the journey to becoming an Absolver, there isn’t much regarding the lore to be seen right now. Most of it only seems to come from the descriptions of various gear and clothing that you loot, brief as it is. And yes, part of it is meant to be vague, crafting a mystique and whatnot, but it still feels like there are some notable gaps to be filled.

At one point I came across one of the bosses, a brother and sister team, notably unmasked. A cutscene started, the duo mentioned something about their fallen clan or whatnot, then the fight began. And when the two were defeated, that was that. No dialogue during or after the fight, no explanation of why these two were so important, nothing about their relationship…hopefully things pick up in the future and we build onto what Adal has to offer, but a lot of it does feel pretty yet blank right now. Even the main goal of becoming an Absolver doesn’t seem to offer much from a narrative view, at least for the moment. 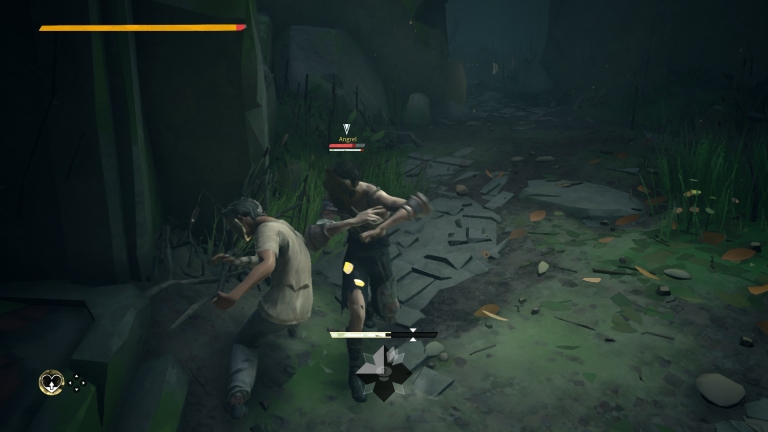 We may have to wait for Absolver’s post-launch content and updates to see if it can truly becomes a legend among fighters, but even as is, it’s a highly-entertaining brawler. The visuals are stunning, the ambiance a perfect fit for a world of martial arts, and the incredibly deep fighting system is fun to experiment with, making the game accessible for both seasoned veterans and button-mashing newcomers to fighting games, with unique features that allow any of those players to hone their craft. Overall, it’s one of the year’s most unique and enjoyable fighting games, and one worth checking out.