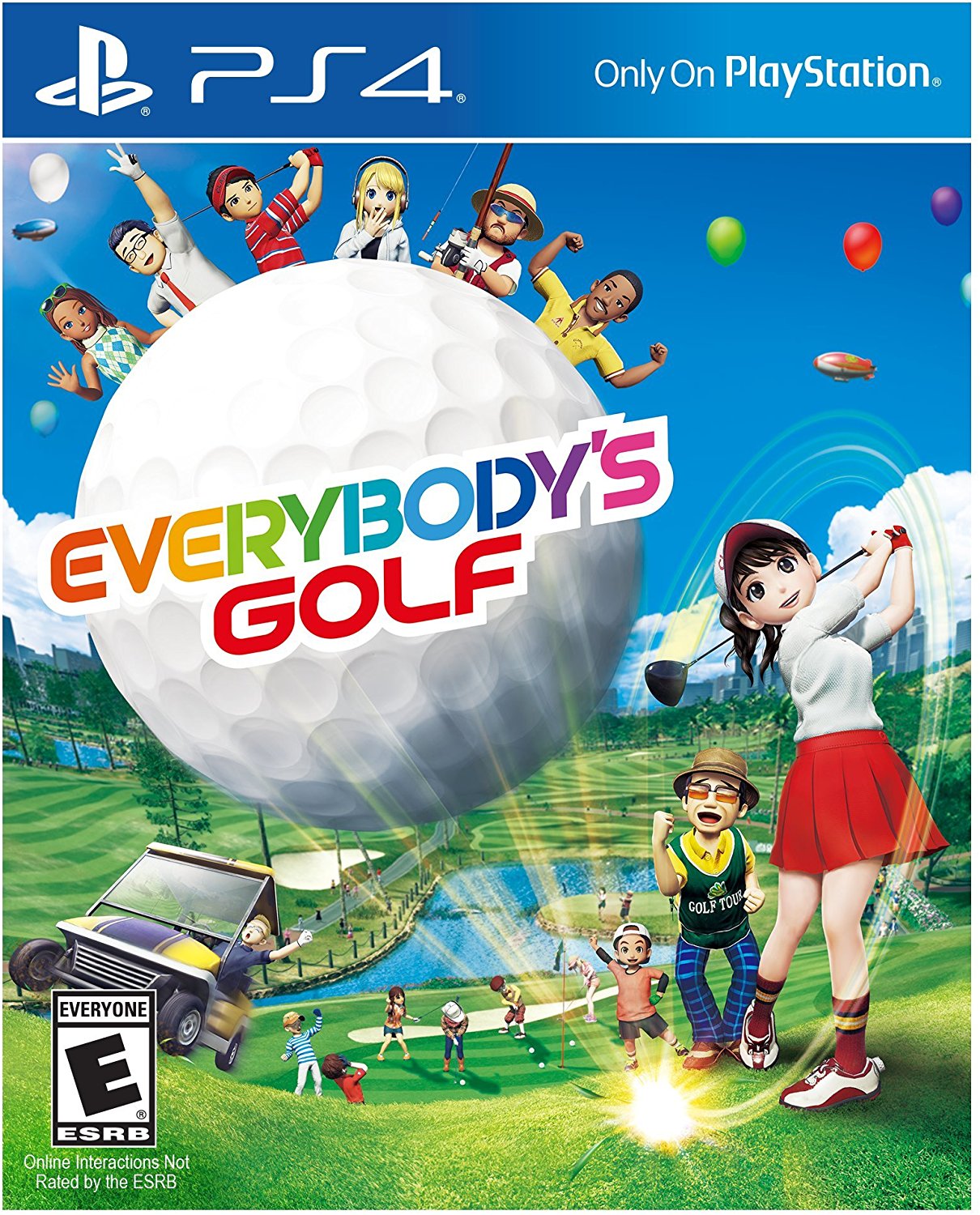 The Hot Shots Golf series has been a cult favorite over the years on many of Sony’s platforms. Being called Everybody’s Golf in other areas outside of North America, the series removed the Hot Shots title here and renamed it Everybody’s Golf. This version is the first on the PlayStation 4 and focuses on a new social aspect of golfing while keeping the addicting and challenging core components. A golf game that feels like a cross between Mario Kart and anime, Everybody’s Golf offers a unique take on the game of golf. It focuses on keeping things light-hearted and fun all while frustrating and challenging players to master it.

The core of the long running series remains in Everybody’s Golf. Swings are based on timing and position while taking other elements into effect. Hitting X once to start the meter for power, while finishing the swing to offer accuracy is how getting perfect hits is accomplished. The game will punish you even if slightly being off on the accuracy and it’s a matter of finding that rhythm to succeed. In the past, putting was a one-hit process. In this Everybody’s Golf, it takes the power, backswing, and location into consideration on the green. What you get is a challenging process that offers a high sense of accomplishment that leaves you begging for more.

Everybody’s Golf features single player and multiplayer modes that tend to blend in with each other. With single player, golfers can play offline tournaments that are used to unlock more courses and attire plus upgrade clubs. Money can also be gained that allows players to purchase balls and other attire including hair styles. The more holes that are played, the more upgraded the clubs will get. This allows for being more competitive overall. It won’t take as many shots to get the ball down the course to improve one’s score. Single player also offers challenges of one-on-one golf, while tournaments are played with the A.I. on the course at the same time. This is a bit strange and while this may be included to provide a social feel offline, a random ball or person popping up can affect one’s focus. 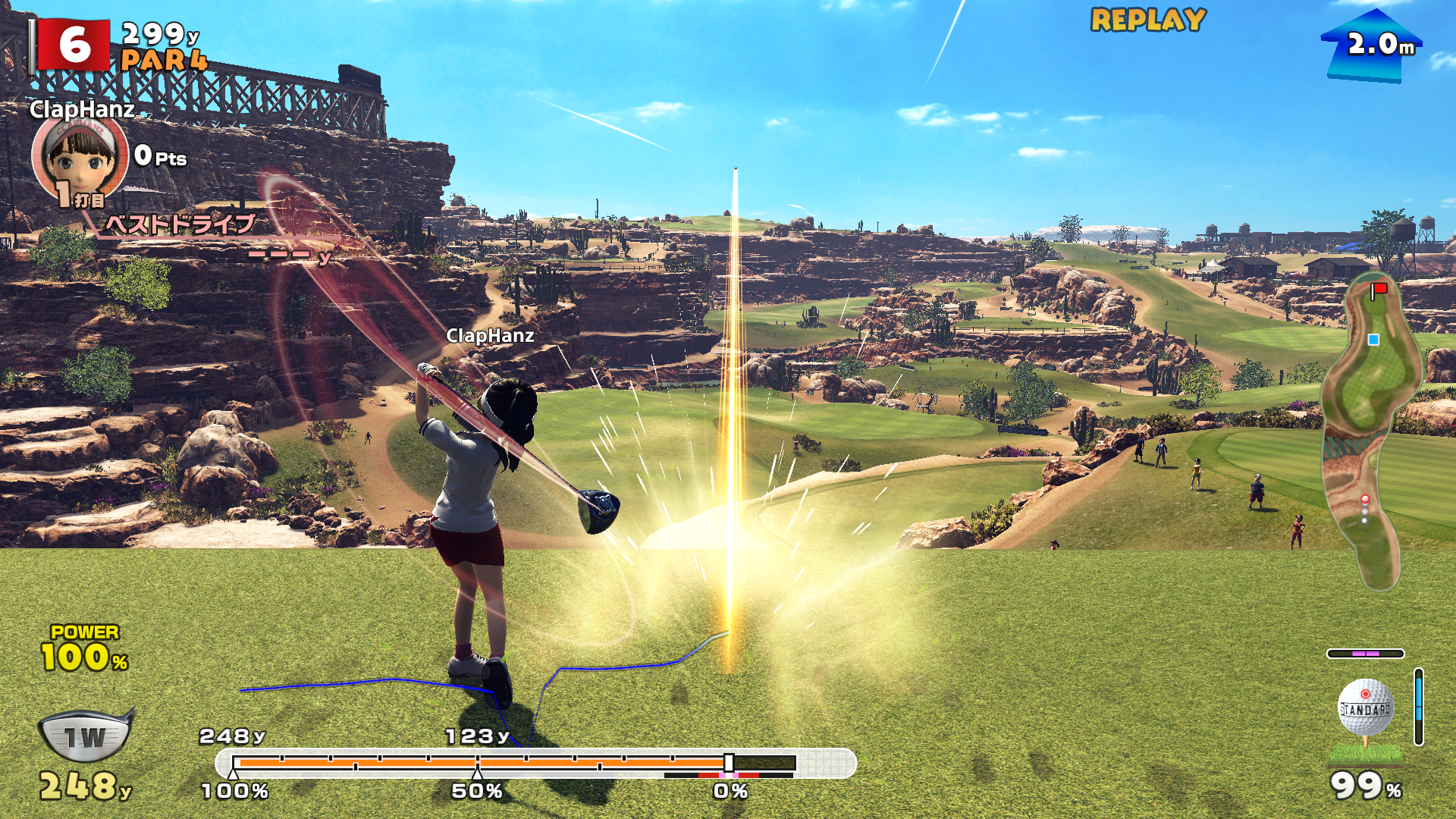 Players can also play on social courses with other players. This open-world idea is new to the franchise as players can run to any hole they want and set scores that go on online leaderboards. From here, players can jump into online rooms to play or play nine holes with people on that course. On top of this, golf carts can eventually be unlocked and players can roam around that way rather than running. Competing in the online rooms will also level up clubs with the more holes that are played. In a strange way, this is grinding the character to improve their stats.

Turf War in a new group competition that will pit two teams against each other. This mode is a bit deeper than that. Players have a time limit to run to specific holes on the course and achieve the best score. The element of this mode is very panicky, and players will find themselves rushed to make shots. Strangely, clubs don’t get upgraded in this mode and its almost as if the Turf War is the proving grounds of Everybody’s Golf. Matches are quick and hectic and are over before you know it, leaving you wanting more. 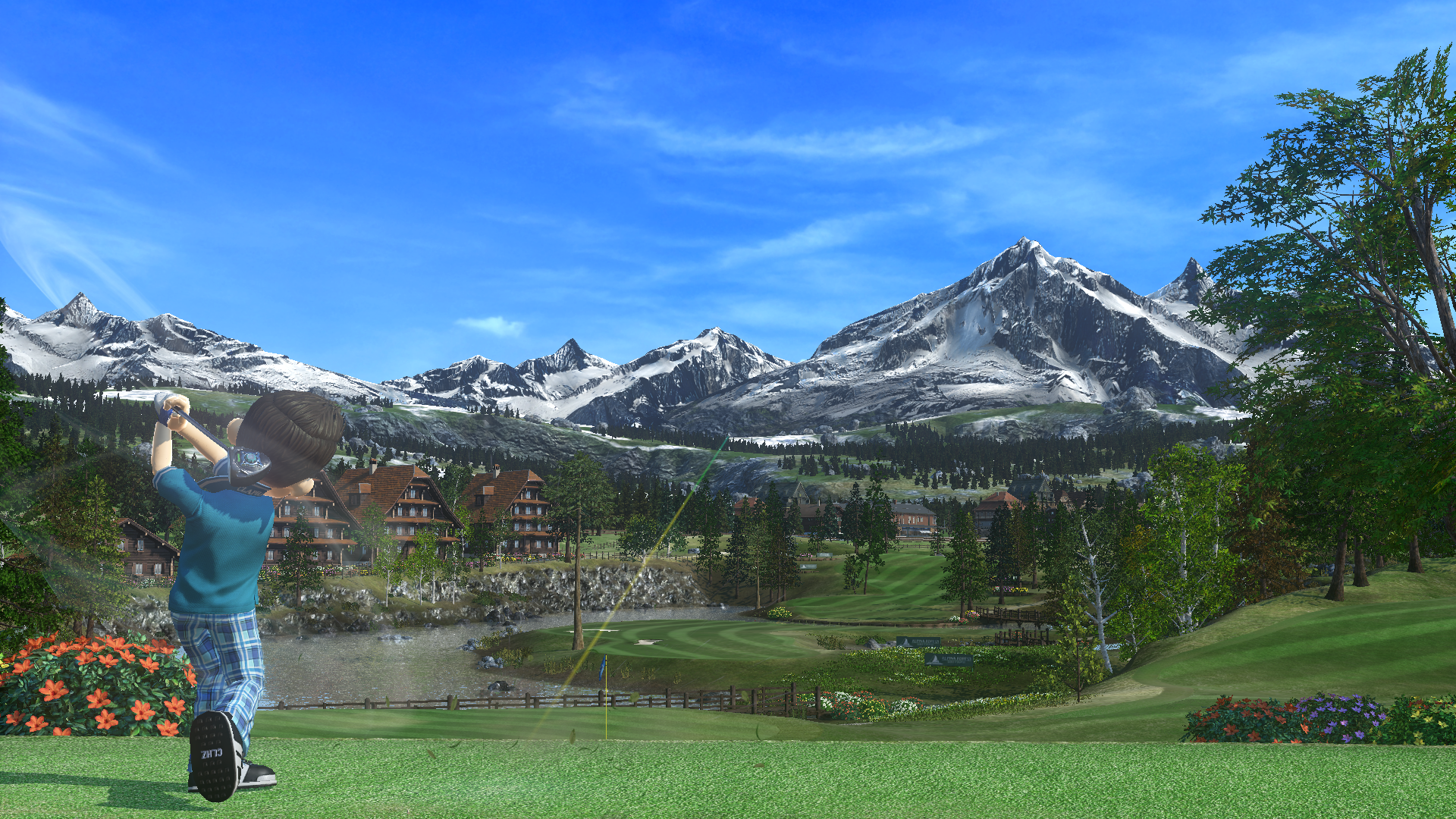 The visual concept of the series is retained in Everybody’s Golf, but somewhat less animated. Yes, the characters look like anime representations of humans and are created like Mii’s were for Nintendo, but there are some stunning shots that almost come off photo-realistic thanks to the phenomenal lighting. An overlay of the course with the water and the reflection of the sun almost aren’t fitting of the cartoon-ish characters. Clap Hanz did an excellent job of bringing the look of the series to the PS4. During the game, though, the HUD gets frustrating. It literally took me two days to realize there is a flag on the hit meter to let you know where it’s at. Also, at times there can be a better club selected, but it blends in with the rest of the menu. The more you play, you’ll become more accustomed to the HUD, but it could have been easier on the eyes. I had issues confusing which shot I’m on with what position I was in; they are literally right next to each other.

The sound adds to the anime/Mario Kart theme of the game. Players giggle and give hoorah’s as the voice acting is very Japanese-inspired. This is nothing new to the series, though. The music fits the look of the game and never becomes an issue. The sound effects match the animated feel that Everybody’s Golf creates. Sinking a putt uses the speaker on the DualShock 4, which is a nice touch. Honestly, all sound effects should have used the speaker. 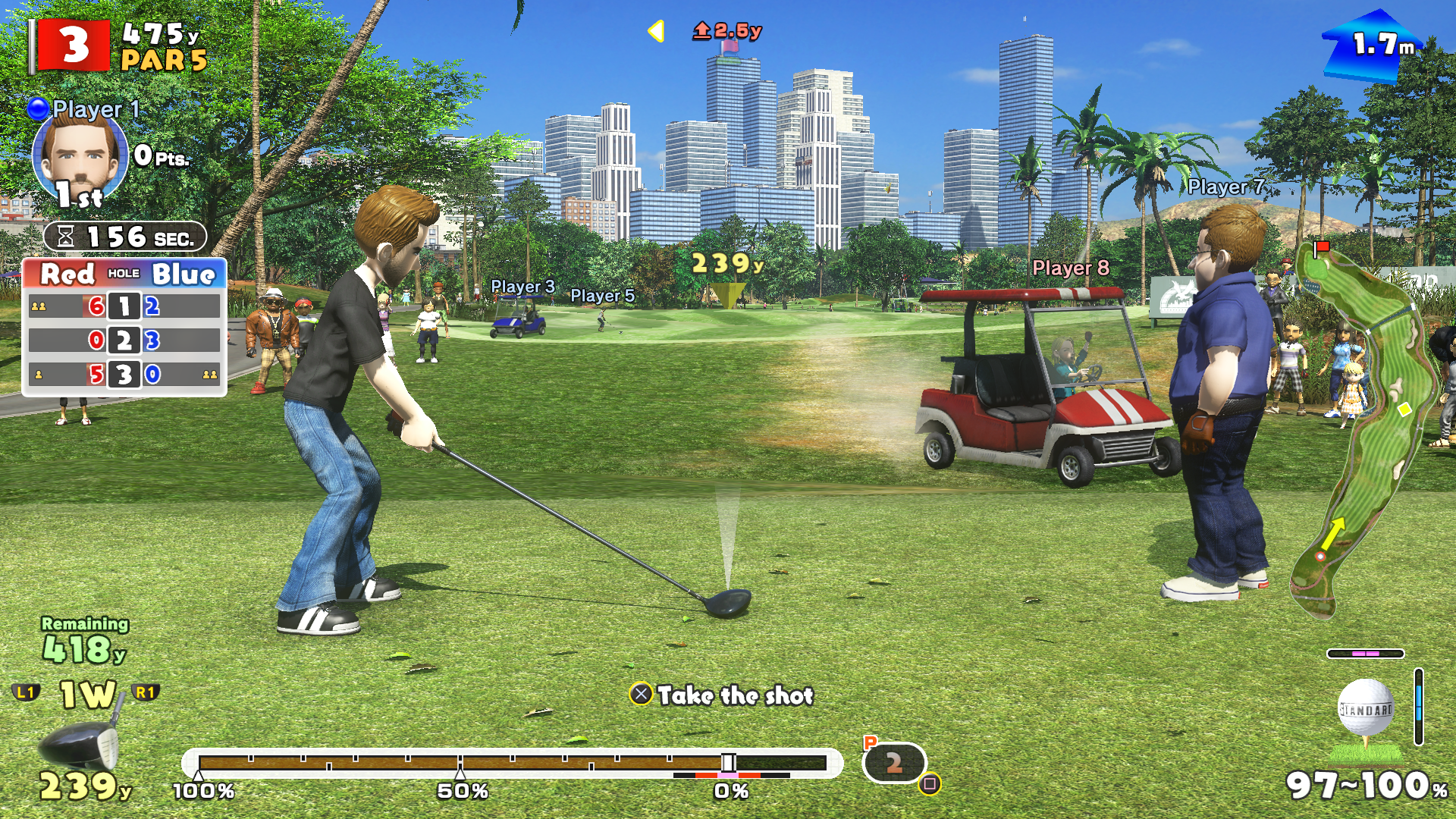 Clap Hanz’s effort to evolve Everybody’s Golf is a successful way of thinking outside of the box. While there aren’t a ton of modes, there’s enough here to keep players coming back for more. Keeping its challenging and addicting gameplay, Everybody’s Golf manages to blend frustration and enjoyment successfully. The online aspect has no hiccups and it’s easy to play with other people. Turf War is extremely hectic and fun at the same time. Clap Hanz took full of advantage of the technology that the PS4 offers to create the biggest leap of the series and offering fresh new innovations. Not to mention, you can literally fish.