An Oath to the Stars

Hoshiko was tooling around on patrol in her giant robot suit one day when her best friend, Chiyoko, opened fire and dropped her in the ocean.  There are two paths one can take when something like this happens, and Hoshiko turned out to be the kind of person who automatically assumed someone she knows and cares about turned evil and tried to kill her.  The only logical step from there is to swear revenge after roughly two second’s thought and fly off to get it, cutting through waves of enemies and dense bullet patterns along the way.  Hoshiko may be paranoid and harshly judgemental, but she’s a good mech pilot and it doesn’t seem likely her former friend will have a good enough explanation to avoid a showdown.

An Oath to the Stars is a vertical danmaku shooter with a simple scoring system and complicated bullet patterns.  Each enemy adds a bit to a combo meter, which tops off at 5x, and while there’s a cool-down period if you stop killing things, the screen is rarely empty enough for that to be an issue.  Death resets it to 1x, but otherwise you’re killing things to top it off and then falling into the habit of thinking of the 5x bonus as standard scoring.

The mech comes armed with a standard gun that shoots four bullets per shot, plus a laser that gets more powerful the closer you are to the enemy.  Both the standard gun and laser fire straight ahead, not a bit spread to either, but the bullet patterns are twisty enough that you never need to worry too much about the line of fire.  Wherever you are you’re a target, so might as well have a focused beam of firepower.  Each destroyed enemy drops a yellow chip or two, which are dragged into the mech when you get near, and these are used to top off the laser’s energy gauge.  The laser has a good several seconds’ worth of fire in it before running out of juice, and the regular popcorn enemies drop enough to keep it topped up most of the time, but when you’ve got a couple of the bigger ships on the screen it can run out fast. 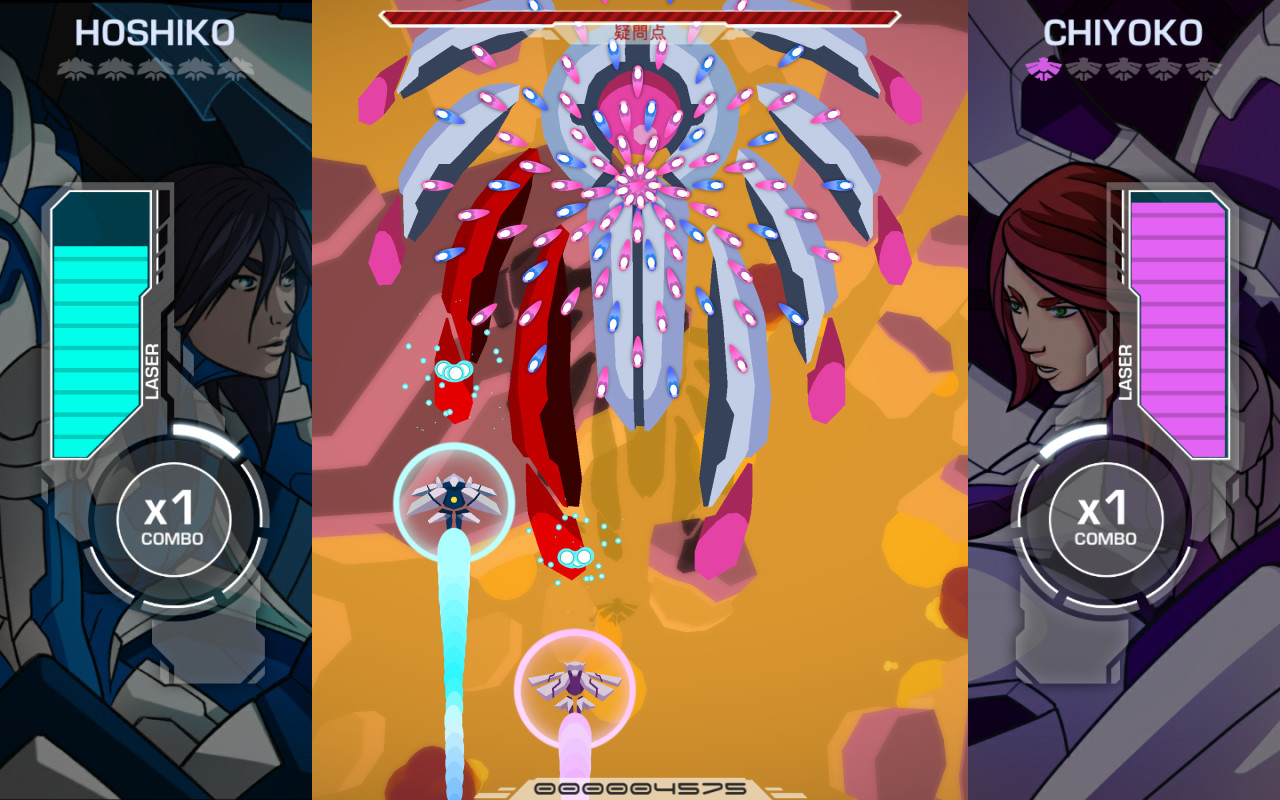 Which isn’t necessarily a problem, as it turns out.  While the laser is quite nice in close quarters, for anything but getting right in the enemy’s face it’s less effective than the main gun.  On level 4, for example, there’s a section where a large enemy shooting six lasers equally spaces around its diameter cuts the screen into smaller quadrants.  You want him gone fast to regain mobility, so out comes the big gun right in its face.  Then a stream of smaller enemies starts pouring down, each one of which gets in the way of the laser’s path just long enough for the next to get through.  Try to use the laser and you’ll die as the smaller enemies push it back, sacrificing themselves to take you out while the bigger enemy keeps you zoned.  Pull out the primary gun, though, and you’ve got four bullets to clear out the little guys more than quickly enough to also pound the bigger enemy into shrapnel.  Getting pushed back by the smaller enemies not only weakens the laser so it’s less powerful than the gun, its single shot is also less effective at crowd control.

And that’s pretty much the whole thing.  Enemies fire swarms of bullets, you’ve got a tiny hitbox so dodging is easier than it seems but still very difficult when the action heats up, one hit equals one death, three continues per level before Game Over.  No pickups outside of the yellow laser-gauge chips, no way to score big other than don’t die and kill everything.  Enemy patterns are simple even if the bullets get complicated, and the difficulty isn’t so much a curve as a wave that goes up and down at random.  Even the backgrounds in each level are a short strip of land repeated endlessly.  Despite how bare-bones everything is, the basic essentials of a decent shooter are in place.  The ship is a little slow but responsive, and once you learn the balance of the two weapons and put in a bit of practice you can tear through the levels while destroying almost everything in sight.  Assuming you don’t trip on a bullet-swarm, of course. 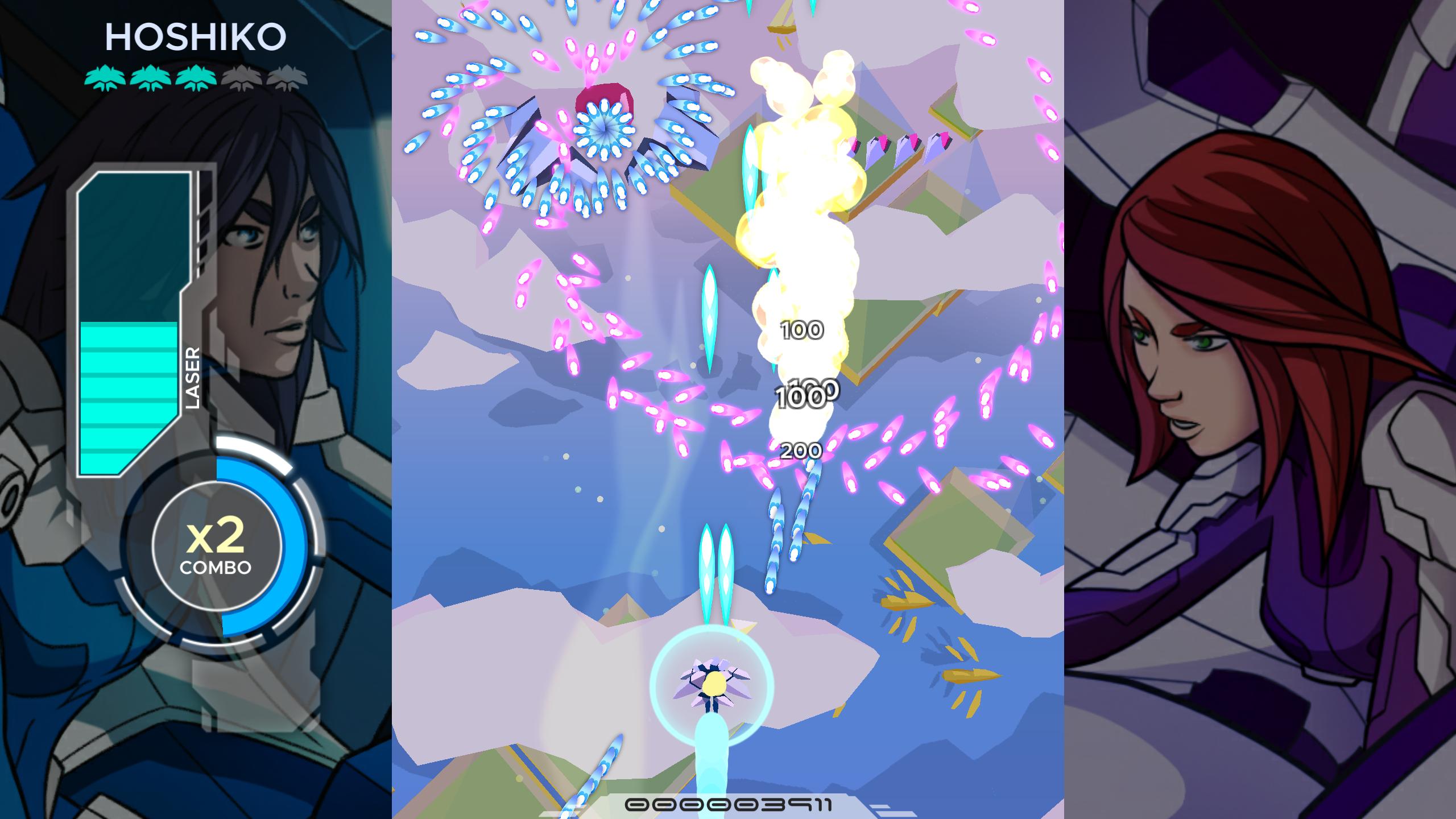 An Oath to the Stars is a fairly basic bullet-hell shooter, colorful and packed with swarms of firepower, but it never really takes off.  The levels don’t have much variety and the enemies become predictable.  Some of the bullet patterns just aren’t that fun to dodge, especially when they weave and pulse in patterns that are just a bit to hard to predict.  While the bosses are large and distinct, they’re also uneven in the difficulty, with the level 2 boss being the hardest in the game and the final confrontation being the second-easiest of the encounters.  There’s multiplayer plus four difficulty levels, with Inferno throwing out some truly insane patterns, but I found that once I’d cleared all levels in a single play and seen the predictable, unsatisfying ending I was done.  An Oath to the Stars needed some gameplay balancing, a better scoring mechanic and a complete rewrite of its story to become a really good shooter, but without that it’s just a semi-decent way to blow off an hour or two before playing something else.