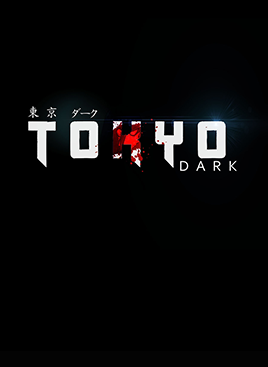 One of the things that has really given Square Enix Collective — the Japanese giant’s crowd-supported (not crowd-funded), indie-focused publishing arm — a boost to its identity is, ironically, its refusal to confine to one particular identity within its roster. From point-and-click adventures to first-person puzzlers to platformers to even competitive multiplayer, if the idea or the premise is interesting enough, chances are it’ll end up joining the label’s growing roster of entertaining yet enjoyably well-made games. Following on from the likes of Goetia, The Turing Test, Black the Fall & Oh My Godheads, developer Cherrymochi aim to keep this most refreshing of trends going with Tokyo Dark, a surprising mesh of east and west, of the traditional visual novels of Japan, combined with the point-and-click stylings of western PC adventure games.

Yet despite the clear visual emphasis — on its unabashedly contemporary anime visuals, coupled with the expected venturing through the medium’s more “notable” characteristics — Tokyo Dark is a game that presents itself with a bit more decency and perhaps restraint than your typical visual novel. And this is without going into detail (for the sake of story/plot spoilers) over its tackling of the Japanese capital’s less-glamorous and less-ritzy affairs. Whether it is indeed down to the tale being spun — veering back and forth between natural occurrences and the ocassional supernatural disturbance — or even its interesting fusion of gameplay mechanics, the most impressive thing could be the way Tokyo Dark doesn’t itself simply conform to a ready-made template preceding or simply try and reel its player in with shallow eye-candy or the like. Even at its most culturally prevalent — when one has to navigate the hyper-sweet gloss of a maid-themed cafe for example, ultimately clicking through sentence after sentence after sentence of deliberately incorrect grammar, for all its social/cultural authenticity — the game, still manages to look past its Japanese heritage to, important of all, allow the more Western-orientated ideas (notably the gameplay) to break through and thus shine.

Thus, one of Tokyo Dark’s brightest spots, despite its somewhat sinister aesthetic and omnipresence, stems from this borrowing from both extremes. Carving out a game that is of course about its character-led engagements — not to mention the situations that arise during the more tense set-pieces when a ticking-down dial indicates making the right choice is, therein especially, even more paramount — as it is navigating its allotted 2D environments. Deducing which solutions will not so much work, but will result in a more moral and ultimately psychologically-sound outcome. While the whole “think before you act” shtick has certainly been done to death by now and had a good kick-in while it’s at it, while Tokyo Dark’s general execution and presentation isn’t exactly ground-breaking (and certainly throws up some “interesting” UI decisions), it’s the thought put into crafting such moments of chin-scratching uncertainty one second and anxious peril the next, that prove the game’s worth. 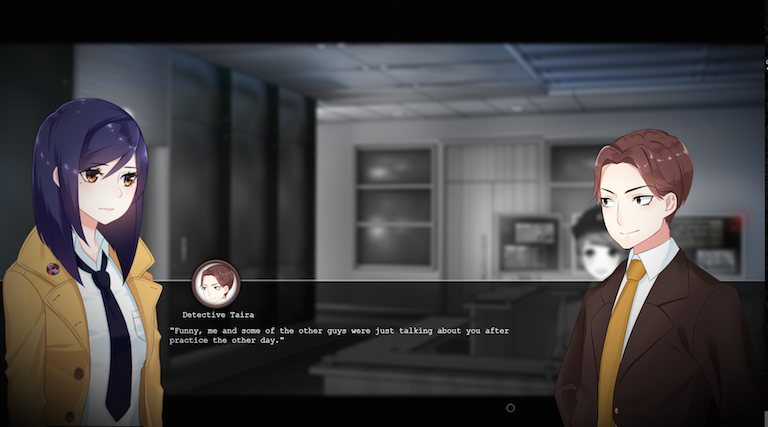 For starters, a lot of the game’s emphasis on consideration for one’s choices stems from (as much flows directly back into as a result) its in-game S.P.I.N. system. Representing the four meters of main protagonist [Detective] Ito Ayami’s Sanity, Professionalism, Investigation & Neurosis respectively, much like in a game of similar choice-based conundrums like Quantic Dream’s Indigo Prophecy, the mental state of the player-character becomes just as relevant, both inside and out of each separate scenario, as the very scenarios themselves. It’s clear that Tokyo Dark doesn’t mean to ease its players in with blatantly-easy dialogue options; the fact you can so easily make the wrong (if not disastrous) choice in early proceedings, thus sending one of your four meters closer to one of two extremes by deducting points — as opposed to adding some should you make the right/logical decision — showcases the game’s clever orchestrating of moral dilemmas for the player to ultimately determine what they themselves consider the “right” path.

That said, there are a few scenes/stand-offs at the more critical of moments that unfortunately deliver what does feel like a rather forced or otherwise restrictive dilemma. Particularly when the game switches back to its more sinister and horror-leaning tension whereby your character’s Sanity can really take a knock and even prove fatal if you hadn’t properly prepared beforehand. Luckily the game doesn’t cheapen the experience entirely to feel unfair as its numerous opportunities to learn more about the environment or indeed uncover more of the truth behind the case you’re attempting to solve, offers enough to the player without making proceedings feel too obvious to the point of feeling like a binary right/wrong outcome. 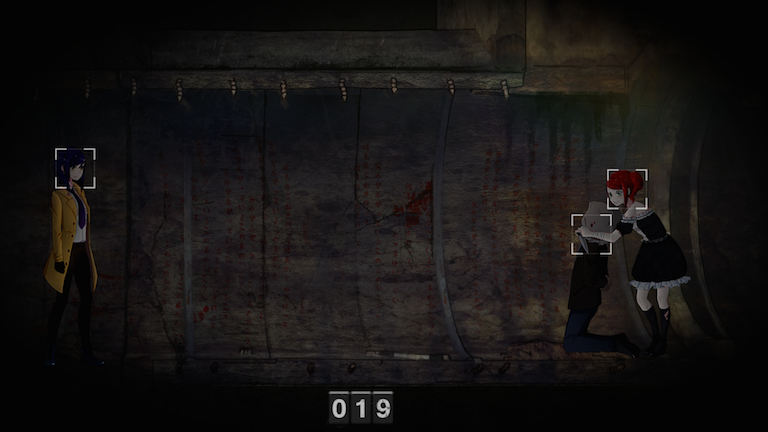 As a result, there’s a genuine satisfaction to be found when one takes a second to stand back for a second — to analyze what’s before them; work out the best route/ordering of items to interact with or characters to exchange dialogue with and thus, turn out a gratifying end result with minimal consequence. Or at least one hopes is minimal, for Tokyo Dark‘s vastly grey field of resulting actions and moves to make is by way of how immersed its player will be in the story. Less so perhaps with its characters — outside of Ayami herself and her charming no-nonsense attitude — but most certainly with the way it feels like each decision could prove critical or even be the point where one’s story will wildly deviate. They seldom do prove to be the turning point, but it’s Tokyo Dark‘s on-a-knife’s edge feel that keeps you stuck with the narrative and thus, eager to land the best outcome possible. And a lot of this positivity is generated because of how well, bizarrely, it manages to cloud the player’s perception, even deceive them into possibly being too casual or even too strictly-professional (in the context of Ayami’s detective/police background) during dialogue exchange.

Similar to a series like Deus Ex, there’s a hefty but welcome focus put on thinking over a character’s response/reaction let alone simply the right words one should use to reach instant success and interestingly, an over-reliance on talking to as many people as possible in as many ways possible ends up affecting the S.P.I.N. system — feeding back into in-game options whereby it restricts a players ability to scout out or investigate environments that may, in another light, come in handy. It’s a seemingly-endless loop of feedback and one that Tokyo Dark uses effectively to hammer home not just the idea of thinking before one acts, but also…quite simply…when best to act.

Naturally the game is not without its creases or figurative bumps in what is for the most part a fairly smooth and satisfying road to trek. Whether it be the fact you have to jiggle your character into the right spot for clickable interactions to appear on occasion, how small the dialogue text appears (even when set to its “large preset”), not to mention the [expected] appearance of an incorrect use of grammar or misspelt word, Tokyo Dark‘s passive elements aren’t perfect, but do their job regardless. Another minor gripe pertains to the quality of some of the background visuals, specifically the hand-drawn design of some NPCs, with character faces not holding the same level of detail or attention so clearly put into the remainder of the backdrops and environments. 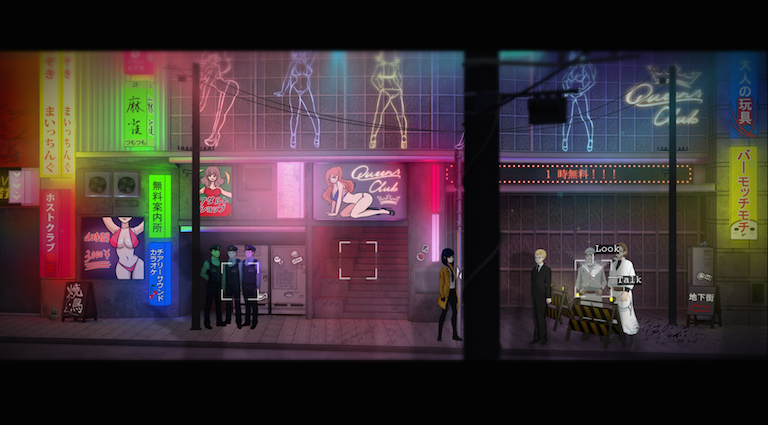 Overall, Tokyo Dark stands as yet another impressive and surprisingly gripping entry into Square Enix Collective’s portfolio of diverse titles, given its scale but more prominently its tone. One that executes the seemingly-impossible task of fusing the elegance of traditional point-and-click gameplay with the engaging story-telling of a visual novel. Doing so in a way that reaps the beneficial joy of both genres, yet still making sure to ask many a question to its player on what the next logical step should be. While it doesn’t re-imagine or reinvent the conventions, Cherrymochi’s take on the choice-driven style of play — fed notably through the lens of its uneasy Tokyo setting — makes this a must for either community. Be it those of the point-and-click sway, the visual novel variant or perhaps neither of the two. Because even if your decision in-game turns out to be the wrong one, there are plenty of twists and turns to discover in Tokyo Dark‘s hybrid of narrative and investigative gameplay to make the experience all that more focused, all that more perplexing, but ultimately, fittingly satisfying to resolve.