Crash landing on a strange planet would suck. There’s the feeling of isolation to handle and more than a little confusion on what’s safe or not on the unexplored rock. The heroes of Data Realms’ Planetoid Pioneers have got that covered. These stalwart adventurers come equipped with a device that can scan objects for blueprints, break them down for raw materials and build on the fly. This device serves as the centerpiece for progression in this physics based metroidvania style game.

Now, quite a few people hear “physics based crafting” and turn away from the subject so fast that they get a little dizzy. The two features have been so overused in games lately that they almost a synonym for “trend chaser.” That’s not the case with this title. Players are dropped on a giant round orb that is almost all black. It is up to the players to explore the interior of the planet to gather the required resources and plans to create a means of escape. As a planet is explored, the map opens up, something that is easily seen by zooming out. 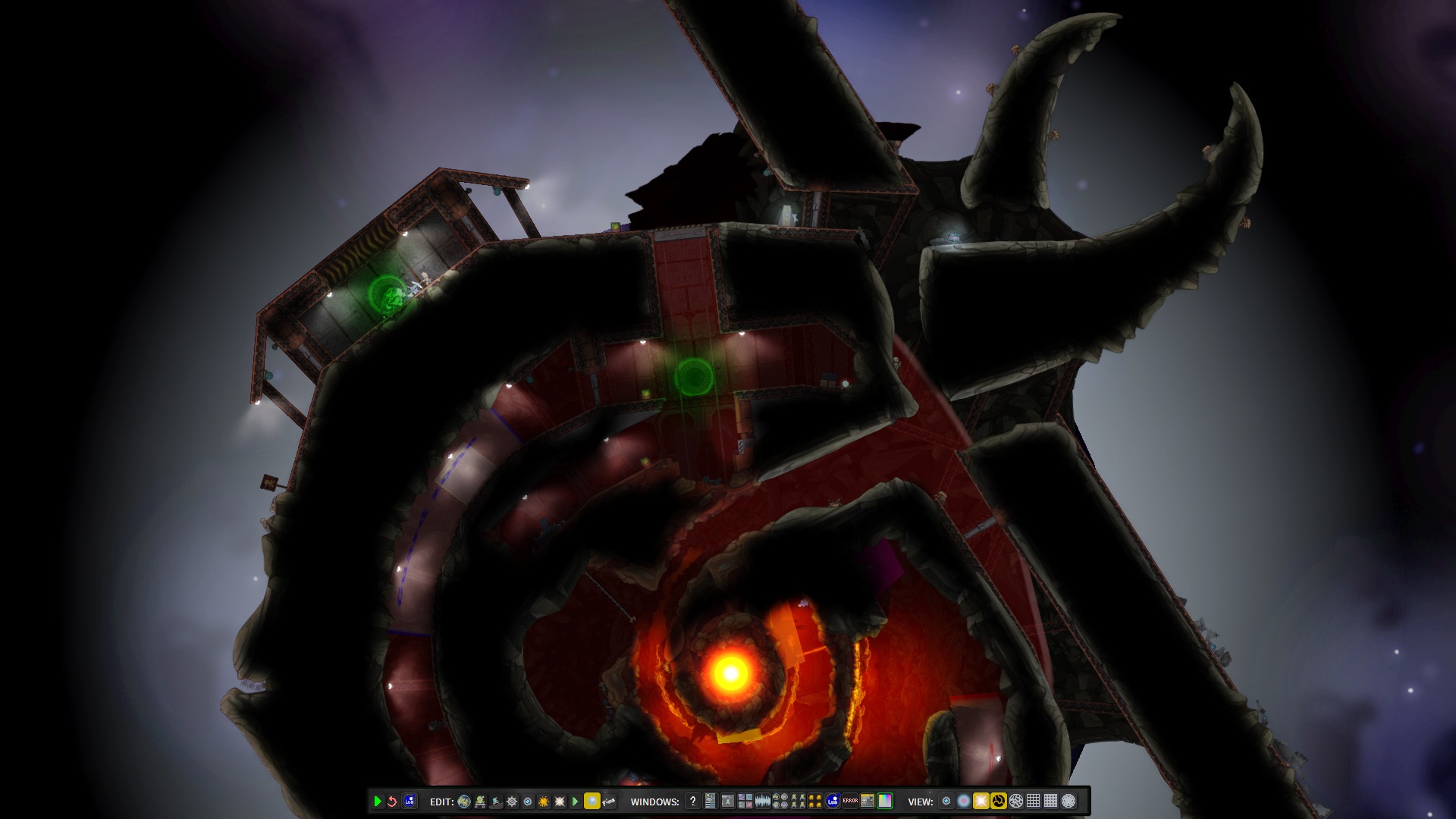 The metroidvania aspect comes into play from the scanning of expertly placed objects that can be used to solve progress impeding obstacles, much like gaining new powers that open up other areas. Unique to this game is the fact that there are multiple solutions to the same puzzle based on the physics engine. In Symphony of the Night, a player could only access a specific area by turning into a mist. Here, a player can use a ramp, build a stairway, or get weird with it to bypass the impediment. Experimentation is fun and easy, especially as resources can quickly be reclaimed from a poorly conceived creation by scanning the created object to break it down again.

Combat does also play a role. Unlike other games that depend on health bars to determine longevity, the player and his or her enemies aren’t defeated until a vital part is removed. Legs can be shot off of crawling bugs or bats can be de-winged, and they can still keep going. Only when the important piece, like a head, is destroyed, will they go down. It’s an interesting system that is both satisfying to use and forgiving for the player. A rock slide that should have killed me during the demo was survived because my head didn’t get crushed. 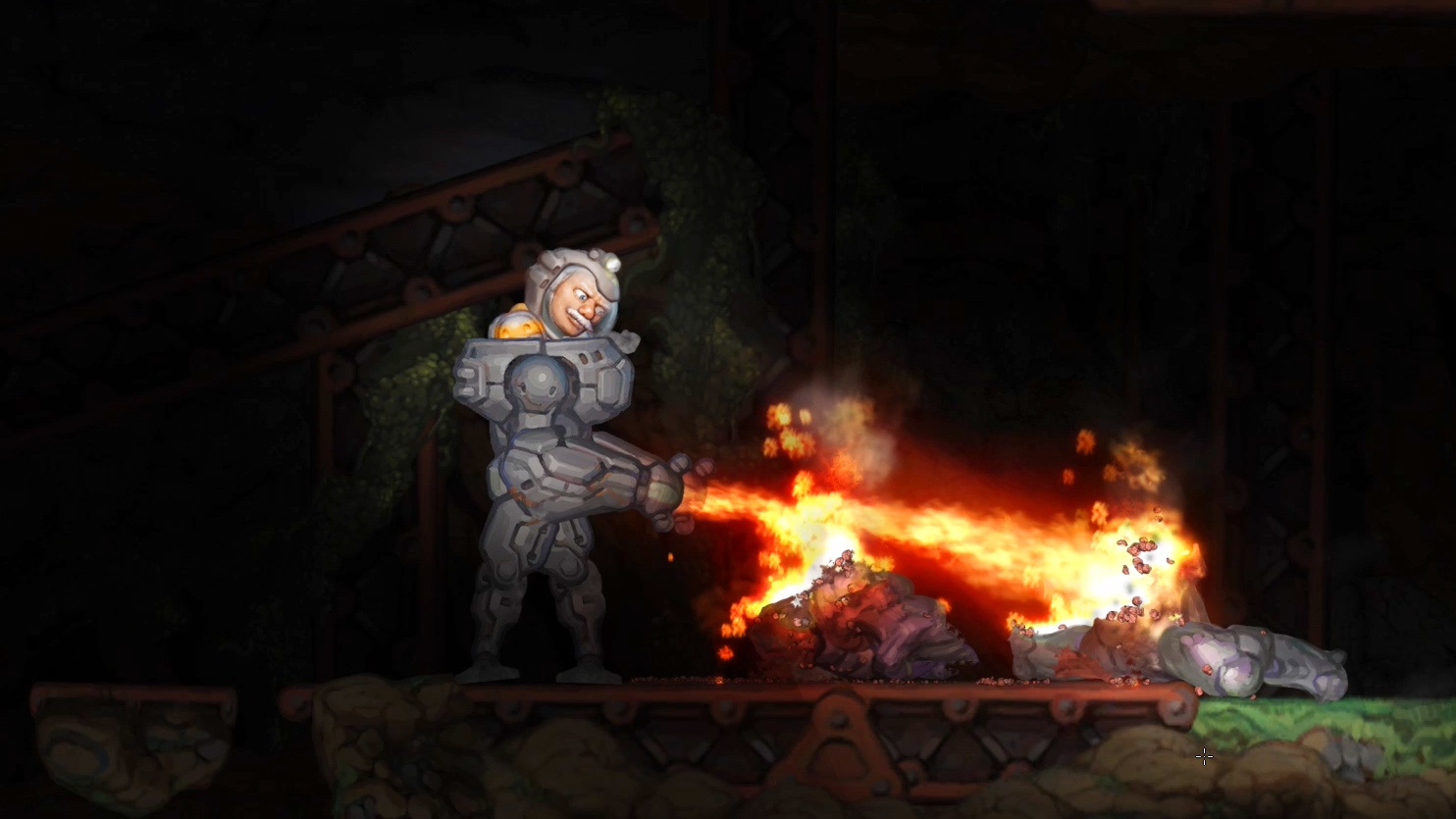 While the developer is building up a smart campaign that plays with conventions in interesting ways, they are also including an editor for the more creative minded players. It’s promised to be intuitive and quick to use, and they are really excited to see what will happen when players get some real time in with it. Unfortunately, I did not witness it in action due to the fact that I ran out of time playing through the prebuilt campaign.

I’ll be honest: I wanted to take a look at this game based solely on this developer’s previous game, Cortex Command. That game had a germ of a good idea that was fumbled worse than a greasy bar of soap. Because of its failed potential, I wanted to see what the developer took from the experience and if they have improved. They have. Planetoid Pioneers takes a strange, exaggerated physics engine, explained away by the gravity of a strange planet, and have built a new take on a classic genre. It looks weird in trailers and it plays weird, too. It’s a competent form of weird, though, that invites the player to delve deeper into a planet’s depths to see what they can find. The game is in Early Access right now, and this is one of those that is worth checking out ahead of completion.